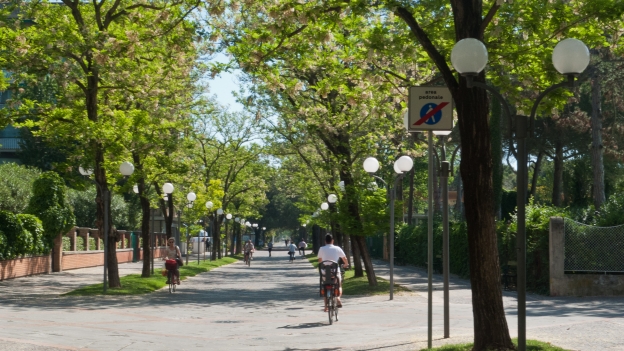 Bibione and neigh­bouring Lignano are a couple of the nicer seaside resorts of the area that would be good places to stop if you fancy some time on the beach.

From Bibione there’s a quiet road to San Michele sul Tagliamento and then on to Precenicco where there’s a pedes­trian bridge over the Stella river. The bridge is followed by a brief stretch of unsur­faced road and path - altern­at­ively, you could detour via Palazzolo dello Stella. The tour then heads for the coast - make a brief detour into the little fishing port of Marano Lagunare.

From Marano Lagunare there’s another detour away from the coast to the bridge at Villanova.

The route passes through the Torviscosa. The town was chosen in 1937 as the site for a huge complex for the production of cellulose and other chemicals used to make artificial fibres - hence the name: viscosa is Italian for viscose. Together with the nearby new town it is regarded as one of the most impressive urban and indus­trial devel­opment projects of inter-war Italy. There’s more inform­ation (in Italian) on the history of the town, and some photos on the Comune di Torviscosa website.

A new road bridge takes you over the rail line, there’s then a brief stretch on the busy SS14 before you pick up the cycleway at Cervignano del Friuli. From here the cycleway (part of the FVG1 - Ciclovia Alpe-Adria Radweg) heads for Aquileia and Grado.

At this point, if you have time, you might want to make a shortish detour north on the cycleway to the inter­esting city of Palmanova. Built at the end of the 16th century by the Venetian Republican designed by the military architect Giulio Savorgnano in response to the expansion of the Ottoman empire. This town was built as a fortress in the shape of a nine-pointed star. In between the points of the star, ramparts protruded so that the points could defend each other. A moat surrounded the town, and three big, guarded gates allowed entry

Although the town was founded in 1593, its construction took about a century to complete. Once finished, it was regarded as perhaps the best-protected fortress in Europe. Ironically, it never saw a battle, and Napoleon captured the city without a fight in 1797. 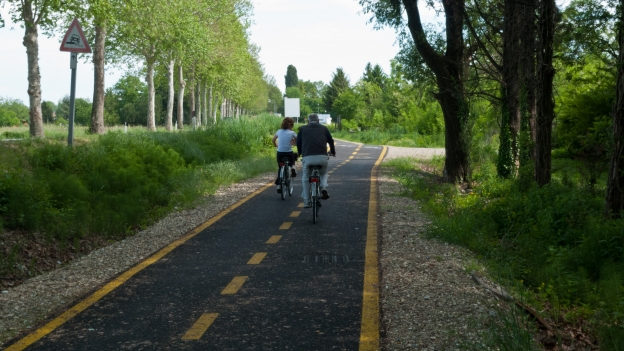 Next stop is the UNESCO World Heritage site at Aquileia. Well worth seeing but not too much to take in. Aquileia was an important city in the Roman empire before it went into decline as its port silted up and it was sacked by the Huns. It was given its UNESCO status partly because many of the remains of the Roman city have not been excavated. But you can still stroll along the old quayside listening to the chorus of croaking frogs. 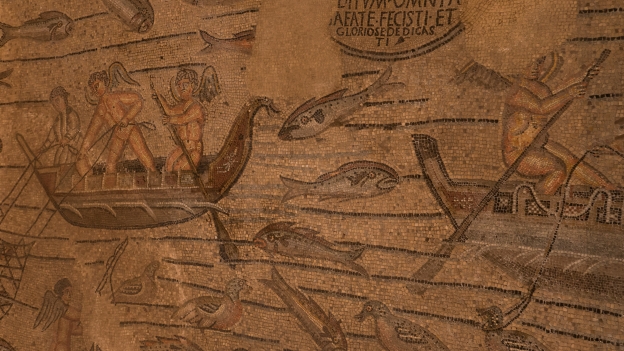 The main sight is the basilica and its mosaic floor. The floor dates back to the fourth century and has been preserved pretty much intact - thanks to the fact that when a newer floor was put in, the old floor was covered with aggregate rather than being ripped up. Look out for fishes and herons; Jonah both being swallowed by a sea monster and then spat out; and the chicken and the turtle (symbols of good and evil - which seems a bit hard on the harmless turtle); and the good shepherd and the fishermen. There’s a lot that you can see for free - but unless you are on a really tight budget splash out for the ticket for the cripta dei scavi and the cripta dei affreschi.

You could see Aquileia as a brief-ish stop before heading on to Grado, however, there’s a very nice campsite (as well a hostel and hotel) so it’s worth consid­ering as an overnight stop.

The ride over the causeway to Grado is lovely. I went over at what seemed to be low tide - but given that the tide-tables show the difference between low and high tide in terms of centi­metres it could well have been high tide.

Grado is a mainly modern seaside resort and busy little fishing port - leafy with lots of places to eat. There’s a small centro storico (the city has a long history and was once a rival to Venezia).

The major connection on this section is with the FVG1 Ciclovia Alpe-Adria Radweg which connects Grado on the coast with Salzburg in Austria. 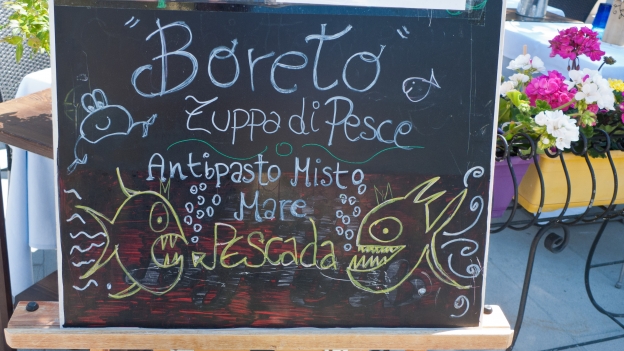 There’s a hostel in Aquileia: the Domus Augusta Hostel

The campsite at Aquileia - Camping Aquileia - is a delight. Plenty of mature trees but not gloomy and a very nice pool. They offer a special rate for ‘bikers’ (10€ - instead of 16€ for one person).

There are plenty of campsites and hotels in and around Grado.

There are rail stations at Torviscosa and Monfalcone