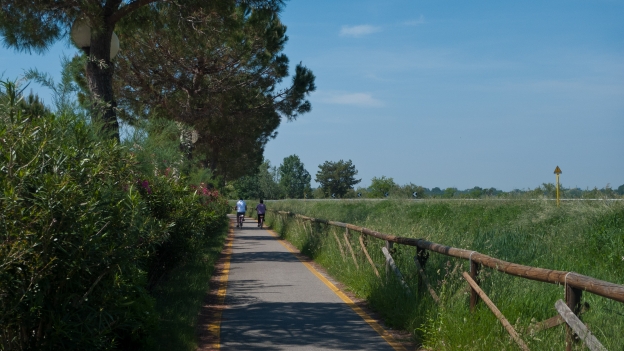 Part of the FVG2 cycleway near Grado (Friuli-Venezia Giulia)

At Grado you pick up the signed FVG2 Itinerario del Littorale which follows the strada provin­ciale passing the Cavanata nature reserve for a while before turning off to follow the coast ending leading to a beautiful stretch along the Lido dei Conchiglie (shells).

At Caneo take the bridge over the Isonzo river. After the sign there’s turning for the Isola della Cona (more inform­ation on turismofvg.it). This is a fairly rough track but perfectly rideable (altern­at­ively you could detour round following the signs for the Isola). The isola has a visitor centre with rifugio escur­sion­istico (hostel for hikers and birdwatchers) as well as a bar and toilet. From the bar’s windows, you should also be able to see some of the centre’s Camargue white horses grazing. Look out for the signs warning you not to squash the frogs and toads as they cross the road. Note: since I visited, there has been a change of management so I would contact them in advance for inform­ation about the rifugio if you are thinking of staying there. 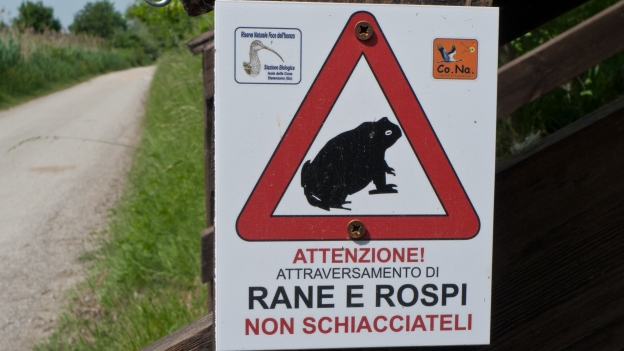 From here a quiet road takes you into Monfalcone (close to the region’s airport at Ronchi dei Legionari). Between Monfalcone and Duino there is no altern­ative but to take the SS14, but this section wasn’t too bad when I rode it, and it quieter after a couple of kilometres as through traffic goes off to join the motorway.

Turning the corner and starting to head south-east towards Trieste the landscape changes abruptly: the flatlands give way to the dramatic cliffs of the coastline of the Golfo di Trieste (although the change in altitude is not that big). At Duino you have a choice of routes, you could take the strada provin­ciale to Trieste - this is quieter and has some great views as you descend into the city. I’ve opted for the lovely corniche road with views over the gulf and of the Castello Miramare (‘Seaview Castle’ in English doesn’t have quite the same ring) a shiny white Gothic castle on a headland. 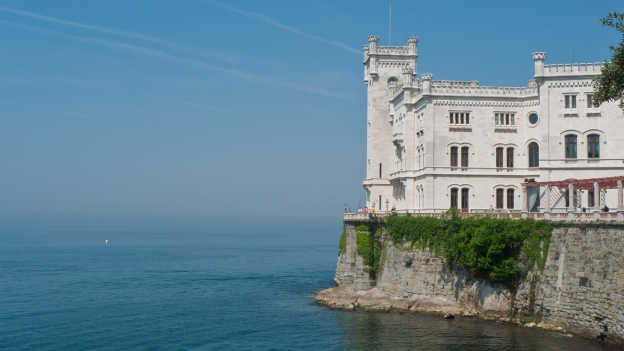 The castle was built for the Archduke Ferdinand Maximilian - younger brother of the Emperor of the Austro-Hungarian empire. Maximilian was persuaded by Napoleon III to proclaim himself Emperor of Mexico. He was eventually defeated and shot, and his wife went insane. And the moral of the story is that if a man called Napoleon offers to make you emperor of somewhere, think long and hard before saying ‘yes’.

The castello forms part of a larger park which seemed to be free to visit (you have to pay to visit the castle itself). NB you can’t ride a bike in the park but there didn’t seem to be any objec­tions to pushing a bike.

There’s a youth hostel close to the castello (the Ostello Tergeste). I didn’t stay there but it’s in an imposing nineteenth century villa with a great seafront location. Probably a very good bet if you want to do some sight­seeing in Trieste, which is a very manageable short bike ride away.

From Castello Miramare the road follows the coast at sea level into Trieste. At weekends the road is popular with local cyclists. It’s a wide road and relat­ively busy, but has a broad shoulder so presents no real problems. You could in theory ride along the promenade, but when I took this road (on a sunny Saturday morning) it was full of sunbathing Triestini who had command­eered it as an informal beach.

Trieste was built to provide a port for the Austro-Hungarian empire. As a trading city at the gateway to a multi-lingual and multi-ethnic empire (its most famous (adopted) citizen was James Joyce). It was taken by Italy at the end of the first world war. While for the empire, Trieste had been a crucial gateway to the sea, for Italy it was just another port - and a port located a long way from Italy’s indus­trial heart­lands. Its economic decline was mirrored by cultural decline as a policy of Italianisation meant that it lost much of its diversity (Joyce himself had left for neutral Switzerland when Italy joined the war). Its decline was reinforced by the division of Europe after the second world war.

Another famous author to come out of imperial-era Trieste was Italo Svevo. His pen name means Italian-Swabian: he was born a citizen of the Austro-Hungarian Empire and became a citizen of the new republic of Italy, all without leaving his home city of Trieste. If he had lived a few kilometres outside Trieste he might, in turn, have become a citizen of Slovenija. (Trieste, Joyce and Svevo, inspired one of the 2016 BBC Reith lectures: Mistaken Identities by Kwame Anthony Appiah).

With the end of the Iron Curtain the port and the city are enjoying something of a return to its former importance.

The main road takes you along Trieste’s imposing water­front with its magni­ficent squares looking out to see and you defin­itely get a sense of a great maritime city (it reminded me of the grander parts of the Liverpool waterfront).

You can continue on from here to Muggia and then beyond towards Slovenia and Croatia (see eurovelo 8 in Italy. There’s a vaporetto service across the golfo if you’d rather avoid the traffic in Trieste. 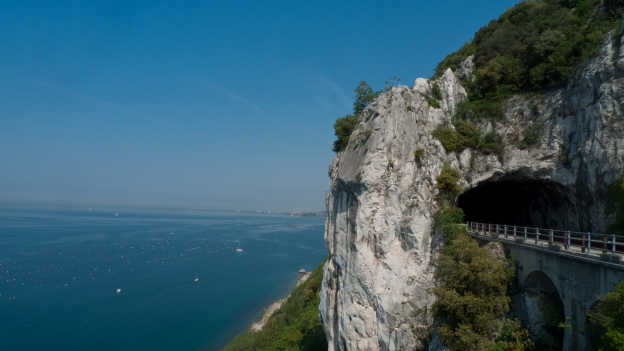 The coast road to Trieste

Trieste’s Ostello Tergeste, possibly one of Italy’s best located hostels, is on the seafront very close to the castello.

There are campsites at Duino, a couple in and around Trieste and another on the coast between Trieste and the border with Slovenija.

There’s a train station at Trieste and there are ferry services to Patras and Igoumenitsa. The airport is near Monfalcone and within easy reach of the route. 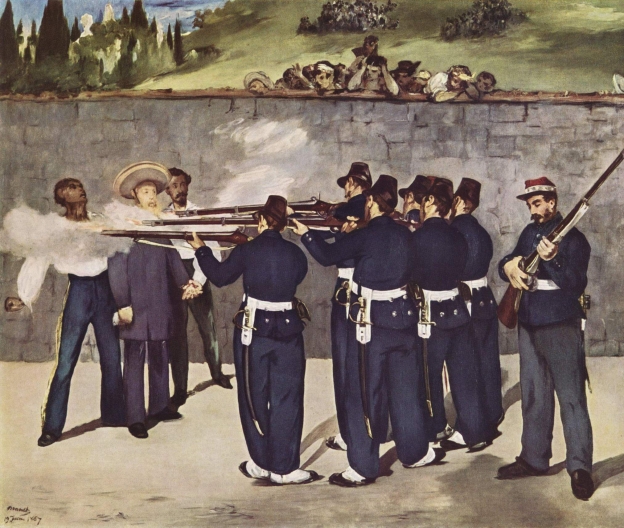 The Execution of the Emperor Maximillian by Édouard Manet. The Yorck Project via Wikimedia Commons. Kunsthalle Mannheim.