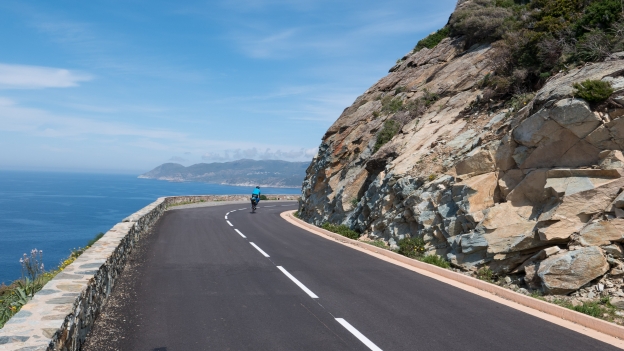 Moderately challenging. There are no really big climbs along the route, but there are several that take you from sea level to more than 350 metres altitude. The smaller climbs can also add up.

The route is mainly on roads that, outside the main tourist season are quiet. However, there are sections where there is no altern­ative to using the former routes nationales. The volume of traffic isn’t great, but it is relat­ively fast moving. The worst section is around Ajaccio, but this can be avoided with a detour.

The route is entirely on surfaced roads. Although the road surfaces are generally good there is one section where the surface is in poor condition. The section is perfectly rideable, but you need to pay attention if you are descending at speed.

This is not a signed cycle route, but it’s easy to find your way using the normal road signs.

Best times to go are spring (April-June) and autumn (September-October). Note that if you are planning to camp you may find that many campsites are still closed in early April and many close at the end of September.

Definitely don’t go in the main holiday season of July and August — not only will it be hotter, but the roads busy with tourist traffic.

Corsica is one of the world’s great cycling destin­a­tions. It deserves a place on every­one’s list of places to go before their knees give out. The main highlight is the coastline of the north-west around Porto, which deserves to be called spectacular. The rest of the route is pretty glorious although the dramatic bits are so dramatic that the rest suffers a little in comparison.

This route works best as a part of a longer tour taking in Sardegna, but you could do it on its own, or returning to the starting point in Bastia. 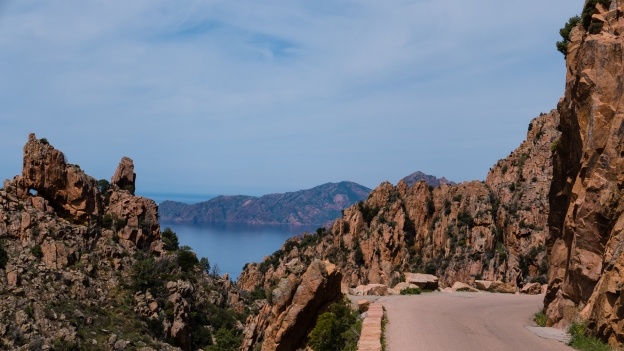 The Calanches de Piana: highlight of the Corsican coast

The route passes some of Corsica’s best beaches, but note that some of these beaches have stayed relat­ively unspoilt because they are accessible only by rough dirt roads. This is partic­u­larly true in the north of the island; in the south-west of the island, there are some beautiful beaches that are much more easily accessible.

Best beaches along the route

Note that in most cases there’s no lifeguard at the beach, and many of the beaches you come across (not those on this list) there are warnings that swimming is dangerous. 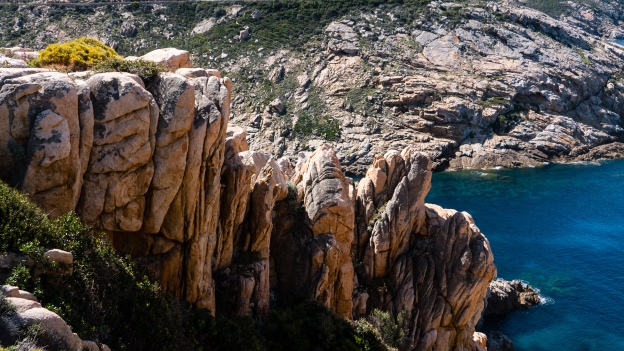 Rock forma­tions on the coast between Calvi and Galéria

You coulddo the route in either direction, but is anti-clockwise better so that you are on the side closest to the sea and you can most easily enjoy the views.

If you don’t have time to do the whole route then you could travel into Bastia and out of Ajaccio. Alternatively, you could climb to the Col de Vergio (1432 m) before heading for Bastia. It’s a big climb as you start at sea-level. Whatever you do, though, don’t miss the Calanches de Piana.

If you need to, then you could also travel into Calvi or Île Rousse and then out of Ajaccio.

A lot of people do, but be warned the main road along the eastern seaboard of the island is flat, busy, and very boring. A better altern­ative would be to head from Sartène through the Alta Rocca to Zonza and the Aiguilles de Bavella. From there are stretches of corniche road in the heights above the new main road, which offer a much quieter and more scenic alternative.

There are frequent and quick ferry services across the strait between Corsica and Sardegna so it couldn’t be easier to combine the two islands —for example following the coast of northern Sardegna to Alghero or to Olbia. For more about cycling the Sardinian coast see these articles: 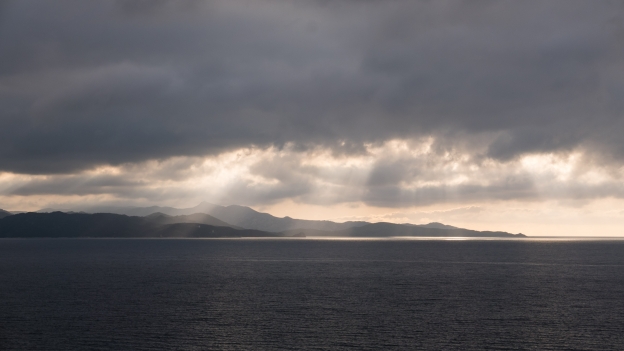 A couple of warnings

Corsica is one of the most sparsely populated areas of Europe. Although you are never really very far from the nearest town, services along the road can be few and far between: so it’s worth making sure you have enough water and something to eat.

Wild camping is defin­itely not permitted that’s partly because of the risk of forest fires (which can do serious damage, and firefighters have lost their lives fighting them). What may seem to be a nondes­cript bit of sand dune can be a fragile habitat, and while you may be conscien­tious about leaving no trace, sadly there are a lot of people who aren’t.

The main airports are at Bastia and Ajaccio (although there is also an airport at Figari in the south). Many airlines (including Easyjet) only operate services in summer - so if you are researching flights in winter it may look like there are no flights. visit-corsica.com has a useful search engine visit-corsica.com: comment venir covering 14 countries.

If you are travelling from outside Europe then the easiest option is likely to be to change planes in Paris. Air France has a low-cost subsi­diary called Hop! which operates services to and from the island’s airports (although I couldn’t see any services from, or to, Paris CDG).

The major ferry companies are Sardinia Ferries/Corsica Ferries and Moby Lines, with services from Nice, Toulon and Marseille in France, and Genova, Vado Ligure and Livorno in Italy. The main ferry ports are Bastia and Ajaccio but there are also ferries to/from Propriano. 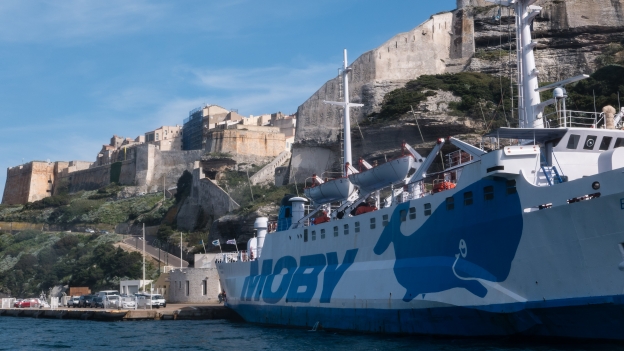 At the end of the route there is an airport at Figari near Bonifacio. In summer it offers a range of low-cost and charter flights to mainland France and elsewhere in northern Europe. However, you can broaden the range of options by taking the ferry to Santa Teresa Gallura in Sardegna and then continuing to either Alghero or Olbia. Alternatively, there are ferry services to mainland France (Marseille, Toulon or Nice) from Propriano and Porto Vecchio.

A warning about trains

The railway company (Chemins de Fer de la Corse) has a prominent warning on its website front page that bikes are not allowed on the trains, this includes bikes that are in bags or boxes —making it perhaps the least bike-friendly rail company in Europe. (‘Les vélos né sont pas acceptés à bord des trains (avec ou sans emballage)’). 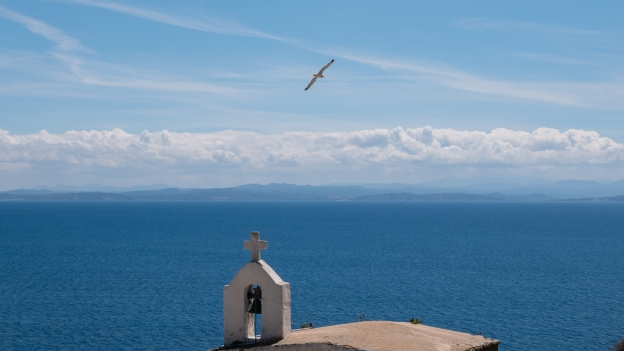 Bonifacio: Chapelle de Saint Roch with Sardegna in the distance

The main tourist inform­ation website is visit-corsica.com. It’s available in 9 languages. There are also local and area tourist offices - links in the individual sections.

For inform­ation about cycling, including a selection of routes, in Corsica try Corsican Cyclist (en/fr).

If you’re inter­ested in camping then the go-to resource is paradisu.info which has a compre­hensive section on campsites paradise.info: campsites. It’s not clear how up to date the section is, but for each of the campsites covered there are a load of pictures that will give you a pretty good idea of what it is like.

Freewheeling France are a travel agent who will organise your tour for you. 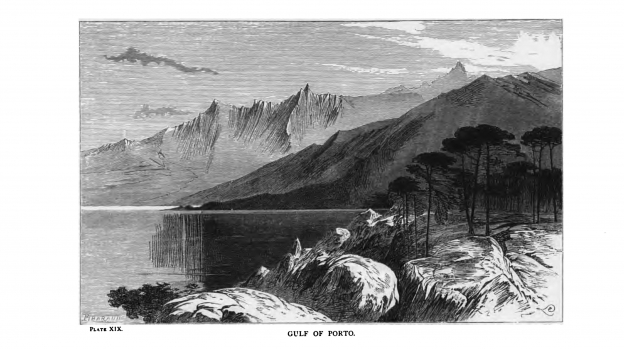 Gulf of Porto by Edward Lear. Illustration from Journal of Landscape Painter in Corsica from the archive.org 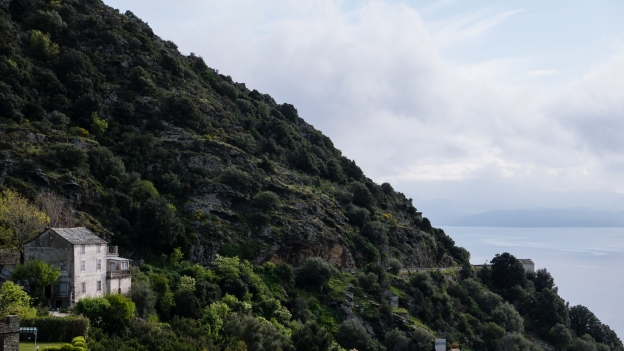