This section of the route takes you from Civitavecchia to Cerveteri with its Etruscan necro­polis (listed jointly with Tarquinia as a UNESCO World Heritage site). From there it skirts around the Rome’s Fiumicino (Leonardo da Vinci) airport before coming to the town of Fiumicino at the mouth of the Tevere (Tiber) and continues to the seaside resort of Ostia. Nearby is Ostia Antica the port of ancient Rome.

From Civitavecchia the Via Aurelia (no longer a dual carriageway) follows the coast via the seaside resort of Santa Marinella and on towards Ladispoli. The road is still quieter as here as through traffic turns off and takes the motorway.

On its way, the Via Aurelia passes Pyrgi. There’s not much to see there now but there was once a major Etruscan temple here that was sacked by Greeks from Syracusa

Again you have a choice between heading for the Cerveteri and its Etruscan necro­polis and museum, of continuing on via Ladispoli to Fiumicino and Ostia.

Although it’s only a few miles south along the coast from Tarquinia, Cerveteri has a very different feel: the tombs are above ground and you can walk along the streets between them.

“ There is a stillness and a softness in these great grassy mounds with their ancient stone girdles, and down the central walk there lingers still a kind of homeliness and happiness. True, it was a still and sunny afternoon in April, and larks rose from the soft grass of the tombs. But there was a stillness and a sooth­ingness in all the air, in that sunken place, and a feeling that it was good for one’s soul to be there. ”

I didn’t spot any larks but otherwise Lawrence’s description from 1927 still captures the feel of the Banditaccia today. 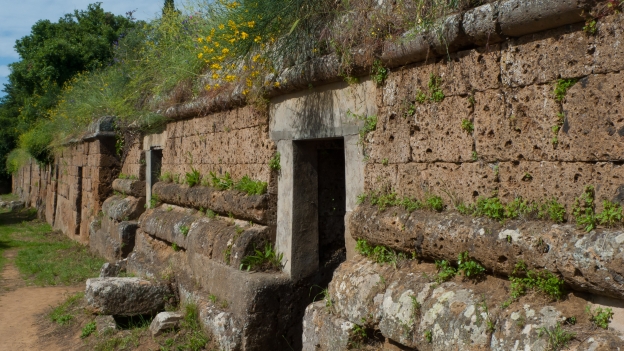 While the tombs in Tarquinia are protected by glass doors, in Cerveteri you can walk into the tombs and have a look around. The necro­polis is a testament to the skills of the Etruscan stone­masons with some of the circular tombs seeming to be carved out of a single piece of stone.

Probably the star of the show is the Tomba dei Rilievi, its walls covered with carvings of a variety of objects - including swords and shields and a small dog.

The museum at Cerveteri is one of the best in the region and includes some very clever inter­active holographic displays (so clever I needed a member of staff to show me how to use them). Sadly, for the museum most of the master­pieces from the Cerveteri are on display in the Villa Giulia and the Museo Gregoriano Etrusco in Rome. This includes the Sarcofago degli Sposi (sarco­phagus of the husband and wife) - perhaps the greatest master­piece of Etruscan art - as well as a fabulous haul of Greek vases. 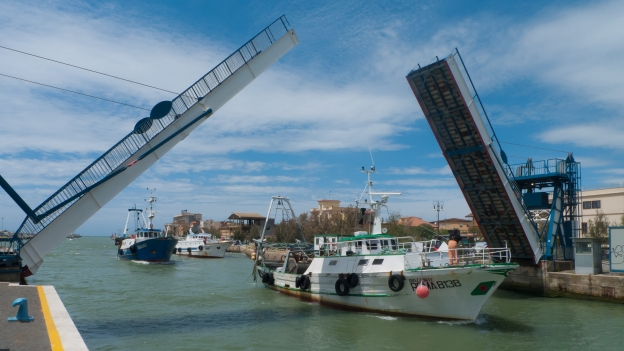 The Tevere (Tiber) at Fiumicino

The route takes you on relat­ively quiet roads on the seaward side of Rome’s L airport - more commonly known as Rome Fiumicino. Fiumicino itself is a little town at the mouth of the Tevere (Tiber). The quayside would be a nice place to have lunch.

A short ride from Fiumicino takes you to Ostia. Ostia is also the nearest beach to Rome. Much of the coastline is occupied by stabil­menti balneari (bathing estab­lish­ments - Google ImageSearch results).

Many of these were estab­lished under the Mussolini period in a bid to encourage workers to parti­cipate in healthy leisure and sporting activ­ities. There’s a lido for the bus drivers and metro staff as well as for the airforce, and tax inspectors and customs staff. Look out for the Miami Lido - a modernist lido that has been stylishly restored and updated - for the staff of the Istat (national institute of statistics).

If you want to go for a swim or have a little beach time yourself then look out for a spiaggia lib era (literally a free beach). There are five at Ostia for more inform­ation (in Italian) check out ostiabeach.it

There’s a very funny video about a day out at Ostia beach:

You don’t need to be able to speak Italian, or the Roman dialect, to get the joke, but the chorus ‘la sabbia bruccia’ means the sand burns and the final straw for the long-suffering boyfriend is when the girlfriend asks him to fetch her bag. When he asks where it is she says ‘in the car’. ‘What do you mean in the car?’ he asks ‘We’re parked at Acilia” (several kilometres away). Well you can take the dog for company, she replies. ‘Non te scordar er drink’ is Roman dialect for don’t forget the drink.

Ostia Antica is the port city estab­lished by the Romans in its heyday it had a population of 100,000. It was a cosmo­politan city: people came from all over the Mediterranean to trade. The city was home to the oldest synagogue outside Israel. The went into decline as the coastline changed: the present-day coast is 3kms further from the coastline as it was in the Roman era. It was finally abandoned in the 8th century because of the diffi­culty of defending it against attacks from the sea by Saracen fleets. It was abandoned and covered by the sands. Visiting Ostia Antica you can get a sense of what ancient Rome was like.

Ostia Antica is well worth a half a day. The site is at least as important and inter­esting as the better-known Pompei. This video skilfully bonds footage of Ostia Antica as it is now with recon­struc­tions of how it might have looked at its height. With its huge warehouses and apartment blocks the recon­structed city has a surpris­ingly modern feel.

For inform­ation about ticket prices and opening hours visit the official website: ostiaantica.beniculturali.it.

You can get a helpful (free) pdf guide from ostia-antica.org a voluntary not-for-profit enthu­siast site (in English) direct download link: Ostia Antica Tourist Guide ). The site has lots of videos about the city.

From Civitavecchia there isn’t any altern­ative to the Via Aurelia (although at this point most through traffic takes the motorway). Without a doubt, the most scenic and inter­esting route through northern Lazio is a via the Lago di Bracciano and the Lago di Bolsena.

This route is probably of most interest if you want to visit Cerveteri and Tarquinia, but may also want to consider it if you are on a charity ride with a deadline or you need to get to Fiumicino airport to catch a plane.

If you are really in a hurry you could bypass Tarquinia and Cerveteri, and do the northern Lazio section in a day.

Bear in mind that that this route takes in a number of seaside resorts and in high summer (especially in August and at weekends, these roads are likely to get very busy. If you can, avoid travelling at weekends July and avoid altogether in August.

Yes staying overnight in Roma is appealing, but there are good transport links between the coast and the centre of the city. So staying on the coast and catching the train into town is a practical option.

Camping Internazionale Castelfusano. A nice site in a wooded area on the dunes. It’s reasonable value for money consid­ering the proximity to Roma. This is quite a good bet if you want to spend some time sight­seeing in Roma; the campsite is a shortish walk/bus ride (2km) from the metro line into central Roma meaning that it’s quicker to get into Roma from here than it is from campsites that are much closer.

There’s also an excellent train service between Ostia and Rome - this is part of the metro network and will get you into the centre of Rome in about half an hour. On Saturdays, and at certain times of the day you can take your bike on the train from the Lido see 060608.it

You should also be able to catch the regional trains into Roma from the stations at Ladispoli and at Maccarese.

Other resources about Ostia Antica

If you really believe in doing your homework, there’s a free online course on the archae­ology of Portus on futurelearn.com. 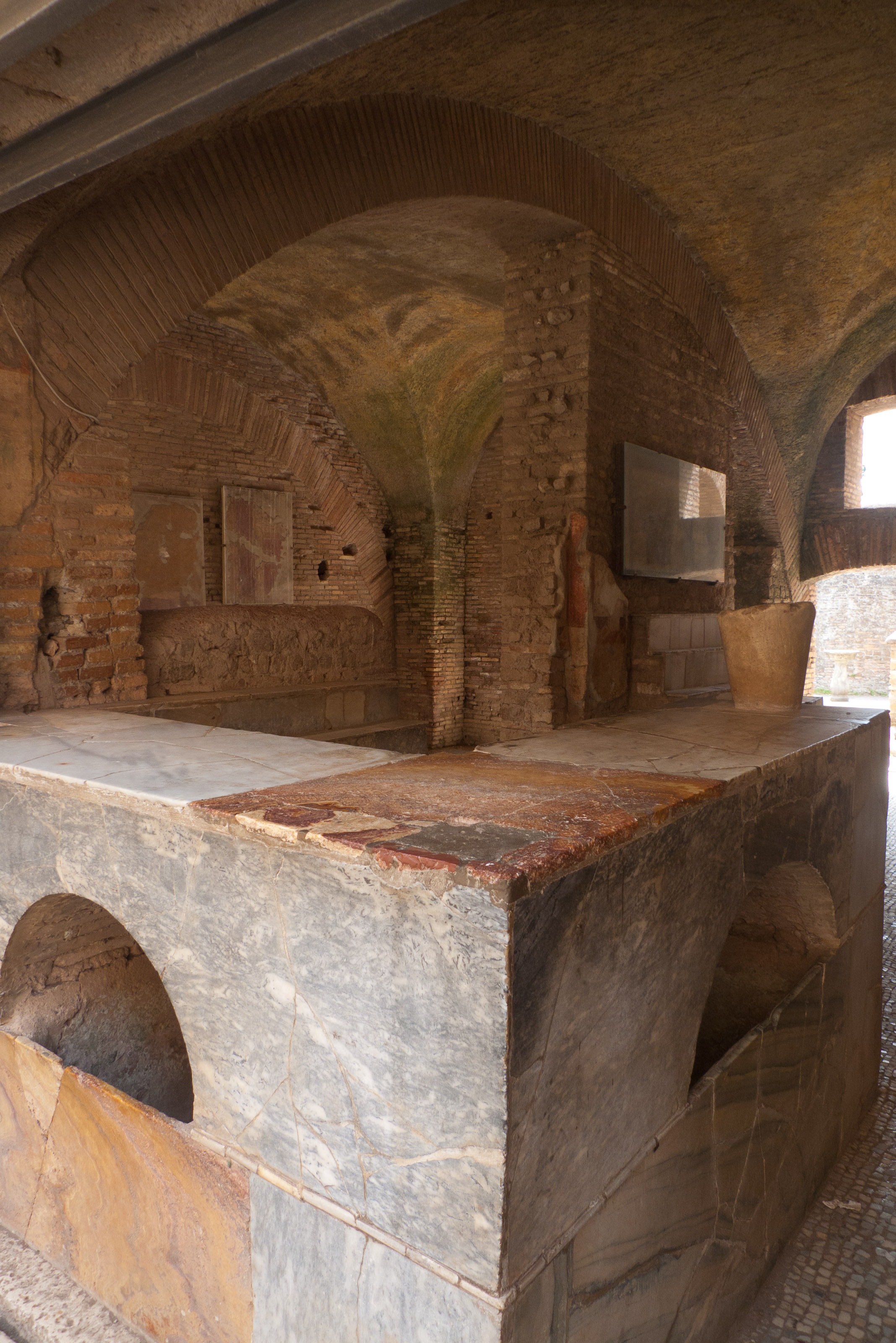