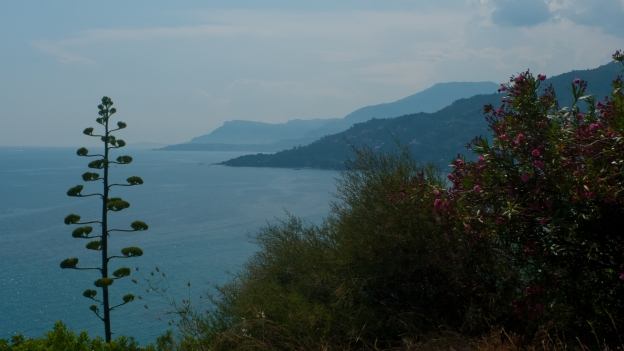 This 342-kilometre cycle tour takes you though the Italian Riviera - the arc of coastline in north-west Italy - famous for its flowers and mild climate. Along the way there are glamorous seaside resorts as well as the World Heritage sites of Genova and the Cinque Terre - with its villages clinging to the coast line and the terraced hillsides carved out over generations.

The coast is also an obvious candidate for cyclists looking for a route south into Italy from Nice and beyond. The main coast road is the Via Aurelia - the old Roman road that runs for almost 700 kilometres to Rome. Today, most the traffic, including lorries, takes the motorway that runs through tunnels and viaducts a little way inland. You can also stay off the main road for about 50 per cent of the way between the border and Genova making use of quiet roads along the seafront and the excellent cycleways built on stretches of ex-railway line, in particular, there’s the Cycling Riviera which is among the very best cycleways in the whole of Europe.

There are still some stretches on the main road, and in high summer, the roads on the coast can get busy, especially at weekends: so this is defin­itely a route for more exper­i­enced cyclists. If you are less confident in traffic then the Spring or Autumn may be the best times to do this route.

The altern­atives to the coast road all involve a long detour as well as a mountain crossing, so if you are coming from Nice you may decide that the advantages of a direct route make it worth putting up with stretches of busy traffic. This guide is intended to help you find the quieter and saner altern­atives where these exist. 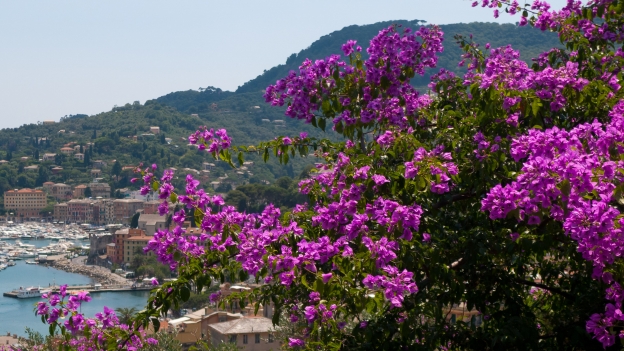 Until the unific­ation of Italy, Liguria was a country in its own right: the Repubblica di Genova, which for hundreds of years was a power in the western Mediterranean competing with the Venetian republic. The region still has its own distinctive identity and flavour. The most obvious and distinctive features are the magenta bougain­villea that cascade over almost every wall. And then there are the coastal villages with their tall narrow buildings packed tightly together with the tangle of tiny narrow streets, and baroque churches.

Look out also for the facades of buildings decorated to give the illusion of expensive stucco or stone decor­a­tions. This is something pretty much unique to Liguria and the area that formed part of the old republic of Genova. When it’s done well you can for a moment be fooled into thinking that a plain-fronted building is in fact a baroque extravaganza.

When it comes to food, Liguria’s most distinctive food is undoubtedly focaccia. You can find focaccia in other parts of Italy, but this is the heartland.

The region is perhaps now best known for the Italian Riviera: the Riviera del Ponente also known as the Riviera dei Fiori (flowers) before Genova and the Riviera del Levante on the other side of the city. At its best, the riviera is home to some of Italy’s chicest and most stylish beach resorts - but at its worst, it can be overde­veloped, overcrowded, over-priced and over-hyped. It’s probably best enjoyed out of season before the crowds arrive in force, and if you do plan to travel along the coast take the oppor­tunity to explore some of the beautiful and historic towns that lie a little way inland from the coastal resorts. 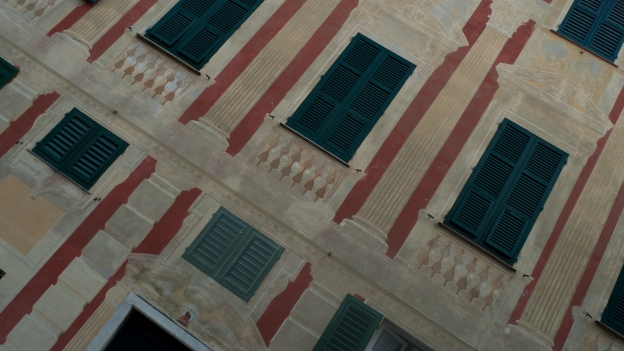 The first part of the tour takes you to Genova. Along the way are two sections of cycleway following the old rail line. It takes in the resorts of Bordighera and Alassio as the towns of Sanremo, Imperia and Savona. the coastline here is relat­ively flat, although there’s a very scenic section following the cliffs near Noli.

The tour passes through Genova, Italy’s major port. The first sight of the port as you come over a rise is defin­itely impressive, and it seems to go on forever (although in fact only for a few kilometres). Add into that traffic going to the airport, which also happens to be on a strip of coast alongside the port, and you have a recipe for some pretty busy and congested roads. As you get into the city centre most of the traffic takes to the elevated expressway. The expressway is off-limits to bikes, but even if it wasn’t, the coast road is the much quieter and more scenic option.

Don’t make the mistake though of dismissing Genova, the city has a beautiful historic centre (centro storico) including the World Heritage-listed Strade Nuove and the system of the Palazzi dei Rolli all a short distance from the main road. The harbour area has also been redeveloped with the bars and cafes, the Museo del Mar and a huge new aquarium.

Update: I spent a couple of days in Genova recently, and worked out a couple of improve­ments to the route: one that takes you through the Via Garibaldi, with the main UNESCO palazzi, and another that takes you out through the district of Nervi - on Sunday mornings this is a favourite among local cyclists heading out of town. Unfortunately, because of the one-way systems, these options only work if you are heading north to south. I’ve added these options to the map and gps downloads.

From Genova the takes you to Rapallo with a detour to the glamorous seaside village of Portofino. is fairly flat, From there it gets progress­ively hillier. When you get to Sestri Levante you have the choice of taking the road inland to La Spezia or heading there via the Cinque Terre - five coastal villages that were once only accessible by sea. After La Spezia there’s a short stretch along the coast of the Golfo dei Poeti - which gets its name from the fact that the poets Byron and shelley made their homes here. Resist the temptation to cut the corner - this is one of the best parts of the whole coast.

If you are heading south you can pick up the Tuscan Coast cycle tour - a 317-kilometre bike tour that leads from the border at Ameglia and takes you to within a day or two’s ride of Rome (that section is coming soon - honest). Alternatively, you could head inland and skirt around the northern side of the mountains taking the road to Lucca through the Lunigiana and Garfagnana.

The tour also joins with the Moncenisio variant of the Ciclovia Francigena (until recently called the Ciclovia dei Pellegrini). The route takes the coast road to Viareggio and from there it heads for Pisa and through Toscana to Siena and on from there towards Rome. 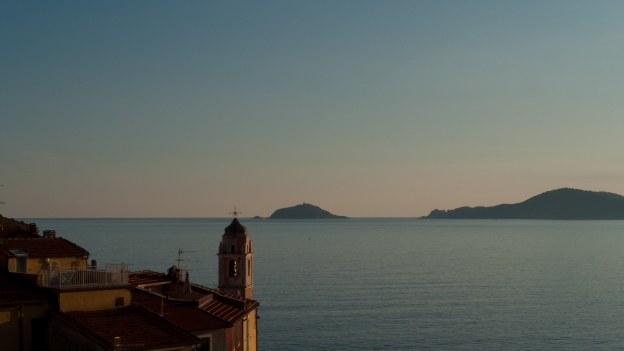 There are lots of hotels along the coast. While places like Rapallo, Portofino and of course the Cinque Terre, have the glamour factor, there are lots of a number of small villages along the way which in many ways offer attractive alternatives.

There are hostels in Genova and the Cinque Terre.

There are lots of campsites but mainly these are at the two ends of the arc - in the centre between La Spezia and Savona there isn’t a huge amount of choice, and the sites I saw weren’t partic­u­larly appealing.

Ventimiglia station is served by trains from Nice.

The route passes close to Genova airport, however, there aren’t a huge number of airlines offering direct flights (see the destin­a­tions and flight inform­ation). The best choices of flights are from Nice. Pisa airport is a day’s ride further on along the coast from the end of the tour. Note also that Genova airport is pretty tricky to get into and out of.

lamialiguria.it has an innov­ative approach to using video to promote the region, sponsoring compet­i­tions for short videos. This was the winner of a recent competition: 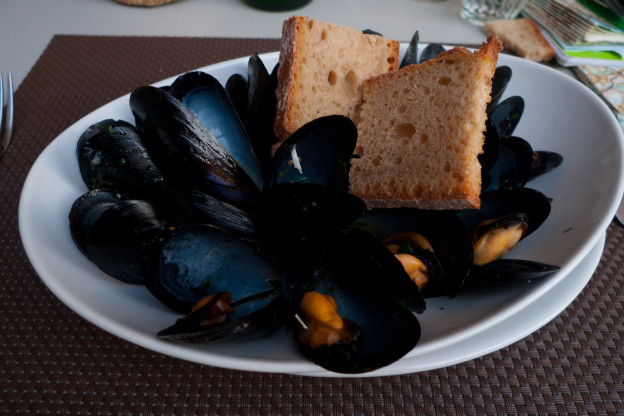