This section of the route takes you from Trani the ‘city of maritime law’ (or, more prosa­ically, stone - depending on which road you com in on) to Margherita di Savoia - the ‘city of salt’ - and from there to Manfredonia and Mattinata on the Gargano peninsula.

The landscape changes dramat­ically at Manfredonia and come into the Gargano peninsula: this part of the Puglia coastline is without doubt the most dramatic and beautiful in the region - and one of the most beautiful in the whole of Italy.

Barletta is a charming city: it’s major landmark is the castle. Originally built by the Normans, it was rebuilt by the Aragonese with its stark angular construction it must have been a forbidding sight. Now it’s a park where people come for the Sunday morning passeg­giata.

I took the direct option along the coast road. however, there is the option of going inland round the saltpans - there’s a stretch of several kilometres of traffic-free cycleway.

Mattinata is probably the best base for a ride to the Santuario di San Michele Arcangelo - a shrine built into a big cave where St Michael is said to have appeared in 490. This was, and is, an important place of pilgrimage in its own right as well as an important stop on the route to Jerusalem. It’s part of the Lombards in Italy UNESCO World Heritage group of sites. 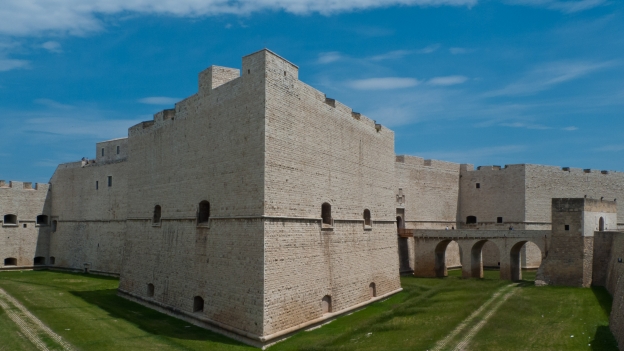 Margherita di Savoia is home to Europe’s largest salt pans - and they are huge; extending for 20kms along the coastline and for up to 5 kms inland. you can see the machinery at work. despite the heavy machinery the area is also a nature reserve because of its importance as a wetland habitat for birds. the process, in case you are wondering, is that sea water is taken into the first of the lagoons and then as the water evaporates the increas­ingly concen­trated salt solution is decanted into the adjoining basin until there is no more water and the diggers move in to scoop up the salt. The salt-pan of Margherita di Savoia - la Salina di Margherita di Savoia

The next main town along the coast is Manfredonia: today the major fishing port of Italy’s Adriatic coast. The city was besieged and sacked by the Ottoman Turks in 1620 and many of its people killed or taken as slaves. The city took over a century to recover. 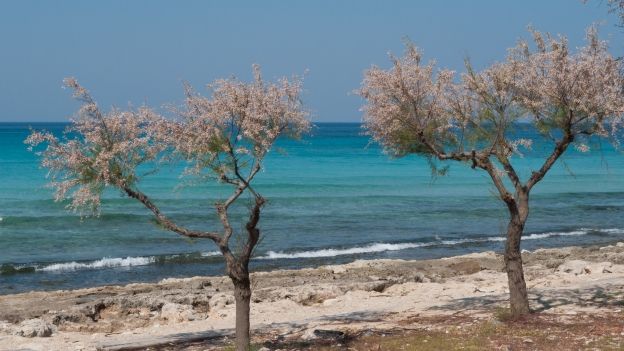