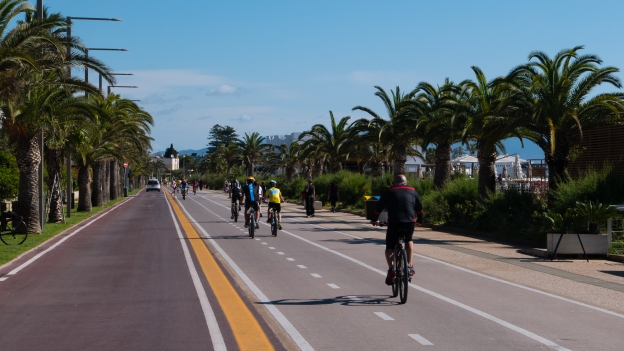 Cagliari: cycleway by the Poetto beach

Easy-ish. There are some short climbs around Villasimius.

The route is mainly on quiet roads - there is one ten-kilometre section where the road is busier but even here it’s not very heavy.

Entirely on surfaced cycleways and roads.

The route heads out of Cagliari following the 7-kilometre cycleway along the Poetto beach. This is followed by a gorgeous stretch of coastline as you head towards Villasimius and the Capo Carbonara.

For more about Cagliari please go to Places: Cagliari on this site.

The most accessible beaches are on the southern part of this section:

Cagliari to Villasimius and the Capo Carbonara

Coming out of Cagliari there’s a lovely ciclabile (cycleway) that takes you for about ten kilometres along the Poetto beach.

Preceding it, there’s another cycleway that starts almost immedi­ately after the ferry terminal and runs alongside the harbour.

When the first stretch of cycleway ends, continue along the seashore, to a marina and then turn left and pick it up where it resumes. The route then follows a quiet service road which runs between the main road and a canal. When the cycleway reached a junction I picked up the road (the Viale Poetto which leads direct to the Poetto beach.

The lungomare beside the beach has been taken mainly given over to cyclists and pedes­trians with one lane left as a restricted access for residents and taxis.

Finally, sadly, the cycleway comes to an end after 7 kilometres and you need to pick up the SP17. There’s a cycle lane along the road, that’s more or less continuous, although there are points when it gets irrit­ating, at every junction it tries to prevent you going straight on, and you start to wonder whether it’s worth the trouble.

After the cycleway from Cagliari the next 13 or so kilometres are a bit dull in comparison, but be patient and your patience will be rewarded with another fine stretch of coast road as the SP 17 takes you to the Capo Carbonara, passing on its way, the Torre Cala Regina and the Torre Fenugu.

After the village of Solanas the road climbs up to 159m passing the Torre di Capo Boi (and the Capo Boi) on the way. Over the crest of the hill and the Golfo di Carbonara comes into view. You can see, right at the end of the capo two light­houses: one the Faro di Capo Carbonara and the other the Faro della Isola dei Cavoli. 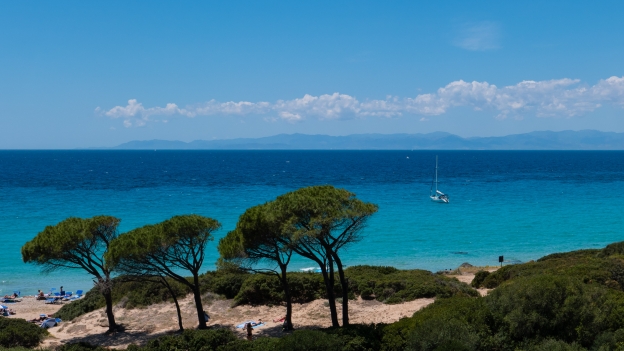 There is a stretch of decent cycleway that takes you to the fringes of the resort town of Villasimius, and another takes you out of town along the Via Matteotti almost to the beach. Just before the beach turn left onto the SP18 following the signs for Muravera.

The SP18 continues along the coast from Villasimius —a great scenic road. It climbs to 165m as you reach the top of the climb there’s a dramatic first view of the long line of beaches along the Costa Rei and in the distance the mountains of the Gennargentu. There are also great views back towards the Capo Carbonara and over the Isola Serpentara.

The road then descends down to Cala Sinzias where there’s a nice beach.

After Cala Sinzias it becomes less inter­esting. After a while I turned off onto a quiet minor road which rejoins the strada provin­ciale near the coastal resort of Costa Rei. From here it’s time to head north to pick up the the old SS125 or to give it its full name the Strada Statale Sardegna Orientale

There are two versions of the SS125. There’s the new road, referred to as the Nuova SS125 or the SS125 variant which has lots of tunnels and viaducts, and a section near Cagliari that’s off-limits to bikes. One way or another it’s a road to avoid. There’s also the old road which tends to be much quieter because most of the traffic takes the new road. It isn’t entirely deserted as it’s marked on maps as the scenic option - so it’s popular with tourists, camper­vanners and motorcyclists.

The road signs are intended to direct through traffic onto the fast road, so if for example you simply follow the signs for Olbia then you are likely to end up on the new version the road which, trust me, you don’t want to do. If you have a gps then all you need to do is download the tracks follow them, but if you are doing it the old-school way then it needs a bit of care —although it’s no more than a bit of common sense really. It’s defin­itely worth having a decent map that’s detailed enough to show the names of the places on the road.

Near Olia Speciosa there is an inter­section with the SS125 Nuova. This is the first of a series of points where you need to ignore the signs designed to encourage car drivers onto the new road. In this case ignore the sign for Muravera and take the SP20 following the signs for San Priamo.

The SP 20 isn’t especially scenic, but is very pleasant and it’s a lovely cruise to junction with the old SS125 just outside San Priamo.
Keep an eye out, for the dazzling white of the saline at Torre Salinas, a little further on from the junction on your right-hand side. The beach here is well worth the short detour. 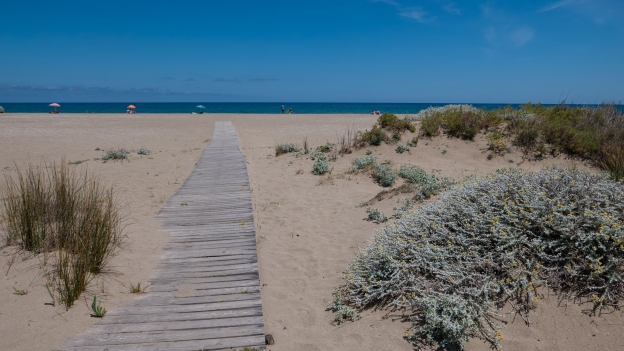 The road takes you into Muravera a small country town with places to stay, cash machines, bars and restaurant. Going out of Muravera ignore the signs for the new SS125 and keep straight on. Soon after Muravera comes Villaputzu another cheerful, unpre­ten­tious, country town.

There’s a fair amount of local traffic between Muravera and Villaputzu, but once you’re past Villaputzu things quieten down a lot.

At the inter­section after Villaputzu, continue straight on ignoring signs for Cagliari and Olbia. Basically do the same thing at every other intersection.

On the way, keep an eye out for the pretty 15th-century church of San Nicolà set among olive trees. (There’s also a shady picnic area). The church, built between the 12th and 13th centuries, is one of only two brick-built Romanic churches on the island. 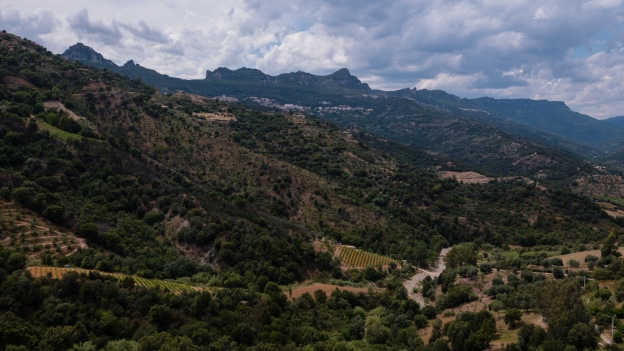 A few hundred metres after the 100-kilometre marker sign the two roads diverge again, with old road heading left into Tertenia. You could continue on the road to the next inter-section, but note that after that there’s a long tunnel. Among the many reasons to go via Tertenia are a decent bar-ristorante a super­market, a water tap, and a cash machine —not to mention a street named after Ernesto Che Guevara. Going through the town follow the signs for the municipio.

A little further on from Tertenia you come to another inter­section. At first sight, it looks like you have to rejoin the main SS125, but in fact, the road continues beside it. Follow the signs for Cardedu and Jerzu and ignore all of the others.

As the new road disap­pears into a tunnel the old road continues to climb gradually towards the high point of 267m at the Genna e Cresia, heading through the Cannonau wine country. At the top of the climb, at the junction with the SP11, bear right following the signs for Lanusei.

As you descend, a whole new perspective opens up, on your right you will see the Gennargentu and a string of villages high on the heights on the other side of the valley. If the previous section on the SS125 was lacking a little bit in drama, the descent certainly makes up for it. Eventually, you come to a junction and a concrete bridge that takes you over the Fiume Pelau river. Turn right, following signs for Cardedu.

At Bari Sardo the route detours to take in the long sandy beach with its watchtower. The detour is worth the effort, but you can just continue straight on if you prefer. 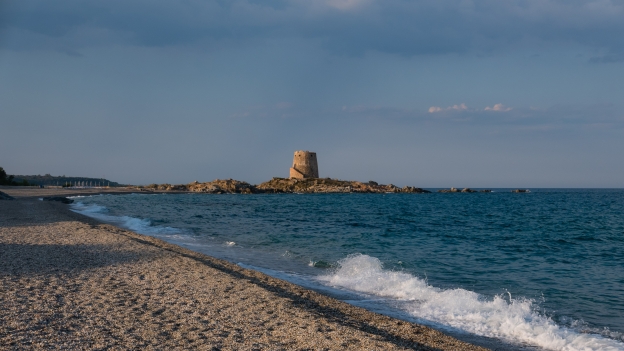 The beach at Bari Sardo with the Torre di Bari Sardo

I had originally planned to turn off the SS125 at the 133-kilometre mark and then make a detour round the coast. In fact, this time the section of road shown as planned had in fact been built. So I continued on following the old SS125 into Tortoli. If you are heading for Tortoli or to the ferry port at Arbatax you need to pick up the SS125 dir (diramazione) - a branch road of the main road. 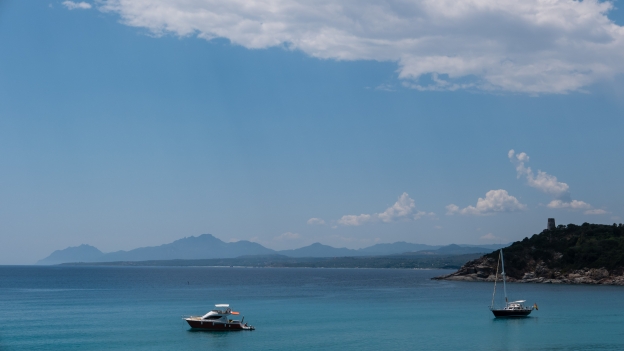 The main towns on the route (Villasimius, Muravera, Bari Sardo, Tortolì, Santa Maria Navarrese) have a range of accom­mod­ation options.

If you’re planning to stay in Cagliari my recom­mend­ation would be the Locanda dei Buoni e Cattivi. A really nice 5-room B&B that’s run by a charitable found­ation set up to help young people who deserve a second chance (“ragazzi che meritano una seconda possib­ilità”). The restaurant itself is very good too. Also bookable via booking.com (booking.com: Locanda dei Buoni e Cattivi)

There’s hostel in San Priamo pretty much on the route itself: the Ostello San Priamo.

There’s a hostel in Cagliari (the Hostel Marina which is housed in a 16th-century former monastery).

This section of coast is a popular choice for tourists from northern Europe so there are lots of campsites and they tend to be open for a longer season than campsites in other parts of Sardegna.

I stayed at these campsites:

There’s a train station at Tortoli.

The ferry terminal at Arbatax has services to Civitavecchia on the mainland as well as, in summer, services to Genova, and Cagliari.

There aren’t many services outside the main towns along the route.

Between Villaputzu and Bari Sardo there are bars and restaurants (and a water tap) in Tertenia, and a bar in Cardedu.