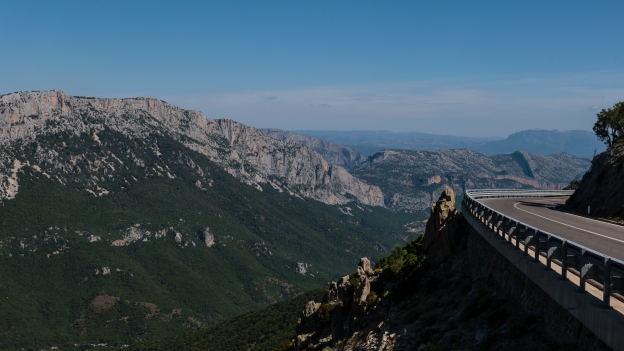 The SS125 heading for Dorgali

Moderate. The climb to the Genna Silana is a little over 1000 metres of altitude gain. However the gradient is pretty gentle.

The road between Baunei and Dorgali is relat­ively quiet as most local traffic takes the inland roads. However, the road is popular with motor­cyc­lists who seemed to outnumber all of the other road users put together.

This section takes you into the Gennargentu mountains. It’s a pretty gentle climb and the scenery defin­itely makes the effort worthwhile.

The Golfo di Orosei is one of the most spectacular sections of the Sardinian coast, with some of the island’s most famous, and photo­graphed, beaches such as the Cala Luna and the Cala Goloritzè . These are accessible only by boat, or on foot, from Cala Gonone.

Into the Gennargentu mountains

There’s a fair amount of traffic on the road coming out of Tortoli, so it’s a relief, as you come into Gelisuli (Girasole) to see a lovely long stretch of cycleway running beside the road. At the round­about, as you go through Gelisuli, there’s a statue inspired by Nuraghic-era bronze statuettes.

Further on from Gelisuli, the two roads converge at Lotzorai, and it’s time to rejoin the main SS125 and start the climb into the mountains. After the junction of the two roads, the first town along the way (in fact the only town) is Baunei (480m). You should be able to see it up above you for most of the time. 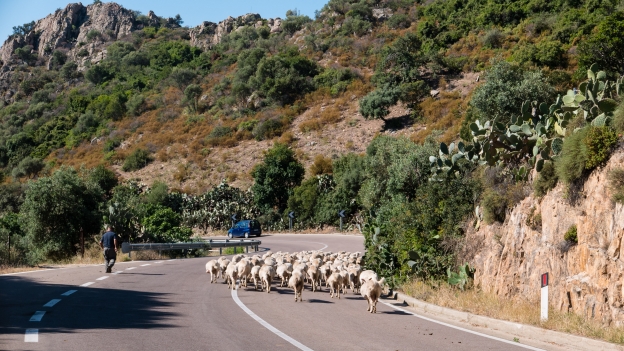 At Baunei there are places to eat/drink and places to stay, a super­market, and a bancomat (cash machine/ATM). There’s even a water tap (on the right-hand side as you come out of the village just before you get to the 156-kilometre marker sign).

To your right the cliffs tower high above you, and to the left the ground seems to fall for way almost vertically, with panoramic views out back towards the sea as well as the mountains of south-east Sardegna. 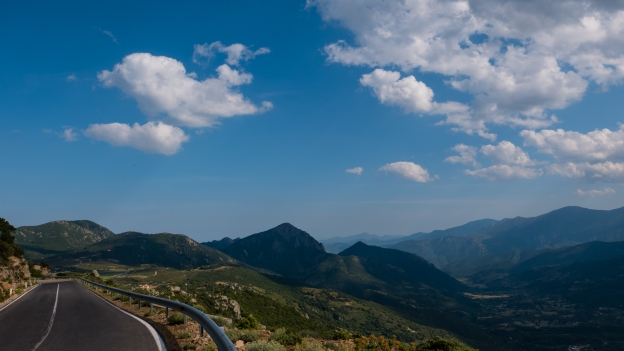 The SS125 near Baunei heading for the Genna Silana

The road comes to a scenic viewpoint, the Genna Arramene (590m), where you can get a final view over the sea. From here the road heads inland and climbs towards the ridge that takes it towards the Genna Coggina (724m).

After the Genna Coggina the road continues, very slightly descending, with a lovely section through woodland. There’s a beautiful shady picnic area (Monte Lepone) on the left-hand side. You could even have a barbecue here. There is a water tap, but there is a notice to say that the water quality hasn’t been tested.

After the picnic area the road starts to briefly descend down to about 660 m altitude. The views that open up a spectacular. In the distance you can see a stretch of landslide shelters (or open-sided tunnels depending on your point of view). Together they go on for the best part of 2 km. Visibility in the ‘tunnels’ is excellent, but it’s probably a good idea to take a rear light just in case.

Once you leave the tunnels there is a wonderful section with superb views back down the valley. From here the road passes onto a high altopiano surrounded by mountain peaks. The road defin­itely gets a lot more peaceful as the day goes on and into the late afternoon.

The most dramatic section of the road is still to come: after the 900m altitude point (a little bit after the 177-kilometre sign) the road turns as follows a rocky ridge with the crest of the ridge looming high above the road.

There’s one last section of rock-fall protection shelters before you reach the pass. 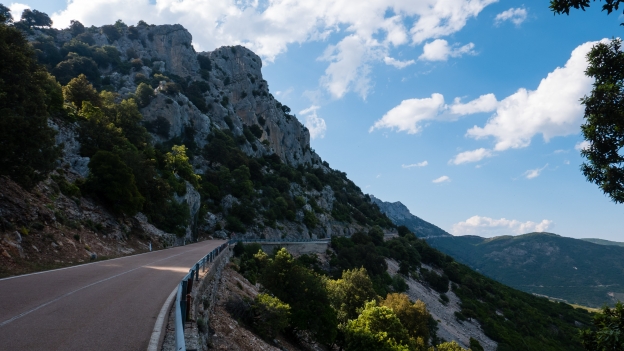 The SS125 near the Genna Silana

If you have the time (and a decent pair of hiking shoes) you can visit the Gola di Gorropu —the walls of the canyon are 500 metres high making this one of the deepest canyons in Europe. The path is 4 kilometres long and descends for 650 metres altitude. It takes 1½-2 hours going down and 2½ climbing back up.

The Chìntula Company offers a jeep shuttle service - cost is 20€ (admission to the canyon included) or an all-day guided visit for 45€. More inform­ation from gorropu.info. 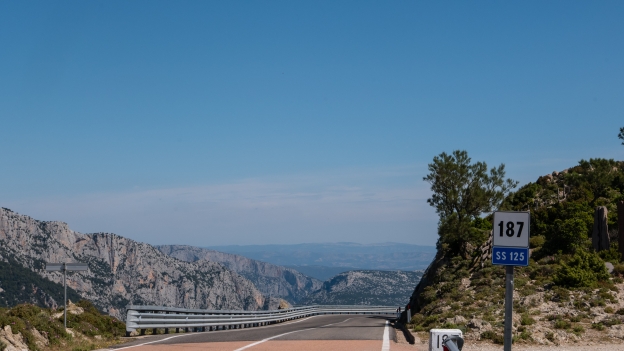 The SS125 heading for Dorgali

The section from the Genna Silana is the most spectacular. At the Gorropu Base Camp, there’s a panoramic viewpoint which you can climb up to with views over the mouth of the canyon.

Just before you get to Dorgali there’s the turning for the coastal resort of Cala Gonone. Cala Gonone is the jumping-off point for going to the beaches on the Golfo di Orosei that can only be reached by boat. You’ll see two tunnels. One of these may be for exclus­ively for bikes, but unfor­tu­nately, I haven’t been able to confirm this (and I didn’t notice as I passed by). The tunnels are just over 400 metres long.

After the tunnels there’s a seven-kilometre descent (altitude difference 460 metres). There’s also an old mule track down from Dorgali via the Vecchia Galleria but so far as I know this is only an option for confident mountainbikers.

Tiscali is a perhaps the most evocative of the island’s nuraghic sites. It is sited in a huge hole in the ground, although perhaps ‘huge open-top cave’ might be a better description than ‘hole’ (the site was formed by the collapse of the roof of a huge cave). Check the pictures on enjoydorgali.it.

The Cooperativa Ghivine, based in Dorgali, offer guided visits with a transfer to the starting point of the path that leads to Tiscali. 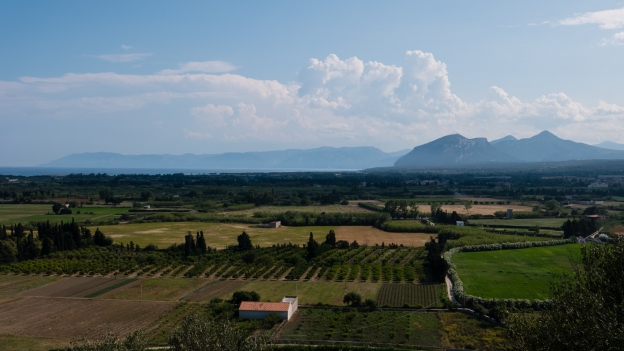 When you come to the junction outside Dorgali continue straight on following the signs for Orosei (don’t follow signs for Nuoro).

After Dorgali the road gets much, much, quieter. It also flattens out for a while, before starting to descend towards Orosei and the sea. In between, it passes right through the middle of the quarrying complex of La Quadrifoglio where they quarry marble. There are massive quarries on either side of the road. If you take a peek you can see the huge quarry trucks look almost like small toys at the bottom.

An altern­ative option would be to turn off the route and head for Lanusei and then skirt round the Gennargentu via a series of mountain villages heading for Fonni and then heading for Dorgali via Mamoiada, Orgosolo, and Oliena.

There’s a nice hotel (the Hotel Gorropu) with a restaurant (and some great views) at the Genna Silana (the hotel is a good place to stay if you want to hike the Gola di Gorropu). There are also a number of agrit­urismi along the route.

There are a number of hotels in Cala Gonone and it’s a nice place to stay a day or two —but bear in mind that there’s a 460-metre (altitude gain) climb to come back up to rejoin the route.

There is a hostel at Lanusei: the Nuova Luna which is a short detour off the route.

There’s a small, basic campsite (the Camping Silana) at the Genna Silana. I didn’t know about it until until I passed by.

There are also a couple of agrit­urismi on the route near Dorgali that have camping facil­ities (the Agriturismo S’Ozzastru and the Agriturismo Paulesa.

There are two campsites at Cala Gonone: the Camping Cala Gonone and the Agriturismo Nuraghe Mannu which has five camping pitches. There’s also the which as the name suggests is for camping cars and caravans although it looks like you could pitch a tent there. In the main holiday season it would defin­itely be worth checking avail­ab­ility before you make the descent.

There’s a train station at Tortoli.

The ferry terminal at Arbatax has services to Civitavecchia on the mainland as well as, in summer, services to Genova, and Cagliari.

There aren’t many services outside the main towns along the route. 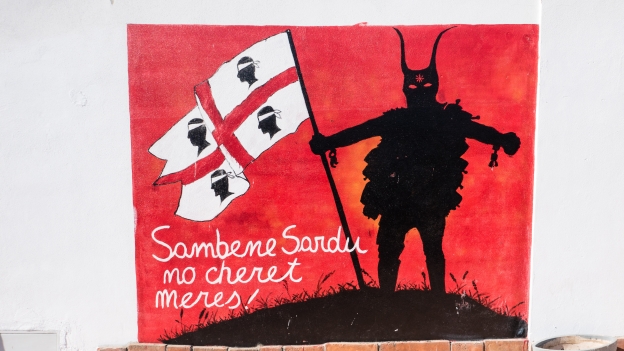