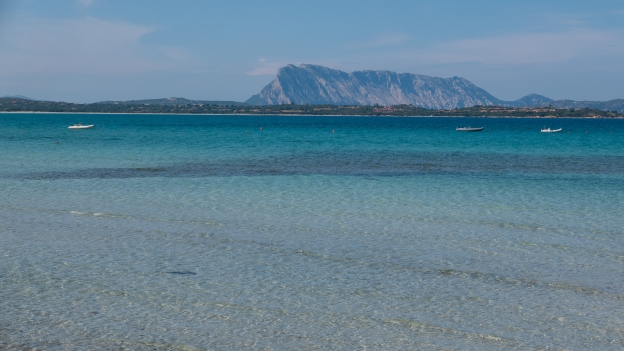 Beach at San Teodoro with the Isola Tavolara in the distance

The route is mainly on quiet roads, but the road into Olbia is relat­ively busy.

After Orosei the route heads for Posada one of Sardegna’s most attractive and historic towns with the Castello della Fava on the heights above. It continues following the coast via Budoni, and the attractive seaside resort of San Teodoro and then into Olbia.

From Orosei onwards you are really spoilt for choice with miles of sandy beaches including:

Coming out of Orosei, take the bridge over the river Cedrino, following the signs for Siniscola. There is then a very short climb before the road turns and starts to follow the coast. Take a moment to enjoy the views over the lush coastal plain.

After Orosei the next stop is the small resort-village of Cala Liberotto about 10 km further on. The road then heads inland skirting round a coastal pineta before then heading through open countryside and returning to the coast at Capo Comino. Or almost to the coast, because this then another long stretch of coastal pineta.

I turned off the road to make a brief detour to the village of Santa Lucia, a pleasant little seaside village with a nice lungomare and a Spanish-era tower and church.

After Santa Lucia the SS125 comes to a junction with the SP3 which leads to another pleasant coastal resort at La Caletta and to Posada perhaps the most attractive historic village on the eastern coast.

La Caletta (‘the cove’) is connected to Santa Lucia by a 10-kilometre long white sandy beach. The road between them passes through a long stretch of sand dunes. The route takes you past the Torre Aragonese as well as what looks like a Spanish-era church and some fisher­men’s cottages on the shore before turning inland passing a stretch of wetland and rejoining the main road this time the SP24. Turn right following the signs for Posada.

Posada is one of five villages in Sardegna to be considered one of the presti­gious Borghi Più Belli d’Italia (the others are Atzara, Bosa, Carloforte and Castelsardo). 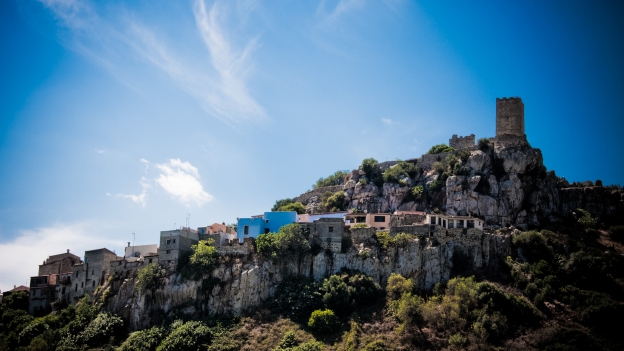 Posada with the Castello della Fava on the hilltop. Photo by Roberto Ventre

Coming to Posada there’s a cycleway that takes you into the village taking you past the little 17th-century church of Santa Lucia.

Above the village is the Castello della Fava built in the 13th century it once controlled the border between the giudicati of Gallura and Arborea. In summer it’s open from 9:00 until an hour before dusk. Check opening hours and prices: culturaitalia.it: Castello della Fava

From Posada you can head for the beach just two kilometres away at Su Tiriarzu.

As you rejoin the SS125 in the modern part of Posada, look out for the gorgeous mural about the Parco Fluviale to your left . The road crosses over the Posada river and then runs alongside SS131 — which you defin­itely want to avoid. The fact that there’s a fast road nearby means that the SS125 is pretty quiet.

The next town after Posada is Budoni where are loads of shops and restaurants. Coming out of Budoni turn off the SS125 following the signs for San Teodoro. There’s a cycleway on the right-hand side of the road. The cycleway runs out as you rejoin the SP1 just outside Agrustos.

The SP1 has a short sharp climb along the way, but this is compensated for by the lovely views as you descend down into the pretty seaside resort of San Teodoro. On the way you’ll get glimpses of the Isola Tavolara looms out of the sea. And ‘looms’ is no exagger­ation as the highest point on the island is at 558 metres altitude. 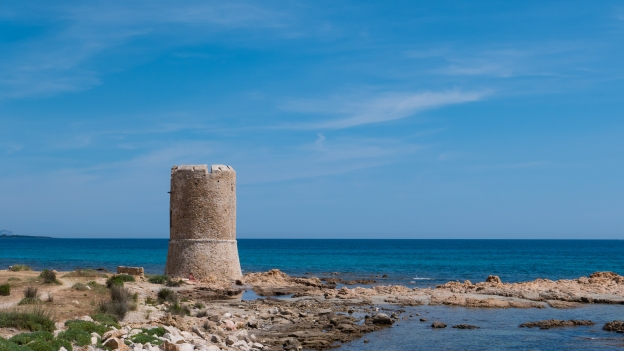 Coming out of San Teodoro take the Viale Olbia, and at the round­about pick up the Via Gramsci. At the junction with the strada statale, turn right following the signs for Olbia. The junction further on, be sure not to take the road indicated by the signs for “Olbia (4 carreg­giate)” —4 carreg­giate is means four-lane highway (the SS131).

If you are heading for the port, there’s a nice stretch of cycleway which takes you to doors of the Stazione Marittima. The bad news is that before that you have to negotiate a stretch on basalt blocks along the lungomare.

As you come into Olbia you reach a round­about where you turn left for the airport. A little further on there’s a junction where you have the choice of bearing right to go to the centre of Olbia or continuing straight on. The turn off for the centre is probably the better option, but if like me you carry straight on , it’s not the end of the world. However, bear in mind that there’s a 400-metre tunnel further on as the road heads out of Olbia.

Olbia is a nice place to stop for a night or for a short break, or simply to while away a little time before your flight or ferry leaves. There’s a pleasant centro storico in the streets around the Corso Umberto. If you have some time the town’s Museo Archeologico is worth visit. The star sight is the remains of a roman ship that was sunk in the harbour when the town was attacked by the Vandals around the year 450. Admission is free. Check opening times: olbiaturismo.it. 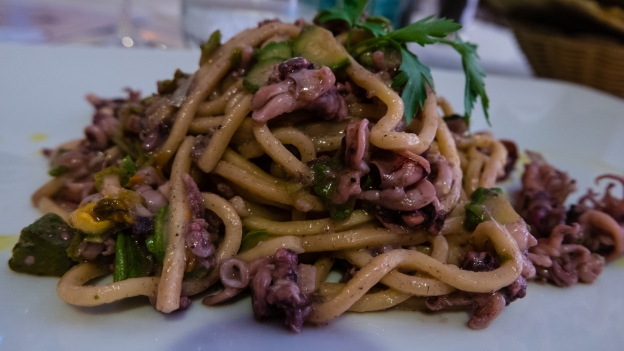 The main towns along the route (Orosei, Budoni, Siniscola, San Teodoro and Olbia) offer plenty of choice in places to stay.

I stayed at the Camping Porto Sosolinos at Cala Liberotto near Orosei and Camping Tavolara near Porto Taverna. I’d happily go back to them, but there were a number of other options along the way.

Olbia is the main ferry terminal for the island with routes to Genova, Livorno and Civitavecchia. The terminal at Golfo degli Aranci is also nearby.

There’s a train station at Olbia with services to Cagliari.