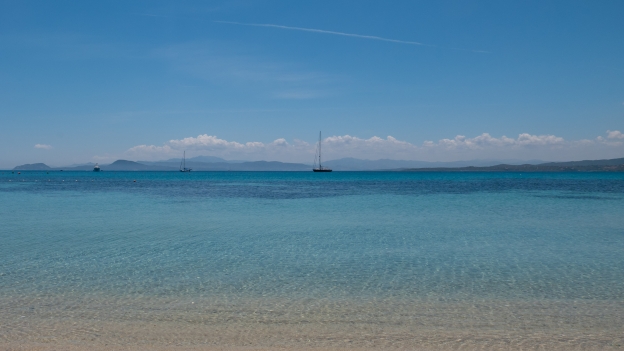 Easy-ish. There are some short climbs, but nothing either long or especially steep.

Mainly on quiet roads. There’re some busier sections going into and out of Olbia.

Entirely on surfaced roads or cycleways

This section takes you from Olbia to the attractive port town of Golfo Aranci. From here it heads to Palau and the La Maddalena national park. The coastline is dotted with small islands and rock forma­tions of pink granite.

The rocky coastline means that the beaches tend to be smaller than in other parts of the island, but there are still lots to choose from: 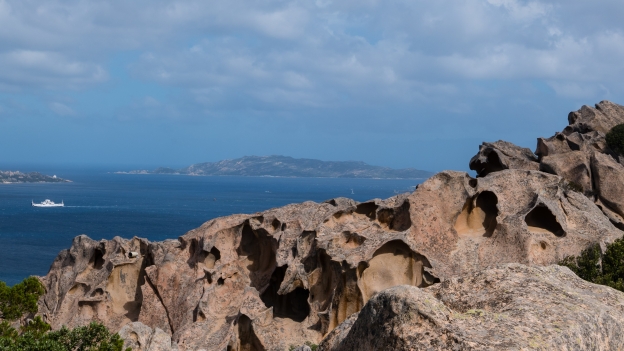 Coming out of the centre of Olbia towards the Golfo Aranci there’s a tricky round­about where, if you take a wrong turning, you can end up in a 400 metre-long tunnel. Follow the signs for Golfo Aranci. The road out is rather busy as it passes through the commercial/industrial hinterland of Olbia towards the porto indus­triale but once you are past the turning for the porto, it gets much quieter and easier.

You are soon at Pittulongu where there’s a lovely stretch of beach with a view back over the Isola de Tavolara. Well worth taking a moment if only just to recover from the ride out of Olbia. There’s a decent pavement cycleway, but as as is often the way, you don’t really need it.

The SP82 continues all the way to the resort town of Golfo Aranci which is also the main base for the Corsica-Sardinia Ferries. If you go right down to the port, you will find a street where there are still the old single-story fisher­man’s cottages. You can see plenty of evidence of the construction boom in Sardegna over the last couple of decades, but it’s still an attractive and pleasant place. There’s even a nice stretch of beach­front cycleway take you into and out of the town. 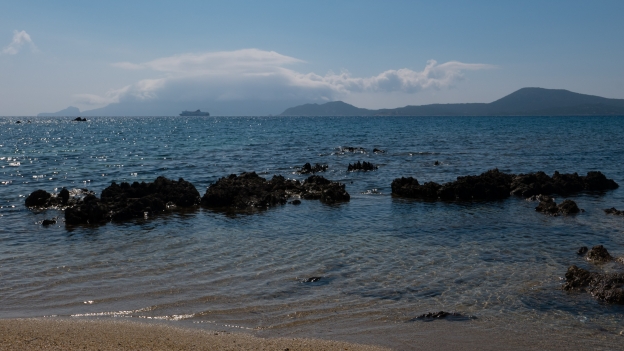 Coast near Olbia: a ferry sets out to sea

From Golf Aranci you climb back up to the round­about from which, you can see the sea in pretty much all direc­tions. On the round­about itself is a monument (La Colonna di Luce by Lorenza d’Andrea) to Guglielmo Marconi who made his first radio broad­casts from nearby Capo Figari. In fact if you look in the distance towards the rocky hilltop overlooking the town you can see a radio mast on the heights.

One option after Golfo Aranci is to head for the Costa Smeralda. I did, but really I wouldn’t recommend it. The road itself is pretty scenic with a viewpoint looking out over the Cala di Volpe and Porto Paglia that’s good enough to get all except the laziest of car drivers out of their cars, but the road is narrow and fairly busy. My advice would be to bypass it and to head instead for San Pantaleo.

I was drawn to San Pantaleo by the description in the Lonely Planet guide:

Although only about 16km from Porto Cervo, the rural village of San Pantaleo provides a welcome dose of authen­ticity after the sterile resorts on the coast.

The village sits high up behind the coast, surrounded by gap-toothed granite peaks, and has become something of an artists’ haven, speckled with little galleries and craft shops. It is also one of the few Sardinian villages set around a piazza, a sturdy little church at one end. In summer you’ll often find a bustling Thursday market here, and in spring the blossoms make it more photo­genic than ever. Year round, it is an attractive place for an aimless amble

All true, but when I arrived in the village on market day (Thursday) in mid-June the place was not so much bustling as heaving with people from the coast in search of the authentic Sardegna, and the chance to do a bit of shopping. Another day or a Thursday outside the main season would have been a different story. 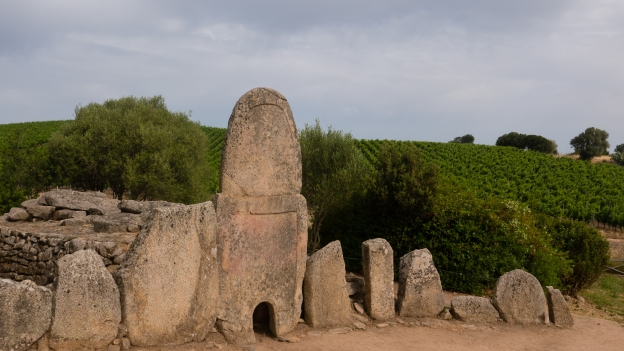 After San Pantaleo I would suggest a detour to the archae­olo­gical sites of the Tomba dei Giganti Coddu Ecchju and the Villaggio Nuragico La Prisgiona. The two sites are remnants of a highly sophist­icated culture that thrived on the island over three thousand years ago. The tomba dei giganti is a burial mound; the name —tomb of giants— comes from the huge stone at the entrance which must have looked like a headstone for a giant. Coddu Ecchju is probably the best-preserved example.

The nuraghi are stone towers built between three and four thousand years ago. There are about 7,000 of them in Sardegna and they are unique to the island. The most famous site is the UNESCO-listed Su Nuraxi in Burrumini. No one knows for certain what their purpose was: it might have been defensive, it might have been ceremonial. Just as the purpose of the nuraghi is shrouded in mystery so is the civil­isation that built them. It seems to have gone into decline about 1000BCE perhaps due to climate change caused by volcanic eruptions. (For more about the nuraghi see en.wikipedia.org: Nuraghe)

La Prisgiona is the largest and most important nuraghe in northern Sardegna —others are much smaller and have the ‘corridor’ type of construction as opposed to the tower. The tower is surrounded by a village there are altogether hundred capanne (buildings) although many are still to be excavated. It is thought that most of them were used as workshops.

The sites are located close together a few kilometres from Arzachena and easily accessible, with a tarmac road taking you practically all the way there. They. The way is well signposted.

After the nuraghic sites the next stop is Cannigione on the coast. You can get there by skirting round Arzachena or going through it. Cannigione is a cheerful and easy-going place for a stop and, as a bonus, there’s a cycleway along the lungomare. The road continues around the Golfo di Arzachena, the views get more inter­esting as you turn the corner of the golfo, especially as you pass the Spiaggia delle Saline. The road gets much quieter as well. 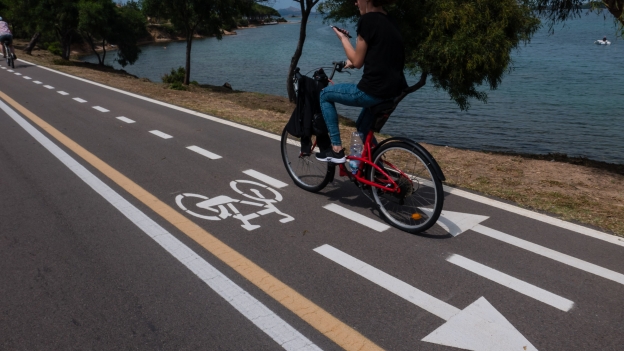 I had a little debate about whether to make the detour to the Capo d’Orso or go straight on to Palau. In the end, I decided to go and I’m really glad that I did. At the end of the road, there’s the Monumento Naturale della Roccia d’Orso. This seems to be a major tourist attraction for the area, although I must have been the only person who hadn’t realised it. It’s well worth the detour and the effort to climb up to the viewpoint itself —this is defin­itely a panoramic viewpoint that deserves the name as you can see wonderful views in all direc­tions. Cost of admission is 3 euros and worth every penny. 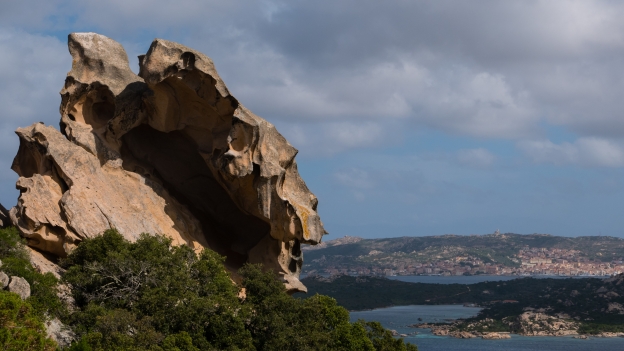 View from the Capo d’Orso towards La Maddalena

Bright and breezy Palau is the major tourist centre for this section of the coast, and jumping-off point for the ferries to La Maddalena and the National Park (Parco Nazionale dell’Arcipelago de la Maddalena). The quayside is full of firms offering cruises along the coast or hiring out gommone (inflatable dinghies). Like Golfo Aranci it looks like town has seen a huge amount of devel­opment over recent decades. 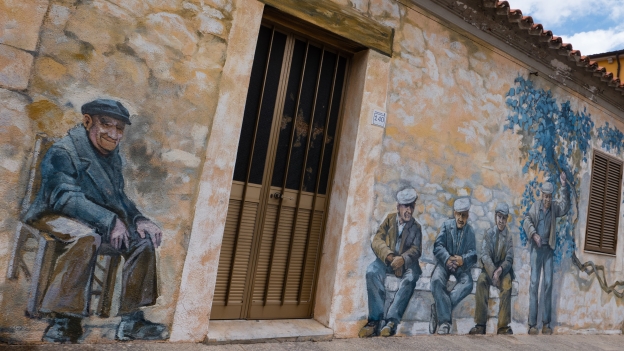 Murale in Palau. (I overheard a passerby saying that the man on the left of the picture used to live here)

There is plenty of choice in the main towns.

Booking.com city pages for places on this section of the route:

There are rail stations at Golfo degli Aranci and after that, at Porto Torres. There are however plenty of ferry connec­tions: Golfo degli Aranci is the main base for Corsica-Sardinia Ferries who operate to both the French and Italian mainland (Routes map).

There are very few services outside of the main towns —although these aren’t too far apart. 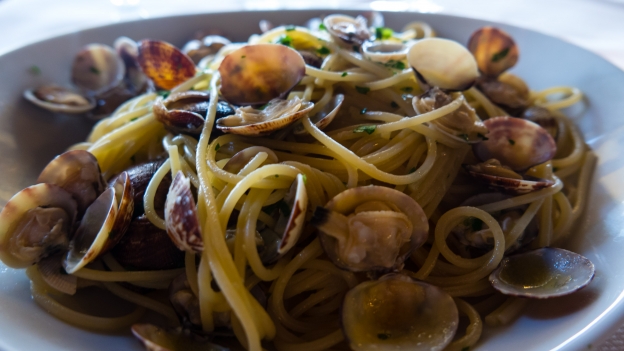 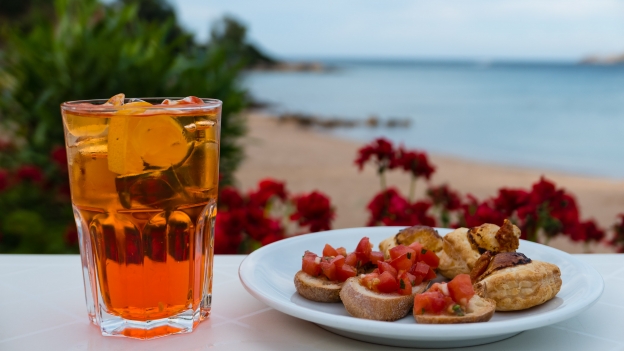