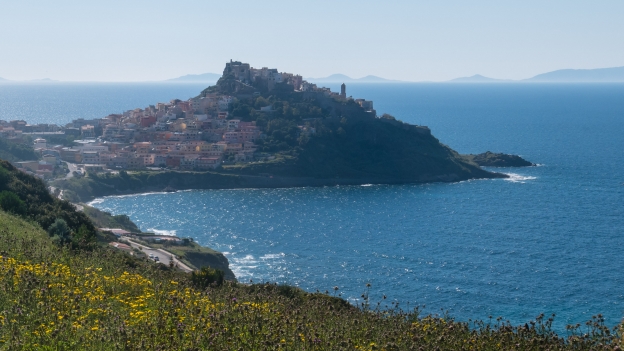 From Palau the route heads for the port town of Santa Teresa Gallura, and from there loops to the dramatic headland of the Capo Testa. After Capo Testa it follows the undeveloped north-west coast to Castelsardo. Built on an island attached to the mainland by a causeway, its centre and fortress have remained largely unchanged since the 17th century

This area has some of northern Sardegna’s best beaches, and is surpris­ingly undeveloped. Beaches convenient to the route include the beaches at Vignola and Lu Litarroni between Santa Teresa Gallura and Castelsardo. 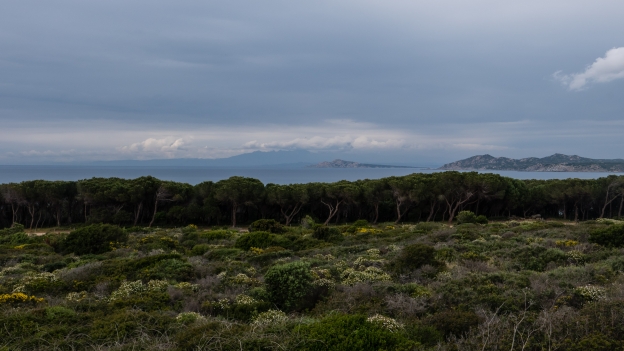 Coastal pineta on the north west coast of Sardegna. The coast of Corsica is in the distance

Palau to Santa Teresa Gallura and the Capo Testa

Coming out of Palau you can follow the SS113 towards Santa Teresa Gallura or take a detour along the coast.

If you want to take the detour, turn right at the round­about following the signs for Porto Rafael and ignoring the signs that say tutte le direzioni. As you climb, there are some great views back over the beach at Palau and the light­house. In the distance, high on a rocky hill, you should be able to see the Fortezza di Monte Altura built in the 19th century to defend the straits. 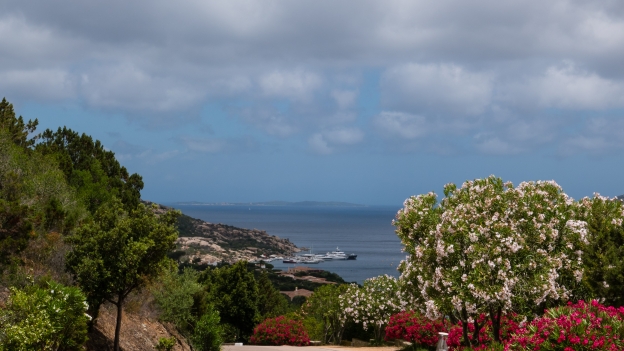 The road to Porto Rafael near Palau

You don’t go all the way into Punta Sardegna but instead, you get to a fork in the road, follow the signs for the Costa Serena (the road with lots of speed humps.). There’s a bit of a steep climb from here, and then another lovely descent with more wild rock forma­tions. The road skirts past the private Costa Serena condominio . Eventually, you come out onto the SP98. Turn right if you want to go to the resort of Porto Pallo, otherwise turn left to rejoin the main SS133.

The SS133 was a pleasant surprise: much quieter and more scenic than I had expected.

On the way to Santa Teresa di Gallura is the village of Porto Pozzo. 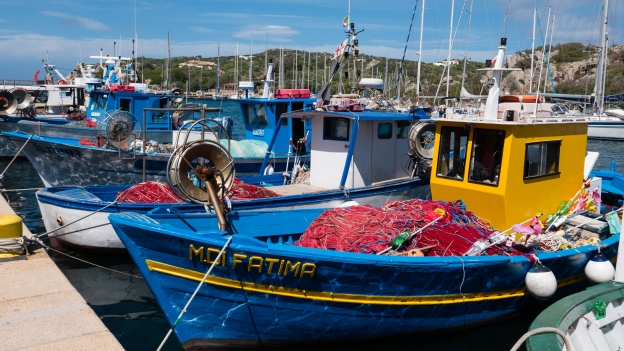 Fishing boats in the port at Santa Teresa Gallura

Santa Teresa Gallura feels like a new town, with lots of new buildings, done up to look older. It doesn’t quite pull off the trick, but still it’s a nice place, and especially with the houses painted golden yellow, pink, sky blue, emerald green.

The Torre Aragonese (Torre Longonsardo) is an oblig­atory stop. Admission costs 2€ and from the top you can see all way to the cliffs of Bonifacio in Corsica. Opening hours are 10:00-13:00 and 16.00-20.00 - open every day from April to October (check opening hours and prices)

The tower is one of 70 or so along the island’s coast. They were built in the 17th century when the island was under Spanish control in an effort to defend against pirate raids. You’ll find very similar towers along the coast of neigh­bouring Corsica and southern Italy. 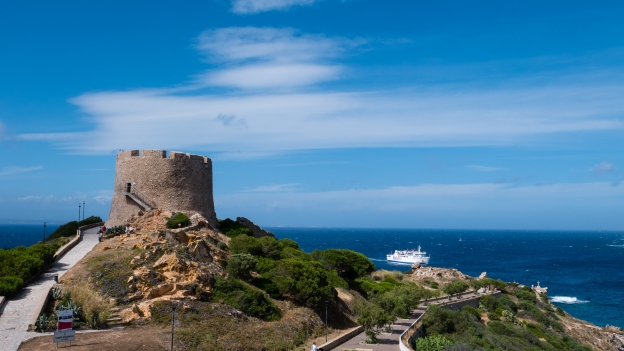 The dramatic headland of the Capo Testa with its white light­house is defin­itely one of the highlights of the northern coast. The landscape is in a lot of ways similar to parts of the southern coast of Corsica with rock forma­tions of pink granite. Nearby there are the remains of a quarry - the cave romane which were probably the source of the columns used in the Pantheon in Rome. The road ends at a gate, and from here you can walk up to the old light­house that offers a superb viewpoint. 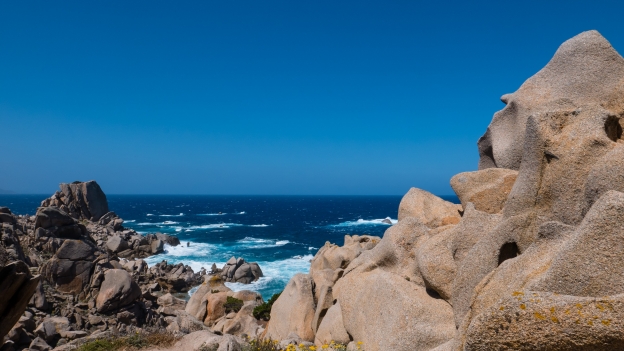 On the road to the capo is the Lu Brandali arche­olo­gical site which is also well worth the visit. You can’t visit the nuraghe itself for safety reasons, but the village and the tomba dei giganti are inter­esting. The village is, bit-by-bit being excavated by volun­teers with digs taking place for two months each autumn (more inform­ation on volun­teering). The site is open every day from 9:30 to 18.30. Admission is 2€ but its worth paying the extra to do a guided visit. The visits are at 9.30-10.30-11.30-16.30-17:30 from April to 15th September (check opening hours and prices).

The Lu Brandali site is also a reserve for a species of tortoise that is in danger of extinction because it is a particular delicacy for the local wild boar, and, unfor­tu­nately for the tortoise, it has a soft shell. 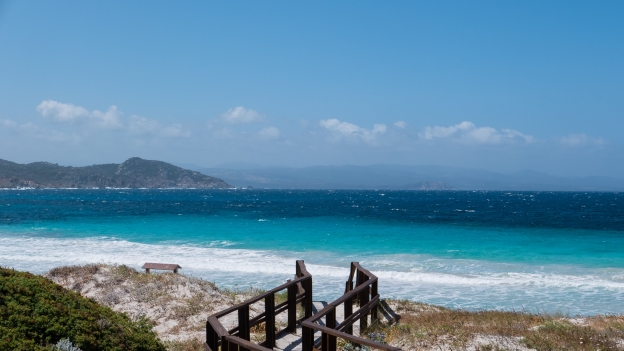 Beach near the Capo Testa

Capo Testa to Vignola and Castelsardo

From Capo di Testa you need to turn back towards Santa Teresa Gallura and then turn right onto the SP90 that (literally) heads straight out of town. Once you get clear of Santa Gallura the road continues on a largely unspoilt section of coastline with a beautiful coastal pineta.

The first stop along the way is Vignola where there’s a campsite and a couple of hotels, and a very nice beach (with a torre aragonese) — and that’s about it.

The section between Santa Teresa Gallura and Vignola is relat­ively flat, but there’s more climbing between Vignola and Castelsardo, although nothing major: a couple of climbs of more than 150 metres altitude gain and a high point of a bit over 200 metres. The compens­ation for the extra climbing is the views - in this case overlooking the Costa Paradiso, including the coastal resort of Isola Rossa and the nearby red rocks that give the place its name.

After Paduledda there’s a glorious descent down towards the Golfo dell’Asinara. You come to a fork in the road where you have the choice of following the scorrevole (fast) version of the SP90 or the panor­amica version which takes you into and down towards the town of Valledoria. Sadly the panoramic version, which crosses reclaimed marshland in the estuary of the Coghinas river isn’t partic­u­larly panoramic. Valledoria has a couple of campsites as well as places to stay and places to eat, but otherwise, you might be tempted to take the fast version of the road.

Coming out of Valledoria you rejoin the main road. The road itself is quite scenic, the countryside is beautiful, but the traffic is fairly fast-moving (although not heavy). I was quite glad when the sign for Castelsardo came up, and I was able to turn onto a quieter road. At Multeddu you join the SS 134 which heads for Castelsardo. Along the way there’s a nuraghe (the Nuraghe Padaju). The road also has the advantage of avoiding a tunnel. If you like, you can also make a short detour to the Roccia dell’Elefante — a rock formation shaped like an elephant.

The first glimpse of Castelsardo is a memorable one. A small island linked to the mainland with the old city at the top — on one side the old castle and on the other the campanile of the cathedral.

The city was founded by the Genovese Doria family, and the castle and forti­fic­a­tions have remained largely unchanged. The watchtowers are as described by the Aragonese viceroy in 1628. The old town is still pretty authentic despite being a favourite for day-trippers and coach parties. In the evening the centro storico is very peaceful and a delight to wander round.

If you have the energy the road will take you to the bottom of the castle walls (follow the signs for the centro storico) you will to you will need to leave your bike outside the centre itself. 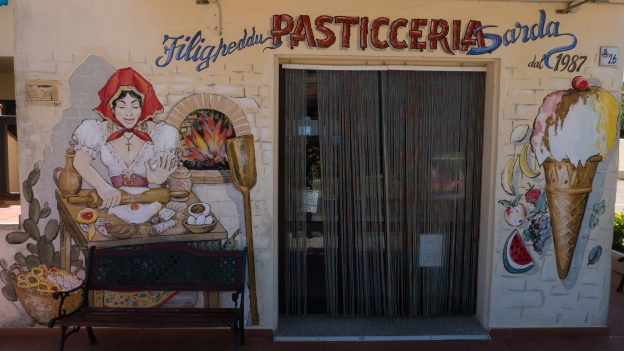 The coast after Santa Teresa Gallura is relat­ively undeveloped so there are fewer accom­mod­ation options. Castelsardo and nearby Lu Bagnu are the best bets for hotels and B&Bs, although there are several hotels around Vignola including the:

The Ostello Golfo dell’Asinara is in Lu Bagnu near Castelsardo.

I stayed at the

There are a couple of sites at Valledoria which hadn’t yet opened when I passed through.

There are ferry services between Santa Teresa Gallura to Bonifacio in Corsica. The two ferry companies are Moby Lines and Blu Navy

There are few places to eat or drink between the main towns. 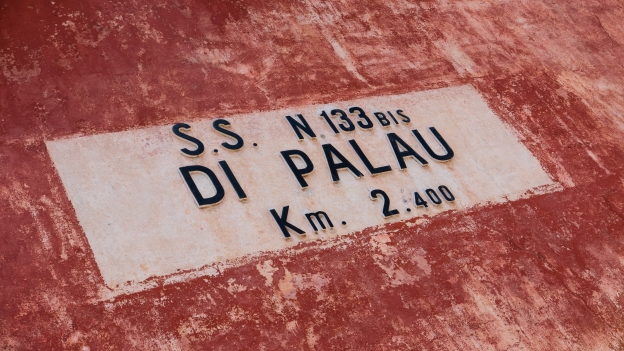