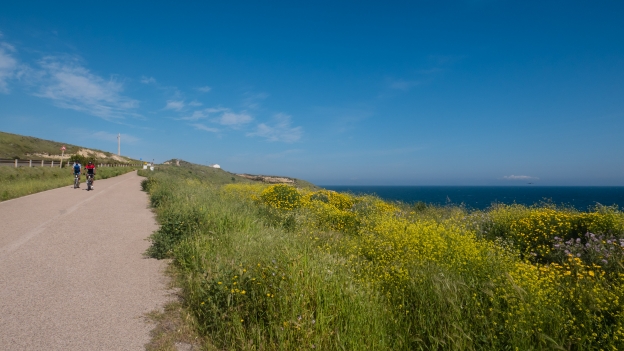 Cyclists on the cycleway between Balai and Porto Torres

From Castelsardo the route continues through the dunes and coastal pine woods to the city of Porto Torres and then on to the former tuna-fishing village of Stintino.

This area has some of northern Sardegna’s best beaches, and is surpris­ingly undeveloped. Beaches convenient to the route include the Marina di Sorso between Castelsardo and Porto Torres

The most famous beach near Stintino is probably the Spiaggia La Pelosa on the peninsula north of the village, but other options include the Saline and Ezzi Mannu beaches 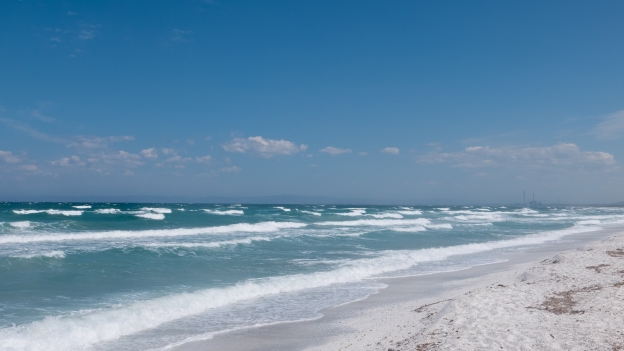 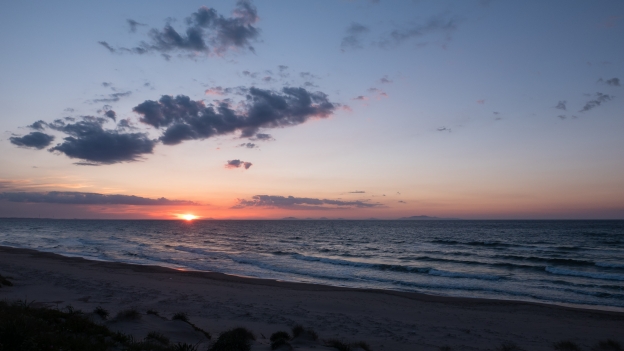 Sunset over the Golfo dell’Asinara

Coming out of Castelsardo there’s a stretch along the lungomare passing the port. You then pick up the SS 200 (signs for Lu Bagnu). There’s a short climb, at the top, and just as the road bends, it’s worth taking a moment to have a look back over Castelsardo.

The road takes you through the pleasant resort of Lu Bagnu and on towards the Marina di Sorso. The road from here is absolutely glorious taking you through a mixture of dunes and coastal pineta with very little devel­opment. It passes the Stagno dI Platamona lagoon where there’s a visitor centre, and in theory a tourist inform­ation office – although it wasn’t open when I passed by. The tourist inform­ation office also has a ciclo-officina (bike workshop or repair facility), but this was also closed. 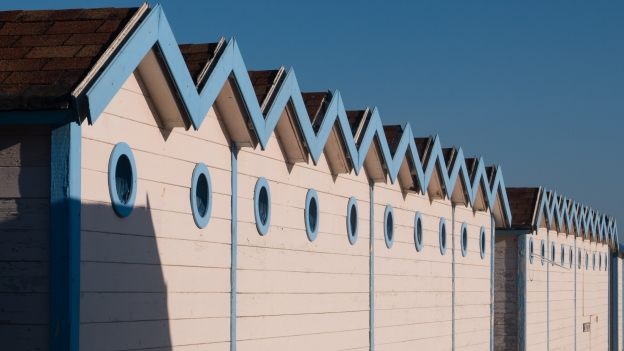 Look out for the Torre di Abbacurrente on your right-hand side . There’s a short track that takes you down to the tower itself. Worth a short break.

On your right-hand side as you come towards Porto Torres you’ll come to a circular blue-and-white sign for a cycleway. The first section of this is a section of old road along the cliff-top. At the top, at Balai Lontano, you come to a little white-painted chapel dedicated to San Gavino.

Look in the other direction and you have Porto Torres with the red and white striped chimneys of the power station and the white windmills of a wind farm.

The cycleway along the cliffs and the lungomarewas an unexpected delight. The surface has deteri­orated a little at some points, but alongside there’s a quiet minor road which you can use if you prefer. The cycleway comes to a little park, with a small beach, and picnic tables.

The cycleway takes you past another little chapel dedicated to San Gavino (San Gavino a Mare). San Gavino is the local saint, patron saint of Porto Torres, and still very popular (if that’s the right word). A roman officer in the 3rd-century Roman colony here, he was ordered to take two Christian priests (Proto and Gianuario) to prison, but along the way he became a convert himself and set them free. He was in turn beheaded.

The little chapel of San Gavino a Mare is defin­itely worth a visit. On the left-hand side there is a chamber excavated out of the rock. By the light of the candles you can make out three figures: San Gavino himself plus Proto and Gianuario.

After San Gavino a Mare the cycleway continues on along the lungomare enabling you to ignore the one-way system and take the direct route into the centre of the town. 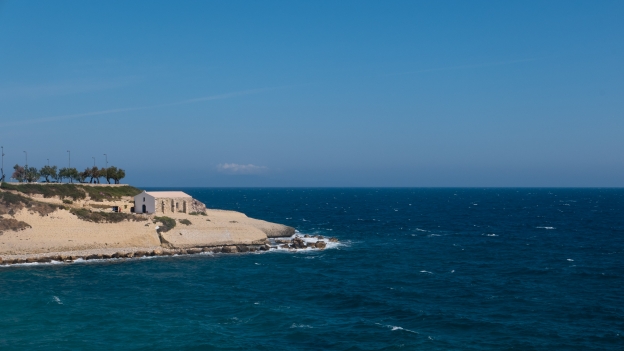 Balai (Porto Torres): the church of San Gavino a Mare

Porto Torres (Turris Libyssonis as it was called) was an important port city under the Romans —the modern port is built on the found­a­tions laid by the Romans. You can visit the remains of ancient Turris Libyssonis. Otherwise the main sight is the romanesque Basilica di San Gavino (en.wikipedia.org: Basilica of San Gavino)

The cycleway takes you to the gates of the porto turistico - the ferry terminal is a little further on. As you skirt around the port area, you come to the Stazione Marittima (ferry terminal) and a little way after is the archae­olo­gical site of the remains of the old Roman city. At the next round­about, left on the via Ponte Romano ignore the road sign for Stintino and turn right and go over the old Roman bridge. There’s a section where you can see the original surface.

After the Roman bridge, the route continues through the industrial/commercial hinterland of Porto Torres picking up the SP 34. As much as I like to a positive spin on things, even I could not describe this section as scenic, but it’ll soon be over. Outside Porto Torres come to a round­about where you have a choice of road: you can either take the fast road (scorrevole) option or the quiet road. I chose to quiet road. There’s no difference in terms of distance.

The quiet road wasn’t quite as quiet as I expected. The reason was a rubbish tip about mid-way, but on the whole it was quite an enjoyable ride.

Eventually come to a round­about in the village of Pozzo San Nicola. At this point you can then turn left and follow the signs for Palmadura and Alghero. Otherwise head straight on towards Stintino.

As you approach Stintino look out for the the World War II machine gun emplace­ments dotted over the fields on your right.

The road into Stintino takes you past the saline salt lagoons, and one of the island’s most unusual beaches the Spiaggia delle Saline: a dazzling white stretch of crystalline beach (which I assumed was salt but I didn’t do a taste test). 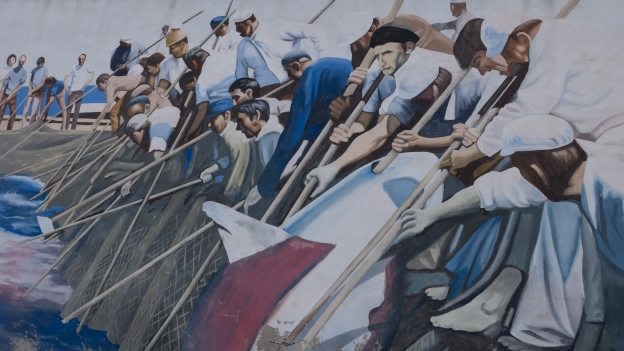 After the saline there is a short stretch of cycleway across the causeway. At the end of the causeway turn right onto the on the strada panor­amica that takes you into Stintino. As you follow the road look out for the old tonnara (tuna processing plant, now converted into a hotel) on your right hand side.

Around the harbour there are a series of photo­graphs commem­or­ating the Stentino’s tonnara sadly, a number of the pictures are now badly faded. The photo­graphs celebrate both the men involved in the tuna fishing, and the women who were involved in the prepar­ation and processing of the tuna there is a charming set of group photo­graphs of the employees of the tonnara from the 1930s.

If you’re travelling between May and September you can visit the Museo della tonnara di Stintino in the Via Lepanto on the left as you come into town (check opening times: mutstintino.com: opening times) .

The museum has posted an inter­esting video (subtitled in English) about Stintino and the tonnara.

The harbour itself is as pretty as they come with a extraordinary range of tradi­tional fishing boats. I have to say, that I expected to be under­whelmed by Stintino but in many ways I was charmed. Out of season it’s a lovely place to be. (What it’s like in the high tourist season is another matter).

After Castelsardo you could head for Alghero via Sorso and Sassari, and then the SS127 Bis to Alghero.

If you have the time you could visit the Asinara national park famous for its white donkeys. If you have an off-road capable bike you can take it on the ferry-boat from Stintino to the island. Delcomar also offer a twice-daily ferry service from Porto Torres (Delcomar Porto Torres-Asinara timetable).

There are two or three hotels at Valledoria. Porto Torres has a couple of hotels and a couple of B&Bs.

Out of season there are plenty of bargains to be had around Stintino, but check the location of the place you are planning on staying as the hotel may be convenient for the beach but not so convenient if you want to have dinner in Stintino itself.

I stayed at the Camping Li Nibari Marina di Sorso. It’s close to a really good beach with an excellent restaurant just up the road (La Riscadda). There’s also the Camping Golfo dell’Asinara which hadn’t yet opened when I was in the area in April.

There are rail stations at Porto Torres and at Sassari the provincial capital.

From Porto Torres you can get ferries to Toulon, Marseille and Barcelona as well as to Genova.

Restaurants. I would highly recommend the Trattoria Opera Viva in Stintino and the and La Risacca at the Marina di Sorso. 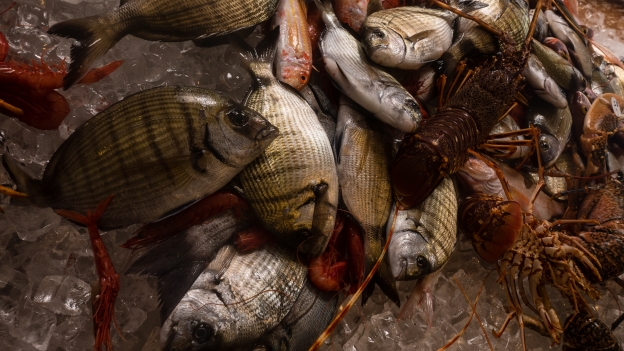