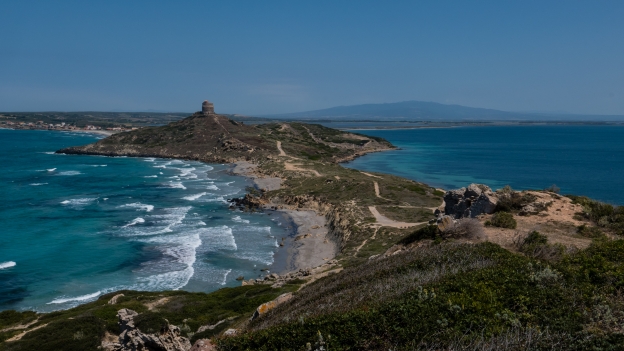 Surfaced for the whole way.

This section of the route follows the western coast to the Capo San Marco, with the ruins of the ancient city of Tharros, its Torre Spagnola and light­house. On the way there don’t miss the village of San Salvatore and its church.

S’Archittu to the Sinis peninsula

Heading towards Oristano as road passes through open countryside of wheat­fields. I turned right off the SS292 to pick up the SP10 towards Putzu Idu. At the next junction take the SP80 towards Su Pallosu where there’s a bay and a headland overlooking the Capo Mannu, and a stretch of deserted beach.

The road passes the cat colony at the Colonia Felina di Su Pallosu (guided visits by appointment only). In a web survey by the FAI (Italian equivalent of Britain’s National Trust) the cat colony and beach at Su Pallosu was voted as Sardegna’s top Luoghe del Cuore (‘places of the heart’ - a survey of all the small and large treasures that people love and want to see protected).

On my way to the Capo Mannu I had begun to wonder whether I had made a mistake, but the capo itself is well worth the detour. From the capo you need to retrace your steps towards the towards Putzu Idu. A closed road takes you between the beach and the lagoon to the village itself. Putzu Idu is a low-key resort: a couple of restaurants, a hotel, an agrit­urismo and that’s about it.

Coming out of Putzu Idu pick up the SP66 which takes you south towards the Sinis Peninsula. The route passes to the west of the Stagno Sale ‘e Porcus - an inland salt lagoon. In summer the water evaporates entirely leaving the white bed of the salt-pan.

At the next junction turn right onto the SP7, follow the signs for this San Giovanni di Sinis, Cabras and Is Arenas. This road takes you to the west of the Stagno di Cabras. Along the way you have the option of turning off for the beach at Is Arutas. 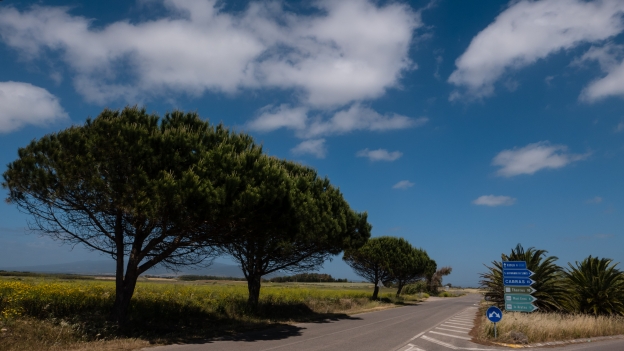 Junction on the road to San Giovanni di Sinis

Just off the SP7 is the village of San Salvatore. The little church itself is something special. This has been a place of worship for more than three millennia. Go down the steps into the ipogeo a series of chambers excavated from the rock. The walls and ceilings were originally painted. According to the experts, there are inscrip­tions in punic, latin, greek and even Arabic, as well as both pagan and christian symbols. The church and ipogeo are open every day between April and October from 9.30-13:00 and 15.30-18.00.

The village itself is an extraordinary sight with its single-storey cottages cumbessias. The cumbessias were built to provide accom­mod­ation for pilgrims parti­cip­ating in the annual festival the Corsa Degli Scalzi when people from Cabras run, barefoot, the seven kilometres from Cabras carrying an image of San Salvatore and the next day run back. The festival, which takes place in the first weekend of September, commem­orates the occasion when people ran to the village to rescue the image of the saint from an imminent pirate raid.

San Salvatore is also known for being a location for spaghetti westerns. Sadly, the truth is that there was only one film shot there in its entirety - Giarrettiera Colt (Garter Colt). Most of the ‘spaghetti westerns’ were shot in the Almería area in southern Spain. 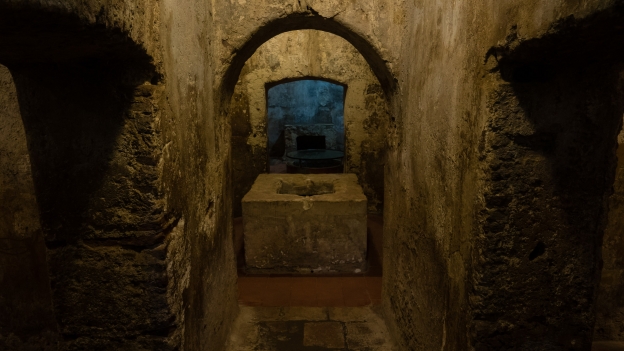 Tharros and the Capo San Marco

Shortly after San Salvatore you come to the junction with the SP6 which takes you to the arche­olo­gical site of Tharros and the Capo San Marco. Alternatively you can turn left for Cabras, Oristano and Torregrande.

As you ride you should be able to to see the Torre Spagnola in the distance. The Capo is a popular tourist destin­ation, but the road is still relat­ively quiet.

If your legs won’t take any more, the trenino looks tempting, but the best option is to continue along the road to the bigli­et­teria (ticket office) a kilometre or so further on. I left my bike in front of the ticket office. The staff were very friendly and helpful, but obviously a lock is a good idea.

The Torre Spagnola overlooks the arche­olo­gical site of the remains of the city of Tharros. And, as if one tower hasn’t enough, from the top you can see a second tower (the Torre Vecchia di San Marco) further along the cape. The advice of the staff was to go to the tower first to get a panoramic view of the whole site. If you’re a real cheapskate you can climb to the foot of the tower and avoid paying a couple of euros but it’s defin­itely worth the money (3 euros) for the view from the top.

It’s a memorable moment walking down the decumano (main street) into Tharros itself with the remains of the old city below you on the headland, but for me, the site lacked the human interest of the other city sites on Italy where you can still see the evidence of daily life. In Tharros there are the remains of the water reservoir, a couple of temples and a couple of baths but not the remains of things like shops and bars that make the other city sites inter­esting. I preferred the Nora arche­olo­gical site further south.

For me the highlight was continuing on along the headland to the light­house. This is probably only feasible if you are visiting on a day-ride (and even then with a mountain bike or a trekking bike). But you can walk to the old necro­polis - where there’s a great view looking back over Tharros and the Torre Spagnola. There’s also a nice-looking beach along the way. 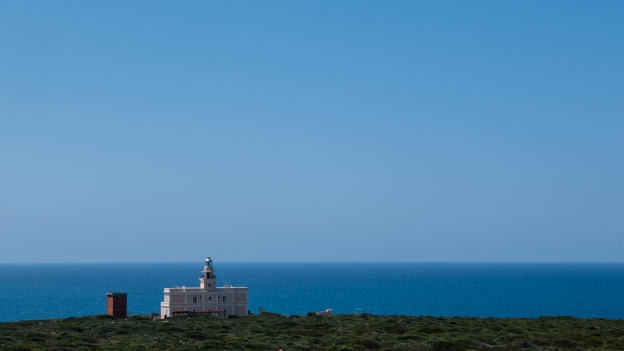 Lighthouse on the Capo San Marco

From the Capo San Marco to Oristano

Leaving the peninsula, the SP6 passes between the Stagno di Mitras, to the right, and the Stagno di Cabras, to the left, passing yet another tower (the Torre Puttu). In the distance on your left you can see Cabras and the dome of the Chiesa di Santa Maria and next door its campanile (bell tower).

The SP6 comes to an end at a cross­roads where you have the altern­ative of going straight on for Oristano, left for Cabras or right for Torregrande.

If you’re inter­ested in the island’s ancient civil­isa­tions then you’ll want to visit the Museo Civico Giovanni Marongiu in Cabras. The most famous items on display are the statues from the necro­polis of Mont’e Prama. The more-than-life-size statures depict warriors, archers, and boxers. Sadly though they were sculpted from very soft limestone, so the exhibits have been recon­structed from the badly-worn fragments (there were 5000 fragments found at the site, and you can watch a video of the restorers at work on the seemingly-impossible job of putting the fragments together).

Sardegna Turismo (Allways Sardinia) have made a short promo­tional video.

Torregrande’s main claim to fame is that it has a torre grande (big tower) and it is indeed a big tower - the largest of the coastal defensive towers on the Sardegna coast. Otherwise, it’s a quiet resort (out of season at any rate) with a long stretch of sandy beach. There’s a campsite a bit further on (the Spinnaker)

From Torregrande there’s a pretty decent cycleway (on the right-hand side of the road) that takes you all of the 6 km or so into Oristano. When you come to a round­about follow the signs for Oristano not Oristano Nord this takes you over the river and along the main road into town. The cycleway passes the modern large Hostel Rodia.

After the cycleway I thought that Oristano would be a pretty bike-friendly place. Then I hit the one-way system which is a bit of a nightmare: if you have a GPS this is the time you might want to use the auto-routing option. Oristano is the provincial capital and is of course a busy working town, with a traffic system is designed to route cars around and through the town and away from the centre. And it does a pretty effective job: when you do eventually manage to find your way into the centro storico it’s tranquil and calm and pretty much car-free. There’s a pedes­trian zone: bikes are allowed to use it, but the signs in the entrance say that you should limit your speed to walking pace (5km/h).

Oristano is famous for the La Sartiglia festival which takes place in Carnival week (In 2017 on the 26 and 28 of February). The Sartiglia is said to date back to the middle ages, but its icono­graphy hints at ancient origins. The key figure in the Sartiglia is Su Componidori an enigmatic masked horseman (or woman) with a lace head dress and top hat. Su Componidori initiates the corso alla stella when the riders, going at full tilt, have to spear a small star suspended from a cord. The corso alla stella is followed by le pariglie when masked riders, riding in threes, perform acrobatic routines at full gallop. It ends with the componidori, carrying the pippia de maiu (a bouquet of violets) blessing the spectators

Unfortunately February is too early for cycle touring unless you are very hard core, but if you’re inter­ested there’s a dedicated website with lots of pictures: sartiglia.info (it/en/es).

There are hotels around Cabras and nearby Torre Grande as well as in Oristano itself.

There’s a large modern hostel at Oristano: the Hostel Rodia.

The Ittiturismo Sa Pischera ‘e Mar’e Pontis is something of a local insti­tution. If you’re wondering, an ittit­urismo is like an agrit­urismo but for fishermen. The idea is that a cooper­ative of fishermen sells the products direct. The restaurant offers a fixed menu (fixed as in you get what you’re given), of fresh fresh­water fish caught in the stagno. Be warned though that you get a big meal —mine would have literally been enough for two. Fabulous value but a bit too much. To be honest I preferred the antipasto dell chef at the Molo 21 in Torregrande.

There’s a rail station at Oristano with services to Olbia and Cagliari. 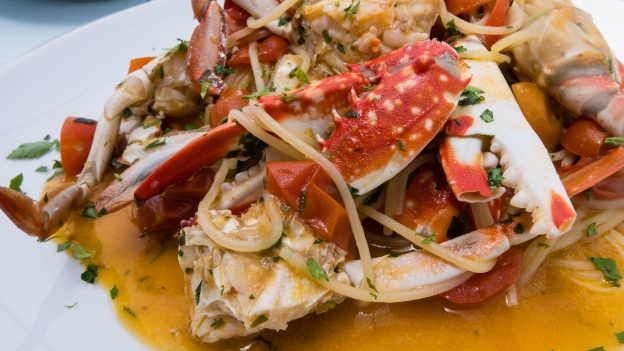