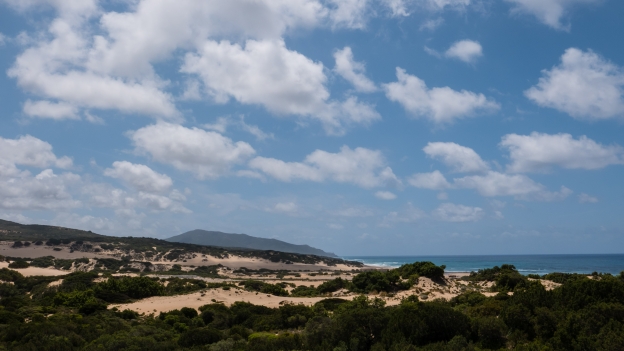 58 kms (excluding the loop along the Costa Verde)

Moderate. There are no really big climbs, but this section climbs from sea level to about 450 metres, with some ups and downs along the way.

This section of the route takes you along the costa delle miniere (mining coast) where you’ll find some of the Sardegna’s most beautiful coastline and least spoilt beaches —alongside the remains of the once mighty mining industry. It ends at the Piscinas dunes where the sand dunes can be up to a 100 metres high.

The huge and beautiful beach at Piscinas will probably be enough for most people, but there are other beaches on the Costa Verde.

The route climbs through Montevecchio (370m) and before descending via Arbus (311m) to the coast. You could follow the coast road, however there is a section of dirt road through the dunes which has been fairly badly cut up and would be difficult to ride with a loaded bike. I think the most practical option is to go via Arbus and then enjoy the Costa Verde as a loop from Piscinas. Alternatively, you could opt to stay in either Arbus or Torre dei Corsari and visit the Costa Verde, Piscinas and Ingurtosu as an unloaded day-ride.

There is a dirt road that goes direct from Montevecchio to Ingurtosu. There were strada chiusa (road closed) signs when I passed by, but I think it is still used as part of mountain bike routes. I wasn’t able to check this.

You could bypass Piscinas altogether by staying on the SS126 and not turning off to make the descent to Ingurtosu.

For thousands of years Sardegna was a centre for mining and metal­working. The Greeks came here to trade 4000 and more years ago, later they were followed by the Phoenicians, the Carthaginians and then the Romans. The bitter struggle between Rome and Carthage was at least in part a struggle for control of Sardinia’s mineral resources. The Iglesias region was the most important mining centre.

The industry continued into the 1980s and 1990s before the mines were abandoned - although Italy’s last remaining coal mine continues to operate at Monti Sinni near Gonnessa.

In a far-sighted move the regional government estab­lished the Parco Geominerario (the world’s first) to protect the the excep­tional historic and geolo­gical heritage of the area.

I don’t want to give the wrong impression: there are places where the landscape has been badly scarred by mining and there’s a lot to do in terms of restoring the derelict sites, but for all the scars this is one of the most beautiful and inter­esting parts of the Italian coast.

The mine used to produce zinc and lead. At its peak it employed 1100 people. There was mining in the area in the roman era, but the modern mine was opened in 1848 and finally closed in 1991.

If you visit the museum there are four guided visits that you can do. Each is available in Italian and English and lasts about 30 minutes. There’s a description of the visits on the Miniera Montevecchio website: minieradimontevecchio.it (it/en/fr/de). The visits are offered in series —at Montevecchio itself you can visit the Palazzo della Direzione - originally the home of the mine owner it became the offices of the management. The others are at the Piccalina mine which is a kilometre or so downhill from the ticket office. 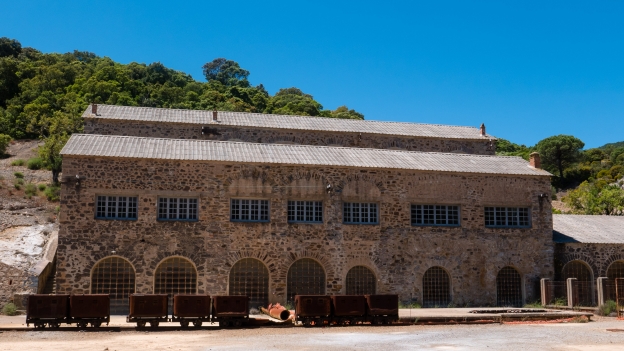 Montevecchio to Arbus and Ingurtosu

As you climb from Montevecchio towards Arbus you can see one of the mines and its associated washing plant (and tip) in the valley below along the road towards Guspini. Carrying on further you pass a number of buildings (the Villaggio Righi) which also used to belong to the mine company.

As the road (the SP 68) climbs towards Arbus there are panoramic views looking east over central Sardegna. It comes to an end out of the town of Arbus from here you need to pick up the SS 126 - follow the signs for Fluminimaggiore.

As descend towards Ingurtoso you should be able to see the dunes in the distance. 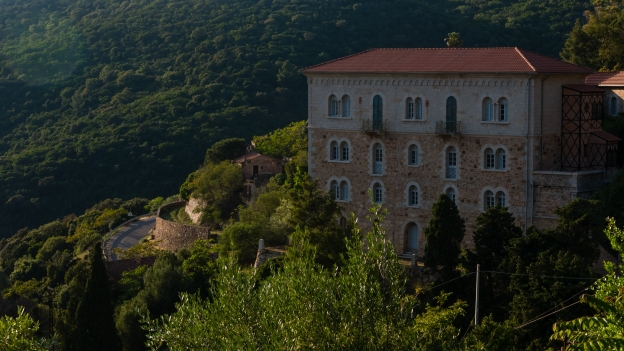 In the village there’s also the former hospital and a church dedicated to Santa Barbara —the patron saint of miners.

A little further on your right-hand side just before a hairpin bend, at the 200m altitude point is the Pozzo Gal mineshaft. You can see the restored winding tower from the road. Further downhill, at about 100m altitude, the road comes to the ruins of the Laveria Brassey. A laveria is a washing plant for separ­ating the ore from the muck. The ore was trans­ported on a little rail line from the Pozzo Gal and then on from the washery to the beach where it was loaded on to boats bound for Carloforte.

The washery is named after Thomas Brassey, an English aristocrat, who became major share­holder in 1899 and was responsible for a major expansion of the mine along with building the church, hospital and school as well as houses for the miners. Brassey seems to have been more successful as a mine owner than as a politician —he stood unsuc­cess­fully for parliament in four elections, although by way of compens­ation he did become mayor of the English seaside town of Bexhill-on-Sea. Quite possibly this ruined washery is his only memorial.

At the beginning of the 1950s the area had a population of over 1,500, but the mines went into decline and closed in 1965, and Ingurtosu and the surrounding villages were abandoned.

Just before the laveria the tarmac road surface gives way to a pavimentazione ecologica. The dirt road continues to the beach another 5 kilometres further on. The road surface on this section is in reasonable condition although there is some ‘washboarding’: the road surface is corrugated making riding surface uncom­fortable, but otherwise straightforward. 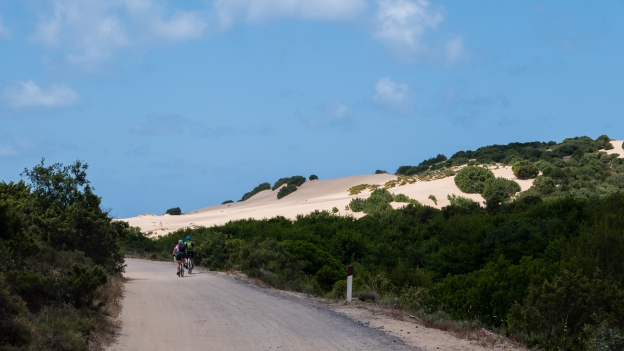 I visited the Piscinas dunes on the first day of my first-ever cycling holiday (quick hat-tip to Saddle Skedaddle). They were my most vivid memory of that holiday, so I was nervous that they would turn out to be a disap­pointment, but they certainly didn’t.

The Piscinas dunes are a truly excep­tional coastal site - with dunes 100 metres high in places. At the beach itself, there are a couple of beach bars and a hotel (the Hotel Le Dune Piscinas which is housed in the buildings that once provided storage for the mining company as well as stable for the ponies that hauled the wagons of ore along the track to the washery. You can still see a stretch of the track and the wagons in the dunes behind the hotel.

The road from Piscinas to Portu Maga and the Marina di Arbus (Marina di Gutteru e Flumini) is more tricky as in some places it has been badly carved up. It’s nothing that someone with a trekking/hybrid bike or a decent touring bike, and a sense of adventure, can’t cope with, but if the thought of a dirt road sends you into a cold sweat then this one isn’t for you. The views over the dunes really are spectacular and this is the best place to come to view them.

There are also a couple of fords. Normally these shouldn’t present a problem - other than getting your feet wet. However, both have signs warning not to cross if the river is in full flow - something to bear in mind if it has been raining heavily. 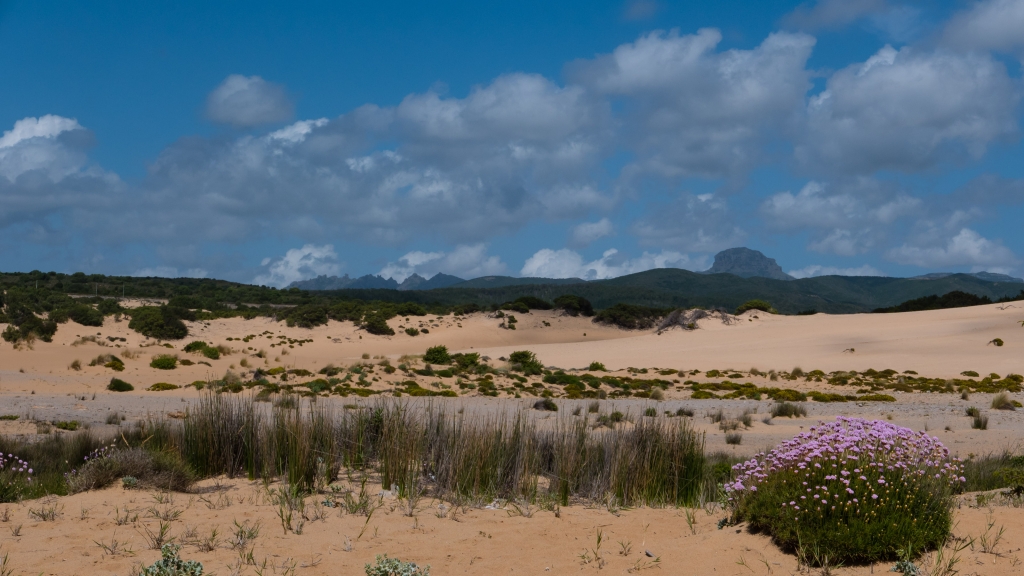 View of the Piscinas Dunes

The Hotel Le Dune Piscinas has a fabulous location in old mining buildings right on the shore at Piscinas. However with advertised prices starting at 220€ a night it’s a wee bit expensive. You may luck out and find a reduced-price room on booking.com: booking.com: Hotel Le Dune .

The Camping Sciopadroxiu also has mini-appar­ta­menti (no cooking facil­ities) on a B&B basis.

Otherwise there are some options around Ingurtoso and the junction with the main road. These include:

The only campsite is the Camping Sciopadroxiu near Ingurtoso. An informal wooded site right on the edge of the Piscinas dunes - (but a couple of kilometres of unsur­faced road (in good condition) to get to it. It also has a very good, friendly, ristorante-pizzeria.

The nearest train stations is at San Gavino Monreale. There are also stations at Carbonia and Iglesias.

At Montevecchio there’s a little bar-chiosco but it only had pre-packaged panini. Otherwise there are bars and restaurants in Arbus and on the road down into Ingurtosu.

Part way down the descent into Ingurtosu there’s a restaurant (Il Minatore) and bar (both in restored buildings that were once miners’ homes). The bar offers you not only free Wi-Fi but also a washing machine and free showers.

At Portu Maga on the Costa Verde there’s a little bar (the Bar Summer), a couple of ristoranti and a little super­market. A little further on there’s the Maestrale bar-ristorante which also offers B&B accommodation. 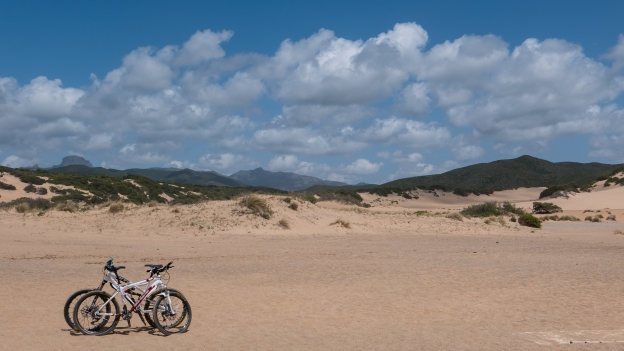 Bikes on the Piscinas beach