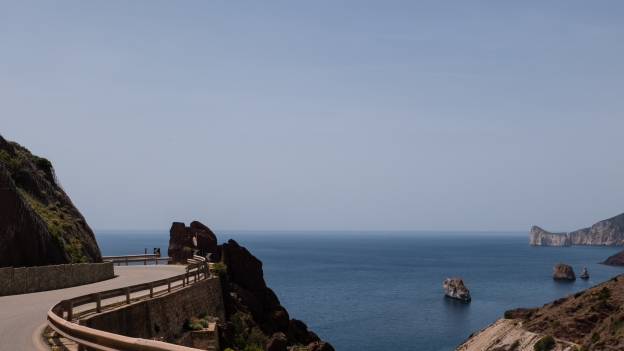 Moderate. This is the most challenging section of the route with a couple of climbs to over 400 metres altitude.

The section starts with the unsur­faced road from Piscinas, but after this it is on surfaced roads.

This section of the route continues along the costa delle miniere (mining coast). It includes perhaps the most dramatic stretch of coast road on the whole island. The section ends at Portovesme where you catch the ferry for Carloforte - arguably Sardegna’s prettiest and most inter­esting town.

Along this stretch there are some of the island’s most beautiful beaches.

There’s also a nice little beach at Masua which you could combine with a visit to the Porto Flavia.

The climb back up from Piscinas is fairly gentle. As you come to the top of the climb. Look out on the right-hand side for the cork oaks. You can tell which ones they are by the fact that the bark of the lower part of the tree is darker, showing where, in the past, it was cut away. Producing cork was once a major activity in Sardegna, but it has also gone into decline with the use of plastic stoppers and screw tops for wine. You can see a group of cork oaks on the round­about at the junction with the SS126.

Turn right at the junction, following the signs for Iglesias and Fluminimaggiore. There’s a nice relaxed stretch on the SS126 before the road starts to climb again towards the Passo Bidderdi (462m according to my GPS, and 492m according to the signs).

From the pass, there is then a cracking descent down into towards the sea on a road that offers some dramatic views. At the bridge over the Rio Mannu turn right following the signs for Buggerru. The new road is the SP83. This follows the river down to the beach at Portixeddu. 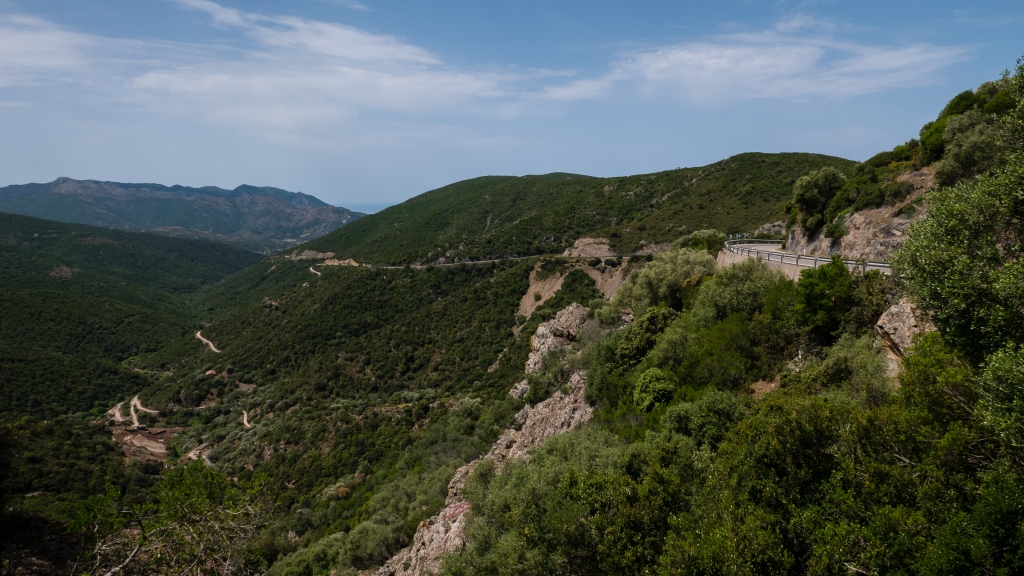 The next town on the road is the old mining town of Buggerru, which, as I am sure you’ll be wondering, is pronounced with a soft ‘g’ or a ‘j’ sound (so more like the French bouger or English budge and defin­itely not with a hard ‘g’.

The road reaches the coast at the Portixeddu (Spiaggia di Buggerru/Spiaggia San Nicolao) another set of beautiful sand dunes and a pretty beach with fine sand. As you pass the beach at Buggerru you can see the cliffs of the headlands before you as the coast becoming more jagged and rockier. 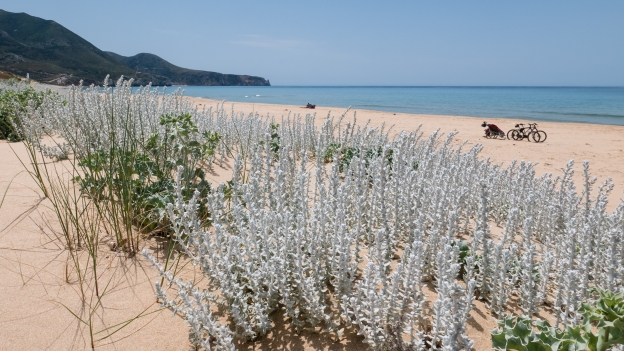 The initial approach into Buggerru is pretty unattractive but the village itself is much nicer.

Buggerru is, or was, a mining town, and was the scene of bitter conflicts between miners and the mining companies: miners were poorly paid and the work was dangerous; they had to shop in company shops, and even had to pay oil for their lamps and for water. In 1904 the shooting of three miners during a demon­stration in front of the companies offices sparked a nation-wide general strike.

Today the major remains of the mine are the Galleria Henry. A tunnel built to carry the ore from the mine to the washing plant a kilometre away before the construction of the tunnel, the ore had to be carried by mule. If you visit you get to ride on the little trenino as it threads its way along, and through, the cliffs. The galleria is open from Monday to Friday between 9:00 and 13.00. If you want to reserve a place on one of the guided visits you have to phone (+39 0781 491300 or +39 388 932 3529) . Check times and prices: igeaspa.it.

The initial climb out of Buggerru was hard going —but that might just have been the effects of lunch. It defin­itely seemed to get easier after the bend in the road. The views from the top from the Punto Panoramico make up for the effort.

After the climb out of Buggerru the road levels out, and the section where you can see as far as the Isola San Pietro. The road descends from the altopiano, at the bottom there is a turning for the beach at Cala Domestica. Set in a horseshoe-shaped cove, with a watchtower (of course), it’s one of the most famous and photo­graphed beaches in the area. From the pictures, it looks lovely, and it isn’t a partic­u­larly long detour if you have time.

At the top of the climb there are sections that are signed as 10%. But looking on the bright side you could have come from the other side where there are signs saying it is 13% (and I could believe it). This is defin­itely a dramatic stretch of road. The most dramatic moment is when, between the sides of the ravine, you get your first glimpse of the Pan di Zucchero, a 133-metre-high rock formation that juts out of the sea like a rocky iceberg.

The bend in the road brings you to Masua, and below is the mine. With wagons waiting to be loaded at the railed it looks as it might have looked on the day it was closed and abandoned. 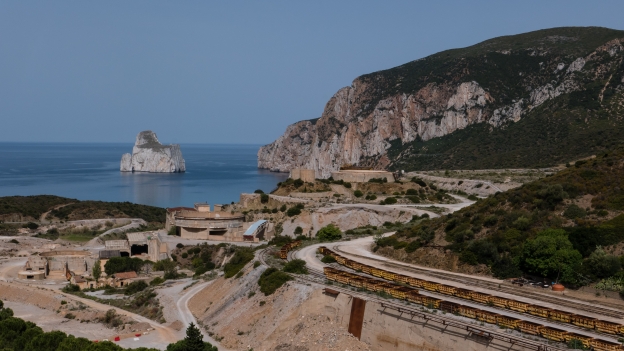 Masua: the Pane e Zucchero with the disused mine in the foreground

Masua is the location for another of the areas mining historic sites, the Porto Flavia. The tunnel was built in 1924 to enable the ore to be loaded directly into the hold of sea-going ships —before that the ore, in wicker baskets, was loaded on the beach into small boats that then sailed to Carloforte where it was then loaded onto ships.

Show more about the Porto Flavia

The Porto Flavia consists of two tunnels –one about 20 metres above the other– with silos excavated from the rock between them. The ore would be carried by a trenino in the upper tunnel and loaded into the silos. When a ship arrived the silo would empty the ore onto a conveyor belt in the lower tunnel which would lead to the hold of the ship. The opening of the Porto revolu­tionised the fortunes of the mine: cutting costs by 70 percent. There’s a very good wikipedia article about the history and construction: en.wikipedia.org: Porto Flavia.

If you’re wondering, the Porto Flavia is named after Flavia Vecelli the daughter of Cesare Vecelli the engineer responsible for designing and building the tunnel. 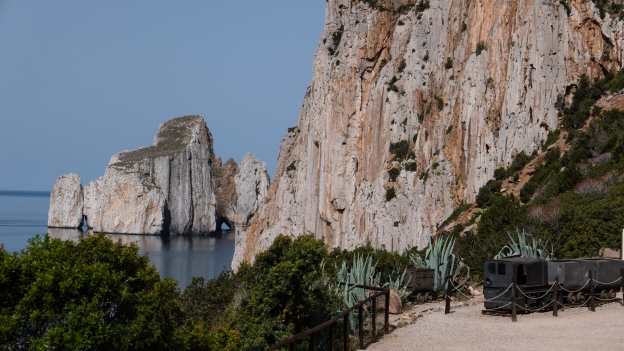 The Porto also offers a fabulous view of the Pan di Zucchero.

There’s a campsite at the beach. The facil­ities are basic but you can eat at the beach bar. It’s open from April until October. 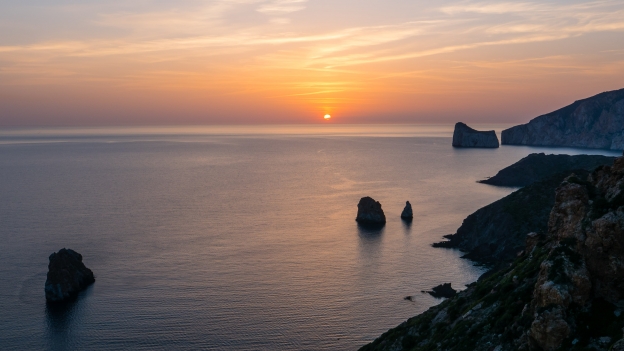 From Masua there’s then a short climb to Nebida (175m). Even if you decide to give the Porto Flavia a miss, the belvedere at Nebida is a must-see. Originally constructed for mining opera­tions, the belvedere is a circular walkway that goes round the cliffside. It’s open all the time and it’s free. It offers superb views over the Pan di Zucchero and the other cliffs, as well as the remains of the Laveria La Marmora which has become almost an icon for the area.

At Nebida it’s time to leave behind the costa delle miniere. There are two options: you could continue following the coast, or you could head for Portovesme (Portoscuso) and take the ferry to Carloforte the Isola di San Piero one of the two islands off the coast — the other is the Isola di Sant’Antioco.

The descent from Nebida is as dramatic a stretch of road as I’ve encountered anywhere in either Italy or Corsica. Eventually, it comes to an end at a beach, the Spiaggia Fontanamare, a huge expanse of almost-deserted pale golden sand.

The road then heads inland skirting round expanse of wetland before rejoining the SS126. Turn right following the signs for Carbonia and Iglesias as the road heads south skirting round Gonnesa. A little further on you come to a round­about with a pizzeria on the corner, continue straight on and at the next junction turn right following the signs for Portovesme.

This new road is the SP108, it climbs to the altitude of about 125m before starting a long enjoyable cruise down towards the coast at Portoscuso/Portovesme. Soon the red-and-white chimneys of Portoscuso come into view, and the surrounding them what seems like a small thicket of wind turbines (I counted 36). At the round­about follow the signs for the porto. As you come into the car park in the port the Stazione Marittima (ferry terminal) and ticket office is to your right. The quayside is to your left.

The single fare (andante solo) for me and my bike was 6.50€. The journey takes about 40 minutes. You can check the ferry times on the Delcomar website: delcomar.it: Tratte e Orari.

You could also stay on the SS126 and continue on to Fluminimaggiore rather than turning off to Portixeddu. The SS126 continues on to Iglesias with its medieval centro storico. A couple of kilometres off the road is the Tempio di Antas (Temple of Antas). 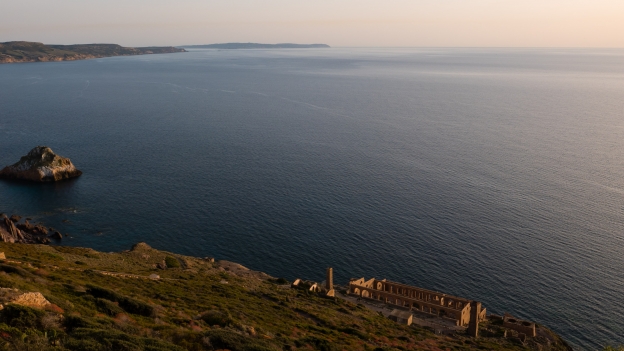 This stretch of coast is a little off the tourist track so accom­mod­ation options are a bit limited. Fortunately visitsulcis.it has a useful accom­mod­ation-search engine.

One accom­mod­ation option you might want to bear in mind is the Agriturismo Sa Rocca on the SP83 before you get to Nebida.

There are a couple of campsites on this stretch of coast.

On the way to Buggerru I passed the campsite Ortus Di Mari. It doesn’t have a website, but according to Google, its phone number is +39 0781 54964.

There’s also a campsite at the Masua beach: the Nuova Colonia. Its main business is campervans, but it also accepts tents. The facil­ities are basic, but you can eat at the beach bar. It’s open from April until October.

There are train stations at Iglesias and Carbonia —both are fairly close to the route.

I lucked out in finding a couple of good restaurants: 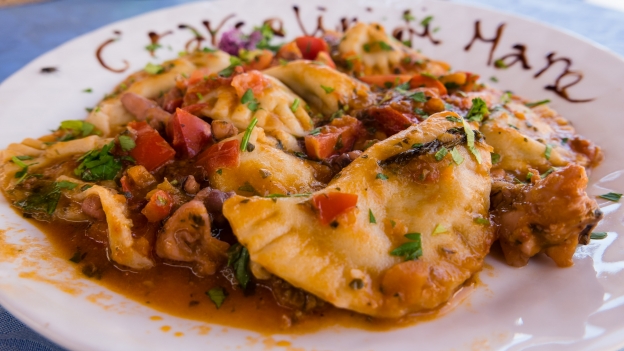 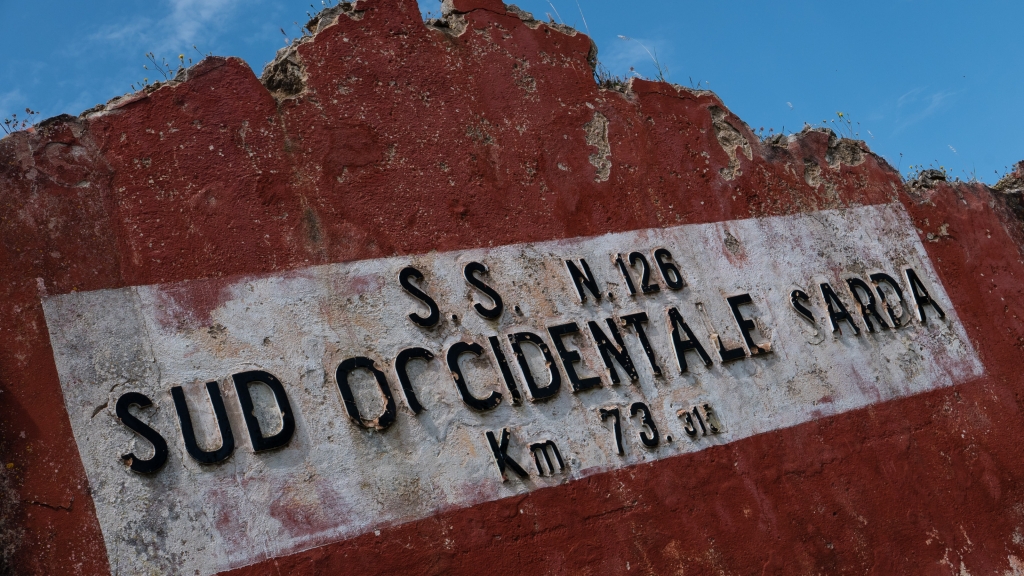 Sign on a disused maintenance depot near the Passo Bidderdi