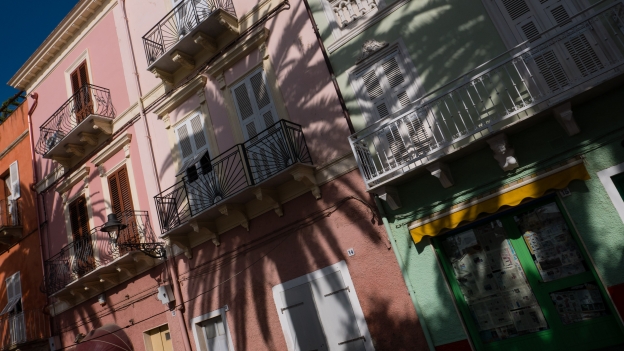 Carloforte shadows of palm trees on the houses on the lungomare

All on quiet roads

This section is entirely on surfaced roads in good condition.

A short tour of the Isola di San Pietro taking in the dramatic Capo Sandalo and a couple of the island’s best beaches. 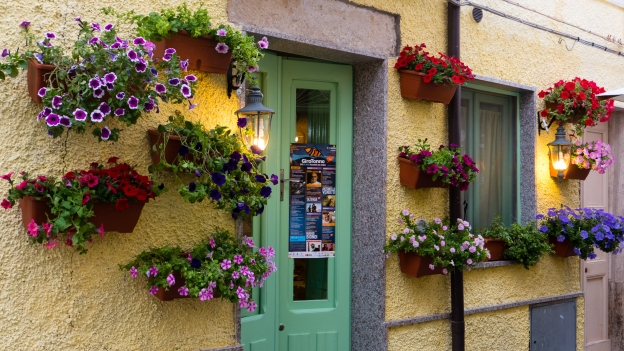 Street in the centre of Carloforte (Galaia restaurant)

Carloforte was founded in 1738 by settlers from the island of Tabarka off the coast of Tunisia. The settlers had originally come from Pegli on the Ligurian coast almost two hundred years before, and had made their living diving for coral. A combin­ation of declining coral stocks and the invasion of the island by the Bey of Tunis, led the tabarchini to approach the king of Sardegna (Carlo Emanuele III di Savoia) for permission to settle on the island.

The tabarchini turned their hands to producing salt from the lagoon at Carloforte as well as tuna fishing, shipping and shipbuilding. Refugees/migrants from Tabarka set up a second colony at Calasetta across the water on the Isola di Sant’Antioco.

Disaster struck in 1798 when 900 carlo­fortini were captured and held in Tunisia as for ransom for five years. Napoleon acted as an inter­me­diary in negoti­ating their release.

Tabarchino, a dialect of Ligurian, is still widely spoken and the area continues to have ties with Pegli and Liguria. For me, perhaps the most intriguing trace of the Ligurian heritage was finding, almost 500 years after the original settlers set off from Pegli, proper Ligurian focaccia for breakfast in the hotel I stayed at —something that otherwise you would only in Liguria.

Carloforte has its own distinctive cuisine, strongly influ­enced by Liguria but also by North Africa. At its heart is tuna . The tuna is celeb­rated in the Girotonno festival which normally takes place in the first weekend in June, but the 2017 Girotonno will run from the 22-25 June (I don’t know whether this is a permanent change of dates). The festival marks the end of the tuna fishing season when, from April to June, the tonne rosso ( bluefin tuna) come in from the Atlantic to spawn in the warmer waters of the Mediterranean. Carloforte is one of only a few places in the Mediterranean where the tradi­tional methods of tuna fishing are still practised. The method may have come here with the Phoenicians thousands of years ago. The shoals of tuna are directed through a system of nets and at a certain point they are directed into a central pen —the camera del morte (the ‘chamber of death’) where the mattanza begins.

The tradi­tional method of tuna fishing is dying out due to a combin­ation of modern factory fishing and changes to the tuna’s migration routes. 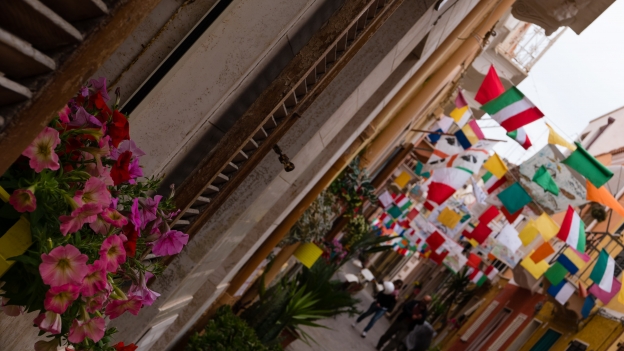 Carloforte: Via Magenta ready for the Girotonno

There’s no road around the island, instead there are three main roads leading north, west and south. This route takes you west to the Cala Fico and the Capo Sandalo, before doubling back and returning via the beach at the Cala dello Spalmatore, the Due Colonne monumento naturale, and the Spiaggia la Bobba.

The road heading south out of Carloforte (the SP104) takes you past the remains of the saline if you haven’t already seen enough rusting machinery at the mines, you have a chance to see some more here, as well as, if you’re lucky, flamingos. The lagoon is now a nature reserve and according to the local tourist inform­ation website (carloforteturismo.it), it is home to 500 species of birds. After the saline turn right onto as the SP 104 heads for the Capo Sandalo. 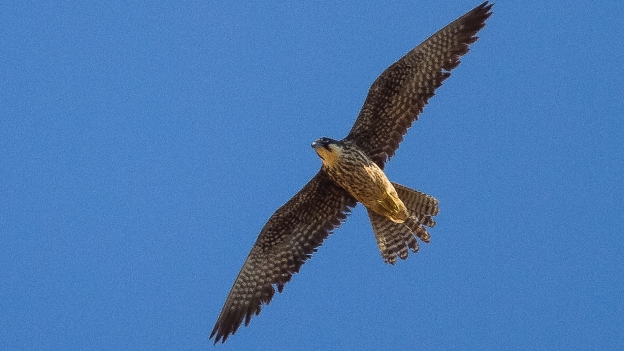 The Island of Falcons

Before you arrive at the capo it’s worth making the brief detour off to you right to the spectacular fjord of Cala Fico. The Cala Fico and the Capo Sandalo are home to the Oasi LIPU di Carloforte bird reserve. The reserve exists to protect the falco della regina (Eleonora’s falcon) whose name comes from the Queen Eleonora of Arborea who as long ago as 1400 passed a law to protect the bird.

The island’s original name was the Isola degli Sparvieri - the island of sparrow­hawks; the name has its origins with the Phoenicians and was adopted by the Greeks and Romans.

The falcon is under threat, but the reserve is visited by 100 pairs of falcons who arrive here from Madagascar, Mauritius and the Seychelles from late May onwards. There are some fabulous pictures on the Carloforte Tourism website carloforteturismo.it: Birdwatching in the LIPU oasis.

carloforteturismo.it have produced a nice one-minute video with aerial views of the Capo and the lighthouse:

From the Cala Fico it’s a short ride to the end of the road at the Capo Sandalo. There’s a footpath that leads from the parking area, it’s worth continuing on on foot as for some of the best views you need to go almost to the very cliff edge. Be careful if you have cycling shoes without grippy soles.

There’s also a light­house at the capo, but it’s still in operation so you can’t visit it.

Returning, you need to retrace your steps back to the junction with the SP103 where you turn right following the signs for Le Colonne. At the next junction turn right for the Cala Spalmatore and the La Caletta (the cove) beach. 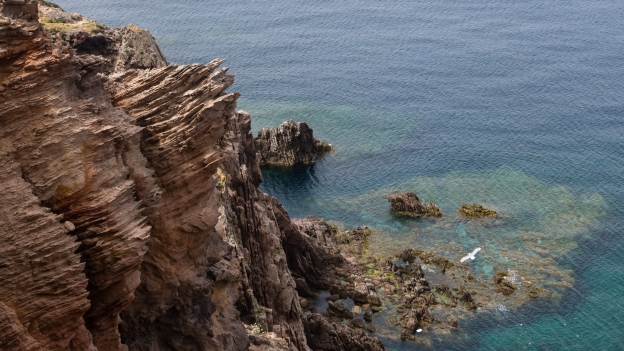 Cliffs at the Capo Sandalo

Le Due Colonne and the Spiaggia La Bobba

From the beach you double back again, but at the junction continue straight on in the direction of Carloforte. On the right-hand side of the road you’ll see a turning with signs for the Spiaggia La Bobba and Le Colonne at the end of the lane you’ll come to a pink building where you’ll need to leave your bike and either go left down a pathway to the beach, or right following a path along the shore to Le Colonne (the columns). The beach is in a small cove with shallow water — it is likely to be very popular in Summer. Le Colonne are a monumento natural and a symbol of Carloforte. Unfortunately one of the two columns has been demol­ished by the sea leaving a stump.

Another short video from carloforteturismo.it, this time of Le Colonne:

Coming back into Carloforte, if you want the chance of a better view of the flamingos you can turn left by the cemetery then follow the dirt road for about 300 metres.

Further on, look out for the faded picture of Le Colonne as they used to be.

Just before you come into Carloforte you pass the turning for the Torre di San Vittorio. A former defensive tower that was converted into an astro­nomical obser­vatory and is now an excellent Multimedia Museum. It’s open on Saturdays and Sundays from 9:00 to 13:00 and from 16:00 to 19:00 and during the week by reservation.

If you have time, you could also spend a day exploring the the neigh­bouring island of Sant’Antiocu. 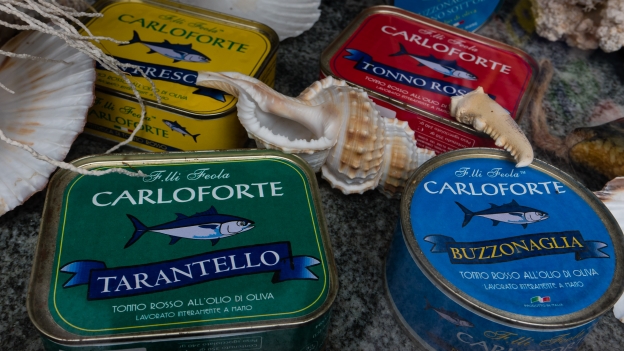 Carloforte: tuna products on display in the Fratelli Feola pescheria

Carloforte is the best bet for finding a hotel or B&B, although there is some accom­mod­ation available outside the town.

I stayed at, and would recommend the Hotel California which was friendly and excellent value.

Carloforte is likely to be very busy around the time of the Girotonno in June.

Just off the route, near the Capo Sandalo there’s the Hostel House Carloforte. It doesn’t have dorm rooms so strictly speaking it’s a B&B rather than a hostel, but it looks like a nice place to stay and it’s an AlbergaBici so they posit­ively welcome cyclists.

There’s no hostel on the Isola di San Pietro, but there is one in Calasetta on the nearby Isola di Sant’Antiocu: the newly-opened MuMa Hostel in Sant’Antioco on the Lungomare Cristoforo. The hostel is on the same site (and run by the same friendly people) as the Museo del Mare (hence the name). It has a mix of double, triple and quadruple rooms.

There’s no campsite on the Isola di San Pietro. There’s a campsite marked on the Open Street Map maps but it is derelict and looked like it had been closed for a very long time.

There are two campsites on the Isola di San Pietro. However one of them gets truly terrible reviews. The Camping Tonnara on the western coast of the neigh­bouring Isola di Sant’Antioco looks like it might be a good option.

I didn’t come across anywhere to eat or drink outside Carloforte.

In Carloforte I would defin­itely recommend the Osteria della Tonnara (Ristorante da Andrea). The antipasto dello chef gives you a variety of small sampler dishes, and is a meal in its own right.

I also enjoyed Ristorante A Galaia on the Via Nicolò Segni. 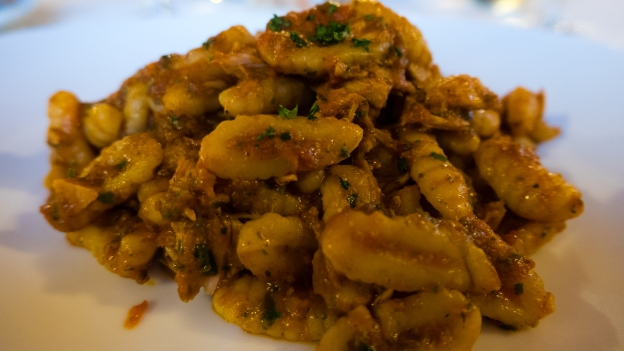 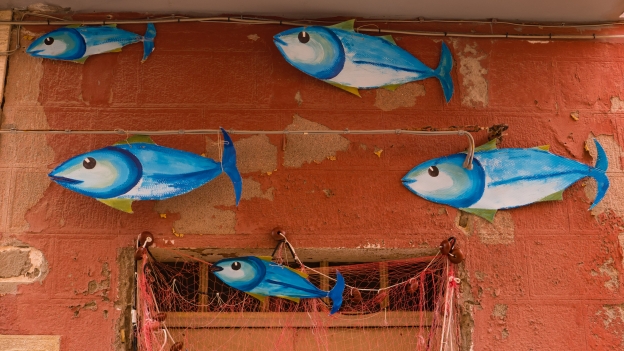