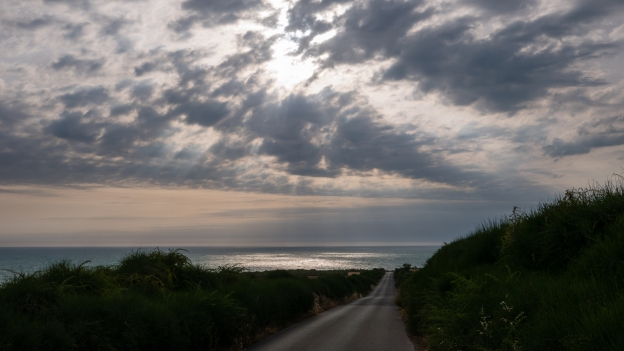 Evening on the SIBIT cycle route near Scoglitti

This section has the biggest climb of the whole route - from sea-level to over 700 metres. The climb isn’t at all steep though.

The route mainly follows quiet roads and avoids the busy SS115 where possible - however there are three sections on the main road that are unavoidable.

Almost entirely on surfaced roads - although there is a short section of unsur­faced track and road. There are also a couple of sections where the road surface is in very bad condition - it’s rideable but you need to take care

Well signposted but note that there’s an important junction that didn’t seem to be signposted.

The route sets off from Leone along the cycleway on the lungomare where there are lots of restaurants and cafes. I regretted not stopping for a coffee, as these were the only bars I saw on this whole section of the route until I got to Licata.

The cycleway eventually gives way to a shared-use pavement ciclope­donale, although the road is pretty quiet. After a bit under 4 kilometres the road turns inland at Cannatello and starts to climb. At the top of the climb there’s a round­about - turn right (sign for Zingarello) there’s a SIBIT sign a little further on as well as a ciclo­turisti sulla carreg­giata (cycle-tourists on the road) sign. This road (SP71) continues to Zingarello crossing the river Nero.

After skirting round Zingarello you come to a SIBIT sign for Punta Bianca. This is, in fact, a variant that goes off the main route. There’s a sign saying this is a percorso natur­istico difficile sterrato (sterrato indicates an unsur­faced road or track) . The words percorso natur­istico always make me nervous as it tends to mean a track that’s barely rideable unloaded, never mind with panniers. Combined with the dreaded phrase bici a mano (meaning get off and walk) this was enough to put me off, even without the piles of rubbish at the junction. As it happens, the road further on seemed to be OK from what I could see of it at a distance.

Eventually the SP71 comes out onto the SS115. You need to turn left onto the main road and follow it for about a kilometre before turning right. Be extremely careful on this section - look out for cars overtaking on the other side of the road. This is a straight stretch of road and impatience seems to lead many car drivers stuck behind a lorry or campervan to take seemingly insane risks to overtake. On this stretch of road, I had two cars overtake appar­ently either oblivious to the fact that I was riding on the other side of the road - or not caring. What makes it worse is that the people who pull this sort of stunt never indicate that they are about to pull out. 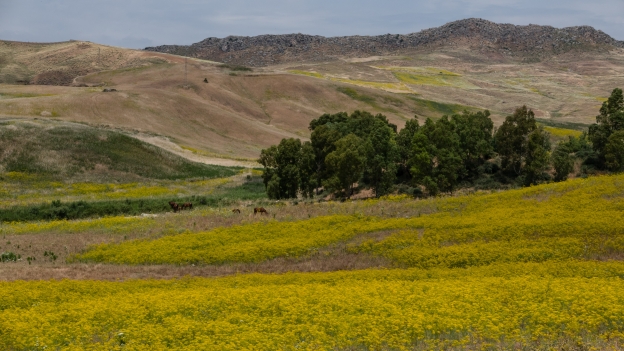 The road you turn onto (the SP64) looks like the old road that the SS115 has replaced. It has the feel of a road that has been abandoned and there’s a SIBIT sign warning about the state of the road (strada dissestata) and again there are the dreaded words ‘bici a mano’. In this case, I think the warnings were a bit over-done as, although the road is in pretty bad shape, it is rideable with care. It is so quiet that you can make use of the full width of the road to choose the best surface.

If this puts you off, bear in mind that the altern­ative involves not only lunatic drivers but a couple of tunnels - both about 400 metres long. I don’t know whether the lunatics overtake in the tunnels as well but I wasn’t about to find out.

The traffic on the new road zips along on viaducts and in tunnels while the old road meanders. It is a stretch of peaceful scenic road - although you’re never that far from the noise of the SS115. The road passes a farmhouse and a solar farm, but otherwise, it’s completely deserted. On the heights, there are wind turbines.

After a little under 7 kilometres the SP64 comes out onto the SS115 - but from here it’s a downhill cruise.

In theory, the SIBIT route turns off the SS115 as it descends towards Palma di Montechiaro. If you miss the turning (as I did) you can head for the town and pick up the route again there. Coming out of Palma di Montechiaro it follows the SS410, and then an old road - probably a previous version of the SS115, which runs almost alongside the newer road for about 7 kilometres as it heads for Mollarella.

Mollarella was the westernmost of the beaches used by the Allied Forces in the landing on Sicilia in 1943. There’s a big resort-type hotel there and a nice beach, but nothing else seemed to be open. There’s also a pretty nasty steep hill out (76 metres elevation gain in 694 metres (a little under 11 percent) - but fortu­nately it is soon over.

I wondered why the route designers had opted for this road rather simply continuing on the strada provin­ciale SP67 into Licata. The answer is that the road comes out onto a section of corniche road that really is the highlight of the day as it takes you into Licata with views over the harbour and Licata’s dramatic cemetery built looking out over the sea. The final section down into Licata felt pretty steep. 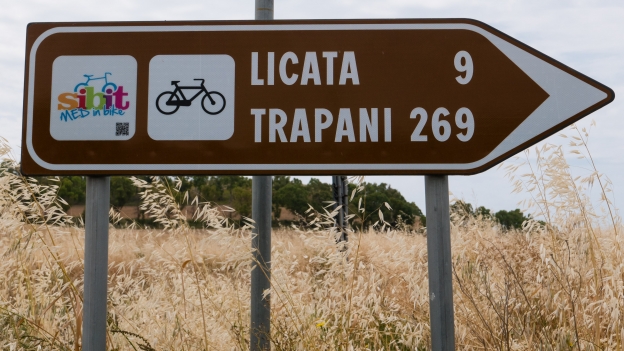 I was in two minds about this section of the route because the official SIBIT route involves a detour to the north of Gela adding 18 kilometres (and some climbing) to what promised to be a long day. I wasn’t sure whether the detour was simply there for the sake of avoiding the SS115. In the end after a few kilometres on the SS115 going out of Licata (which I have to say weren’t as bad as I thought they would be) I opted to keep the faith - the people who put together the SIBIT route seemed to have made good decisions up to that point.

Was it worth the extra 18 kms? Emphatically yes. If anything this is one of the highlights of the whole route. 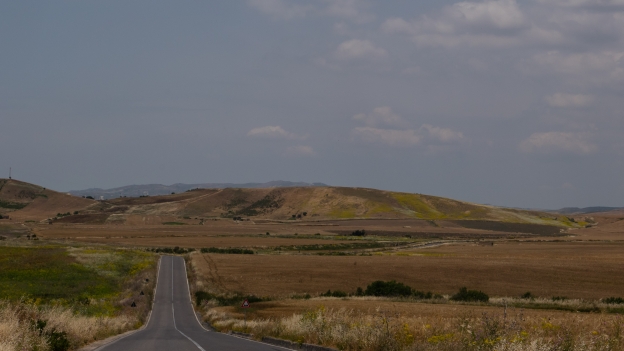 Inland Sicilia: the SP83 near Gela

This section is also very well signposted, although there are a couple of important junctions where I didn’t see any signs.

I was surprised by the number of trucks using this road - but almost no cars. The reason seemed to be that lorries heading for Agrigento are diverted off the SS115 to relieve congestion in Gela. Before you start to panic, the number of lorries isn’t huge, and generally, the drivers behave courteously - this meant that this road was much easier to deal with than the SS115 where the problem is not so much the lorries, but car drivers taking risks as they try to overtake.

Note that there is a junction with another SIBIT route that takes you inland to Caltanisseta.

Coming out of Licata there’s no avoiding the SS115 for nearly 9 kilometres to Falconara. There’s a bar, as well as a hotel and even a campsite, and if you want you can go to see the Castello Falconara.

Just after Falconara, look out for the signs to Resia. Make a left turn, and cross over the railway line. The road starts to climb - this first bit isn’t terribly inter­esting, but as you head inland the polytunnels give way to wheat fields and open skies. If maybe, like me, you’d started to feel a little bit jaded, and bored with the coast, this will defin­itely perk you up.

Near the Lago Comunelli you pick up the SP196 and then the SP 83 carrying straight on at the round­abouts along the way. Look out for the chimneys and towers of the Gela refinery, and the pillboxes (concrete gun emplace­ments) at various points along the route. The road gets busier after the junction with the road to Butera (SP8).

Look out for the ruined castle on the crest on your right-hand sign. This is quickly followed by a pillbox on a small hill and a white pyramid memorial with an Italian flag. Unfortunately, there are no signs here that I could see. You need to turn onto the SS117Bis heading north-east (ie away fro Gela) – going around the round­about and then passing the pillbox and memorial on your left.

You then continue for about 750 metres until you get to a junction with a water trough - which sadly seems to have been turned into a rubbish dump. Turn right. You then cross a ford over the Gela river - there’s a dam (‘diga’) so there won’t be any sign of any water. After you’ve crossed over you turn left along an unsur­faced track that runs beside the river for a couple of kilometres before coming out onto a narrow tarmac road. Don’t worry - this is all well signposted. The road isn’t in partic­u­larly good condition, with some rough patches. Continue on this road until you get to a cross­roads where you turn right. Ironically this road (the SP82) has big yellow warning signs that the strada is dissestata - although it’s better than the road that brought you to here.

It looks to me as though you could avoid the section of sterrata - by staying on the main road to the next junction and then turning right onto the SP10 {check with Google Streetview} then the next right onto the SP82 to pick up the SIBIT route at the crossroads.

You continue on the SP82 towards the Gela refinery, where you join the SS115. Again this is for only 3 kilometres. Look out for the signs for Scoglitti and make a right turn at the Spina Santa bar. From here the route skirts the Lago Biviere di Gela nature reserve. Just keep following the signs as the SP51 changes into the SP31. 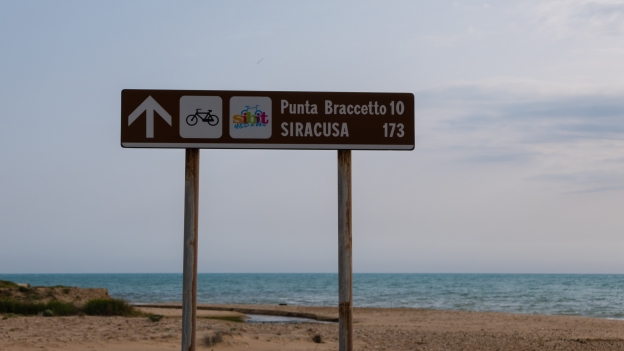 We are now returning to polytunnel land in a big way - look out for the lorries carrying tomatoes, auber­gines (eggplants), melons, peppers. The results look gorgeous but the places where they grow aren’t much to look at. Finally, the road brings you into Scoglitti.

I’m not sure why, but for some reason, the route turns away from the coast at Scoglitti to join the SP85 but then almost immedi­ately you turn right off the main road (be careful not to overshoot the turning) to return to the coast. There’s a short section along the coast before you rejoin the SP85. I’m sure there must be a reason why the route doesn’t follow the coast road out of Scoglitti.

The next stop is Punta Braccetto - turn right onto the strada comunale that takes you into the village.

Accommodation options on this part of the route are a bit limited in comparison to other sections. There are a few places to stay in Gela, but otherwise, the next town after Licata is Scoglitti.

There are no campsites until you get to Punta Bracceto.