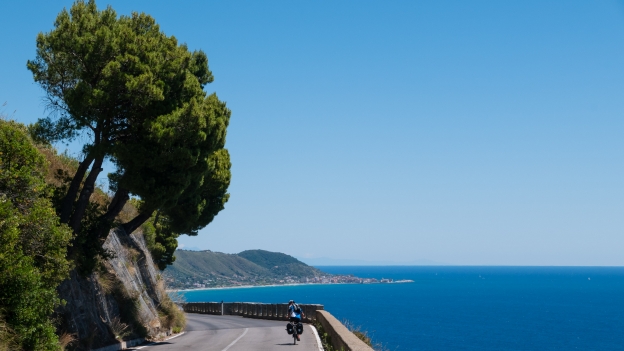 Cyclist on the Costiera Cilentana (Campania) near San Nicola a Mare

This section of the route takes you from Salerno to the Cilento coast. It’s not as well known as the Amalfi coast but for me was every bit as scenic and enjoyable. On the way are the remains of the Greek temples at Paestum — one of Italy’s most impressive arche­olo­gical sites — and the village of Castellabate with its belvedere offering a superb view over the Golfo di Salerno and the Amalfi coast.

Easy(-ish). There’s a climb from Agropoli to Castellabate of about 250 metres altitude gain, and then a couple of smaller climbs further on.

The road out of Salerno (the SP175) could get busy on summer weekends - although there is a cycleway for much of the way. The roads around Agropoli and Castellabate are also likely to be busier during the main tourist season.

Tarmac roads in good condition. The cycleway beside the SP175 is partly asphalt-surfaced and partly hard-packed aggregate. 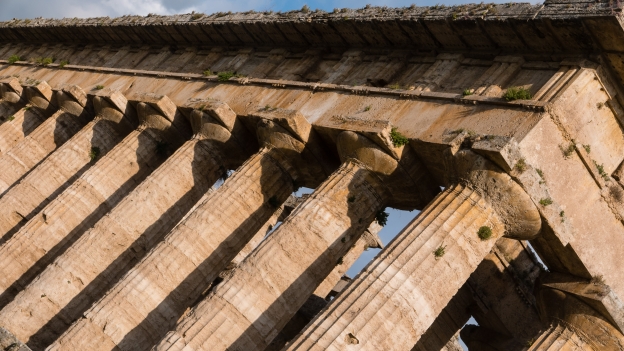 The road from Salerno (the SP175) is pretty straight­forward: although it takes a while to get clear of the urban sprawl of Salerno itself. Eventually, there is a short stretch of undeveloped coastline then a series of lidos and campsites.

There is a long stretch of coastal pineta (woodlands with the Mediterranean maritime pines). Unfortunately, the road itself is pretty dull. For most of the way there is a cycleway along the right-hand side of the road the first half is asphalt surfaced and the second half hard-packed aggregate. On the other side of the pineta, there are some stretches of free, undeveloped, sandy beach. The beaches here are a little in the shadow of the beaches further south, which are among Italy’s very best, however the beaches at Capaccio were awarded 3 Vele by the envir­on­ment­alist organ­isation Legambiente and the Touring Club Italiano

The highlight of this section is the arche­olo­gical site at Paestum. But before you get there, just after you turn off the SP175, is the Museo Narrante del Santuario di Hera Argiva.

The Sanctuary was originally on the coast at the mouth of the river Sele. It was excavated in the 1930s. The star discovery at the site were 38 metopes square blocks with sculpted to illus­trate depict episodes from the Twelve Labours of Heracles, the Trojan War, the life of Jason and Orestes. Most of the originals were moved to the museum at Paestum which was built specifically to house them. for more background on the site see wikipedia.org: Heraion at the mouth of the Sele.

As well as room dedicated to the metopes the museum has a staircase, along which are hung repro­duc­tions of clay statues dedicated to the goddess, which leads the visitor, accom­panied by the voices and sounds of the devotees, to the upstairs room, where there is a recon­struction of a room that was probably designed for weaving tunics to offer to the goddess. 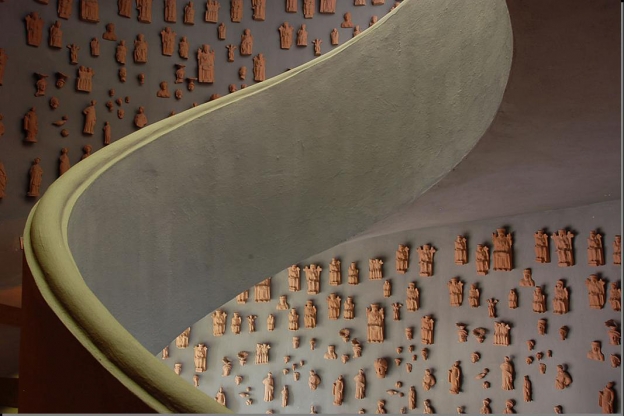 The parco arche­ologico at Paestum is the best Ancient Greek archae­olo­gical site in mainland Italy, and while there’s a lot of compet­ition, I think I’d include it in the list of the top ten sites in Italy from the ancient world.

The city was founded by Greek settlers as Poseidonia (named after Poseidon, the Greek god of the sea) the modern name came from the Romans who took over in 273 BCE after the city had backed Pyrrhus of Epirus in his ultimately unsuc­cessful war with Rome in southern Italy (hence the phrase ‘pyrrhic victory’ for a victory that turns out to be short-lived or illusory because of its high cost).

Paestum was eventually abandoned due to the spread of malaria.

You can ride around the old city walls that run for almost five kilometres, and see the remains of the 24 watchtowers. Much of the site of the old city remains unexcavated.

The star sights are the two temples dedicated to Hera and one temple dedicated to Athena. They are some of the best-preserved ancient Greek temples in the world and has been declared a World Heritage site by UNESCO (together with the Cilento national park and the Certosa di Padula).

The ticket prices are very reasonable, but if you’re a real cheapskate, or you get there late, or you don’t believe in doing ‘tourist stuff’, you can ride past and get a great view of the temples. 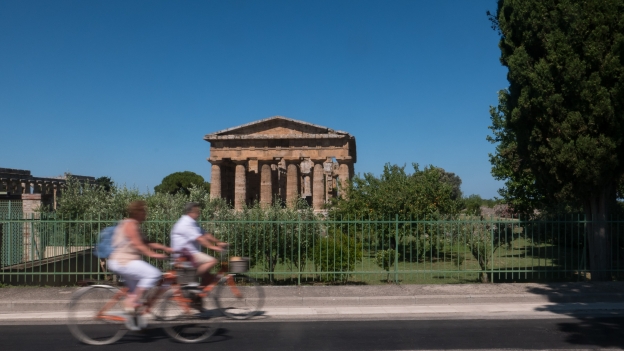 Cycling past the Paestum Archeological site

You can buy a biglietto cumulative (combined ticket) covering the arche­olo­gical site and the two museums for 8 euros. according to the official site the museo narrante is closed on Sundays and Mondays. The main museum and the parco arche­ologico are open almost every day of the year (to check opening hours and prices go to museopaestum.beniculturali.it: Hours and Admission). And if Paestum isn’t enough for you, you can get a combined ticket to visit the parco arche­ologico di Velia a little further on down the road at Ascea, with its Greek theatre high on a hill looking out to sea (for more see wikipedia.org: Velia). 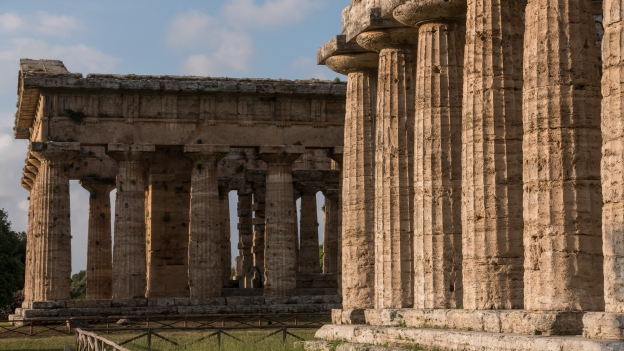 From Torre di Paestum a quiet road with some scenic bits takes you into Agropoli, a nice seaside town, with a pleasant lungomare and pedes­tri­anised centre.

You could continue on the main road to the resort of Santa Maria di Castellabate, but I’d recommend taking the strada provin­ciale to Castellabate. Castellabate (altitude 289m) is a small village with a medieval centre around a castle. Some maps refer to it as Castello d’Abate (the abbot’s castle) referring to the abbot of La Trinità della Cava who had the castle built.

The village is now best known as the location for the film Benvenuti al Sud (‘welcome to the south’ (en.wikipedia.org: Benvenuti al Sud) which was a hit in Italy in 2010. The film (an Italian adapt­ation of the French film Bienvenue chez les Ch’tis) is about a manager in the Poste Italiane who is sent south as a punishment. It’s a hilarious send up of northern Italian stereo­types of the south.

The film is centred on the little post office in the piazzetta (little piazza) in the village. Ironically the village has no post office —the ‘post office’ was created by the film-makers specifically for the film — but in the piazzetta (referred to simply as ‘La Piazzetta’ instead of ‘Piazza 10 Ottobre 1123’) there’s a nice bar and restaurant. While you’re in Castellabate be sure to visit the Belvedere di San Constable with its glorious views over the Golfo di Salerno. 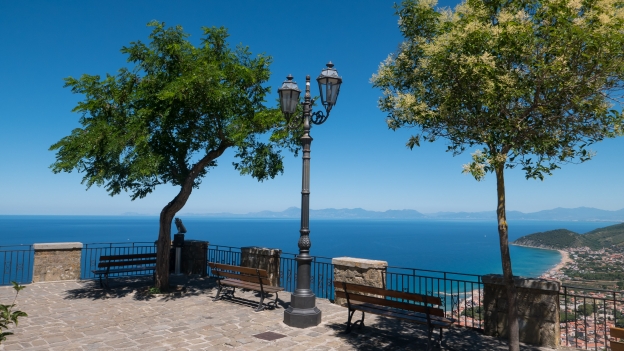 From Castellabate there’s a lovely descent down towards Santa Maria di Castellabate and from there past San Marco. As great as the descent is, the best is still to come with a stretch of gorgeous coast road. Look out for the maritime pines on the slopes below. There are a couple of short climbs take you to the Acciaroli, which with its little port, harbourside church and Torre Normanna (watchtower) is one of the nicest places on the coast. 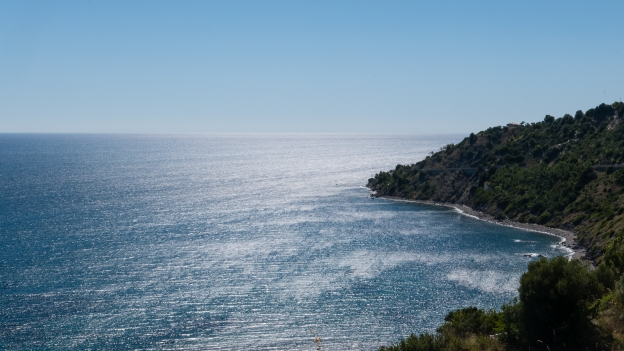 Hemingway stayed here in 1951 and spent a lot of time fishing, and, of course, drinking with the local fishermen. There are claims that his novel The Old Man and the Sea wa inspired by their stories, and by local fisherman Antonio Masarone. Sadly, it looks like Hemingway had had the main outline of the story in mind since his time in Cuba in the 1930s.

The beach between here and nearby Pioppi is one of the 15 beaches in Italy to be awarded the presti­gious 5 Vele (five sails) from the envir­on­ment­alist organ­isation Legambiente and the Touring Club Italiano — coming number 3 in the overall classification. 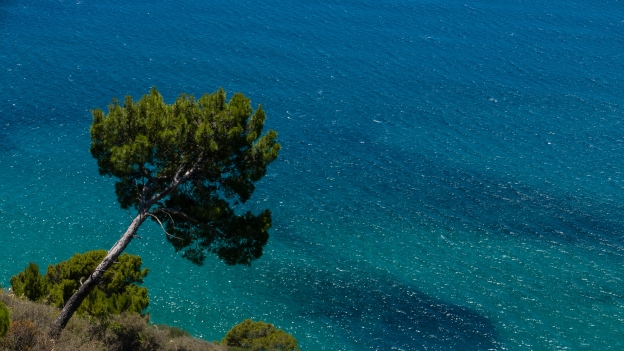 There are loads of campsites along this stretch of the coast, although some are more appealing than others. I stayed at would recommend the Camping dei Pini at Torre di Paestum. The campsite restaurant is great value. The best area for touring campers is at the far end of the site across a little bridge.