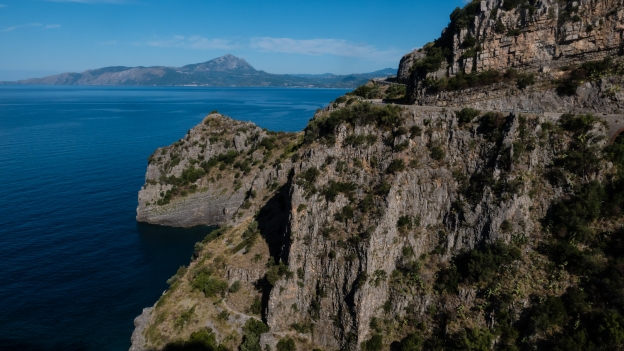 The final section is the shortest but possibly the most dramatic as you follow the road along the coast of Basilicata before reaching Praia a Mare in Calabria.

Moderately challenging. There’s quite a lot of climbing on this section, but none of the climbs are long or steep. 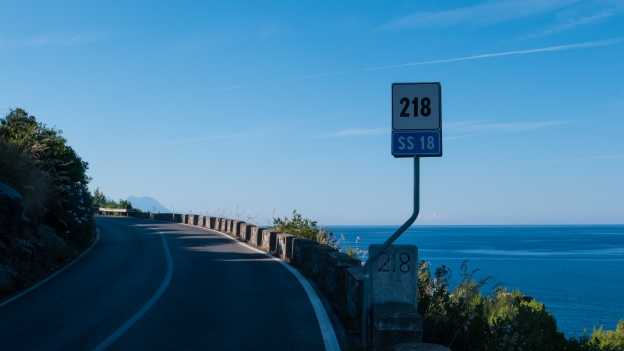 This final section is the shortest, but quite possibly the most spectacular of the whole route. The ride from Sapri to the Marina di Maratea is only about 20 kilometres but is possibly the most dramatic road on the whole of the Italian coast. Steinbeck’s memorable phrase describing the Amalfi coast road

“ a road, high, high above the blue sea, that hooked and corkscrewed on the edge of nothing… And below us, and it seemed sometimes under us, a thousand feet below lay the blue Tyrrhenian ”

Would defin­itely apply to this section of road, carved out of the rock face, with the waves breaking on the rocks far below.

The section takes you along the costiera tirrenica of the Basilicata region (Basilicata also has an Ionian coast). 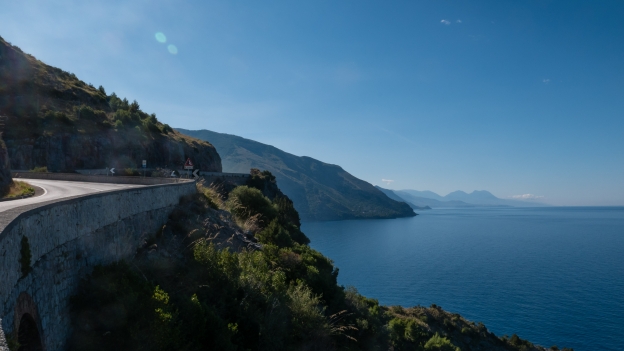 Maratea is one of southern Italy’s most stylish and fashionable seaside resorts. It is perhaps best known for the 21-metre high statue of the Cristo Redentore (Christ the Redeemer), built high on Monte San Biagio above Maratea. If you have the energy there’s a strada panor­amica which takes you to the foot of statue from where you can enjoy the views over the Calabria and Basilicata coasts.

San Biagio is buried in Sevastopol cathedral — or at least most of him is: some of his bones were sent to Rome in 732, but a storm forced the ship carrying the relics to take shelter in Maratea where the bones have remained ever since.

Matera was an important religious centre - it’s known as the Città delle 44 chiese after the 44 churches and chapels around the town and in the surrounding area. There were also three monas­teries and a convent 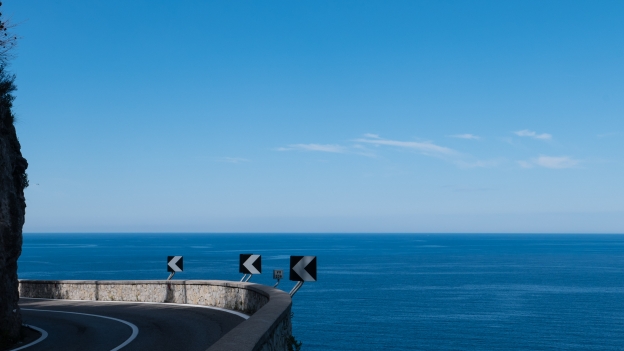 The old village, now abandoned, is on the slopes of Monte Biagio. At the sea edge is the port and modern seaside devel­opment, and in between the centro storico. I missed the turn for the centre - I should have turned off the SS18 and onto the SP3 and Via San Nicolà.

Along the road to Calabria is the Grotta delle Meraviglie (“The cave of marvels”). 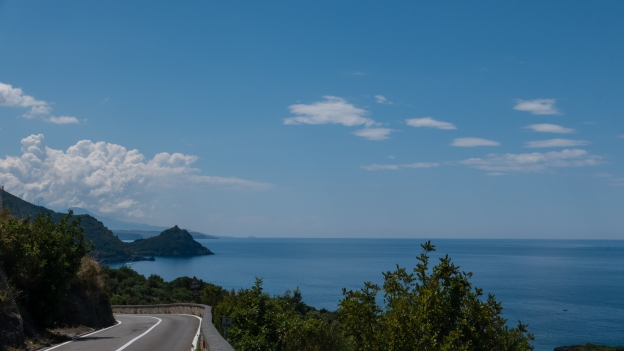 The Basilicata section ends at Castrocucco. From here you can either stay on the SS18 - or take the old road (now the SP1) as it hugs the coastline between Praia a Mare and San Nicolà Arcella.

Praia a Mare is one of Calabria’s leading seaside resorts. It’s a pleasant place for an overnight stop or for a meal. Look out for the Torre dei Fiuzzi - one of the grandest defensive towers along the coast which looks out over the Isola di Dino, and the Norman Rocca di Pietore high above the town. 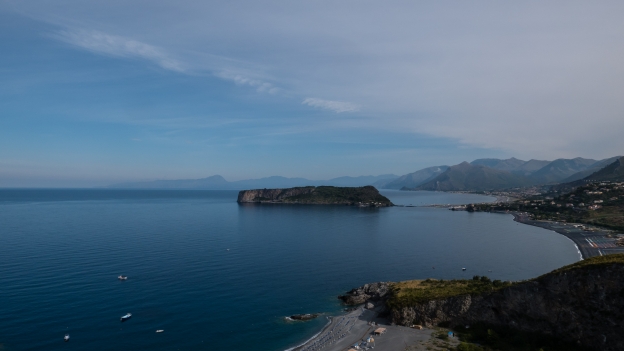 Calabria coast: on the road to San Nicolà Arcella, looking back towards Praia a Mare and the Isola di Dino

This is another road that clings to the cliff-side as if follows the coast. In contrast, high above you, the SS18 strides down the coast on huge concrete viaducts.

There has been a lot of property devel­opment around San Nicolà Arcella, but there’s an attractive centre that’s worth a stop.

From San Nicolà, again you have the choice of either taking the SS18 or the SP1 as they descend down into the town of Scalea.

There’s a station at Scalea (official name Scalea Santa Domenica Talao) with regular bike-friendly services north to Napoli and beyond. There’s nothing to stop you continuing south, however, while there are a couple of inter­esting places along the way (especially Diamanté) the coast south from Scalea really isn’t very inter­esting until you get to Pizzo.

You can continue south along the SS18 as it heads through Calabria. But if you do, be prepared for a big feeling of anti-climax. 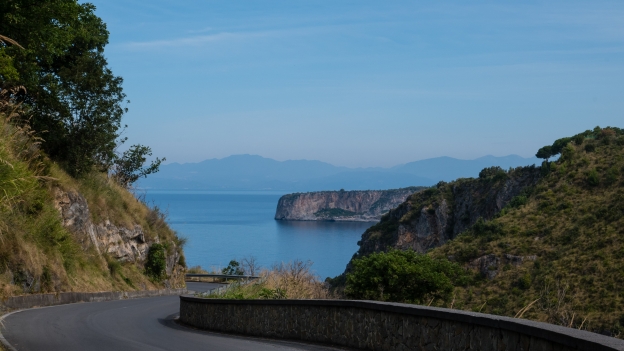 Maratea is fairly expensive and it’s best to book ahead if you want to stay there. Praia a Mare offers a broader range of choice and more reasonable prices.

There’s a campsite near Maratea the Camping Maratea at Castrocucco. Otherwise there are two campsites in Praia a Mare — the International Camping-Village and the Mantinera.

There’s a station at Scalea (official name Scalea Santa Domenica Talao) with regular bike-friendly services north to Napoli and beyond. 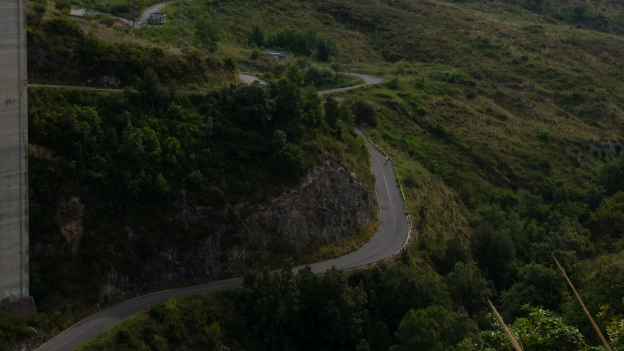 Calabria coast: cyclist on the old coast road between Praia a Mare and San Nicolà Arcello (on the left of the picture is part of the SS18 viaduct)