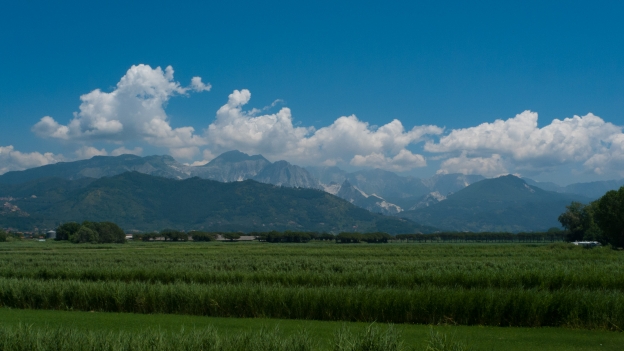 View of the Alpi Apuane from the north Tuscan coast

Jump to the Map and altitude profile or the gps downloads.

Through stylish seaside resorts on possibly the most fashionable part of the Tuscan coast. The highpoint is Viareggio with its 1930s lidos and Liberty (Art Nouveau) archi­tecture. Lots of places where you can sit and watch the world go over a coffee, a cool drink or a gelato (ice cream). And then on to lively, friendly, Pisa.

If you’re coming south from Liguria the coast of Toscana may seem like something of an anti-climax especially after the gorgeous ride along the coast of the Golfo dei Poeti. Or it may be a welcome relief to have 50 kilometres cruising on flat roads as a break from hill climbs.

The bici is a popular way to get to and from the beach, so provision for cyclists is pretty good, although cycleways can get pretty crowded - if you need to make time you may prefer to take to the road (which is nice and wide). 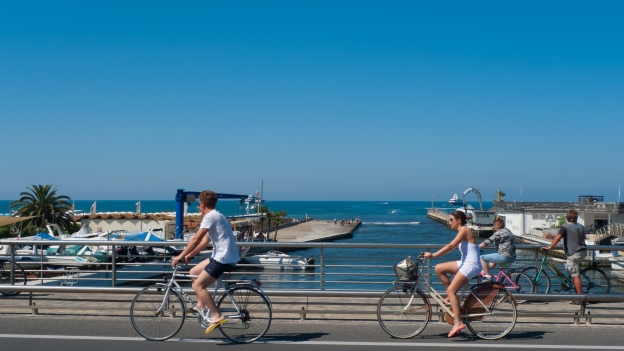 The mountains aren’t very far away, and you only need to look to the left to see the dramatic mountains of the Alpi Apuane and if you look to the mountains you can see what looks like snow but in fact it’s the dazzling white of the marble. Carrara is famous for its marble (Michelangelo used it), and the town still has the feel of a place where many people earn their living quarrying and working stone. The big chunks of marble on the lungomare make a convenient place for sunbathers.

During World War 2 the Marina di Carrara was the end of the Gothic Line the a defensive line created by the German forces to hold back the allied offensive in the winter of 1944. The line ran across the Apennines between here and the Adriatic coast. There’s a small memorial beside the road, but inland you can still see the long antitank wall and other defences that formed part of the line. Carrara and the marina were the scene of bitter fighting with devast­ating allied bombard­ments. The town and the whole surrounding area was a centre of resistance and paid a terrible price in terms of reprisals against civilians. It was awarded a gold medal in recog­nition of the role it played. 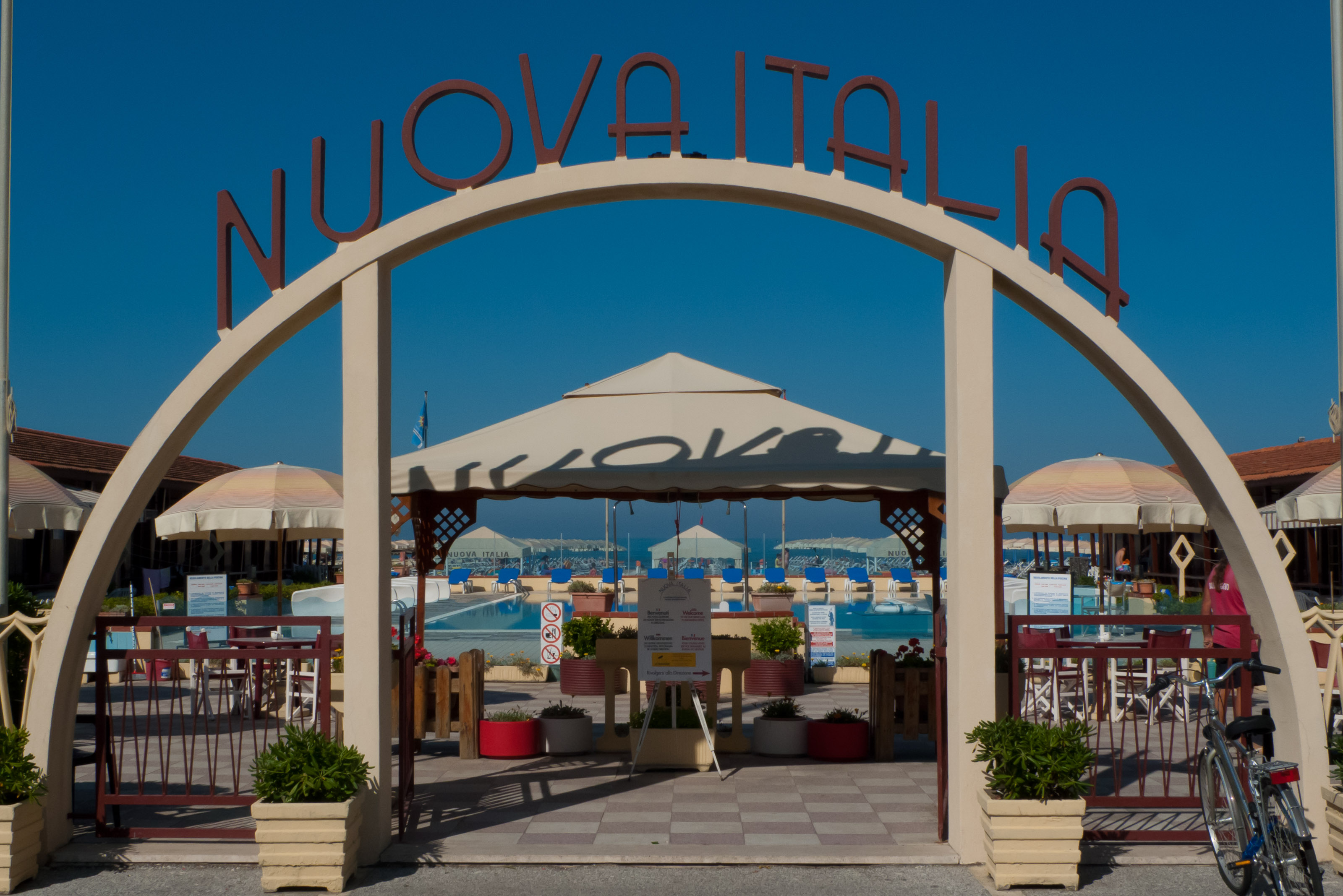 Today this area is also well known for its tourist resorts. Forte dei Marmi is making a strong bid for the celebrity and ‘vip’ (pronounced ‘veep’) market - Roman Abramovich was reported to be looking for a property and a number of glamorous celebrities and slightly-less glamorous politi­cians were photo­graphed there over the summer. Personally I preferred Viareggio, with its Art Nouveau (called Liberty in Italy) buildings and lidos. Seaside resorts don’t come much more stylish and classy.

The main Via Aurelia (SS1) and the motorway, are a little way inland which means that the coastal road is relat­ively quiet - relat­ively being the operative word, as on summer weekends and during the peak season there will be quite a lot of traffic around. There are also decent cycleways - partic­u­larly as you come into Viareggio, although these to are likely to be busy in summer as people cycle to and from the beach.

From Viareggio the route heads along a gorgeous tree-lined road into Torre Lago Puccini where the composer made his home, and then inland for Pisa, where you can cycle through the Piazza dei Miracoli (miracles) including the Torre Pendente (Leaning Tower). Look out for the Keith Haring mural as you head out of town . While you’ll probably want to make a beeline for the Piazza, Pisa itself is a lively university-town and worth exploring; most tourists seem to be on day-trips so they visit the Piazza (or even just the tower) and ignore the town itself.

The Leaning Tower has become one of the iconic symbols of Italy - along with the Colosseum, the Duomo in Firenze, and the Rialto in Venezia - and at any one time you’ll see at least a dozen people posing for pictures pretending to hold it up (who started that?). But it would be a mistake to ignore the rest: the Duomo, the Battistero and the Campo Santo which sadly was badly damaged by Allied bombs during the war.

The Piazza and surrounding area are home to a huge number of stalls selling souvenirs, not to mention tourist-trap restaurants, but it’s easy to escape into Pisa itself and enjoy the atmosphere of a lively, and friendly, university city.

The Ciclovia Francigena (until recently called the Ciclovia dei Pellegrini) cycle route heads inland via Pietrasanta and from there on to Lucca and Siena.

I have suggested an more challenging variant of this tour The Tuscan coast - taking the high road take the high road through the string of attractive historic towns in the hills along the coast. You can pick up the option here, or, if you prefer continue along the coast to Cecina and then pick it up there.

There is also an attractive road through Castellina Marittima which you could pick up by heading inland at Pisa or Livorno.

There’s one hostel in Marina di Massa and two in Pisa:

There’s a friendly site at Pisa (the Camping Torre Pendente) which couldn’t be handier for the Campo dei Miracoli, but I expect that it will be busy in peak season. There are a number of campsites on the coast within easy riding distance of Pisa.

The main Pisa-Roma rail line runs along the coast so there are train stations all along the route.

The ferry terminal at Livorno offers services to a range of destin­a­tions - see next section. 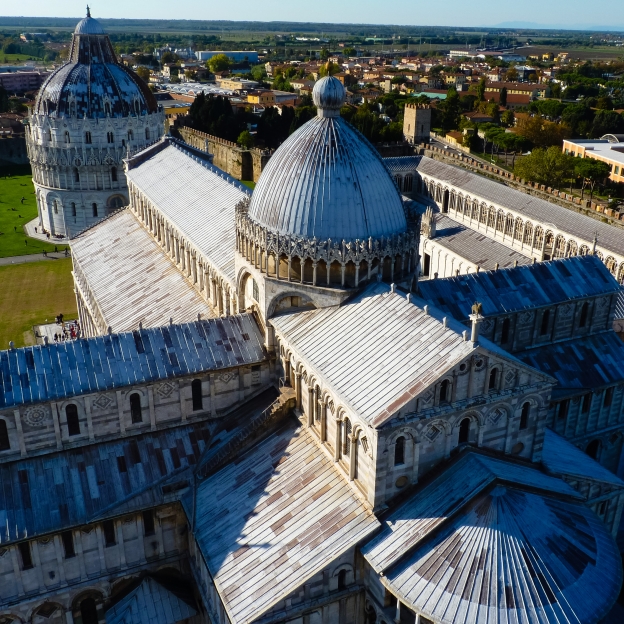 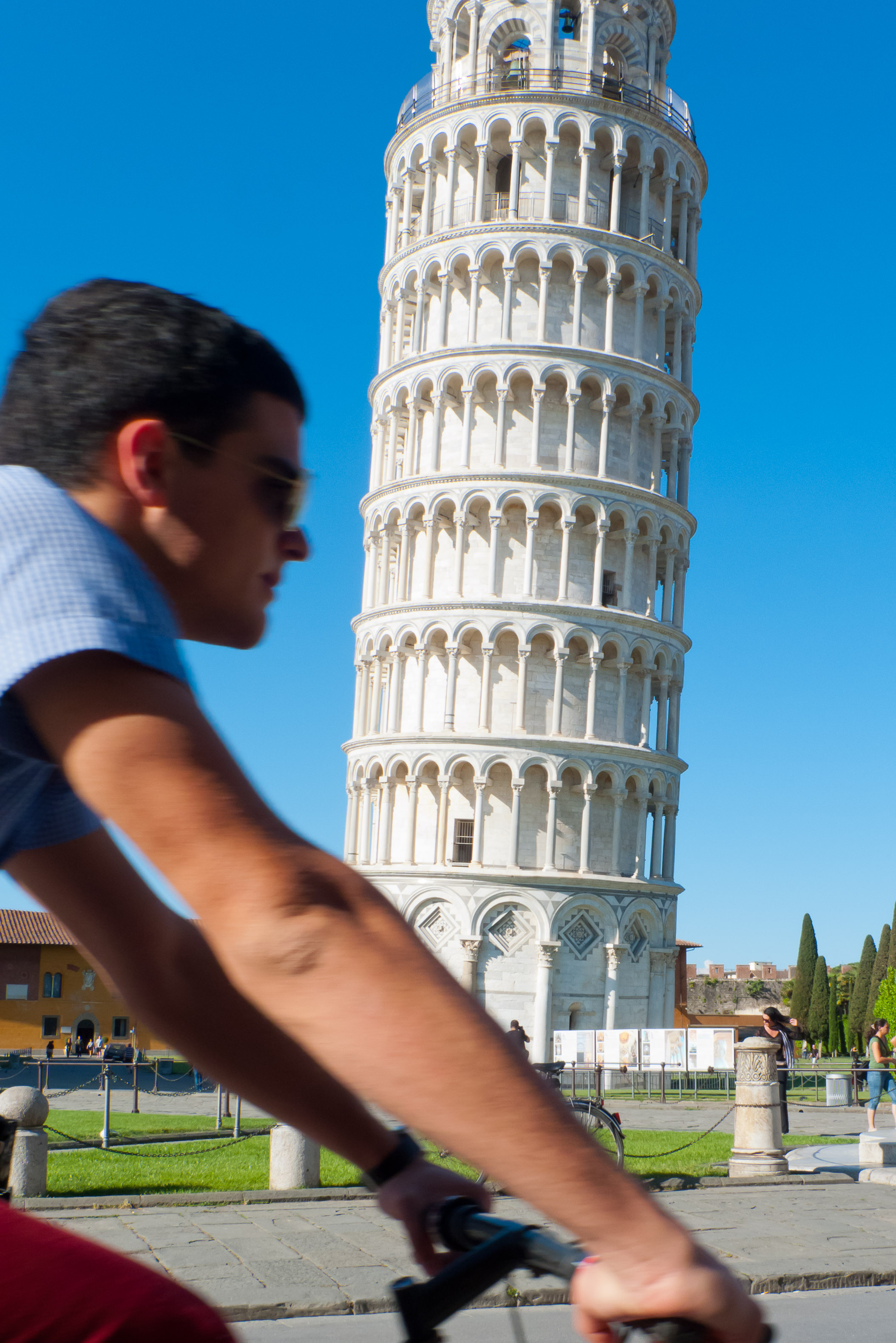