The hills along the coast of Toscana offer some enjoyable cycling on bliss­fully quiet roads, great views, vineyards and cantine (wineries), and some of Toscana’s most authentic hilltop towns. This is a more challenging option but a rewarding one. You could have the best of both worlds by following the coast from Livorno and then heading inland north of Cecina - see the Options. 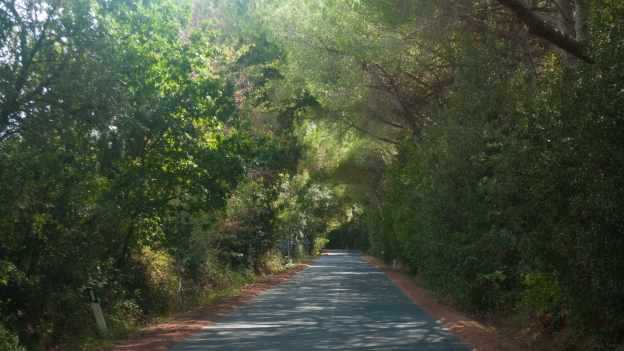 The route starts in Pisa. From Pisa there’s a straight­forward ride across the Arno plain gradually gaining height. The first main climb (and the biggest of the whole route) incomes at the 42-kilometre point as the route climbs to Castellina Marittima (375m) 4.4 kilometres further on. Castellina is a good place to stop for a coffee before continuing to the high point (408 metres) at the 53 kilometre point. From there it’s a glorious downhill cruise to Cecina on the coast.

There are a some campsites near to Cecina, but if you have the time and the energy to face another climb, there are a couple of attractive options near Guardistallo.

The climb to Guardistallo involves a 266-metre altitude gain over 7.9 kilometres. At the top of the climb it’s worth making a short descent down the road to Volterra (and the Agricamping La Corsa) just to admire the dramatic views of inland Toscana. From here there’s a descent down to Bibbona (80m). If you have time you could stop to visit its medieval centro storico. 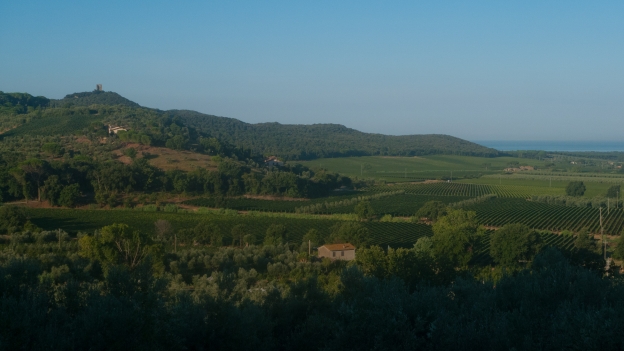 The Maremma near Castagneto Carducci

The next stop, 7 kilometres further on, is the town of Bolgheri. We are now entering the Bolgheri wine country of huge vineyards. This is one of Italy’s most up-and-coming wine areas and home to the Sassicaia ‘Super-Tuscan’ produced at the Tenuta San Guido.

Sassicaia is out of my price range, but a glass of Bolgheri Rosso, or Bolgheri Bianco should be within most people’s budgets. Bolgheri is a great place to enjoy a glass of wine, or a meal, or a gelato (ice cream). There’s also a fontanella so you can fill your water bottles.

And as you turn into the approach road to Bolgheri you can admire its other claim to fame - a 5-kilometre long avenue of cypress trees ( opens in overlay) that runs between the town and the coast (OK, almost to the coast).

From Bolgheri there’s a smashing 10 kms or so on surpris­ingly quiet roads towards Castagneto Carducci. At about the 98 kilometre-point the road starts to climb again, with a 316-metre climb over 15.2 kilometres. climbing towards Fornaci, Sassetta and the high point near Santa Caterina. 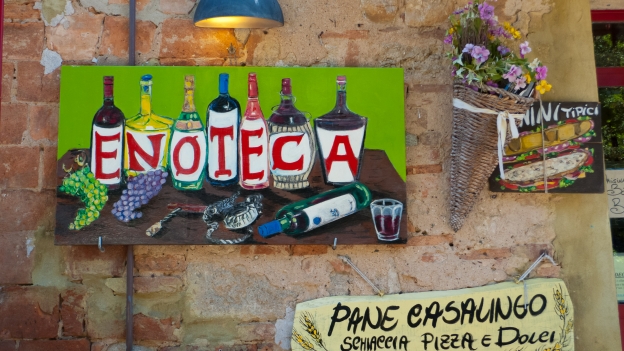 Sassetta is well worth a stop. It’s an attractive village (especially the fortified borgo at its heart) but its claim to fame is the annual sculpture symposium (Simposio Scultura) organized by the comune where four young sculptors are invited the the village and over ten days in early July they work in the open air to produce a sculpture from a chunk of the local red marble. The public get to watch, and to vote for the winner of the Premio della Giuria Popolare(People’s Choice Award). The sculp­tures are then displayed around the village in the Percorso dell’Arte. There are videos about the 2012 and 2013 simposio on youtube. Here’s the 2012 video:

You can also download a copy of the brochure (in English and Italian) from the comune’s website. The brochure includes photo­graphs of the winning entries and their sculptors.

After Sassetta there’s a bit more climbing up to 353 metres at the 113 kilometre point and then a gorgeous cruisey descent to the town of Suvereto. another place that’s well worth a stop: it was awarded an orange flag quality mark by the Touring Club Italiano as one of the best small towns in Italy (see bandierearancioni.it: Suvereto). 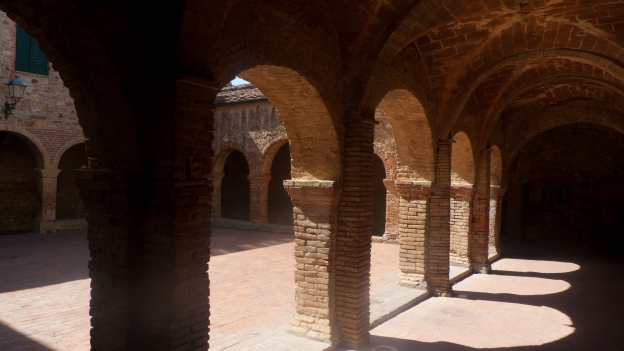 Suvereto: cloister of the ex-convento

Climb up to the Rocca Aldobrandesco (rocca is one of the many Italian words for a castle or fortress). The Aldobrandeschi were a family descended from the Longobard invaders (the name is an italian­isation of Hildebrand), who ruled the Maremma during the medieval era. There are over 30 of their fortresses in southern Toscana and northern Lazio. Check out the palazzo comunale as well as the cloister of the Convento di San Francesco. There are some decent bars and restaurants as well as a good bar-gelateria.

Next stop is Campiglia Marittima, another atmospheric hilltop town. Great ride up. Don’t make the mistake that I made of missing the Rocca di Campiglia the walled fortress built by the Pisan Counts della Gherardesco. Great views out from the top (281m). The walled Rocca was built to house the metal­workers and miners who worked for the Count at the nearby San Silvestro mines where copper, silver and lead were mined. The mines started to go into decline and the village was completely abandoned in the fourteenth century. Mining resumed again in the late 19th century under a British company Etruscan Copper Estate Mines. The company’s offices have been restored and are now home to the Gowett Hostel (named after the company’s president). If you’re inter­ested, there’s a lot to see in the park including a couple of under­ground visits.

Marble from the quarries of Campiglia Marittima was used in the building of the Cattedrale di Santa Maria del Fiore in Firenze.

After Campiglia Marittima you have the choice of heading for the coast, or continuing on to Massa Marittima where you can pick up the Gran Tour della Maremma. Massa Marittima is another evocative medieval town high on a hill looking out towards Elba and Corsica.

At the heart of Toscana’s colline metal­li­ferre (metal-bearing hills), it grew rich on mining. Like Campiglia, Massa was caught up in the long power struggle between Siena and Firenze which ultimately ended with Siena’s defeat. It came under the domin­ation of the Sienese who built a fortress and a new city at the top of the hill above the centre of Massa. The Torre del Candeliere (it/en/de), linked to the Cassero Seneseby a dramatic single-span bridge, is a must see. The views from the city walls are some of the best in the whole of Toscana: on a clear day you can see Elba in the distance.

There’s lots more to see in Massa, including another mining museum, and the Museo d’Arte Sacra Museum whose most famous picture is the Maestà by Ambrogio Lorenzetti. 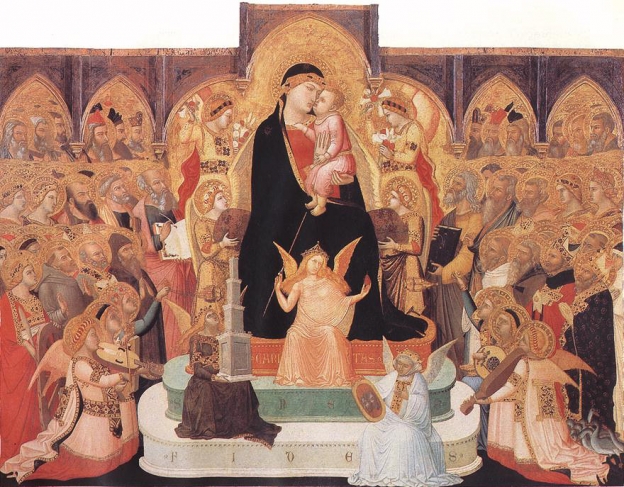 Maestà di Massa Marittima by Ambrogio Lorenzetti from the Web Gallery of Art: via Wikimedia Commons

I’d defin­itely recommend the Fondazione Museo Santa Cecilia (Museo degli Organi). The Fondazione is creation of Dr Lorenzo Ronzoni who has assembled an extraordinary collection of organs and pianos as well as restoring the church that houses the museum. He’s defin­itely an enthu­siast and was only to happy to take me on an accom­panied visit and to play some of the organs for me - as well as a demon­stration of the difference between Mozart played on the type of piano Mozart used as opposed to a modern grand concert piano.

You could, of course, ride this route from south to north or combine it with other routes in Toscana. At Pisa you could opt to continue along the coast going via Viareggio or head through the Garfagnana and Lunigiana.

From Campiglia Marittima you are within easy reach of the Etruscan site at Baratti - or Piombino the ferry terminal for Elba. At Massa Marittima you can pick up the Gran Tour della Maremma. You could also continue along the coast following the Bicitalia 16 - Ciclovia Tirrenica route.

Booking.com pages for places on this option:

There are hostels in Pisa and at both Campiglia Marittima (the Student’s Hostel Gowett)and Massa Marittima (The Sant’Anna/Le Clarisse).

So far as I know, the only campsite on the northern part of the route is in Pisa, but there are a number on the southern part. The campsites I know about are:

The main Pisa-Roma line runs along the coast.

For inform­ation about museums

For inform­ation about wine: 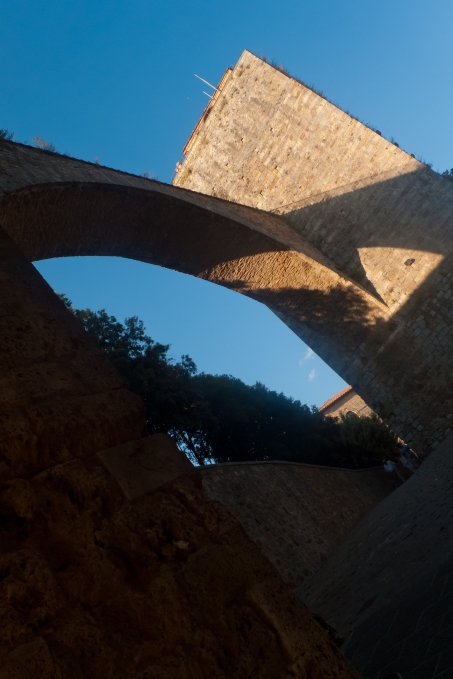