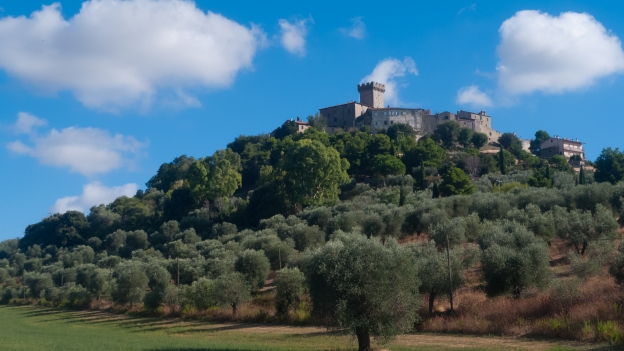 This part of the tour follows the cycleway to the town of Grosseto and then heads inland on quiet country roads to the beautiful walled hill towns of Magliano in Toscana and Capalbio. Don’t miss the views out to sea from the city walls.

There’s a definite change of scenery and pace as the route heads away from the coast via and into the Maremma. The ride continues, following the Cicloturismo Maremma route via Magliano in Toscana, Marsiliana and Capalbio. The countryside isn’t dramatic but has lots of charm - especially in spring with the wildflowers in the fields.

The highlights of this section of the tour are the hill-top towns of Magliano in Toscana and Capalbio. The view from the top of Magliano’s city walls is one of the best in Toscana, but Capalbio goes one better, with not one, but two sets of walls.

All good things come to an end, and the cycleway from Castiglione della Pescaia (and pineta) come to an end at the Marina di Grosseto. However, from here you pick up another ciclabile (cycleway) all the way into Grosseto. This cycleway looks like it used to be a road but has now been given over to cyclists and pedes­trians. As you cycle please give a quick applauso to the local author­ities who have planted hundreds of trees along the cycleway. Most of the trees are relat­ively young but it looks like in a few years time this will be a beautiful arcade of trees taking you in peace, quiet and shade into Grosseto.

The route swings inland at Grosseto. The major reason is the Monti del Uccellina nature reserve. The reserve has a network of footpaths and there’s also the Cala del Forno - which also figured in the list of Italy’s top beaches in the Legambiente poll.

From Grosseto I took the road out to Istia di Ombrone. There’s a nice scenic road from Istia, but it turns out that I could have got the main road. The road joins the Via Aurelia super­strada about 4.5 kms out of Grosseto - look for the Cicloturismo Maremma sign for Montiano which takes you through a short underpass and then, on quiet lanes and minor roads to Montiano and Magliano, in Toscana.

The Maremma occupies about a quarter of Toscana (and a chunk of northern Lazio). It’s an area that defin­itely has its own distinctive character and history. There’s a lot to see and enjoy here. The Strada del Vino e dei Sapori Colle Maremma has commis­sioned an excellent promo­tional video, the commentary is in Italian, but even if you don’t speak Italian, the photo­graphy is gorgeous. (A big white space means the vimeo servers are down).

The scenery here is rolling hills and mostly gentle climbs - with sheep and cows in the fields (an unusual sight in Italy) I almost felt that I was back in England - with only the olive trees and occasional vineyard to remind me that this is Italy.

You could bypass Magliano, but it really is worth the detour. There are a number of bars and restaurants as we />ll as the view from the city walls (look for the signs for le mural. 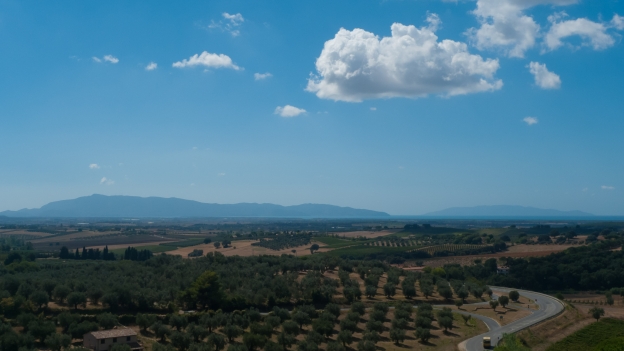 Magliano in Toscana - view from the city walls

At Magliano you could follow the Cicloturismo Maremma signs for the Scansano (centre of one of Toscana’s main wine-growing areas) and from there head for Capalbio via Manciano. I took the easier option of the road via Marsiliana, passing the ruins of the church of San Bruzio, and on from there along a relat­ively flat and easy road to the Capalbio where there’s a short and pretty straight­forward climb to the lower part of the town. The streets of the centro storico of Capalbio, on the other hand, are steep and narrow so you’ll probably want to leave your bike in one of the car parks and head into the centre of town on foot.

Capalbio is quite fashionable and has its fair share of restaurants and galleries, as well as a couple of bars with panoramic views. There are two sets of walls, both are defin­itely worth the climb, but the view from the crenel­lated upper walls is memorable.

If you have the time and the energy you might also want to visit the Giardino dei Tarocchi (IT). Tarot Garden. A garden with 22 huge sculp­tures covered with brightly coloured ceramics (the garden was inspired by Gaudi’s Parc Guell in Barcelona). Check out the gallery for a flavour of what to expect. Entry is 12€ and the gardens are open from 14:30 to 19.30.

The route returns to the coast and the border with Lazio. It makes a short detour in order to cross the railway line and pick up a very quiet minor that goes past the WWF’s Lago di Burano (IT) nature reserve. The Lake Burano was the first of the 100 WWF nature reserves in Italy. It protects 12 kilometre of unspoilt beach and coastal dunes. 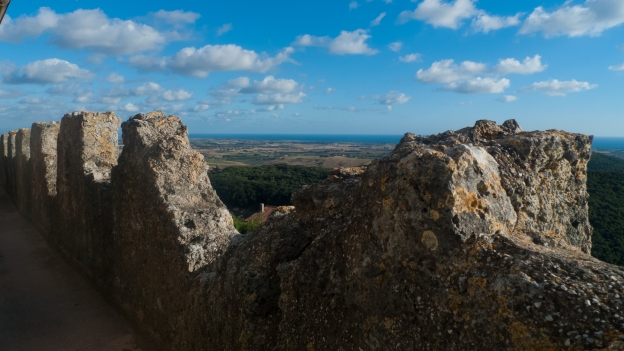 Capalbio view from the city walls

From Capalbio you can continue along the coast of Lazio. You are about a day’s ride from Rome - or two and a bit if you take time to visit the Etruscan sites of Tarquinia and Cerveteri. Alternatively, you could head inland to San Quirico and Pitigliano and from there head for Rome via the Lago di Bolsena, Lago di Vico and Lago di Bracciano. Bear in mind that all of these lakes are in the bowls of extinct volcanoes so expect to do some climbing.

This section of the tour follows the route of the Gran Tour della Maremma - so you could follow that as it heads inland to the towns of Pitigliano and Scansano. You won’t regret it.

Another option would be a side-trip to the Laguna di Orbetello and the Monte Argentario. The Monte Argentario is a mountain that suddenly juts out of the sea and is connected to the mainland by three narrow causeways. This was once a Spanish enclave on the Italian coast and still retains the watchtowers they built as lookout points to guard the coast — see visittuscany.com: Monte Argentario towers and fortresses for more inform­ation. There’s also an article Discovering Monte Argentario on two wheels. Note that if you want to go round the whole promontory there is a 3.5-kilometre stretch of ‘very rough’ dirt road. 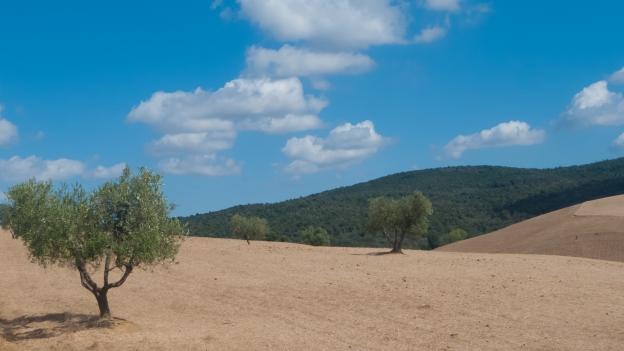 There are several campsites along this section of the route, including:

The main line between Pisa and Rome runs along the coast. Note that although there is still a station at Chiarone Scalo, no trains stop there. For trains north to Pisa or south to Civitavecchia and Rome you need to go to Stazione di Capalbio.

The ferry terminal at Civitavecchia, a little way further down the coast, offers ferry services to Barcelona, Palermo and Tunis - as well as Sardinia.

The end of this section of the route is about a day’s ride from Rome’s Fiumicino airport —see Cycling the Lazio coast on this site.

The main tourism website for the area is turismoinmaremma.it. The website of the Strada del Vino e dei Sapori Colli di Maremma has a useful map showing hotels restaurants as well as vineyards and enoteche (wine bars). The website of the Pro Loco Monte Argentario has general tourist information.

visittuscany.com: Argentario’s museums by the sea about museums and attrac­tions in the area.