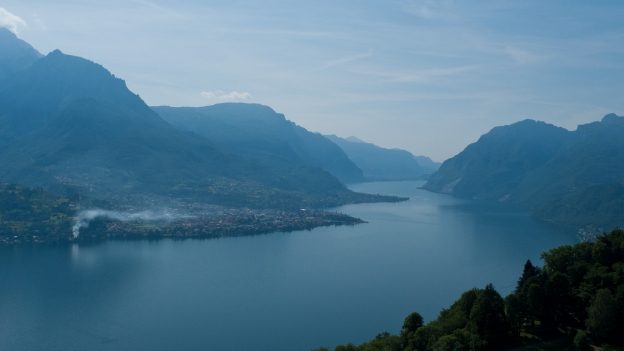 Lago di Como from the road to the Madonna di Ghisallo, near Bellagio (Lombardia)

This route makes the 500-metre (altitude)climb from Bellagio on the Lago di Como to the chapel dedicated to Madonna del Ghisallo - patron saint of cycling. This is a famous climb that forms part of the Giro di Lombardia (average gradient is 9 per cent). The chapel is a place of pilgrimage for Italian cyclists. There are also great views from here over the lake.

Next door to the chapel is the cycling museum - admission is 6 euros - but as a reward for those who make the climb by bike, it’s five for cyclists. The museum is housed in a modern, spacious, well-lit building. The collection includes the bikes ridden by Gino Bartali, Fausto Coppi e Eddie Merckx in their Tour de France victories, as well as a collection of pink, yellow and rainbow shirts and other memor­abilia - bone up on your history of Italian cycling to get the most out of it.

As well as the bikes used by the champions there’s a bike that was used by firemen and another by an arrotino (knife sharpener - an Italian insti­tution that’s now dying out) as well as a Swiss army bike. There are some wooden bikes and wheels with wooden rims made by a firm in the village itself.

From the chapel and museum the route heads back to the lake via the Valbrona and a scenic stretch of road along the lakeside.