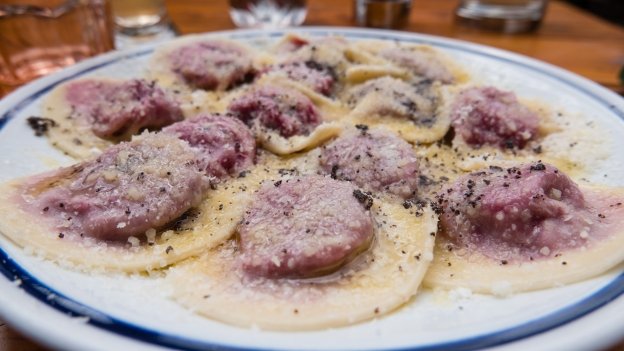 Casunziei — like mezzelune ravioli but filled with rape rosse — red turnips. These are a cousin of the beetroot. You’ll mainly find them around Cortina d’Ampezzo (they are also known as casunziei ampezzani). For an article and recipe (in English) see ChefBikeSki.com.

Panicia or minestra d’orzo (barley soup). This can be more like a risotto than a soup. Hopefully the restaurant will serve it with tutres — a big circular pasta filled with spinach and ricotta, or cabbage, and then fried.

Furtaies — like a pancake, only a funnel is used to spread the batter so that it forms a spiral shape. Served with blueberry jam.

Cajincí arstîs half-moons of a pasta made with potato and yeast and filled with spinach and then fried in oil.

There are other dishes that you’ll come across in other parts of north-east Italy, especially in the Südtirol.

Knödel mit speck or speck­knödel (Canederli con lo speck) — a classic dish of bread dumplings served in broth. If your appetite is big enough you can order a tris di canederli — three different types of dumpling. 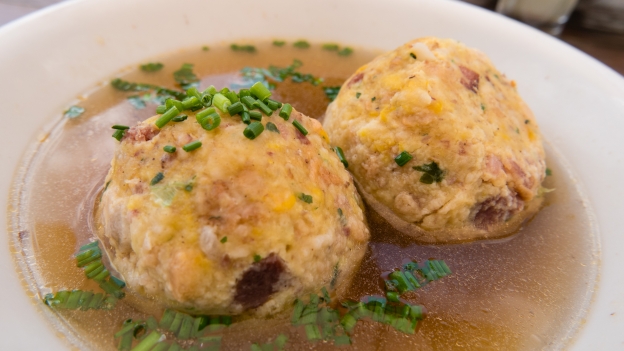 Schlutzkrapfen like ravioli, only the pasta is made with wheat and rye flour, and is a little thicker. Usually the filling is spinach and ricotta.

Spätzle are like small gnocchi, often made with spinach and ricotta. I’ve no idea why, but in the Trentino you may also see these called stran­golapreti — ‘priest stran­glers’.

Spiegeleier mit speck trans­lates as either ham and eggs, or bacon and eggs. Trust me, there are times when this will really hit the spot.

Gulasch is usually served with polenta and funghi porcini. If you’re in luck, the cook will have gathered the mushrooms that afternoon. 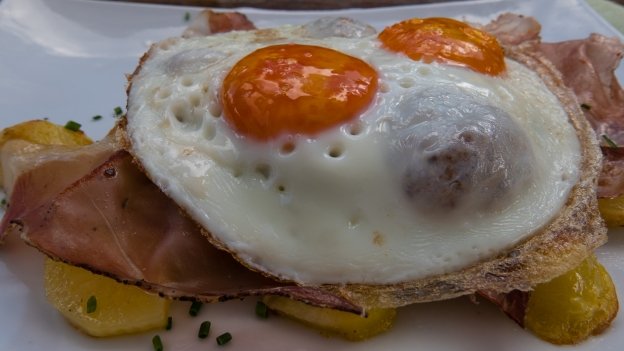 Vinschger Paarl is a rye bread that comes from the Vinschgau. It gets its distinctive flavour from a misture of ground/crushed coriander, fennel and cumin seeds. It’s said that the recipe comes from the Marienburg monastery, high in the Vinschgau near the border with Austria and Switzerland, and it was passed on to a group of local bakers by the monas­tery’s last monk-baker. If you fancy baking some, there’s another article with a recipe on ChefBikeSki.com.

Bauerntoast is a Vinschger Paarl split lengthwise and then filled with speck and cheese and then popped in the oven. The name trans­lates as a farmer’s toast. Yes, I know this is basically a humble ham and cheese toastie, but with a definite twist. 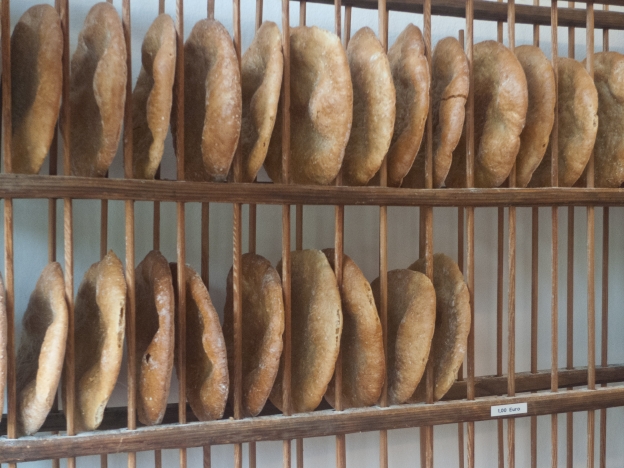 The only brewery I know of in the Dolomites themselves is the Eguia brewery in Santa Cristina Gherdëina (Santa Cristina Valgardena/St. Christina in Gröden), but, Forst and Pedevena, two of Italy’s last remaining independent breweries are based close by (in Algund in the Südtirol and Pedevena near Feltre in the Veneto).

The Dolomites themselves are too high for vineyards, but they are close to some major wine-growing areas in the Südtirol, Trentino and Veneto.

You’ll come across both grappa and schnapps in the region. Grappa is distilled from the leftovers when the grapes are pressed to make wine, and schnapps is distilled from the leftovers when fruit is pressed to make fruit juice (the word schnapps is used differ­ently in America where it is used for a licqueur drink). Ignore the travel-guide clichés about ‘local firewater’ a good grappa or schnapps will stand comparison with a cognac or calvados. I would though be cautious about grappas that have been infused with herbs. These can be ‘inter­esting’ in the sense of ‘tasting like cough mixture’. But that may just be my prejudice. 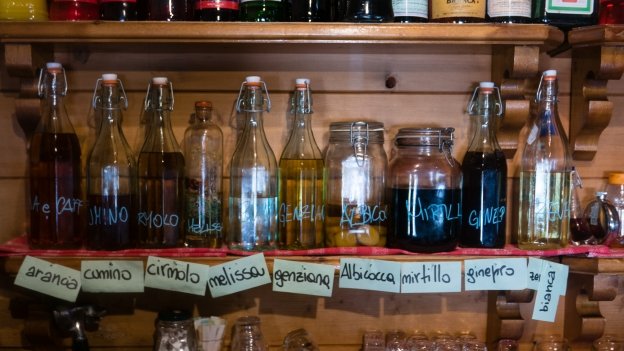