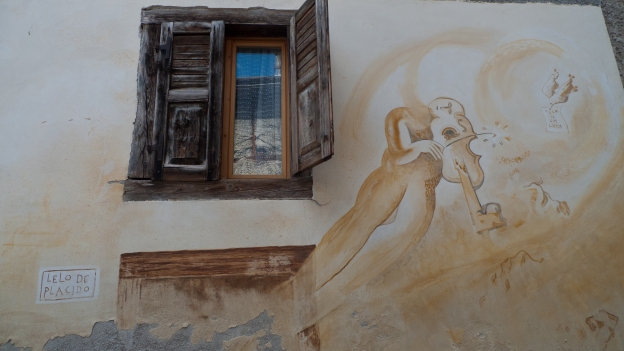 My suggested route takes you to the Passo Duran (1605m) - a climb of a little under a thousand metres over 8 kilometres. The top is the border between the Trentino and the Veneto. The route then descends down to Forno di Zoldo before climbing again to the Forcella Cibiana (1530m) and then on to the village of Cibiana: if you have time, turn off the road and go through the village to see its murals -you won’t be disappointed.

Going on from Cibiana the route joins with the Lunga Via delle Dolomiti cycleway. The cycleway follows the route of the old rail line used by the Trenino delle Dolomiti (little train of thE Dolomites) between Calalzo di Cadore in the Piave valley and Toblach (Dobbiaco) on the other side of the Dolomites. Originally it linked Italy with Austria and you can see the old customs post (dogana) just before Cortina. You can see pictures of the trenino on display in the old signal box on your right just as you join the cycleway. Look out for the lovely old stations along the route.

The cycleway is tarmac for pretty much all the way to Cortina although just before Cortina there’s a short stretch along an unsur­faced track where some people may prefer to take to the road. 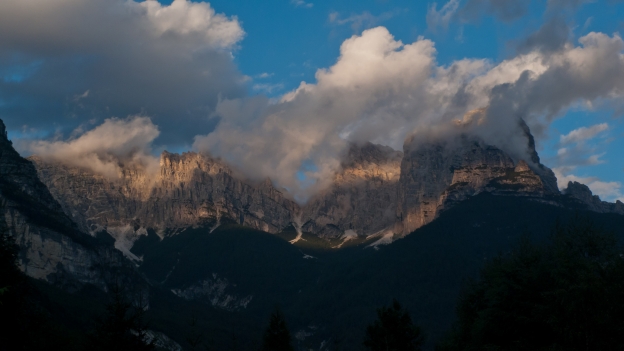 Sunset in the Dolomites near Forno di Zoldo (Veneto)

Forno di Zoldo was, as the names suggests (a forno - is an oven furnace or kiln) a centre for ironworking - special­ising in nails. The industry in the area dates back to at least 1200. In the fifteenth and 16th centuries it was producing 400 tonnes of nails a year. Iron ore from the nearby mountains was turned into nails that were taken by mule train down the valley to the Piave river and by boat to Venezia.

More about the history of Forno di Zoldo

The nails that held together Venezia’s vast navy and merchant shipping fleet were made here. As late as 1873 the cooper­ative Società Industriale Zoldana brought together 600 people employed in nail-making. However, the end was in sight. The industry was facing increasing compet­ition from machine-made nails and in 1890 a disastrous flood swept away most of the forges - which had been built beside the river to use water power - as well as roads bridges and houses.

In common with many hundreds of thousands of others many people from the valley emigrated abroad - and the town is twinned with a small village called Rio Jordao in Brazil where many of the emigrants settled and, it’s said, that some of the inhab­itants still speak the local dialect of Forno di Zoldo.

Others, like so many across the mountains of northern Italy took to the road as itinerant workers or vendors. Forno di Zoldo’s other claim to fame is to be the Valle del Gelato Artigianale - accordIng to the comune itinerant vendors from the valley first began to sell ‘sorbetti’ from small handcarts and in the period between the First and Second World Wars there wasn’t a city in Europe which didn’t have a gelateria Zoldana.

From Alleghe you could head for Cortina d’Ampezzo via the Passo di Giau (2233m) or the Passo di Falzarego (2105m).

You have a choice of hostels: if you continue to Toblach (Dobbiaco) there’s the Toblach Jugendherberge. There’s also a hostel at Calalzo di Cadore (the Ostello La Lunga Via delle Dolomiti) if you don’t mind a bit of a detour off the route — although rather than thinking of it as a detour I would think of it as a chance to cycle the whole of the Ciclabile delle Dolomiti.

Plenty of choice including campsites at Forno di Zoldo and Cortina d’Ampezzo. I’ve stayed at:

The Le Boccole isn’t easy to find - it’s a little way out of town past the road tunnel - which is avoidable, but you need to look for the gap in the guard rail.

There’s a train station at Longarone in the Piave valley.

My vote defin­itely goes to the Insonnia restaurant (on the same site as the Le Boccole campsite). It’s rightly very popular with locals as they serve possibly the best polenta I’ve tasted in the whole of Italy (and in my odyssey through the Italian mountains I ate a lot of polenta). The place has its own unique style: when I asked to see the menu I was shown a notice by the door, with about a dozen dishes on it some of which I knew, but others I hadn’t heard of. When I sat down to eat someone arrived with some wine, and someone with some polenta and gulasch. What I didn’t know was that the meal consisted of everything on the menu. So pace yourself.