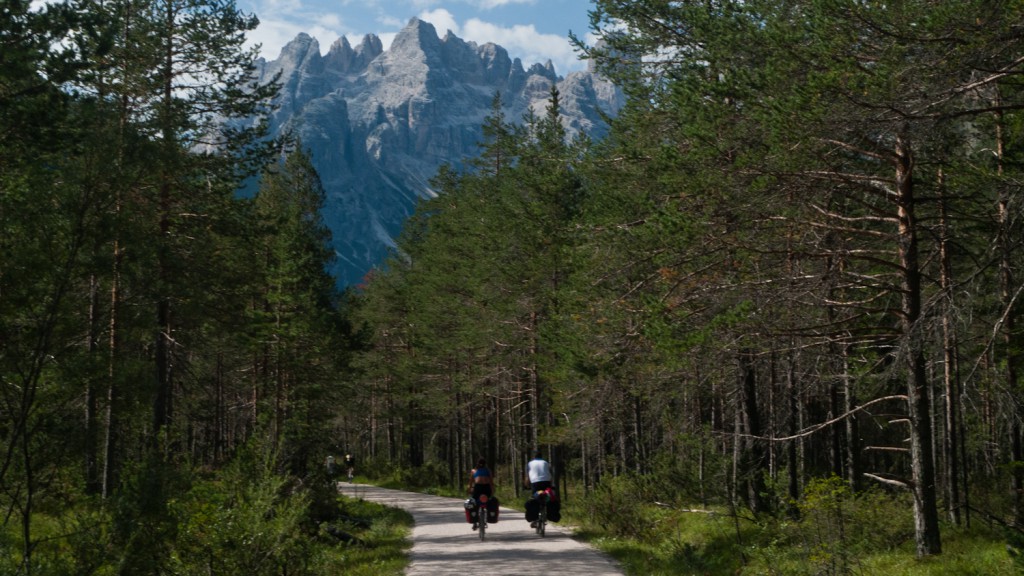 This section of the route takes you from the Cortina d’Ampezzo over the CimaBanche pass (1529m) and into the Sextner Dolomiten (Dolomiti di Sesto) in the Südtirol, passing through the villages of Sexten and Moos and then on towards the Passo di Monte Croce di Comelico (Kreuzbergerpass)(1636m), and on towards towards the towns of Padola and Santo Stefano di Cadore. From here the it continues towards the village of Sappada, an example of the fascin­ating patchwork of languages and cultures across the arc of the mountain of northern Italy. From the village the road leads to the Cima Sappada (1292m), and then down into Friuli through the village of Forni Avoltri and on towards Comeglians.

The cycleway is fairly easy to follow through Cortina - a viaduct takes you to the station and then ride through the car park and pick up the cycleway again. The bad news for those with skinny tyres is that the tarmac runs out just outside Cortina. When I rode the route (in 2012) it was mainly fine, compacted, aggregate. It’s a lovely route so it’s worth doing unless you are on really, really skinny tyres.

Sappada has a fascin­ating history. The language of the area (plodarisch - or sappadino in Italian) is a form of German that is thought to date back to the eleventh or twelfth century - mingled with Friulian.

More about the history of Sappada

Their language is shared with the village of Sauris in the mountains a few miles to the south. It’s believed that the village was settled in the early middle ages (when temper­atures were warmer than they are today), and then, when temper­atures got colder again, they were cut off from regular contact with other German-speaking areas. Even today, the area feels remote - although this didn’t stop it becoming prosperous supplying timber to the shipbuilding industry of Venezia.

Sappada is now a small ski resort, and the main drag isn’t especially inter­esting, but if you have time it’s worth exploring Sappada Vecchia and its timber houses built using the blockbau method - where a notch is cut into the logs so that they slot together.

There’s lots of inform­ation about the archi­tecture, culture and language of the area on www.plodn.info the website of the Associazione “Plodar”.

When I passed through there were strawmen dotted along the road sides, as part of a Hay Festival - I asked the tourist inform­ation office if this was some sort of tradition and the answer, sadly, was no. But still worth looking out for.

If you’re there in September you may happen upon Sappamukki - a festival to celebrate the return of the cows from their summer pastures. The cows are accom­panied and by a brass band. A tradi­tional festival, something for the tourists, an excuse to have a good time? Probably a bit of all three.

From Cortina d’Ampezzo you could head towards the Sella Ronda via the Passo di Falzorego (see the east-west route).

From Toblach you could head along the Pusterbike towards the the Brenner pass or towards Brixen (Bressanone), or you could pickup the the Drauradweg (Ciclabile del Drava) to Lienz and on to Maribor in Slovenija (see Through Austria following the Drau from Toblach to Tarvisio on this site.

The new München-Venezia cycle route also passes through Cortina and Toblach so you could follow it south to Venezia.

You could ride to the Passo Falzorego and back, or to the Tre Cime di Lavaredo.

There are plenty of hotels along the way.

There are a number of campsites along the way:

I’ve also stopped by the Caravan Park Sexten near the villages of Sexten and Moos on the road to the Kreuzbergerpass. Despite the name the site also has a large area for tents.

The route has been designed to end at the train station at Carnia.