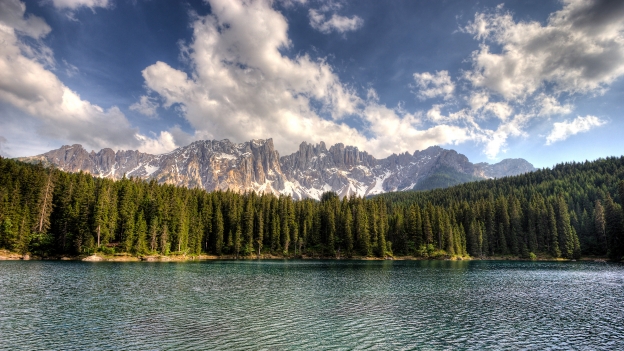 The Karer See with the Latemar group in the background. Picture from Wikimedia Commons

The route takes you into the Südtirol and to the Karersee (Lago di Carezza) before descending through the woods to Moena. Great views over the Rosengarten group of mountains when these aren’t hidden by clouds or trees. Lovely views down over the Adige valley as well.

The Karersee (Lago di Carezza is an essential stop on the route). The name in Ladin is “Lec de Ergobando” (or “arcoboàn”) the Rainbow Lake. The lake, with the mountains reflected in its surface is, like the Tre Cime di Laveredo, one of the icons of the Dolomites. The name comes from a local legend as does the name of the Rosengarten mountain group which you can see from the lake.

The legends of the Karrersee and the Rosengarten

According to the legend the waters of the lake were home to beautiful nymph called Ondina. The wizard of Latemar was in love with her and tried several times to kidnap her. One day he decided to make a rainbow appear above the lake with the aim of attracting the nymph. She came out of the lake but was terrified at the sight of the wizard and fled. In a rage the wizard the wizard threw the rainbow into the lake where it shattered into a thousand pieces, and for this reason, according to the legend the lake shimmers with the colours of the rainbow.

According to another legend, King Laurin was the powerful king of a nation of of dwarfs. He had a an immense rose garden with red roses in bloom all year. His daughter however, cried all day from loneliness. A price fell in love with her, and sought the king’s permission to marry her. When the king refused his permission the couple eloped. In his rage the king sought to destroy the rose garden his curse was that the mountains would never again see rosa (pink) either by day or by night. The curse wasn’t entirely water­tight and the mountains glow pink in the at dawn and dusk - the periods of the day that are neither night nor day.

The route is partly signposted: in the Trentino the signposting is excellent but there are no signs at all in the Südtirol section of the route (signs are a contro­versial issue: when I was there, the Südtirol reluct­antly agreed with the national government to replace all of the signs on its walking paths with signs showing both the German and Italian versions of the place names). One tip is that the map shows the numbers of the footpaths and these are shown on the signs.

Crossing over the border into the Sud Tirol - the contrast is striking with german-language songs on the radio (admit­tedly trans­la­tions of Brit-pop songs). There’s a strudel trail between different enricher.

In Moena look out for the panel commem­or­ating Richard (‘Riccardo’) Löwy. The story of human decency and kindness is worth retelling - although sadly there was no happy ending.

Richard Löwy was an engineer with the Auro-Hungarian empire. Born into a Jewish family in Bohemia, in what is now the Czech republic, he studied at the university of Vienna before being called up to join the imperial army. He was sent to build the defences at the pass at San Pellegrino above Moena.

Many of the men from the village had been sent to fight far away to fight on the eastern front. Leaving the remaining men and women strug­gling to keep farms going. The young second lieutenant went to his superiors to ask them assign to men being called up to the Army from the area to work on the construction of the forti­fic­a­tions of the pass at San Pellegrino. He organized their work so that they were able to go back to their fields and pastures for seasonal work like haymaking. In addition he built a laundry so that the women of the village could earn a regular income washing uniforms and making puttees.

Löwy quickly came to be held in high regard and affection by the villagers and in December 1916 the Consiglio Communale made him an honorary citizen in recog­nition of his work for the village, and they presented him with a gold watch.

With the Italian retreat following their defeat at Caporetto, Löwy headed south to the new front line at Riva on Lake Garda. With the end of the war he returned to Vienna.

In 1938 Austria was annexed by Germany. The Anschluss as it was known was quickly followed by a campaign of perse­cution against Austria’s Jewish population. Increasing numbers looked to flee the country. Even Mussolini’s Italy had opened its borders to asylum-seekers and so Löwy along with his wife headed for Moena where he knew he had friends. They were later followed by other members of the family.

The refugees had fled with almost nothing and their economic position became steadily more precarious. They were supported throughout by the gener­osity of friends in the Moena community. Then in September 1943, Italy surrendered to the Allies - and in response, German troops flooded over the border to reinforce their defences on the Italian front. Almost immedi­ately they began arresting and deporting any jews they could find.

The hotel ‘Al Cervo’ was taken over as the German headquarters with the owners remaining only in their private quarters. They continued to support the Löwys - who were living in a house a short distance from the hotel - by sending their young daughter with food. They lived like that for two months but their position was becoming increas­ingly dangerous. The commander of the local carabinieri took charge of finding them hiding places in the cottages in the woods above the village.

On the 11 November Löwy and his family were caught by German police and taken to the prison in Trento. On the 22 of February 1944 they left on the train for Auschwitz.