This area provides the summer meadows for the nearby village of Bellamonte. A malga is a dairy/farmhouse used while the cows are grazing in their summer pastures. Many now double as mountain restaurants sometimes selling the farmer’s own produce - at the Malga Bosche you’ll see a number of items on the menu are marked as produzione propria - ie their own produce. A baita is a small cabin used by cowherds or simply used to store hay before it is taken down to the village. 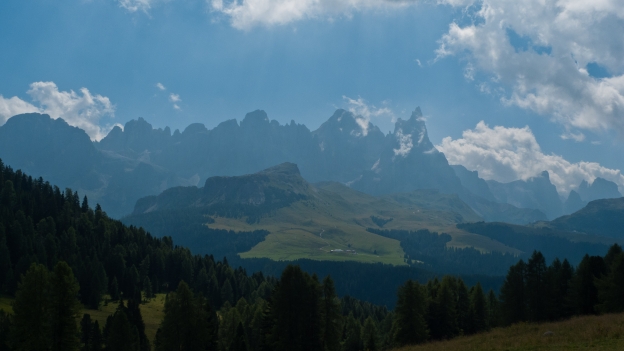 I took the chairlift up from Castelir then followed the sentiero to the Malga Bosche along the way there are some fine examples of baite (buildings used to store hay before it was taken down to the winter cow sheds). The Malga has panoramic views over over the Pale di San Martino - and they do a pretty good apple strudel.

I then took the path back over to the Rifugio Lusia (not much of a climb really and nothing steep). Another great set of views towards (I think) the Rosengarten/Catinaccio.

Coming down from the rifugio, the official route goes down to the Baita de le Strie and then follows the piste. I took the 660 sentiero down - not signed or way-marked. Through meadows with people working to cut the hay, and rejoined the official route later and came out further up the road towards Bellamonte and Predazzo. 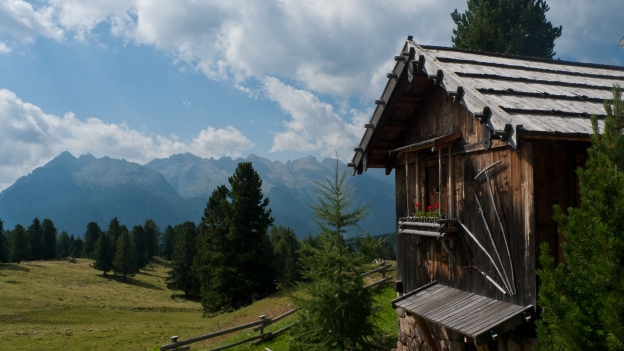