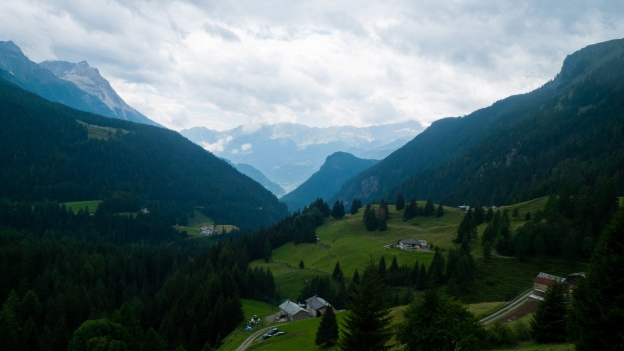 The road climbs pretty gently from the Lago di Como (200m) along the Sentiero Valtellina to Tirano. It starts to climb more deeply after Tirano as the route passes through the Val Bernina in one of the Italian-speaking areas of Switzerland, before turning back into Italy via the Forcola Livigno (2315m) into the ‘Little Tibet’ of the valleys around Livigno. The tour continues to Bormio (1217m) via the Passo d’Eira (2208m) and the Passo di Foscagno (2291m). From Bormio it climbs again along the Valfurva following the Torrente Frodolfo to the Passo di Gavia (2621m) and a dramatic descent into Ponte di Legno with views over the Presanella massiccio. The final pass is the Passo di Tonale (1883m) on the border with Trentino.

Most of this area was once part of the prede­cessor to Switzerland, before Napoleon redrew the borders. It retains strong affin­ities and connec­tions with Switzerland, and the local author­ities in the region cooperate in promoting the area under the banner of the Alta Rezia.

At Bormio you have the option of climbing the Passo di Stelvio (2758m) either as a day-ride, or crossing into Switzerland, or the Südtirol.

This route is designed to connect with my Tour of the Western Lakes route and Dolomites (West-East) route - offering the possib­ility of an odyssey of almost 1,000 kilometres from Piemonte in the west, to Friuli in the east.

I went over the Passo di Gavia in early July and there was snow beside the road and it was cold. July, August and September are probably your best bets.

There are lots of hotels along the way. There are campsites near Poschiavo, Livigno, Bormio, Temù near Ponte di Legno and Ossana at the end of the final section.

Tirano has rail connec­tions with both the Italian and Swiss rail systems and the first part of the route follows the rail line between Tirano and Sankt Moritz. There are train stations at Edolo near Ponte di Legno and Grumo San Michele which is within striking distance of the end of the route at Ossana.