The 2016 earthquakes in Central Italy

In 2016 there were three earth­quakes in the area at the heart of this route. The earth­quakes have pretty much reduced the towns of Amatrice and Arquata del Tronto to rubble, and caused severe damage across a wide area. It’s estimated that about 30,000 people have had to move out of their homes.

Several towns have suffered signi­ficant damage, and many hotels and other accom­mod­ation have been forced to close. It is still possible to find good-quality accom­mod­ation, but please do your research, and plan carefully for this section. (Note to cycle-campers: all the campsites in the area are open with the exception of the Camping Monteprata).

If you want more inform­ation about the progress of the work in repairing and reopening roads in the area, ANAS, the national highways agency, has set up a dedicated site: ANAS-sisma2-16.it. 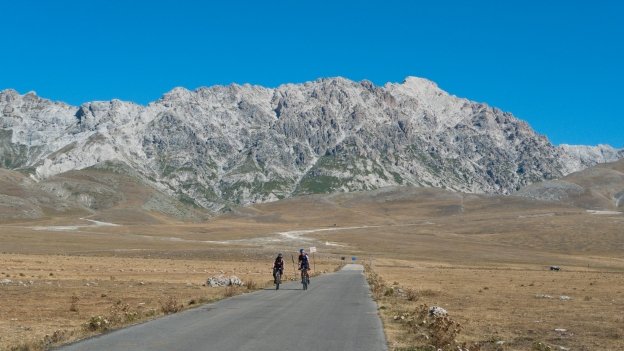 This route takes you for more than 700 kilometres through the chain of national parks along the Apennines of central Italy. The ride is fairly challenging - but not too challenging. It follows quiet roads wherever possible - although there are a couple of brief sections on busier roads.

The Apennines are the chain of mountains that run almost the whole length of Italy from Sicilia to northern Toscana. They are Italy’s equivalent to North America’s Great Divide (except you’d have to imagine North America with its mountains but without the Great Plains). As well as being the watershed, these were literally a great divide: until the coming of the railways it was quicker to sail from Ancona on the east coast to Rome on the west.

The tour goes through the national parks of the Maiella, the Gran Sasso and the Monti Sibillini (not to mention a couple of regional parks and reserves). It starts in the Abruzzo region, passing through Umbria, Le Marche and ends in Toscana. (Note: there are other national parks in the Apennines but I decided to keep the title short and simple).

The route takes you through some of central Italy’s wildest highlands: this is a tour for people who like their cycle tours high and wild - to borrow a phrase from Leonard Cohen. But you can also visit some inter­esting cities: best known is the UNESCO World-Heritage-listed city of Urbino, but there are some less well-known gems including Santo Stefano di Sessanio, Camerino, Gubbio, Pennabilli and San Sepolcro. 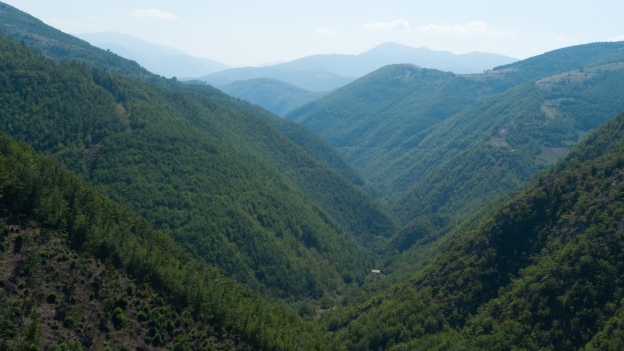 For altitude profiles see the guides to the individual sections of the tour.

My description goes from south to north - but there’s nothing to stop you doing it the other way.

The tour takes a fairly meandering route, but there are options to take a more direct route if time is limited. 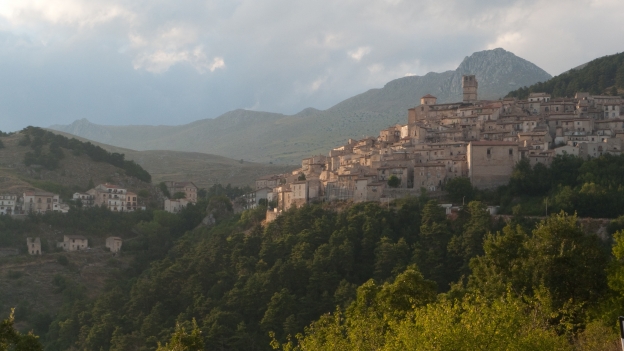 I did this route in the second-half of August and early September. Much of it is fairly high so is cooler - but I suffered in the heat on some of the climbs. If possible, plan your days to avoid long climbs in the early afternoon.

From San Sepolcro you can continue via Anghiari to Arezzo. Where you can connect with the Ciclopista del Sole (eurovelo 7) route.

If you are flying, the easiest option may be to fly to Pescara and then get the train. I say may because the flight times from some destin­a­tions aren’t partic­u­larly convenient - either leaving very early in the morning or arriving in the evening (see Pescara airport website). You could always stop overnight in Pescara. The train is bike-friendly and takes 72 minutes. The airport is an easily-rideable distance from the train station.

You could also use the bike-friendly trains from Pescara along Italy’s eastern seaboard to get to the airports at Rimini, Bari and Bologna. Bologna is also a major rail hub served by the Deutsche Bahn Eurocity trains.

If you change trains at Tiburtina: trains from Fiumicino get into Tiburtina on Binario 5 (Platform 5) you then need to head for Binario 2-Est this is in a separate section of the station and not to be confused both Binario 2. The easiest way to get there with a bike is to keep following the underpass below the station, however, the signs all seem to be designed to route passengers up the escal­ators to the concourse above the station and then down another set of escal­ators. There are lifts of course, but it’s still complicated. Follow the signs for Piazzale Est and the Circonvallazione Tiburtina. You may need to ask the guys on the barriers to let you through.

On the subject of Fiumicino airport, friends flying through there have reported waits of over an hour for their luggage - so allow plenty of time for connections.

If you decide to overnight in Rome it’s worth bearing in mind that the train from Fiumicino airport to Tiburtina stops at Trastevere station in Rome - this is a more convenient station to arrive at than Tiburtina.

The zip files contain pdf files packaged together for convenience.

You shouldn’t have too much trouble finding accom­mod­ation - although there are points where the route makes a detour in order to go to towns with places to stay.

There are several hotels and rifugi along the way:

This aren’t a huge number of campsites, but there are enough.

and a number of others are within easy reach

There’s a station at the end as Sansepolcro, but it’s probably easiest to continue on to Arezzo and catch a trenitalia train. The reason for this is that to take a bike on the trains operated by the Umbria region you need to book three days in advance (officially at least, the cap di treno may let you get on without a booking) - see Umbria Mobilità: Carta della Mobilità and timetables for the Umbria Regional trains.

parks.it (it/en/de/fr) is by a long way the most useful resource for the parks along the way. It includes a very helpful accom­mod­ation search engine. 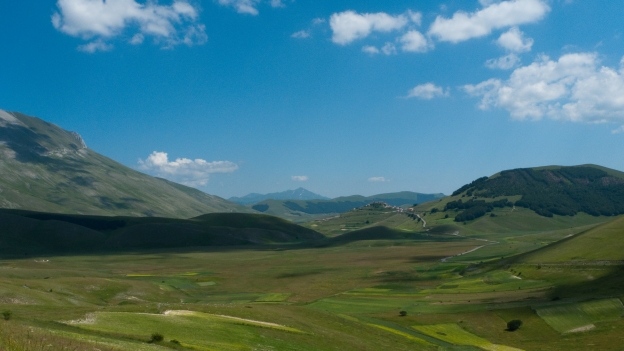