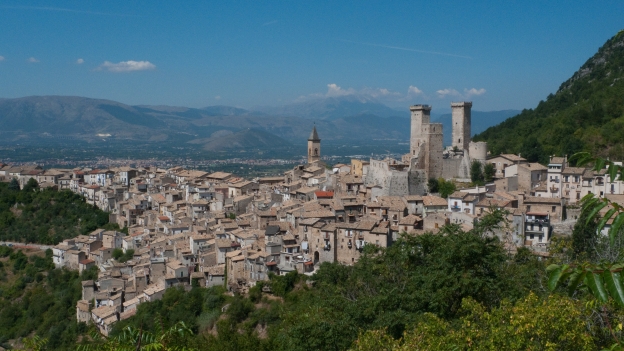 View over Pacentro near Sulmona (Abruzzo)

This first part of the tour takes you through the national park of the Majella and on from there to the highlands of the Gran Sasso park, and the highest point of the route in the high plains of the Campo Imperatore.

Sulmona was the home town of the poet Ovid. Its present-day claim to fame are the sweets (candies) . Confetti are sweets given to guests at weddings, but the most eye-catching are the fiori di Sulmona - sweets in the shapes of flowers, often complete with bees or ladybirds. You can see a selection on confettisulmona.net. There are fiori for weddings, and wedding anniversaries, as well as baptisms, first commu­nions, and graduations. 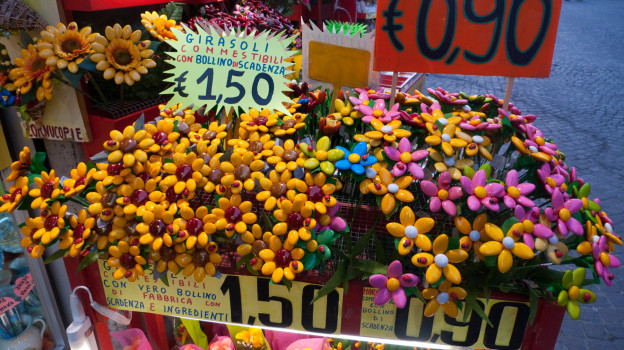 Once you’ve finished admiring the flowers there’s then the climb to the Passo San Leonardo (altitude difference 800 metres), passing by the town of Pacentro - the view back over the town is magnificent.

At the pass you can admire the Majella mountains - a dramatic wall of mountains that runs north to south, with Monte Amaro 2763m (amaro means bitter in Italian). In the winter of 1943, during the Second World War, this impreg­nable wall of mountains formed part of the German Gustav Line. There’s a road that leads up to the Blockhaus on the the ridge, if you fancy a side-trip.

From the pass you head towards the small village of Sant’Eufemia a Majella (where there’s a grocer’s and a nice bar-restaurant).

After Santa Eufemia I’ve suggested a variant the high road to Caramanico. The road is officially closed (hence the strada chiusa signs. When I did it in 2011 the road was passable, but this is obviously a bit of a gamble that I’d only take if you have time and energy in hand to retrace your steps in you have to. There were a couple of spots where the road had sunk leading to a step of about a half metre or (so watch out for these). The road was but getting overgrown and I wondered whether the local author­ities had decided to let it return to nature. This road takes you to the Da Rondinella campsite/B&B/ristorante. (Updatethe restaurant no longer has a website, but it looks like it is still open). From there you can go down into Caramanico on a road that’s open as normal.

If you stick with the main road, you’ll come to a tunnel. There are a couple of long tunnels under Caramanico. You can avoid these by bearing left and taking the side road. This will take you into Caramanico. 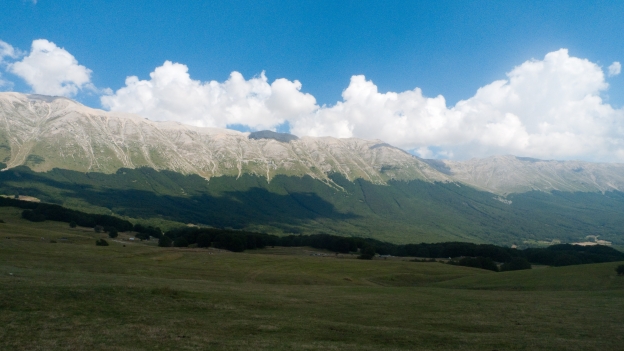 After Caramanico the route makes a long descent via Torre da Casauria down into the valley of the Pescara river, before starting to climb again via Torre de Passeri (172m) towards Castel del Monte (1310m). It’s a long south-facing climb with very little shade so it’s best to do it in the morning if you can. There’s also not much in the way of water or services: there’s a fontanella (drinking water source) and a small bar/shop in Villa Santa Lucia di Abruzzo.

This stretch takes you from the Majella national park into the Parco Nazionale del Gran Sasso. It’s a gorgeous ride: the highpoint for me was the views back over the village of Corvara perched on a spike of rock. The view of Castel del Monte in the late afternoon sunshine was also a memorable one. 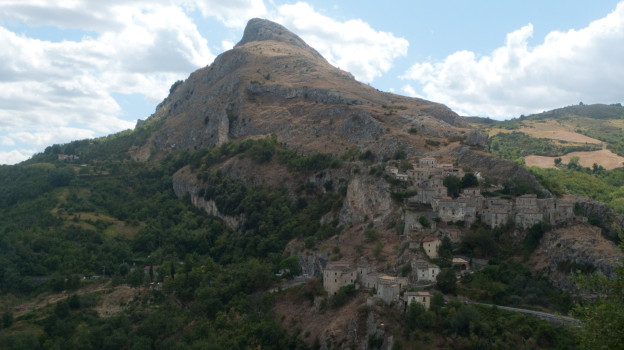 View of the village of Corvara (Gran Sasso national park)

From Castel del Monte it’s a relat­ively easy ride to Santo Stefano di Sessanio. Look out for the Rocca di Calascio high above you. The rocca (fortress) is the highest in the Apennines and it’s a landmark that you can see for miles

The rocca has been used as a setting in a number of films, most of which sank without trace - the main exception being the Name of the Rose. There’s an atmospheric restaurant and rifugio at the Rocca (see places to stay) - well worth the climb.

George Clooney decided to set the film The American in the area in response to the earth­quake that hit the city of L’Aquila in 2009 (wikipedia article on the 2009 earth­quake). The earth­quake, and its aftermath, have been the subject of bitter contro­versy. Santo Stefano itself suffered a bitter blow in the earth­quake - losing the medieval Torre Medicea that was the symbol of the village. Today there’s a scaffolding tower that marks the shape of the tower as it once was. When I was there in 2011 the scars of the earth­quake were still evident in the village and in the surrounding area.

Santo Stefano has two other claims to fame. The first is lentils. These grow at between 1200 and 1400 metres. Santo Stefano is probably the most presti­gious lentil-growing area - although it has rivals in the Piano di Castelluccio and Colfiorito - both further along the route. Lentils are an essential part of the meal on Italian New Year’s Eve as they are thought to symbolise money and ‘porta fortuna’ (bring luck)

The second is the albergo diffuso (it/en). This was the initi­ative of a young Swedish entre­preneur Daniele Elow Kihlgren who came across the village that was gradually dying and falling into ruins, bought up most of the buildings and set to work restoring the village - with metic­ulous attention to detail. The attention to detail including inter­viewing the remaining elderly residents, and setting up a workshop to use locally-produced wool to weave blankets for use in the hotel. The Santo Stefano albergo diffuso wasn’t the first and there are lots of others, but it has been influ­ential and is now involved in the restor­ation of the Sassi in Matera, as well as a number of other villages in the Apennines.

The bad news is that the prices in the albergo diffuso are pretty steep (but at about 150€ for a double room maybe not completely outrageous if you fancy treating yourself). For an article about staying in the albergo diffuso see london-unattached.com) The good news is that the Sextantio devel­opment has had a spin-off effect in stimu­lating the devel­opment of other quality accom­mod­ation options. 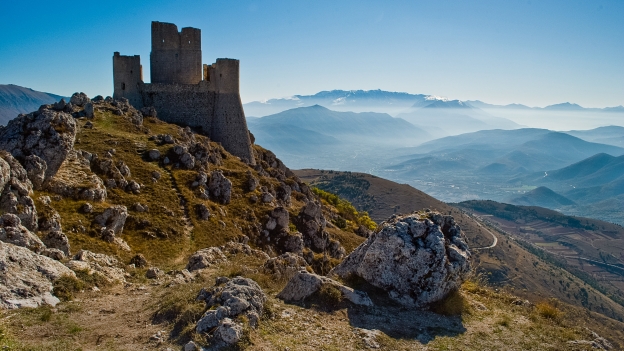 On to the Campo Imperatore

Leaving Santo Stefano there’s then a climb to the Campo Imperatore. These high plains used to be a major area for sheep farming with the flocks of sheep being brought up here for the summer from the plains of Puglia (the transumanza) and then returning for the winter. At its height, there would have been tens of thousands of sheep coming here.

Today there are still sheep around, as well as the white long-horn Chianina cattle. The landscape has an other-worldly quality. I love it but perhaps it’s not for everyone, and for all I know, what we see today may be the product of defor­est­ation: a man-made ecolo­gical disaster. 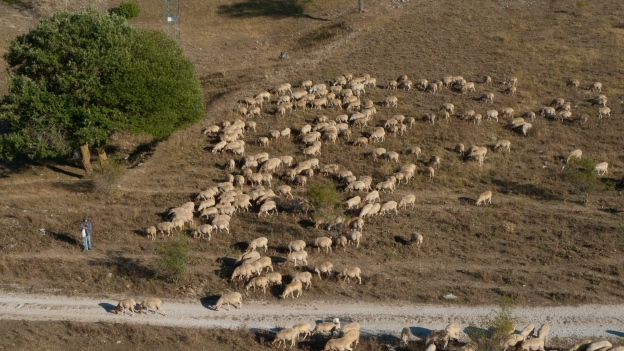 I did this section at the end of a long hot summer and, as you can tell from the pictures, the grass was pretty dried out. It would be especially beautiful to ride here if you could catch the perfect moment in late spring and early summer as the grass is at its greenest and the snow still on the mountain tops.

There’s a bar-rifugio (Rifugio Racollo) at the lake a few kilometres from Santo Stefano (outside of the main tourist season the rifugio is only open for part of the week). Apart from this there are no services until you get to Fonte Cerreto (although there is a hotel and rifugio at the Campo Imperatore ski area) if you fancy a detour .

Near to the Lago di Fileto the road starts to drop down towards Fonte Cerreto. Fonte Cerreto is the base station of the cable car to the Campo Imperatore ski area; there’s not much there apart from a couple of hotels, a campsite and a very welcome restaurant and bar. 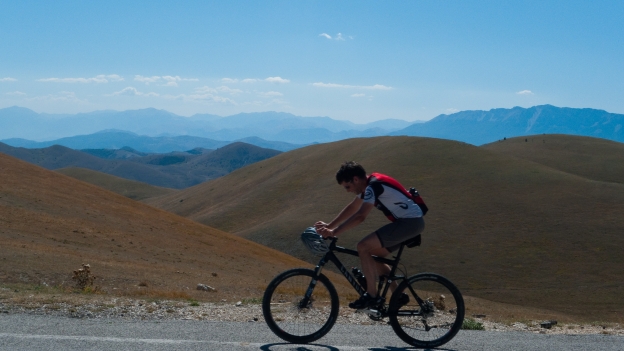 Amatrice and the Lago di Campotosto

The next stop after Fonte Cerreto is the Lago di Campotosto, with a bit of a climb to the Passo di Capannelle (1299m) along the way. After Campotosto you briefly pass into the Lazio region and the town of Amatrice. Amatrice is home to Spaghetti all’Amatriciana. Spaghetti all’Amatriciana is considered a classic of Roman cooking and a speci­ality of the Lazio region although. Although its a classic of Roman cuisine, and very well-known outside Italy, it’s actually a dish you’ll rarely see outside of Rome. Except of course in Amatrice.

This section of the ride starts in Sulmona mainly because it’s easy to get to by train. As an altern­ative, you could start at Rivisondoli and follow the very nice road to the Stazione di Palena and then follow the Valico della Forchetta via Campo di Giove, to the Passo di San Leonardo (1282m).

You could head direct from Castel del Monte towards Fonte Cerreto, but the ride to Santo Stefano di Sessanio is very enjoyable - especially the last section between the Rocca di Colascio and Santo Stefano itself.

The best bets for finding places to stay in the Parco della Majella are Campo di Giove and the spa town of Caramanico Terme (‘terme’ is the Italian word for ‘spa’). Caramanico is the main tourist centre for the park. In the Gran Sasso park the main centres are Castel del Monte and Santo Stefano di Sessanio. The website for the hotel/rifugio at Campo Imperatore http://www.hotelcampoimperatore.it.

I stayed at the Ristorante-Bar Pensione Serena on the eastern shore of the Lago di Campotosto (0862 900213).

Campsites on or near this section of the route:

When I did this route there was a campsite at Fonte Cerreto called the Camping Funivia del Gran Sasso. It doesn’t have a website so I’d defin­itely phone ahead to check it’s open (phone numbers: 0862 60613 348 0312329). The listing on gransassolagapark.it includes an email address.

There’s an Agricampeggio near the Lago di Campotosto: the Agricampeggio Cardito, but out of season it may only be open at weekends, again ring to check.

When I passed by there seemed to be a lot of campervans parked up in the picnic areas on the side of the Lago di Campotosto and it looked like wild camping may be permitted (or at least tolerated) here. 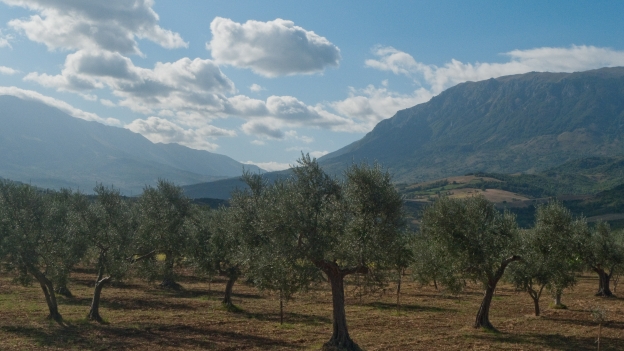