This section of the tour continues from Amatrice and into the Monti Sibillini national park on the borders between Umbria and Le Marche. Crossing the flower-filled plain at Castelluccio di Norcia before heading for the lake at Fiastra, and then the gorge of the Fiastrone river and on to the hilltop town of Camerino.

The climb to the Forca di Canapine (1541m) on the border with Umbria, and then a short descent takes you to the Pian Grande a high altopiano surrounded by mountains. Its most remarkable feature is the mosaic of colours from the wildflowers growing among the crops. 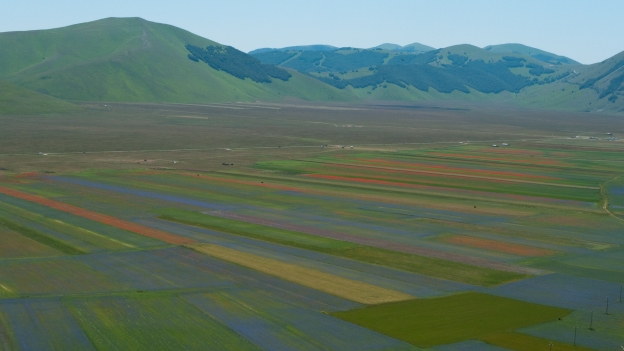 Wildflowers on the Grand Piano di Castelluccio in the Monti Sibillini

The Pian Grande is a popular destin­ation, especially it felt, with Italian camper­vanners, so there’s a fair amount of traffic on the road across the plain. At the centre of the altopiano is the village of Castelluccio di Norcia, on a small hill, like an island in an inland sea. This is the only place you’ll find somewhere to stay or to eat on the altopiano itself.

After Castelluccio it’s on to the third region of the day as a climb to the Passo di Gualdo (1495m) takes you into the Marche region. There’s a big descent down to the attractive villages of Castelangelo sul Nero and Visso. Look out for the view of Castelsantangelo’s medieval defensive walls as you descend.

After Visso you head for the ski resort of Ussita. There’s a choice of hotels as well as places to eat and buy food, before heading for the Lago di Fiastra. I took the road via Cupi, but in retro­spect, I regret not taking the road via Casali di Ussita - which looks like it might have been an even more scenic option.

At the lake there’s the village of San Giovanni al Lago where there’s Verde Fiastra - a campsite that also offers rooms as well as a small beach resort. There’s also a hotel and ristorante. 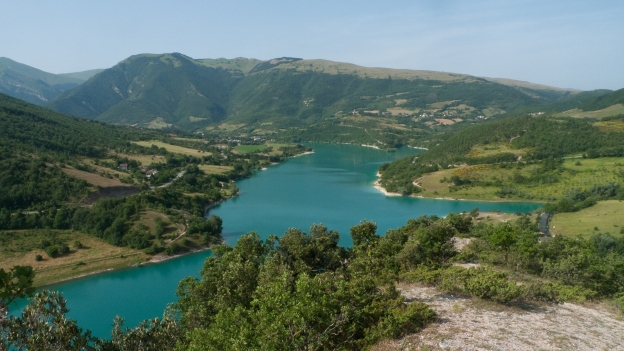 The Lago di Fiastra in the Monti Sibillini national park

It’s a great ride on from the lake through the dramatic gorge of the Fiastrone river. On the way you passing the Santuario di Macereto designed by Bramante. It continues to follow the river as it leads through Camporotondo di Fiastrone and into the Chienti river at Belforte di Chienti.

The Chienti valley is one of the historic routes over the Apennines and the Strada Statale 77 is in the process of being upgraded to provide a major road axis between Le March and Umbria. The good news for cyclists is that the new road has left the old road as a quiet option with very little traffic. From Belforte del Chienti the old road threads its way past the Lago di Pievefevera before you turn off to pick up the road to Camerino. On your way look out for the ruins of a fortress built by a nobleman who grew rich taxing travellers on this road: I don’t know whether Italian has an equivalent to the English ‘robber baron’.

Camerino is another gem: with superb views from the city walls over the surrounding countryside. You won’t be surprised to hear that the views mean that there’s a climb to get there.

The city was captured by Cesare Borgia and annexed to the Papal State (at a time when the Pope ruled over much of central Italy and was very much a civil authority as much as a religious leader), and he built the castle (Rocca Borgesca) to control it. As well as admiring the views from the city walls the Palazzo Ducale (now part of the University) is well worth a quick look.

I’m kicking myself for missing the Camerino’s jewel of a theatre Teatro Filippo Marchetti (theatre) - although so far as I can see, with the exception of certain open days, if you want to see the theatre you’ll need to buy a ticket for a show.

There are three hotels in town. The most central is I Duchi - they sponsor the cycling club and were quite relaxed about me keeping my bike in my room (in fact they suggested it). On the subject of the cycling club, they were quite defin­itely the friend­liest bunch of cyclists I’ve come across in my travels and I still remember the guy who very patiently waited to make sure I didn’t get lost as I trundled my way slowly up the hill.

Although I think the Piana Grande di Castelluccio is a real highlight of the tour, but at the Forca Canapine there is the option of heading to Norcia via the Forca di Santa Croce. From Norcia you can then take the road to the Forca d’Ancarono (1008m) and on from there to Preci.

Alternatively you could head on to Triponzo and the Nera valley. There is a cycleway on the old railway line between Norcia and Spoleto, but the cycleway is unfor­tu­nately not complete when I did parts of it in 2011 there was a good section between Sant’Anatolia di Narco and Piedipaterno, but north from there it becomes rougher. I haven’t been able to confirm whether or not this is still the case. There’s also a section from Norcia, but I don’t know what it’s like or how long it is.

The route described here is the route I took, but looking at the map there is a scenic road from Camerino which then turns to head for Nocera Umbra following the Potenza river. 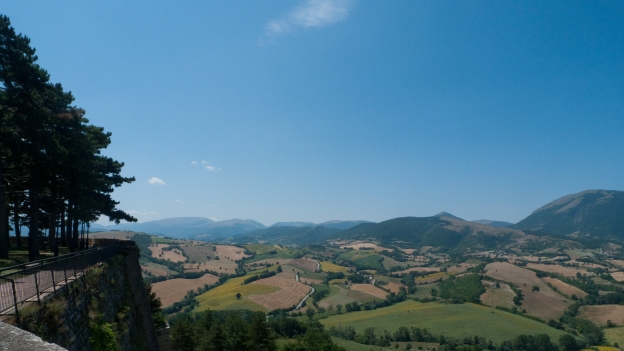 You may find it worth knowing about the Al Kapriol (0736 808119) if, like me, you find yourself running out of daylight and energy on the way to the Forca di Canapine.

Find places to stay with Booking.com

If you are travelling out of season it’s defin­itely worth ringing in advance to check whether these hostels will be open. The hostel in Norcia is also available to let by groups, who can take over the whole place.

The comuni (local councils) in the park also maintain a number of aree sosta camper that will primarily be of interest to camper­vanners but so far as I could tell from the page about the sosta camper areas in the Monti Sibillini only one has toilets and showers. Although I guess that you might be able to camp at them if you were really stuck I defin­itely wouldn’t rely on them.

The best sources of inform­ation about the park are:

The park produces an extremely useful guidebook (what’s it called). There’s also a guidebook with mountain bike rides Pedalando nel Parco. if you’re planning on spending any time in the area then the Kompass map is well worth buying.