This section of the ride follows some lonely roads on the ridge of the Apennines through the Mote Cucco parco regionale, and to the World Heritage-listed city of Urbino in Le Marche. My suggested route takes you to the atmospheric Umbrian towns of Gubbio and Pietralunga, but if you want to, you can continue straight on.

From Camerino the route takes minor country roads towards Serravalle di Chienti. There’s a brief, unavoidable, section on the main road, towards Colfiorito. Hopefully, with the opening of the new SS77 in 2015 (see below) this section will be a lot quieter. Just before Colfiorito, you turn onto the quiet SP 440 which takes you through another delightful hidden altopiano. In Colfiorito there are shops a ristorante and three hotels.

One of the things that I hadn’t realised before I set out on this journey was the extent to which the history of this part of Italy is inter­woven with earth­quakes. From the earth­quake that hit the L’Aquila area in 2009, we come to the scene of an earth­quake a dozen years before. Along the route, you may well have seen the wooden chalets built to house those made homeless by the earth­quakes. The centre of Nocera Umbra was hard-hit with 85 per cent of the homes rendered uninhab­itable. When I was there in 2011 the town had been rebuilt and I would never have guessed that it had suffered such extensive damage - although the centro storico seemed almost entirely deserted in the evening. Hopefully, life will return to the centre but it may take a long time. 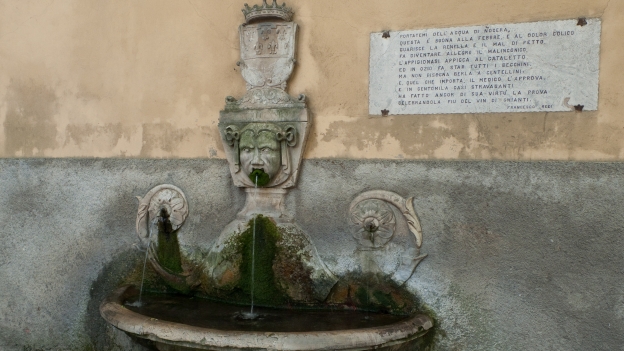 Nocera is famous for its waters, thanks to the poem Arianna Inferma by Francesco di Redi who was a physician and poet (and according to the wikipedia article, father of modern parasit­ology). Here is his tongue-in-cheek endorsement of the miraculous qualities of the water:

“ Bring me some of the water from Nocera
It’s good for fever and stomach pains
heals gallstones and bronchitis
makes the melan­cholic cheerful
puts the ‘for sale’ sign on the funeral bier,
and leaves the gravediggers to laze around,
no need to drink small sips;
and for what it’s worth it has the doctor’s approval
and in a hundred thousand unique cases
it has more than proved it’s worth
and is celeb­rated more than the wine of the Chianti  ”

From Nocera Umbra the route climbs back up into the mountains and crosses into Le Marche. It then follows (sort of) the ridge, to the junction with the main road at Cancelli.

The junction is a little tricky: you need to bear right following the signs for Sassoferrato and Roma, crossing over the SS76 (at this point safely tucked away in a tunnel). Then at the next junction go right (signed Campodiegoli) before turning right again onto the SP16 for Sassoferrato. Stick with the SP16 until the junction with another strada provin­ciale (the SP47 Monte Cucco). Take the SP47 as it parts company with the SP16 a little further on (turning on the left signed Bastia, Viaccie etc). The junction is pretty hard to miss, but if you find yourself at a railway level crossing, you’ve succeeded, and you need to turn round. On the SP16 there’s some traffic including lorries, heading to the main SS76, the SP 47 is very quiet. (Note for OSM users: this road seems to have been misclas­sified as a track - it’s defin­itely a proper road).

Once you’re past the junction and safely onto the SP47 you continue following it through Perticano, before joining the SP360 as it heads for Isola Fossara, crossing over the Marche-Umbria border once again. The landscape gets steadily more mountainous and depending on the time of year you may see snow on the high points. The road changes its desig­nation to the SS360 but otherwise unchanged. The landscape from here on defin­itely feels more mountainous. There’s another great section as you ride towards Scheggia through a dramatic gorge on the edges of the Monte Cucco parco regionale.

As you head for Scheggia look out for the Eremo di Sant’Emiliano and San Bartolomeo. The eremo (hermitage) was also a Benedictine Abbey (inform­ation about guided visits). One of many hermitages you’ll find along the Apennines.

From Scheggia the route continues on to Gubbio. Gubbio is probably best known for its associ­ation with San Francesco (Saint Francis). According to the popular life story the Fioretti di San Francesco, Gubbio had been terrorised by a ferocious wolf. San Francesco went out to meet the wolf and brokered a deal under which, in return for being fed by the people of Gubbio, the wolf agreed to stop its attacks on them and their livestock (see wikipedia for more detail).

Apart from its associ­ations with San Francesco, Gubbio is an atmospheric Umbrian town that’s well worth a visit - and of course offers options for places to stay and to eat. If you have the time you could take the funivia to enjoy the views from the Basilica di Sant’Ubaldo, 300 metres above the city.

Even if you don’t take the lift up the hill it’s worth going up to the Piazza Grande with the fine medieval Palazzo dei Consolari. There’s also a Roman theatre a little way from the city.

At Gubbio you have the option of climbing back up to Scheggia or heading across country to Pietralunga following a section of the Via San Francesco route from bikeinumbria.it (it/en/de/es) . You can of course simply to carry straight on from Scheggia and not go down to Gubbio: there are a few places to stay along the way. 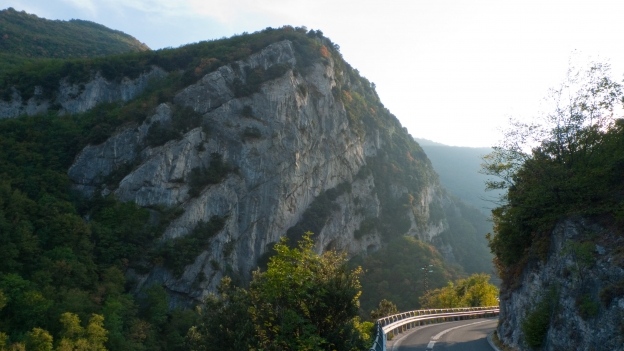 Umbria: Monte Cucco parco regionale on the road to Scheggia

From Scheggia the tour continues, along the SS3 Via Flaminia (follow the sign for Fano) before turning off onto the SS452. When I rode this route, the SS452 was fairly busy, but you are pretty soon off it onto the much quieter road that leads through the Serra di Burano (keep an eye out for the signs S.M. di Burano and S. Bartolomeo). This is a lonely road with some great views over the Umbria hills.

The road through the Serra di Burano comes out onto the SP201. Turn right for Cagli and Piobbico. The road follows the gorge of the river Bosso to the village of Secchiano. Coming out of the village, make a left (signs for Piobbico and Rocca Leonella). - look out for the picnic table and water tap on the corner. The road from here is quiet and very scenic and, at the weekends, you may well see more cyclists than cars. 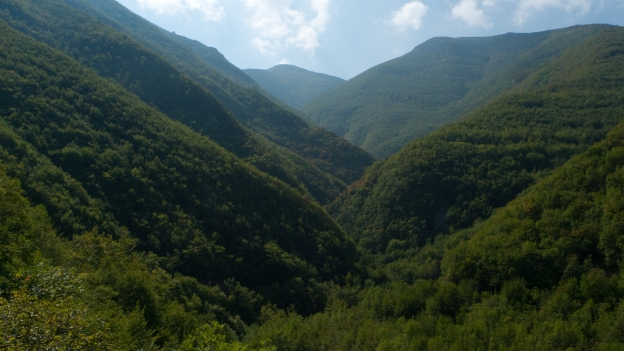 Le Marche: on the road to Piobbico

The road comes out on the main strada statale leading into Piobbico. Look out for the sign on the right-hand side welcoming you to Piobbico Sede Mondiale dei Bruti (World HQ for the Ugly). Piobbico is home to the Club dei Bruti. The motto in the centre of the sign (La bruttezza è na’ virtù - La bellezza è schiavitu) trans­lates as ‘ugliness is a virtue - beauty is slavery’.

There’s an annual ‘Festival of the Ugly’ on the first Sunday of September. There are bars, restaurants and places to stay in the town. 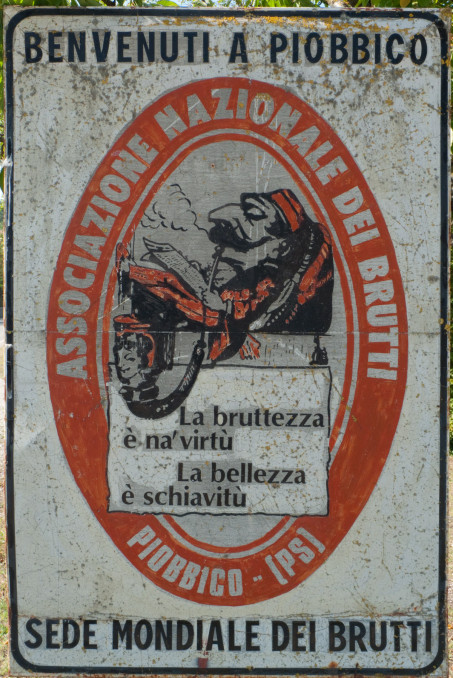 From Piobbico the SP21 takes you to Urbania. There’s a bit of a climb but the road is basically fairly flat.

Urbania is overshadowed by Urbino 16 kilometres up the road, but it’s a nice place to stopover or just have a drink (and maybe try the local speci­ality cristolo, a sort of flat bread) and watch the world go by for a bit. The town seems to be reclaiming its old name of Castel Durante - perhaps in an effort to distin­guish itself from its more famous neighbour. If you have time you could visit the Palazzo Ducale which (for map geeks) has an exhib­ition of globes by the carto­grapher Mercantour. Urbania’s most unusual tourist attraction is the Chiesa dei Morti (Church of the Dead) where 18 mummified bodies discovered in the 19th century are displayed in glass cases. Not for everyone (including me).

From Urbania a glorious stretch of road (the SS73 bis) takes you the 17kms from Urbania to Urbino. It’s cruise along a ridgeline with glorious views of the Le Marche countryside. I highly recommend going to Urbino, but it’s worth the detour just for the ride. So good you won’t mind doing it twice.

The bikeinumbria.it (it/en/de/es) website produced by the regional tourist authority has an excellent route called the Via di San Francesco (Way of Saint Francis). You can pick this up at Gubbio or Pietrasanta (in fact the variant between Gubbio and Pietrasanta follows this route) and follow it to Assisi, Perugia and Spoleto.

UNESCO World Heritage-listed Assisi is only a short distance from Gubbio and is well worth the detour.

When I was in the area I took the Strada Statale 77 from Colfiorito down to Foligno and there was a lot of construction and tunnelling work going on in building the new SS77. The 13 tunnels (with a total length of 40 kms) are now all finished and the new road seems set to open in 2015. When I road the old road it was very scenic but there was a lot of construction traffic. I don’t know the exact route of the new road so I haven’t been able to confirm whether it is completely separate from the old road, but the old road has the potential to be a really good altern­ative for cyclists crossing the Apennines. 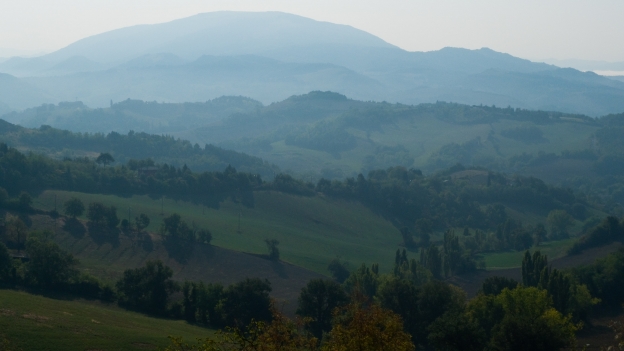 Hotels and other places to stay

There are plenty of options for places to stay in Nocera Umbra, Gubbio, Pietrasanta, Urbania and Urbino. If you want to push on and take a more direct route, there are still some accom­mod­ation options.

The Agriturismo la Ferraia near Cagli has rooms and ristorante

There’s a useful list of hotels and other places to stay in and around Urbania.

The bikeinumbria.it website has a directory of bike-friendly hotels in Umbria.

There are lots of campsites on this section of the route:

On some of the more remote parts of this section there are very few services. You may want to keep these in mind.

The website for the Monte Cucco park (discovermontecucco.it) is in Italian only, but the park’s section on parks.it (it/en/de) will give you a pretty good intro­duction to what it has to offer. 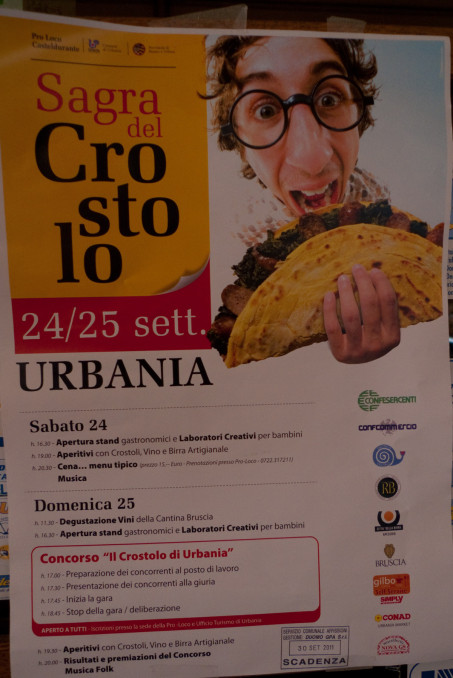