This part of the tour takes you from Urbino to Sansepolcro in Toscana. It passes through the Sasso Simone e Simoncello parco regionale then skirts round the Alpe della Luna with views over the Lago di Montedoglio and the source of the Tevere (Tiber) as it descends from the Passo di Viamaggio. 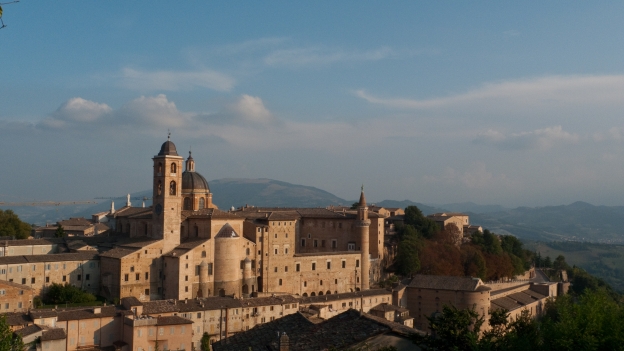 Urbino is listed by UNESCO as a World Heritage site. According to UNESCO:

“ Urbino represents a pinnacle of Renaissance art and archi­tecture, harmo­ni­ously adapted to its physical site and to its medieval precursor in an excep­tional manner. ”

The Palazzo Ducale is the main sight in the city. The Palazzo is well worth a visit in its own right but it also for pictures by the two most famous artists the city produced: Piero della Francesca and Raphael (Raffaello Sanzio. Raphael was born here (his father was court painter) but went on to find make his career elsewhere partic­u­larly in Rome.

The palazzo houses the Museo Nazionale. The star works are della Francesco’s Flagellation of Christ (La Flagellazione), Raphael’s La Muta and the picture by an unknown artist of the Città Ideale (it). Della Francesco’s complex picture generally tends to be called ‘enigmatic’ and the wikipedia article describes some of the attempts to explain the symbolism of the picture.

If you’re intrigued by La Flagellazione, there are other great works by della Francesca in Sansepolcro including The Resurrection, and, at the end of the route, and if you continue on to Arezzo you can see della Francesca’s master­piece the History of the True Cross in the city’s Basilica di San Francesco.

Also don’t miss the studiolo di Federico da Montefeltro with the extraordinary master­pieces of intarsia (a woodworking technique that uses varied shapes, sizes, and species of wood fitted together to create a mosaic-like picture with an illusion of depth) (pictures of the studiolo on wikimedia commons)

This video offers a virtual visit to the studiolo

The First stage is back along the road to Urbania and then taking the SP18 to Carpegna.

When I did this route I made the mistake of bypassing Feltrino, a hilltop village just off the route and hidden away by the trees. This two-minute video will give you an idea of what the place is like (credit: Andrea Spagna:

On from Feltrino is Carpegna and nearby Monte Carpegna. The climb from Carpegna to the top of the mountain was a favourite training climb of Marco Pantani - we’re now in the Romagna bit of Emilia-Romagna. Pantani, in a famous phrase, said:

Carpegna is all I need. From Coppi onward it has been a climb that has had a played a part in the history of cycling, and every so often the giro has passed that way. I’ve lost count of the number of times that I’ve done it while in training. (Il Carpegna mi basta. Da Coppi in poi, è una salita che ha fatto la storia del ciclismo e ogni tanto anche il Giro c’è passato. Io non le conto più le volte che l’ho fatta, allen­andomi).

The climb was included in the 2014 Giro d’Italia. At the top there’s a memorial to the cyclist.

If you fancy the detour, the climb is 6.1 metres long with an altitude gain of 634 metres. The average gradient is a little over 10 per cent (for the first couple of kilometres it’s 13 per cent) altitude profiles for Monte Carpegna.

Monte Carpegna also has a ski station and Carpegna when I visited it in September felt a little like, well a ski-resort out of season, but If you need a bike shop there’s a very good one in the town.

From Carpegna there’s a bit of a climb and then the road descends into the charming village of Pennabilli.

The road then follows the valley of the river Marecchia crossing into the Toscana region and on past the town of Badia Tedalda, and from here, it skirts round the Alpe della Luna riserva naturale regionale, and down to Sansepolcro. On the right, you can see the Lago di Madonnuccia and the Tevere (Tiber) river as it beings its course towards Rome and the sea.

If you need a short cut you could take the road via Sestino to Badia Tedalda.

bikeinumbria.it (it/en/es/de) also offer an excellent route following the Tevere (Tiber) from Sansepolcro across Umbria (bikeinumbria.it: The Tiber River Itinerary). Sadly there’s no official route to take you all the way along the Tevere to Rome, but if you follow the bikein­umbria route you can pick up the Ciclopista del Sole (eurovelo 7) to take you into Rome. You can also join the Ciclopista del Sole by picking up the Sentiero della Bonifica near Arezzo.

I ran out of time when I rode this route. I hope one day to be able to pick up where I left off. If you’re inter­ested in continuing, it looks to me like there’s a potential route from Sansepolcro via Anghiari, Caprese Michelangelo, Chiusi della Verna, Bibbiena, Poppi, Stia, Dicomano, and on to Borgo San Lorenzo in the Mugello above Firenze. (If you do follow this route please do let me know how you get on). 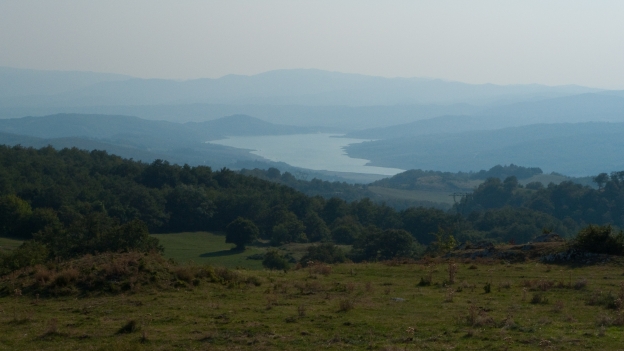 The Lago di Montedoglio near San Sepolcro in Toscana. The lake is the source of the Tevere (Tiber)

Booking.com pages for places on this section of the route: | Frontino | Carpegna | Pennabilli | Sansepolcro | Arezzo

There’s a hostel in Pennabilli: the Ostello Montefeltro.

There’s a train station as Sansepolcro with trains operated by the Regione Umbria. The Umbria Mobilità website says that you need to book bikes three days ahead. In practice the capo di treno may let you travel even if you haven’t booked, but I wouldn’t rely on that. (See Umbria Mobilità: Carta della Mobilità and timetables for the Umbria Regional trains). You may prefer to continue to Arezzo which has a station on the main national network. I went via Anghiari to Arezzo. For some reason I took the SS71 into Arezzo, but there’s a minor road, the Strada Provinciale della Catona that starts at Chiassa and takes you into Arezzo. 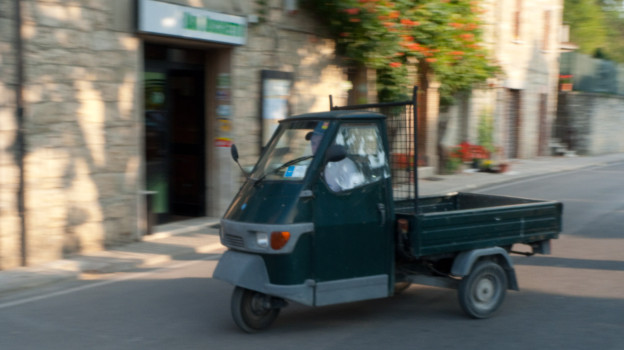 Apecar in a village in the Apennines