This section of the tour takes you into the Valle Stura and on to the Colle delle Maddalena (Col de Vars in French). It follows the peaceful Itinerario Cicloturistico della Valle Stura as far as Vinadio. 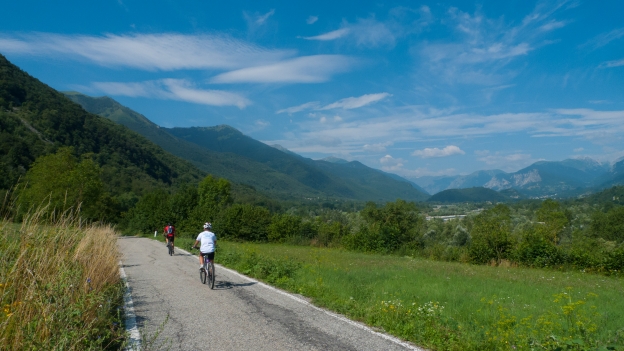 At Vinadio there’s the huge Forte Neghino . It is one of a number of forts, and barracks built in the second half of the 19th century to defend Italy’s land borders. As well as the forts there’s a network of military roads — some are extraordinary feats of engin­eering. The fort at Vinadio (like the others in the area) never saw any military action.

After Vinadio, if you don’t have a mountain bike, you have to take to the main road. There are quite a few of lorries on this stretch of road - although the numbers aren’t huge. I counted about a dozen lorries an hour (both direc­tions). It felt like that there were more lorries heading towards the Colle in the morning and more coming back in the evening. 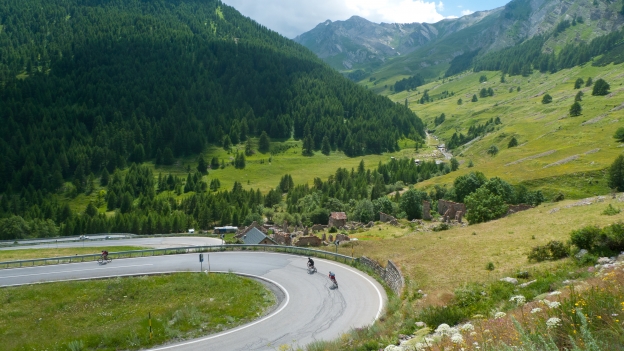 The Valle Stura - the road to the Colle della Maddelena

This climb has a place of honour in the history of Italian cycling. It was here in the 1949 Giro d’Italia that Fausto Coppi broke away and lead the race for 190 kilometres before arriving almost 12 minutes ahead of his rival Gino Bartali. (Bartali had suffered a couple of punctures though). 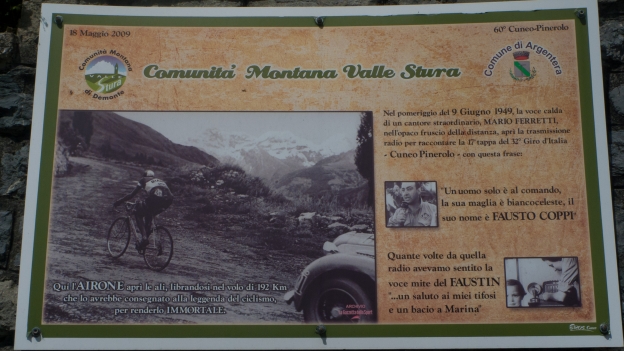 Along the way you’ll see an inform­ation panel commem­or­ating the event. It records how on that afternoon radio commentator Mario Ferretti opened his broadcast with the words:

(A lone man is in command, his shirt is sky blue and white, his name is Fausto Coppi.)

The caption to the picture reads

If you look at the picture you’ll see how rough the mountain roads were (at the time they would have been unsurfaced).

Here’s a short (3:06) video about Fausto Coppi’s legendary victory in the Cuneo Pinerolo stage of the 1949 Giro d’Italia, when Coppi made a solo breakaway over a 254-kilometre stage.

The commentary is in Italian with subtitles in English (click the subtitles button to turn them on). You’ll need to have Flash enabled to see the subtitles, if you don’t have Flash here’s a quick summary:

Before the race the Direttore Sportivo of the Bianchi team had asked Coppi what supplies he should prepare for the gregari. Coppi’s reply was “pane, salami e lanternino” (bread, salami and lights) - meaning that the gregari would have a long day in front of them.

Coppi had stopped to oil his chain when Bartali passed by together with another Tuscan, Primo Volpi. Coppi immedi­ately sets off in pursuit and overhauls them, setting a pace that no one can match. The road to the Colle della Maddelena is a a ‘calvario’ of mud and beaten earth.

A journ­alist from L’Équipe is quoted recounting how accom­panied Coppi to a French village (possibly Barcellonette) and stopped for a meal at a trattoria, had a full meal starting with antipasti and ending with coffee, smoked a cigarette, asked for the bill and paid. Coming out of the trattoria, the rider in sixth position was only just passing.

Coppi finished the stage 11:52 ahead of Bartali. The Giro was his. ”

This is an extract from a longer video. If you want to see the whole thing go to: youtube.com: I Miti del Ciclismo: Fausto Coppi

The road on the French side also has a shortish section that is off-limits to bikes. The section of the road was closed to bikes several years ago on safety grounds after rock falls. If you look on Google Streetview there are a couple of signs and that’s about it, and I saw cyclists coming and going in both directions.

At the top there’s a memorial to Fausto Coppi but otherwise, there’s not much to keep you. Fortunately, there’s a bar and ristorante at the lake a little way before the top.

Coming back you could turn off at Vinadio and follow the Valle Stura cycle route - although you could also opt for the main road as the downhill gradient should give you enough speed to make the lorries easier to deal with.

There’s an inter­esting road that takes you from Demonte (780m) Via the Vallone di Arma to the Colle d’Esischie (2370). As the distance is 24.5 kilometres, the average gradient is fairly gentle. You could then descend the Valle Maira to Demonte or there’s a more challenging climb to the Colle di Sampeyre profile on climbbybike.com. I have included this variant in the maps and gps downloads. 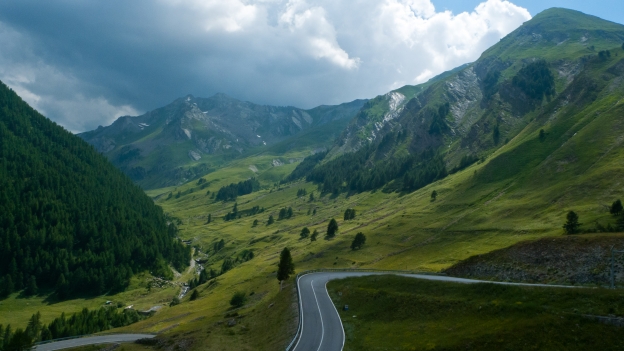 Booking.com pages for places on this section of the route: | Gaiola.

There are two hostels:

I stayed at the Camping Demonte, which had the bonus of a swimming pool. There are also campsites at: 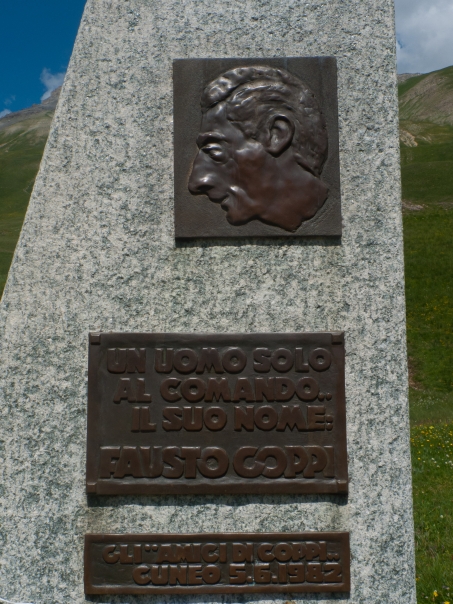