The next section takes you from Paesana to Bobbio Pellice. The Pellice valley is the heartland of the Valdesi - religious dissidents who endured centuries of perse­cution. Not surpris­ingly the area’s history means that it has its own distinctive identity.

From Paesana you head for Barge and a very scenic road with a twisty, turn, fairly steep descent down into Monarello and then on into Barge. From Barge there’s then a section of cycleway on the old railway line Bricherasio-Barge rail line (it.wikipedia.org) that takes you over the Pellice river. The pista ciclabile doesn’t yet go all the way from Barge to Bricherasio - local cyclists are keeping up the pressure for its completion (it.facebook.com: : Pista Ciclabile Bricherasio Barge).

Both Barge and Bricherasio are typical authentic small towns. Bricherasio is a good place to stop for a coffee (or to fill up your water bottle). Look out for the sundial on the church in the main square, and as you go out of town, on the right hand side there’s a Viale di Rimembranza with an avenue of cypress trees and below them a moving memorial to those from the town who died in the first and second world war. 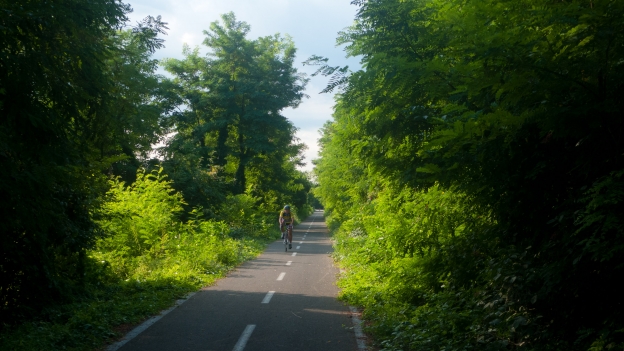 Cyclist on the Bricherasio-Barge cycleway in Piemonte

You can get to Torre Pellice following the main road, but it’s worth taking the time to follow the country lanes through San Giovanni. Look out for the Strade delle Mele signs.

The Valdesi (the Italian name for the Waldensians) are a religious movement that began in Lyon in France around 1170. The Valdesi, or Poor Men of Lyon as they were then known were excom­mu­nicated in 1215, and for centuries after were subject to ferocious perse­cution and attempts to exterm­inate them.

The repression was probably at its most fierce in the second half of the 17th century. The Dukes of Savoia gave the Valdesi the choice of conversion, exile or death. Thousands of the Valdesi were killed or driven into exile with a smaller number ‘The Invincibles’ continuing resistance from the most remote and inaccessible corners of the region.

The worst of the repression ended when the Duke abandoned the alliance with the French king, but a series of laws confined them to an alpine ghetto. The Valdesi were eventually given full civic rights in 1848 - although their religion was still no more than tolerated.

The position of the Valdesi in Piemonte had already caught the imagin­ation of the public in the Netherlands and Britain, who began raising money to build schools and otherwise assist the Valdesi community. One of those inspired to help was the Canadian-born British Army officer Charles Beckwith. As a young officer at the battle of Waterloo had had four horses shot from under him, and lost a leg from his wounds. Il Generale con la gamba di legno (the general with the wooden leg), as he was affec­tion­ately dubbed by the local people made his home in their main town Torre Pellice. He then used his fortune and overseas contacts to help build schools throughout the valleys. They are still referred to as Scuole Beckwith (Beckwith schools). In every town in the area, there’s a Via Beckwith, including the main street of Torre Pellice. There’s even a local radio station Radio Beckwith Evangelista .

Thanks to the Beckwith schools the Valdesi valleys came to have some of the highest literacy rates in the whole of Europe. In the area, there are a couple of the old schools that have been preserved and turned into museums. One at Pramollo and another at Odin-Bertot.

As you come into Torre Pellice head along the Via Beckwith, where there’s the Tempio Valdese the seminary and homes built for the teachers in the seminary.

This area has a long history of resistance which didn’t end with the granting of civil rights. The area was a centre of resistance during the second world war between 1943 and 1945 and the area is dotted with memorials. If you go a little further on up the Via Beckwith you’ll come to a large memorial to the deportees and those who died in the concen­tration camps. Further up the road, there’s a memorial to the German White Rose resistance group as well as to a young woman partisan who died in the last skirmishes of the war in this area.

In the next village up Villar Pellice. There’s a Piazza Willy Jervis. I was naturally intrigued: it’s difficult to imagine a more quint­es­sen­tially English name than Willy Jervis. ‘Willy’ was, in fact, the nickname for Guglielmo Jervis. Born in Napoli the descendant of an English sailor, he settled in Piemonte to work for the engin­eering firm Olivetti. He was vice-president of a local section of the Club Alpino Italiano - and there’s a rifugio nearby named after him. He became a leader of the resistance in the western Alps. He was captured, and shot in this piazza, along with two other partisans. Today you can sit in the sunshine and listen to the water as it flows into the fontanella before heading further on to Bobbio Pellice.

Bobbio Pellice is the most unspoilt of the villages and a nice place to stop either for a meal or for the night (there’s a nice campsite a short way from the village).

The Torre Pellice tourist inform­ation office’s website has a listing of accom­mod­ation options in the area: ufficioturismo.comune.torrepellice.to.it. There’s also a useful accom­mod­ation search facility on the turismotorino.org website (it/en/fr/de/fr/es/ru/cn/jp).

I stayed at the Campeggio La Roccia at Bobbio Pellice. There are a couple of other sites on the way up, but I think it’s worth pushing on to Bobbio Pellice.

If you’re inter­ested in the history of the Valdesi and what to see in the area then the best starting point is probably fondazionevaldese.org (oc/it/fr/en/es/de)

The website for the tourist office in Val Pellice is comune.torrepellice.to.it.