This section goes to Pinerolo before heading up the valley of the Torrent Chisone to Fenestrelle and the Col di Sestrière (and ski resort).

Pinerolo is the main centre of the area, and the traffic in the town can be quite busy and the SS23 to the south of the town is in effect it’s a continu­ation of the motorway and off-limits to bikes. I’ve suggested a route that takes you on a quiet but slightly round­about route into the town. If you’re pushed for time and don’t mind a busy and not very inter­esting road then you can take the SP589 into town.

If you are content to bypass Pinerolo you can take the SP 164 via Capella Moreri and San Secondo di Pinerolo (with the option to stop off at the Castello di Miradolo). The road through Pinerolo itself is fairly busy but gets quieter as you get out of town on the road to Fenestrelle.

The lower part of the valley is surpris­ingly indus­tri­alised with a talc processing plant (the area is a centre for mining talcum powder). There’s also a large engin­eering plant - now part of the Swedish ball bearing manufac­turer SKF. If you’re inter­ested in engin­eering there’s the Museo della Storia della Meccanica e del Cuscinetto (museum of the history of engin­eering and the ball bearing). 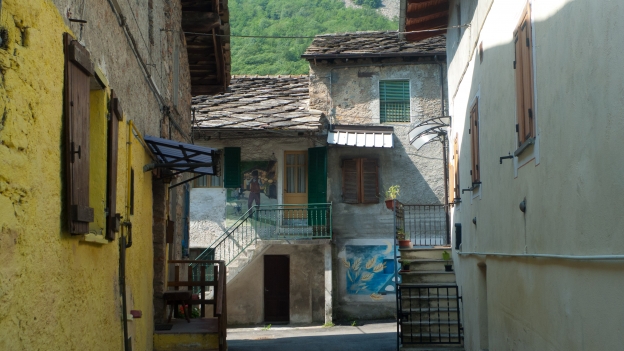 The road to Fenestrelle is a little bit dull, it’s defin­itely worth making a detour or two off the road and into the villages along the way: it was amazing how much difference it made going just a street or two away from the main road. The villages along the road (part of the Comune di Roure), are decorated with murals, each village has its own theme:

Look out for the village church at Castel del Bosco with a huge sundial painted on one side. 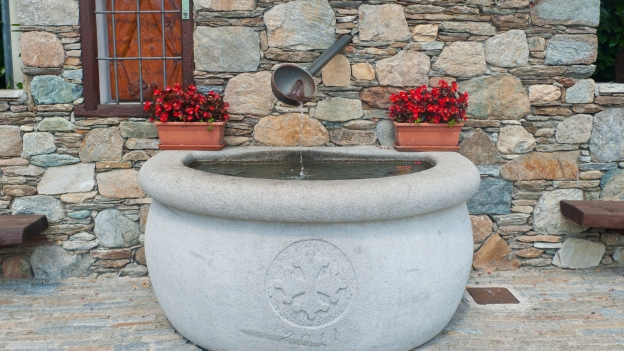 Fontanella (drinking water fountain) at Villaretto on the road to Fenestrelle

In an area that has more than its fair share of military follies, this is the biggest and grandest of the lot.

As with the other forts along the border it never saw military action - it was used as a prison by both the Italians and the French, and its main claim to fame is that it was the prison that held Pierre Picaud whose story was used by Alexander Dumas as the basis for The Count of Monte Cristo.

The ‘fort’ in fact consists of two linked forts. The defensive walls extend for three kilometres and rise from the Forte San Carlo to the Forte delle Valli at (1800m) 600 metres above. There’s a covered stairway with 4000 steps (OK if you’re counting it’s 3996). You won’t be surprised to hear that if you want to visit the whole thing you’ll need to set aside a day, but a couple of shorter options are available.

Bing Aerial view of the Forte di Fenestrelle. Use the controls to zoom in and pan. | View Larger Map

The fort was built in the eight­eenth century and abandoned by the army in 1947, and is now run by an associ­ation whose volun­teers act as guides for the visits. The day I visited it, it rained all day and the fort was wreathed in cloud, but on a good day the views from the top are spectacular. for inform­ation about visits go to fortedifenestrelle.it 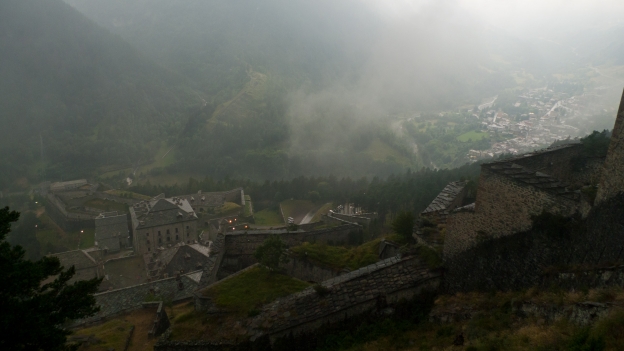 Fenestrelle: the Forte di San Carlo seen from above

From Fenestrelle (1154m) there’s 23 kilometres of scenic road to the ski resort of Sestrière (2035m) and the col de Sestriére. 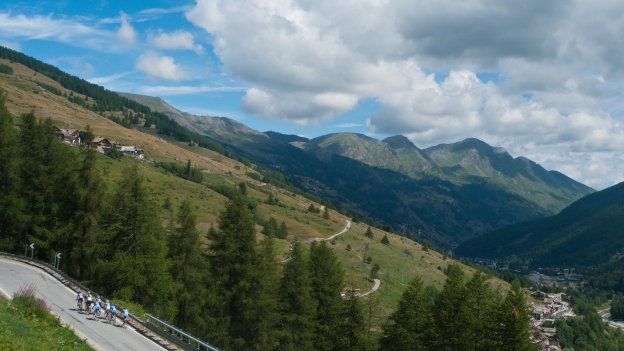 A group of cyclists on the road to Sestrière

On the way it passes through Pragelato. Pragelato has become a satellite resort for Sestrière but preserves the original village centre. Sestrière on the other hand is a purpose-built resort (devel­opment first started in the 1930s). The archi­tecture is very remin­iscent of French purpose-built resorts - no doubt the same developers and archi­tects were building here as in the French resorts.

Don’t get me wrong, as ski resorts go it’s OK, but there’s not much to keep you in Sestrière. There are a couple of restaurants, but unless you are really hungry you might be better hanging on until you get to Cesena Torinese the next real town.

If there’s not much to lift the spirits about Sestrière itself, the descent from Sestrière towards Cesena Torinese is glorious.

At Cesena Torinese you pick up the SS24. A wide fast road but when I rode it, it wasn’t partic­u­larly busy. The SS24 follows the river Dora Riparia into Oulx at the head of the Valle Susa.

As well as the forts in the area the army built a network of military roads. Of particular interest to cyclists is the Strada dell’Assietta an unsur­faced road that runs for 30 kilometres between Dépôt near Fenestrelle and Sestrière via the Colle dell’Assietta. Most of those 30 kilometres are above 2000m in altitude offering some spectacular panoramic views. Another branch of the road takes you to the Colle delle Finestre and then descends to Salbertrand. The road is open between mid-June and the end of October. It is closed to motorised traffic on certain days (in 2014 it was closed on most Wednesdays and Sundays in July and August). 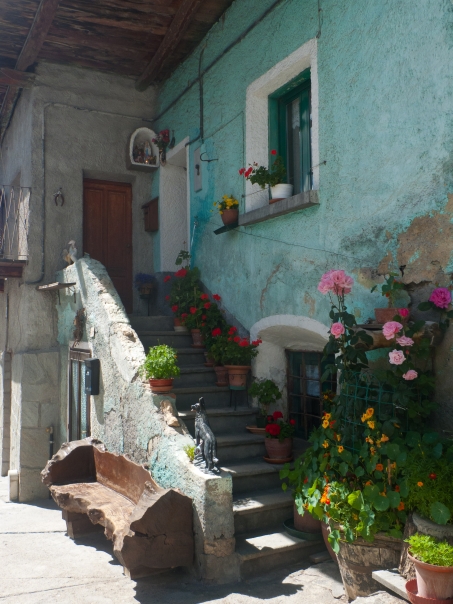 There’s a compre­hensive accom­mod­ation listing on altavalchisone.it (click Riccevittà on the menu on the home page) - you can also download a very useful list of hotels and places to eat   from the site’s altavalchisone.it: downloads page.

I stayed at the Campeggio Serre Marie (Warning: website uses Flash) just outside Fenestrelle. Other sites in the area are:

The best site for general tourist inform­ation is turismotorino.org

The local authority for the Alta Val Chisone has a useful website: altavalchisone.it

for inform­ation specifically about Sestrière there’s consestriere.it the website of the Consorzio Turistico. 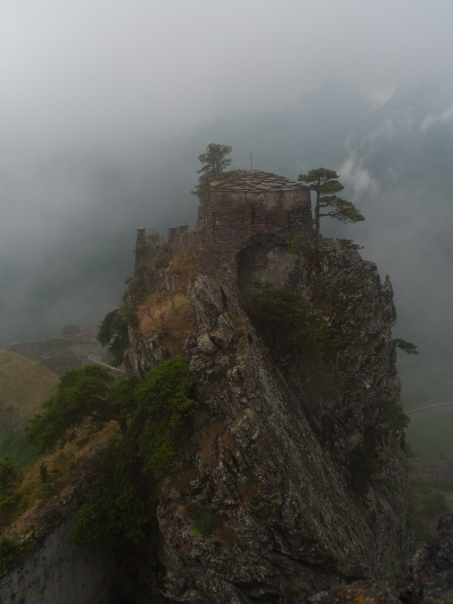