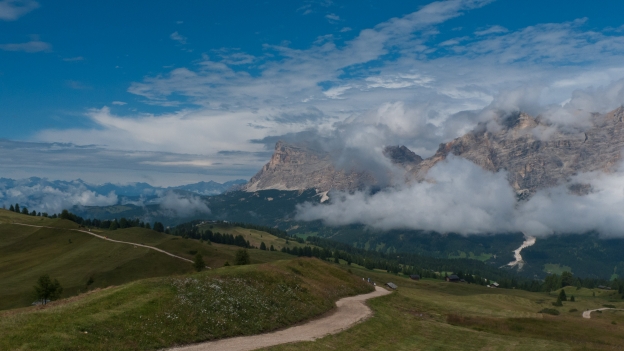 The Sella Ronda MTB, as you’ve probably already guessed, is the MTB version of the road circuit. (If you’re inter­ested in the road version then see this article: The Sella Ronda).

It’s an absolute cracker, and a truly memorable ride.

The route is 60 kilometres (but this includes the distance covered by lifts) with 4380 metres of descent and 8 lift rides leaving a measly 750 metres climbing. It’s rated as 4* for technical downhills and 3* for endurance. When they say 4* for technical downhills they aren’t kidding, there are some tricky sections. It sounds fairly straight­forward on paper, but don’t under­es­timate it, especially, if, like me, your technical skills aren’t up to much.

It’s very well way-marked, and you could do it on your own, but the option of a guided tour is available (see box) and I think is defin­itely worth considering.

The Val di Fassa tourist promotion people have produced a short (2:33) video that gives a very good idea of what to expect (it looks better in the overlay).

My favourite part was the section from the I Tabla mountain restaurant above Corvara which runs along a ridge towards Pralongia with well-surfaced paths and some beautiful views before descending through the woods to the Passo Campolongo. There’s also a lovely section descending towards Corvara. When I did it there were lots of walkers around, but out of the high season this could be a nice cruisey stretch.

There are spectacular views at a number of points put the view over the Marmolada glacier and the Lago di Fedaia from the top of the Porta Vescovo cable car is outstanding. 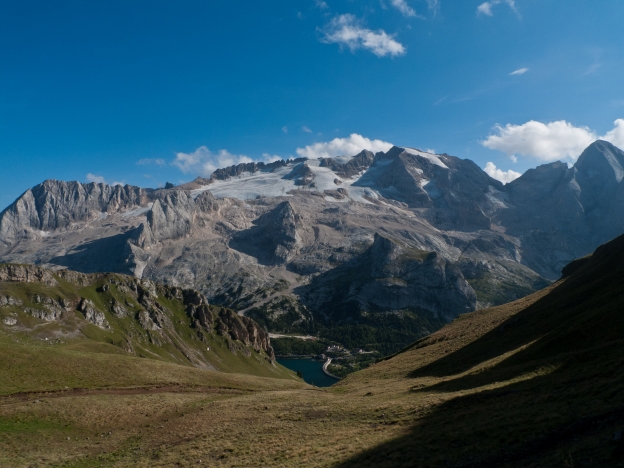 You can do the Sella Ronda MTB as part of a guided tour, for inform­ation on MTB guides see sellaronda-mtb.com: Info.

It is a pretty big day: very good riders on a good day out of high season should be able to do the whole thing without too much trouble - but bear in mind that most of the descents are pretty tricky and there are few places where you can really go fast (especially at busy times with lots of walkers). So it’s worth­while keeping in mind bailout options if you need to make up time.

The lifts are open between 8.30 (-ish) and 17:00 or 17.30. I did see one lift running after that time but that may have only been to bring people down from the mountain. The map/flyer for the route says that the lifts close for lunch between 12.15 and 14:00 this seems to be only true for some lifts - the lifts above Corvara for example run all day. Lifts may also close due to bad weather. When I did the circuit (in mid-August) one chairlift had to close due to high winds;

There are some sections where the road is a feasible bailout option if the lifts are closed or you need to make up time, while in others going by road would involve a fairly big climb. This is something to bear in mind, partic­u­larly if you are starting from Colfosco/Corvara where you have the risk of a big climb up from Val Gardena at the end of the day - so you defin­itely need to keep an eye on the lunchtime closure times for the lifts out of Campitello di Fassa. 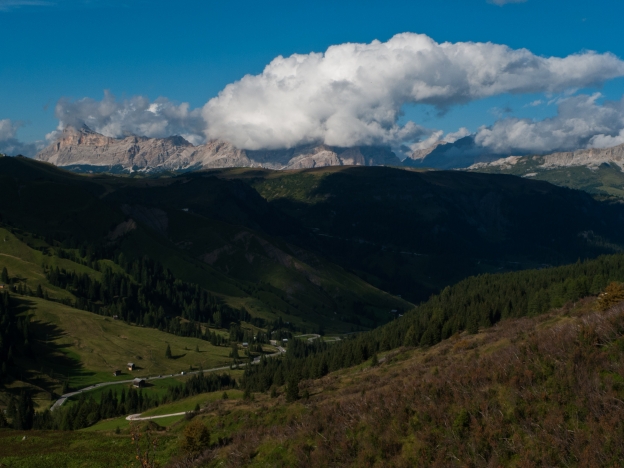 Sella Ronda: the road to the Passo Pordoi

There are two routes: clockwise and anti-clockwise. The clockwise route is way-marked. There are feeder routes from La Villa and from San Cassiano/San Kassian.

When I wrote this article the anti-clockwise route wasn’t waymarked but that may well have changed. It is shown on the Kompass Gruppo Sella map and may be shown on the more detailed 25K Tabacco maps. Bear in mind that the route is subject to change.

When I first wrote this article in 2012 there was very little inform­ation in English about the route. Now there is loads. There’s a dedicated website: Sella Ronda MTB track tour (sellaronda-mtb.com) (de/it/en).

Once you’ve worked out how the site works it’s very logical, but initially it left me scratching my head. It offers two guides with inform­ation on the route depending on whether you are going clockwise or anti-clockwise these include important inform­ation about lift opening times:

There are also pages that give inform­ation about things like companies offering guided tours. These depend on your starting point:

You then need to scroll right down to the bottom of the page to the ‘useful inform­ation’ section which lists companies offering bike rental and guided tours. (Note: the pages look the same, but the listings are different). You can also download a pdf version of the guide leaflets with a pretty decent looking map which I assume is available from the tourist offices. There are four different versions - the maps are the same, but the additional inform­ation is tailored to the local area. 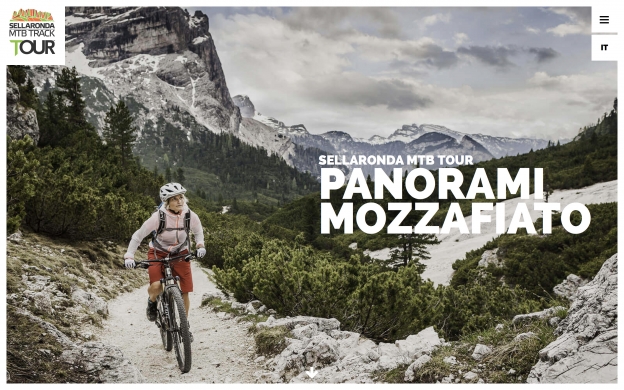 In addition to the dedicated site the tourist promotion websites for individual areas on the Sella Ronda have useful cycling sections:

And just for the sake of completeness (and in case and of those links get broken) here are the links to the home pages of the tourist office websites: 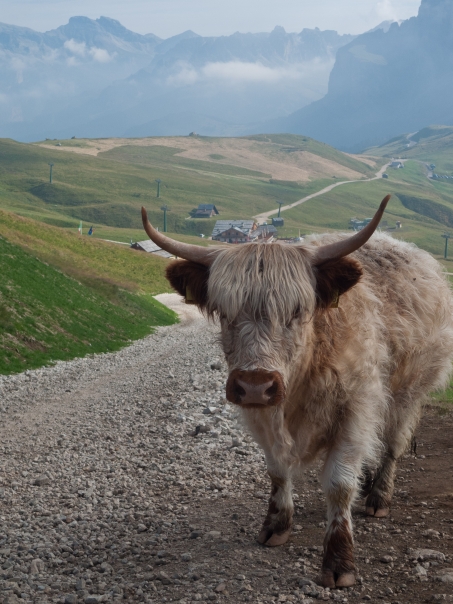