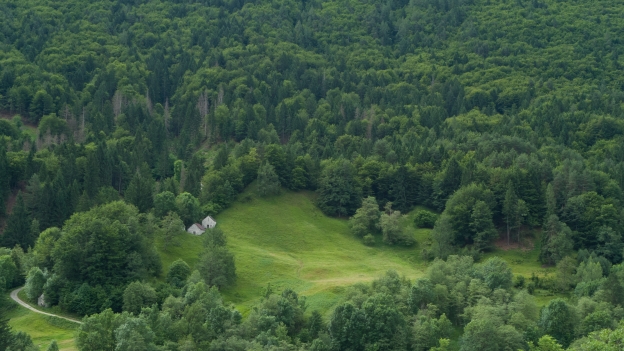 This circular tour takes you from the shores of the Lago Maggiore through the Val Cannobino to Mergozzo and Santa Maria Maggiore in the Val Vergozzo. It then descends to Ascona and Locarno following the course of the Cento Valli (Hundred Valleys) scenic railway. If you have the energy you can make a detour in search of the ‘lost clan’ of Gurro.

It’s a very scenic ride, and there’s plenty see along the way.

The ride itself is pretty straight­forward: a long climb up to Santa Maria Maggiore and then a long downhill into Ascona/Locarno and back along the lake shore. You could do it in the reverse direction or start at Ascona.

Resistance and the Repubblica Partigiana dell’Ossola

The road skirts the Val Grande national park Italy’s largest wild space. After 1943 this wilderness became a refuge and stronghold for partisans and those escaping being drafted into the army or forced labour.

The occupying forces and soldiers of the Mussolini government, launched a rastrel­la­mento (literally a raking) here in June 1944. The parti­giani were unable to withstand a concen­trated attack by a larger and better-armed force and of the 450 partisans active in the area 300 are thought to have died. Hundreds of barns and cowsheds were set on fire.

You may be tempted to climb the steep and wild road to Gurro. The legend is that a group of Scottish soldiers who’d been fighting on the losing side in the battle of Pavia (February 1525) came through this valley returning home, but, probably found the mountain passes blocked, and settled in the area.

The evidence for the story is a bit slender : the dialect here is different from the dialect spoken elsewhere in the area with some 800 celtic words. But there were lots of Celts in this part of Europe so these words could have come from ancient celtic settlers, and in any event the Scots probably wouldn’t have been Gaelic speakers (but spoken the Scots language).

The main piece of evidence is the existence of certain names for groups of families living in particular areas: names such as Steven, Linnett, and Tennant could only really have come from Scotland.

There’s a bar called the Circolo Scozzese and the signs for the museum have the cross of St Andrew, but you’ll find no other signs of Scottishness. But it’s a good excuse to invite up the City of Rome Pipe Band every now and again.

The village itself is inter­esting in that you can still see older women dressed in the tradi­tional clothing and wearing tradi­tional headscarves.

As well as being a charming place that’s well worth a quick stop, Malesco was the birth­place of Giovanni Maria Salati who, it’s claimed, was the first man to swim the channel. Salati worked as a contra­ban­diero smuggling goods between Italy and Switzerland. He volun­teered to serve with the Napoleonic army. Captured by the British, at the battle of Waterloo, he was imprisoned on one of the prison ships moored off the English coast at Dover. In 1817, still imprisoned two years after the final defeat of Napoleon, he took the oppor­tunity of a stormy night in August to leap into the sea and make his escape. He made it, the story goes, to Boulogne - where he promptly tried to volunteer for Napoleon’s Grande Armée. Thwarted in his effort to rejoin the army, he went onto to set up a chimney sweeping business in Paris and lived to the grand old age of 83.

He is recog­nised by the Italian swimming feder­ation as the founder of open water swimming. The Channel Swimming Association will not of course have anything to do with the Italian claim, maintaining that the Englishman Captain Matthew Webb was the first person to make the crossing.

Santa Maria Maggiore is well worth the visit for its centre - especially the main piazza with its frescoed municipio.

The valley is also called the Valle dei Pittori (Valley of the Painters) because of a school of painters from the area. You can see some of their work at the Scuola di Belle Arti Rossetti Valentini. The town also has a museum dedicated to the spazza­camino (chimney sweep). In the past poverty forced many people to take to the road as itinerant artisans. Towns and villages often have their own particular speci­ality and for Santa Maria Maggiore the speci­ality was sweeping chimneys.

I took the road all the way into Ascona. However, at Tegna you can also pick up a cycle path that takes you into Locarno. The altern­ative route is included with the gps download).

In Ascona there’s a road tunnel that provides a bypass for traffic going to and from the lakeside road - bikes are banned from the tunnel but it’s pretty easy to avoid it.

If you fancy exploring the Val Vigezzo, there’s a network of cycleways and cycle routes described in the Vigezzo in Bici map - go to this page for more inform­ation and download links. this area looks like it might be well worth a day or two’s stay.

The route connects with the Swiss national cycle network route 31 Valle Maggia which runs between Bellinzona, Locarno and Bignasco. 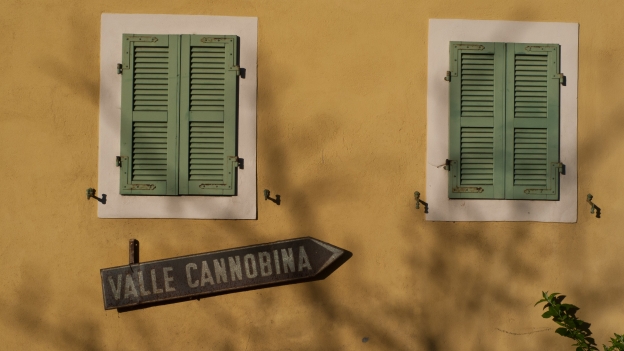