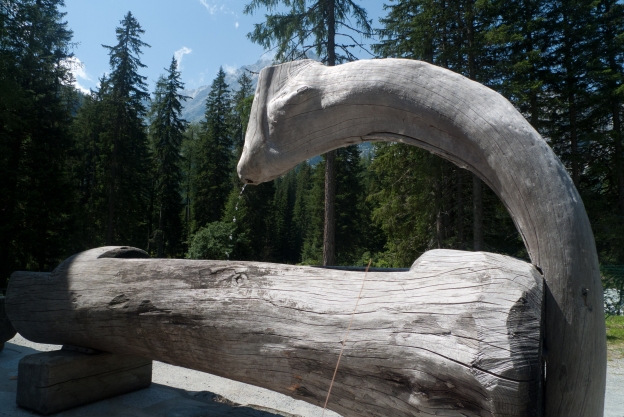 Someone did ask me recently whether the water in Roma was safe to drink: of course it is. Indeed, if you do find yourself in Roma look out for the nasone (big noses) the water fountains on many streets. Drinking from a nasone is defin­itely on the list of things to do at least once when you’re in Roma.

On the road you’ll find lots of fontanelle. These are very much an Italian insti­tution. And there’s no doubt that there’s something special about drinking from a water fountain in the mountains. Water-quality from the fountains is checked by the public health author­ities so these are pretty safe (but look for warning signs: aqua non potabile means ‘don’t drink it’, you might, come across but other signs can indicate that the water is not checked - so it might be OK or it might not. In my exper­ience these are pretty rare.

Despite the fact that water quality is generally good, Italians drink a lot of the bottled water. Now don’t get me wrong, I do enjoy a bit of sparkling water with a meal, but if you visit a mountain area and see the two-trailer jugger­nauts hauling bottled water around then yes, you start to question the sanity of the bottled water industry.

In an effort to lure Italians away from their bottled water habit, some forward-looking local author­ities have started to install water fountains that offer chilled purified drinking water with a choice of sparkling or still. The theory is that the water fountain will pay for itself by encour­aging people to reuse their bottles - so saving the comune money that it would have to pay to have them taken away. Some restaurants have started to install machines but in general these are few and far between.

You can always ask for tap water - just ask for a brocca (jug) or caraffa, di acqua del rubinetto.

These are best bought from super­markets, as bars will usually charge double for them. You can also get powdered energy drinks from some super­markets - signi­fic­antly cheaper than the products from bike shops (with very similar ingredients so far as I can see) and with a lot less packaging.

Most restaurants serve a house wine that is a local vino della zona. I can’t think of an area of Italy that don“t have vineyards close to hand and the house wine is usually fine. It is generally sold by the litre (8 glasses), half litre (four) or quarto litre (quarto or quartino). The bad news for single travellers is that very few places have half bottles or serve wine (other than the house wine) by the glass.

I’ve not often seen rosato (rosé) as an option for house wine.

The two main types of sparkling wine in Italy are prosecco from the north-east (the best is said to come from the Valdobbiadene in the Veneto) and its main rival Asti Spumante from Asti in Piemonte. is the other type of Italian sparkling wine.

Disconcertingly if you are used to thinking of sparkling wine as invariably white wine, there are also red sparkling wines - the best-known is Lambrusco a group of sparkling red wines grown, and drunk, in Emilia-Romagna and parts of Lombardia.

In many areas you might also find an enoteca - a wine bar. It usually means that you’ll have a bigger choice of wines than in a normal bar. If you don’t know want to to order ask quale mi consiglierebbe? (which would you advise?). If you’re looking for a white wine you might be offered a choice between a vino secco (dry wine) or aromatico which as the name suggests should be more, erm, aromatic. 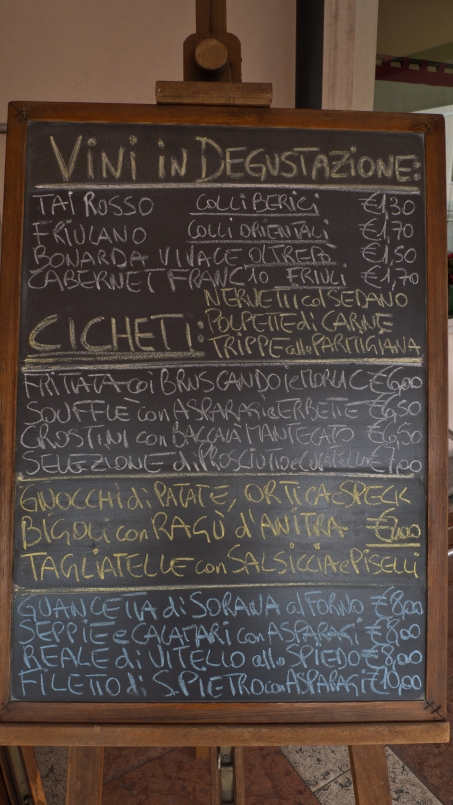 Menu board from a bar in the Veneto

Possibly the most common aperitivo in Italy is a spritz with Aperol. This is made with prosecco, soda or sparkling water, plus Aperol and a slice of orange. Aperol is not something you would want to drink on its own, but in combin­ation with the prosecco it works well. The name seems to vary depending on where you are - sometimes it’s a aperol spritz sometimes simply a spritz. You can of course also get a spritz on its own (ie just prosecco and sparkling water) or with campari.

The best known sweet wine is Moscato but there are others including vino santo in Toscana and Umbria (to be drunk with cantucce biscuits after dinner as an altern­ative to a dolce) and Zebbibo from Sicily.

Most italian beer is the lager type: eg Peroni, Nastro Azzuro with lots of other imported beers. You can also find darker beers (Peroni rosso). Look out for birra artigi­anale - beer brewed in small local breweries. In the north you’ll find beers imported from Germany and Austria (occasionally Belgium) - including weissbier and schwar­zbier (‘black beer’ ie like stout). You can find Guinness in lots of places in Italy. Strongbow cider is becoming more available - strangely no one in Italy seems to make cider, even in the areas where they grow loads of apples .

A draught beer is una birra alla spina. They come in three sizes piccola, media and grande. Sizes can vary but in general expect to get a 20cl glass if you ask for a birra piccola, while a media is 40cl (0.7 pints) and a grande is about a pint.

Whisky seems to be popular in Italy and you can get decent malt whiskies - although expect to pay. Other imported spirits like cognac or armagnac are less common. The most common local spirit is grappa - the name comes from the region of the Monte Grappa and the most famous distillery is the Nardelli distillery in Bassano del Grappa, but it is distilled all over Italy. There are three types of grappa - grappa bianco or giovane (young) is the clear stuff that is often (but not neces­sarily) the fiercest. Then there is grappa invec­chiata which has been aged in barrels (also called imbar­ricata), which is is generally mellower. Then there is grappa morbida (literally “soft”) which is both mellower and sweeter.

Not surpris­ingly as you get further north grappa starts to give way to schnapps - often flavoured, or sweetened with honey.

Limoncello is a liqueur made with lemons (you probably already guessed that). It can be home-made (often the best stuff is home made). Sweet and it’s easy to drink too much of it. There are lots of other liqueurs - generally referred to as amari (bitter). These are a bit of a closed book to me as they almost invariably taste, to me, like cough mixture.

A granita is made with fruit juice (originally lemon juice) that is frozen and then crushed. The texture is more granular than a sorbet. It’s served with a spoon and a straw so you eat it and as the ice melts, drink it. In the UK these are marketed as slushies or slush-puppies and marketed as something for kids, but in Italy they are defin­itely for adults as well - with flavours such as kiwi fruit, or mint.

In some parts of Italy bars put offer an early-evening buffet. You pay say 6 or 7 euros and have the run of the buffet - don’t expect anything fancy. This custom seems most common in cities like Bologna. If you go into a bar with a buffet and you don’t want to eat then it’s best to make this clear at the outset.

Other bars offer crisps and nibbles as a way to attract customers. These are included in the price of the drink.

In the Veneto you may also come across a cicchet­teria which is kind of a combin­ation of a tapas bar and brasserie. Another name you might see is a stuzzicheria.