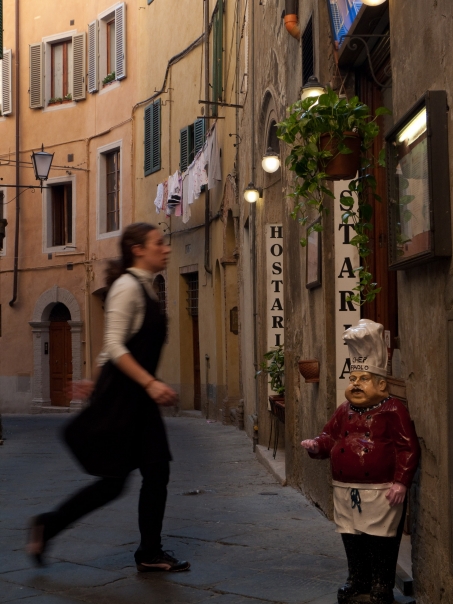 Outside a restaurant in Siena (Toscana)

The menu is divided into antipasto, primo piatto and secondo piatto.

There’s nothing to stop you ordering just one, or all three or an antipasto and a primo etc.

One potential diffi­culty (at least for me) is that a primo on its own isn’t enough, but a primo plus a secondo can be too much. And sometimes the primo is a meal in itself. If you’re not sure there’s nothing to stop you ordering a primo and then seeing how big it is when it arrives, or if you still feel hungry when you’ve eaten it.

Of course ordering a pizza is another way to get round the problem.

If you are travelling with other people there’s nothing to stop you sharing dishes especially antipasti and contorni (side dishes) - you can order two plates.

Some restaurants offer a selection of antipasti - this might be called antipasti della casa, selezione da degust­azione or something similar. This is a great way to try a bit of everything - but it can often be a meal in itself. A bargain, but maybe wait to see how much you get before ordering another dish.

Vegetables are usually served separ­ately as a contorno. Some Italians will eat the secondo of meat without any contorno, while others will eat the contorno as a separate course and others alternate between the two.

Some restaurants offer a menu fisso (or menu di lavoro or menu operaio) especially at lunch­times. This usually means that you get to choose from a limited set of options (sometimes one option) for a fixed price. If you are a tourist, you may find that you are simply offered the normal menu- if you want the fixed-price menu you may need to ask.

The problem for travellers (or at least for me) is that the waiter will usually tell you what the options are and by the time you’ve registered the last option, you’ve forgotten the first one. One option might be to get out a piece of paper and write them down.

If you go into a restaurant you will generally find the table set with a knife and two forks. 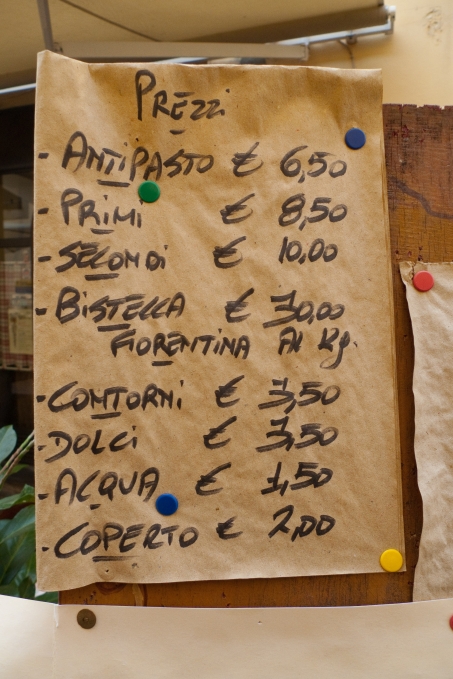 You can generally expect to pay between 5 and 8 euros for an antipasto (or between 10 and 12 if you order a selection). For a primo between 6 and 8. For a secondo between 10 and 12 euros - although something like sausages will be less and a steak about 14. Posher places, and places in tourist areas may well charge more. A dolce will be about 4 or 5 euros.

A quarto (quarter litre - a couple of glasses) of house wine will be about 3 euros. A glass (calice or bicchiere) of better wine will be the same or even a bit more. A bottle of inexpensive wine about 10 euros or so - sadly very few restaurants offer half bottles.

Expect to pay 20ish euros for a dinner/lunch with a couple of courses. 30ish if you go for a secondo.

The general practice in Italy is to charge a couple of euros or so for a cover charge - coperto e pane. This is a service charge and generally people don’t tip (although you may well round up the price - or occasionally the restaurant will round it down).