Most of Italy’s airports have a train station within reach either by taxi or by bike, but a few have their own dedicated rail links, which offer an easier option, especially if you are looking to make an onward train journey. These are

The airport train service is called the Malpensa Express. Trains run between the airport and either Milano Cadorna or Milano Centrale station: so far as I can see from the trenitalia.com website, you can’t take bikes on the trains that run from and to Milano’s Cadorna station, but you can take them on the trains that go to and from the Milano Centrale station. Please check for yourself though (see my article: using the trenitalia website to search for bike-friendly trains). 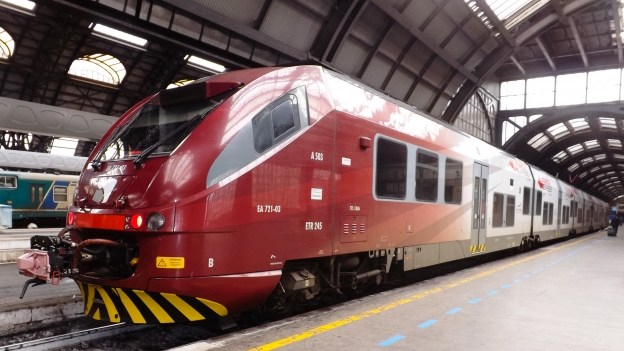 There are two train services between Fiumicino airport and the centre of Rome: the FL1 and the Leonardo Express.

You can take a bike on the FL1 regional train service which stops at Tiburtina and Trastevere station - of the two Trastevere is probably the better option if you have a bike with you (route map for the FL1 service ). A single ticket is 8 euros (plus you’ll need a ticket for your bike). Unfortunately, the FL1 doesn’t stop at Termini, the main rail hub, so if you are looking to take an onward train service then you may well need to change at Trastevere and get a train into Termini (although from Trastevere it’s an easy cycle through Rome’s centro storico to Termini station).

If you have your bike in a bag then the Frecciarossa trains offer fast connec­tions north to Firenze and beyond or south to Napoli - or Lecce on the heel of the Italian boot.

If you are travelling with an undis­mantled bike then you can ride the short distance to the station at Maccarese-Fregene and from there get a train to Civitavecchia where you can change trains for Pisa and other destin­a­tions in Toscana.

Travelling south is a little more tricky as most of the useful trains go from Termini. You best bet is probably to take the FL1 to Trastevere and change trains for Termini - or cycle across town.

If you want to go west for Abruzzo then you can stay on the airport train to Roma Tiburtina. The trains for Pescara go from the Piazzale Est (also look out for signs for the Circonvallazione Tiburtina . If you have a bike the easiest way to get from one platform to the other is to use the station under­passes - however the station’s has been redesigned to route people up the escal­ators to a first floor station concourse and then down another set of escal­ators. You may need to ask one of the security guards at the barriers to let you through.

The train service to and from the airport is operated by Gruppo Torinese Trasporti(GTT). According to the GTT website ([gtt.to.it/ferrovie/faq: bici](http://www.gtt.to.it/cms/linee-e-orari/provincia-e-piemonte/sfm/35-faq#bici1 “gtt.to.it/ferrovie/faq: bici”>gtt.to.it/ferrovie/faq: bici) their trains can carry up to two bikes in each carriage. However, there’s slightly contra­dictory inform­ation from the website of the SFM Torino who are responsible for the metro and rail system in the area, which say that ‘a good part’ of the trains serving the airport are equipped for carrying bikes. Unfortunately, the   timetable doesn’t say anything about bikes so if you want to double-check then you’ll need to phone customer services on 011 216 5352. Groups of more than two are also asked to contact that number.

A bike ticket from Torino to the airport costs 2.70€.

The trains to the airport go from the Porta Dora station. If you’re planning to get an onward train you’ll need to cycle to either the Torino Porta Nuova station or the Porta Susa station. There’s a cycleway that leads along the Dora Riparia river and from there you can pick up another cycleway across town to the station. There’s no integ­rated bike ticket so if you are planning on taking an onward train from Torino then you’ll need to get a second bike ticket (3.5€).

The newly-constructed line to Bari airport offers air travellers excellent onward connec­tions either via the Ferrovie Appulo Lucane (FAL) lines to Matera and Basilicata, the FSE services to the rest of Puglia, or the trenitalia services to further afield.

There are a couple of infopoints one at (Bari Centrale station and the other at the airport) with ticket machines. You can buy a single ticket for travel on both the airport service and connecting FAL services.

The Trinacria Express connects Palermo with the airport’s Punta Raisi station (the Trinacria is Sicilia three-legged symbol). A single tickets costs €5.80; trains run about every 30 minutes and the journey takes a little under an hour (timetable download   or check palermoweb.com: metropa). 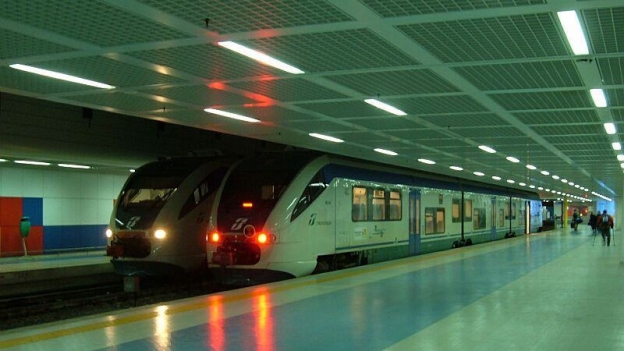