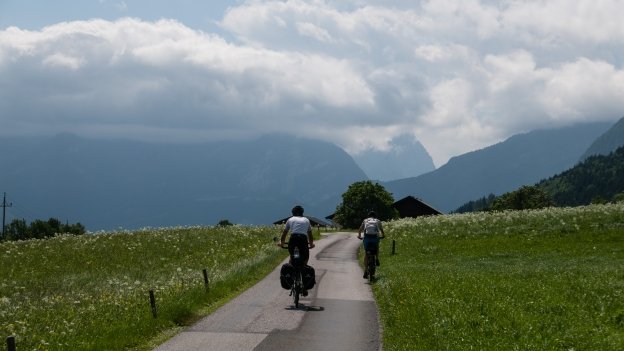 Easy, although there are a couple of short climbs.

Mixed. A signi­ficant proportion of the route is on bike paths with a compacted aggregate surface.

The route is well signposted.

There are cycleways on both sides of the river coming out of Salzburg and for much of the way to Hallein.

At Salzburg the route connects with the Mozart Radweg.

This section of the route is part of the Tauern Radweg. 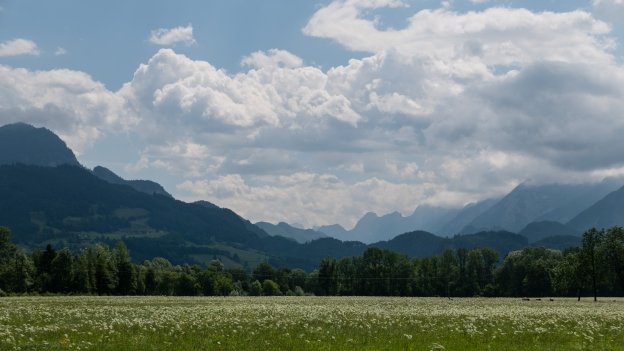 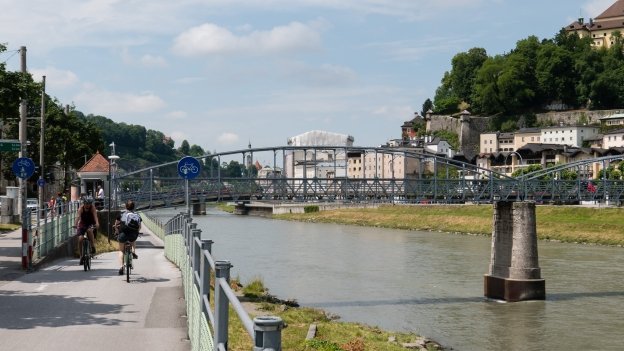 The riverside cycleway that leads out of Salzburg

Coming out of Salzburg the route (signed as the Tauernradweg) follows the river. There are cycleways on both banks.

A little over 4 kilometres out from the centre there is a turning where you can follow a signed route to the Schloss Hellbrunn.

Shortly after that, the tarmac surface gives way to compacted aggregate. This is very smooth and easy rolling. It continues to the Urstein dam (kraftwerk, the route goes under the autobahn, and then crosses over a bridge before continuing along the main Salzach, following the signs for Hallein.

The route brings you into Hallein. It’s worth spending a few minutes just riding around the its pretty altstadt (historic centre).

From the centre, it’s back to the riverside and out of town, following the Tauernradweg signs for Kuchl. As you come out of town you need to bear right on to Gamper Straße Sud – the sign is easy to miss. The section to Kuchl is on a beautiful and incredibly quiet country road that runs partly through meadows and partly through shady woodland.

From here you continue on a quiet road to Golling. Before you get to Golling itself, you can turn off the route to visit the Gollinger Wasserfall. The road to the entrance goes past the Landgasthof Torrenerhof hotel and campsite. Look out for the church of Sankt Nikolaus on a spike of rock just opposite the entrance to the ravine with the waterfall.

Admission to the falls costs 3 euros for adults. They are open from 1 May to 31 October. There are two falls with a combined height of 75 metres. Check prices and opening times on the Golling tourist inform­ation website: golling.info: Golling Falls. 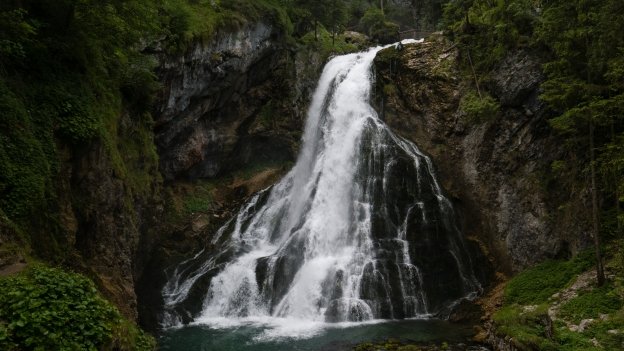 The lower part of the Gollinger Wasserfall

Look out for the Burg Golling on the height above you as you cross the bridge into the Golling.

The signs as you come into the village are confusing: just you just before you get to the level crossing you need to turn right, following signs for the Pass Lueg. However, if you want to visit Golling itself, continue over the level crossing then turn right, and then left by the SPAR super­market following the signs for Marktplatz. The main street of the town is very pretty and well worth a quick look, and of course, it’s a good place to get a cup of coffee or something to eat. 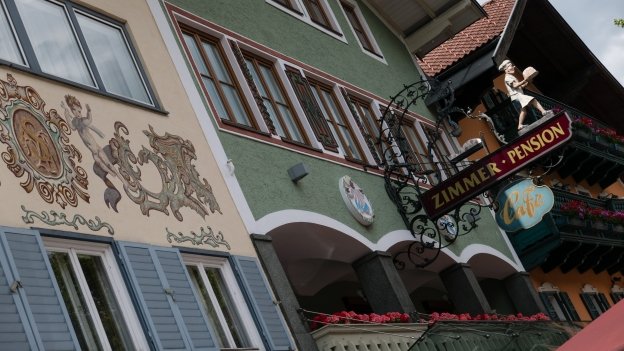 Coming out of Golling the route crosses over the autobahn and the rail line, before coming out onto the B159 Road where you turn right. According to the signs, the Pass Lueg is 1 .9 kilometres away, and Werfen is 15.5 kilometres. There is a short stretch of about a hundred metres where you have to follow the shoulder of the road before you can pick up a cycleway which runs along the right-hand side of the road.

At the Pass Lueg (522m) there’s a short tunnel (133 metres long). You can avoid the tunnel by crossing the road and making the short climb on the road to the left of the tunnel which climbs above it to the original Pass Lueg. At the old pass there is a gasthof and a baroque chapel. Unfortunately, the roadside cycleway then stops abruptly a couple of hundred metres or so later. And, if you are travelling south­wards, you have to cross back over the road. 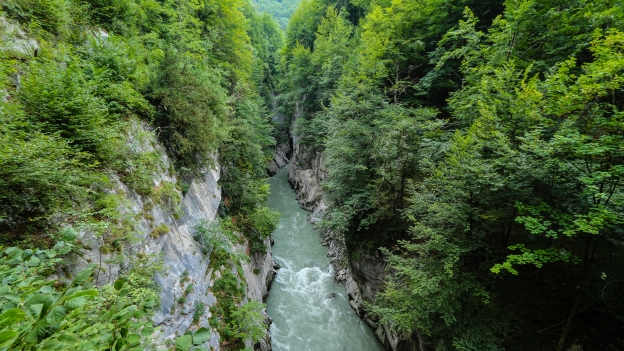 The Salzachöfen near Golling. Photo by Hubert Laska CC BY-SA 4.0 via Wikimedia Commons

The bad news is that a little way on from the old Pass Lueg, you have to join the main B159. You continue on the B159 for 12 kilometres until Werfen where you can turn off to go through the Markt main street in Werfen. The road runs through the narrow gap created by the Salzach river between the Tennengebirge (Tennen Mountains) to the east and the Berchtesgadener Alpen to the west. At points, it is a very narrow gap which both the railway line and the road have to squeeze through. The traffic isn’t heavy (most through traffic takes the autobahn which runs in a tunnel) but it is fast-moving, and there’s no cycleway or cycle lane, although for the last seven kilometres into Werfen there is a reasonable shoulder so you can continue with at least some peace of mind as the traffic whizzes past. As you get closer to Werfen, this turns into a cycle lane - although I couldn’t see anything equivalent on the north­bound side of the road.

For me, this was the least enjoyable part of the whole Ciclovia Alpe Adria Radweg. I would advise seriously consid­ering taking the train between Golling-Abtenau station and Werfen. There are two trains an hour, and the journey takes about 15 minutes. If you want to visit the Salzachöfen, you can always ride there and then double back to the station.

The Lammertal alternative (the Bartlett Variant)

There is an altern­ative: you can avoid the main road by turning off the main route at Golling and following the Lammer river (and the Lammer Radweg cycleway) into the Lammertal. The altern­ative involves a bit of a detour, but only a modest amount of climbing, and looks like the more enjoyable option (thanks to Stephanie and Andy Bartlett who suggested this option). 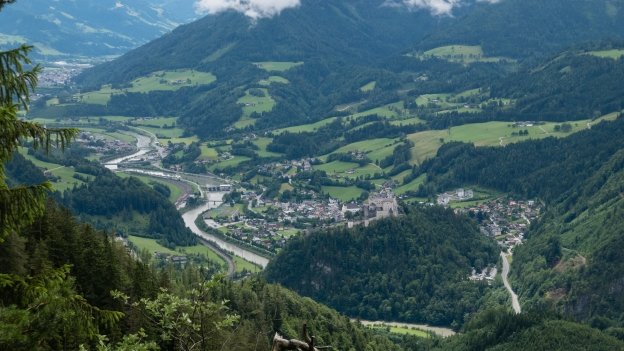 View over Werfen from the path to the Eisriesenwelt

As you approach Werfen, the Burg Hohenwerfen (Hohenwerfen Castle) comes into view. Perched high above the road and river the location could hardly be more dramatic. This is also the highest point of this section of the route. As you head downhill, look out for the turning on the right-hand side where you finally get the chance to turn off the B159, as the route heads through the centre of Werfen and then under the main road. If you miss the turning, you can pick up the route later.

I didn’t visit the Burg Hohenwerfen, but in many ways, it would be as good as the Salzburg castle. There’s lots of inform­ation on the website: salzburg-burgen.at) the official website for the Festung Hohensalzburg, the Burg Hohenwerfen and the Burg Mauterndorf.

The Burg Hohenwerfen also appears in the background of the picnic scene of the Sound of Music, filmed in the Gschwantanger hay meadows high above Werfen. You can walk up there: according to the tourist inform­ation website (werfen.at) ‘With sturdy shoes on their feet, young and old can complete this easy hike in about an hour’.

Werfen’s other main attraction is the Eisriesenwelt (World of the Ice Giants) ice caves (website: eisriesenwelt.at — de/en/it). The cave system extends for 42 kilometres into the Tennengebirge limestone massif. The first kilometre is filled with ice which remains frozen throughout the year. As you enter the caves you are met with a blast of cold air; the cave system acts like a giant chimney: in winter when the air inside the mountain is warmer than outside, cold air is drawn into the caves helping to freeze the ice. In summer the process is reversed with air from outside cooling as it descends the chimney.

The caves with their ice forma­tions are a memorable exper­ience. Lit by a combin­ation of safety lamps and magnesium (I suspect these are mainly for dramatic effect).

To get to them, you have to take a shuttle bus that takes you up to the lift station where a cable car takes you part of the way up the mountain before you continue along a path with some fantastic views over the castle and the valley. You need to allow 3 hours for the visit. The caves open at 8 in the morning with the last admission at 15:00 in low season and 16:00 in July and August. The shuttle bus runs every couple of hours, so check bus times (you can download the timetable from the website). A combined ticket for the caves and the cable car costs €24, although if you’re feeling energetic, you could hike up, this takes 1.5 hours each way. Top tip: if you have a pair of cycling gloves, take them as the railings on the walkways get very cold.

Booking.com pages for places on this section of the route:
Salzburg | Hallein | Golling | Werfen

After Salzburg, the next hostel along the route is the Jugendherberge St. Johann im Pongau

There are a couple of sites on the northern outskirts of Salzburg: the Panorama Camping and the Camping Nord-Sam. To the south-east of the city is the Camping Schloss Aigen.

Close to Hallein, is the Auwirt Camping Looking at the map it seems to be pretty easily accessible from the cycle route, with a stretch of cycleway that enables you to avoid the B159.

A little further on from Werfen and Pfarrwerfen is the Camping Vierthaler. The easiest way to get to it is by riding the cycleway and then crossing the river by the kraftwerk (the turning is signed). It’s a simple, friendly website. Unfortunately, it’s a bit of a hike (6.1 kilometres) from the centre of Werfen — it’s literally a hike as there’s no bus service.

Bike shops along the route 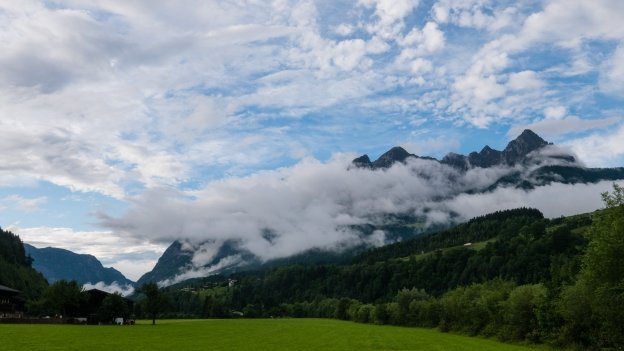 TheTennengebirge (Tennen mountains) seen from the Camping Vierthaler near Pfarrwerfen