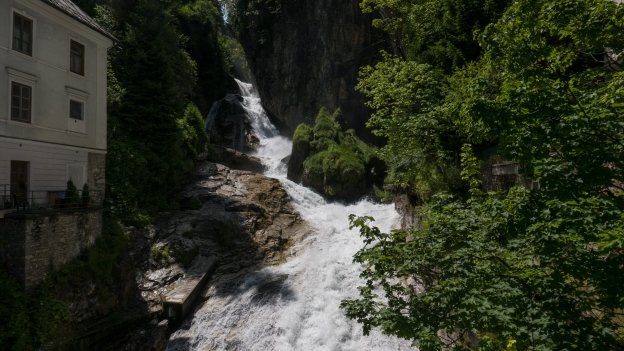 The Gasteiner wasserfall in Badgastein

Easy, although there are a couple of short, but steep-ish, climbs (the climb from Schwarzach to the Klammtunnel, and the climb to the centre of Bad Gastein).

Mixed. A signi­ficant proportion of the route is on compacted-aggregate surfaces.

For part of this section the route coincides with the Tauern Radweg, and it mainly follows the Gasteinertal Radweg through the Gastein valley.

The route goes down through the Markt (main street) of Werfen and then heads for the riverside. The stretch on from Werfen beside the river is wonder­fully peaceful, in comparison to the previous section on the main road.

Coming out of Werfen and there’s an underpass that takes you under the main road. You then turn right immedi­ately before the bridge and go past the swimming pool (schwimmbad).

After a short section of cycleway that runs beside the road (but separated from it by the grass verge), turn left towards Pfarrwerfen. As you go over the bridge, it’s best to pick up the cycleway on the right-hand side of the road.

A beautiful section beside the river brings you into Bischofshofen along the confus­ingly-named Bahnhofstrasse — confusing because it doesn’t seem to lead to the station. You turn left by the Rathaus and rejoin the main road for a brief stretch before going under the railway line and over a bridge over the river. The sign is easy to miss. The frescoes in the little church (Pfarrkirche Zum Heilig Maximillian) are well worth a quick look.

After Bischofshofen the route follows the right bank of the Salzach (looking in the direction the river flows) to Sankt Johann im Pongau. The cycleway is mainly aggregate-surfaced, with stretches of tarmac as you approach each of the kraft­werke (hydro­electric plants) along the river.

Note that there has been a change to the route as it comes into Sankt Johann on Salzachweg: you need to turn right just before the road turns sharp left.

From here you continue following the Tauernradweg towards Schwarzach im Pongau. You pass a fitness park on the outskirts of Sankt Johann if you feel like you haven’t worked hard enough, or you’re in need of a bit of stretching. There’s also a public toilet.

A little further on, the route crosses over a wooden bridge over the river and continues on the left bank of the river (looking in the direction lion the river flows). A bit further on again, about 2.9 kilometres from Schwarzach, there is another bridge which leads to the route to the Liechtensteinklamm 1.7 kilometres away. This looks like it would be one of the highlights of this section of the tour, but, unfor­tu­nately for me, it was closed for the whole of 2017.

The gorge is around 4 km in length of which 1 km is accessible to visitors by means of wooden walkways (closed in winter months). It has a depth of up to 300m and in some places is only a few meters wide. At the end of the gorge is a waterfall.

The Liechtensteinklamm. Picture by ‘Zairon’ CC BY-SA 3.0 via Wikimedia Commons

From Schwarzach to the Klammtunnel

At Schwarzach you have a couple of cycling options, at least in theory. The Ciclovia Alpe Adria Radweg climbs to Oberuntersburg on quiet roads. I was advised by a local person that I could avoid the climb by picking up the Pinzgauer Straße a little after Schwarzach. With the B159 still fresh in my memory, there was no way on earth that I was about to go anywhere near another Austrian main road, even if I had to push all the way up the hill. (A third option would have been to take the train from Schwarzach to Dorfgastein).

The route out of Schwarzach takes you over the railway line. The signs from here are for Lend and Dorfgastein.

The first part of the climb out of Schwarzach is pretty steep — I estimate that it’s about 8 percent — but after the first kilometre or so he gets a lot easier. The climb ends at a reservoir. I had been warned that it was unattractive and, as it seemed to be almost empty, it wasn’t partic­u­larly scenic, but except for the reservoir, this was a beautiful section. As I looked down on the road at the bottom of the valley below, I was glad I’d taken the climbing option

Eventually, after some ups and downs, the road goes under the railway line and brings you out in Klamm beside the Posauner Gasthof. This is the point where the Ciclovia Alpe Adria Radweg parts company from the Tauernradweg: from here the Tauernradweg goes downhill to the right, towards Lend, while the CAAR heads for the Klammtunnnel. Turn left, following the signs for Dorfgastein, 9.3 kilometres further on.

Eventually, the road on the valley-side descends to the main road, and the cycleway that runs beside it. The cycleway leads to the Klammtunnel. In fact, there are two tunnels; there’s a short tunnel, and then just as I was thinking ‘that wasn’t so bad’, I got to the main tunnel. In both tunnels, there is a two-way cycleway on the left-hand side of the tunnel. You are well protected from the traffic behind a concrete wall and steel railings. I’m glad the link is there for cyclists, but even so, it’s a fairly unpleasant exper­ience. My serious advice would be to wear a pair of earplugs (like these: amazon.co.uk: Moldex 6400 earplugs). If that sounds over the top, imagine the noise from a lorry coming at you at 100 kms/hr; then imagine that noise in the confined space of a tunnel. 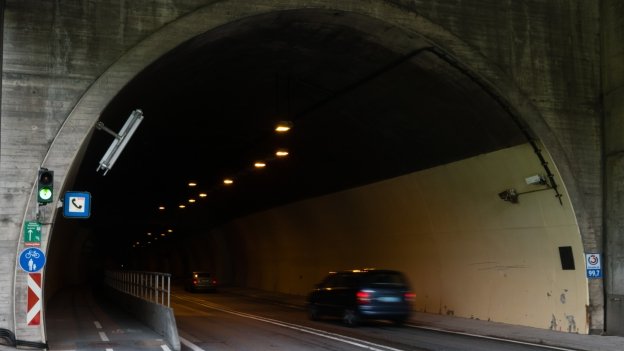 The southern entrance to the Klammtunnel

The main tunnel is 1.6 kilometres long, with a slight incline (about 3 percent). The good news is that the tunnel is pretty well ventilated - when I rode through there was a constant breeze.

If you’d rather avoid the climb, and the tunnel, the official website suggests either taking the train from Schwarzach to Dorfgastein, or using one of the shuttle services offered by local taxi companies. For more inform­ation see alpe-adria-radweg.com: Schwarzach-Dorfgastein.

As you come out of the tunnel, there’s a sign pointing to Dorfgastein. You are now on the Gasteinertal Radweg.

There’s a third tunnel still to come, but, you’ll be pleased to hear that this is exclus­ively for cyclists and pedestrians.

Look for the castle (the Burg Klammstein) above the road on the left-hand side. If you fancy a visit to the castle, the turning is immedi­ately on the left after you exit the tunnel. A little further on, the road takes you through Klammstein where there’s a little gasthaus.

After Klammstein there’s a section of cycleway separated from the road by posts. Things start to look up as the route turns away from the road and goes through Dorfgastein. I thought Dorfgastein (the name means Gastein village) was charming, and easily the nicest of the Gasteins (the others are Bad Hofgastein and Bad Gastein).

From Dorfgastein the cycleway signs are for Bad Hofgastein. The route follows country roads (presumably the old road which once linked these villages before they were bypassed by the new road). The village of Bad Hofgastein has been a little bit spoilt by some insens­itive devel­opment, but the church is worth five minutes of anybody’s time. From here the signs point to Bad Gastein 8.6 kilometres further on.

Coming out of the Hofgastein, there are two options: you can continue straight on following the Gasteinertal Radweg, or you can turn right and follow the official CAAR route. The official route is flatter but less interesting.

You can see Bad Gastein on the valley-side as you approach. The last 1.75 kilometres into the centre of Bad Gastein are fairly steep (8 per cent).

The route takes you past the Nikolauskirche, where, some inter­esting frescoes from the second half of the 15th century are a good excuse to take a breather.

Bad Gastein is famous for its waterfall as the Gasteiner Ache cuts through the town, falling 340 metres in three stages. Apart from the waterfall, there’s not much of interest in the town itself, but if you have the time, you could take the Stubnerkogelbahn which takes you almost 1500 metres up the mountain where a cable bridge takes you to the Glocknerblick Panorama Platform.

As you head out of Bad Gastein, you need to turn right just before you get to the Gemeindeamt (council offices). The road (the Stubnerkogelstraße) takes you under the main road and the railway line, before crossing the river. You continue, following the river sit skirts round Böckstein. Eventually, you comet a junction where you join the main road for the last kilometre to the train tunnel.

To reach the next section of the route you need to take the motorail service through the Tauerntunnel. The tunnel runs for a bit over 8 kilometres under the Hohe Tauern national park. The tunnel’s highest point is 1,226 metres — deep below the peaks of the mountains above.

There didn’t seem to be a ticket office at the Böckstein station; instead, you need to pay at the Auto Kassa booth which is about 200 metres further on. When you have your ticket (cost five euros), you then come back and go to the far end of Gleis 1 (Platform 1) where the carriage for passengers (and bikes) stops.

So far as I know, there’s no system for pre-booking bike places, but there seemed to be plenty of space. 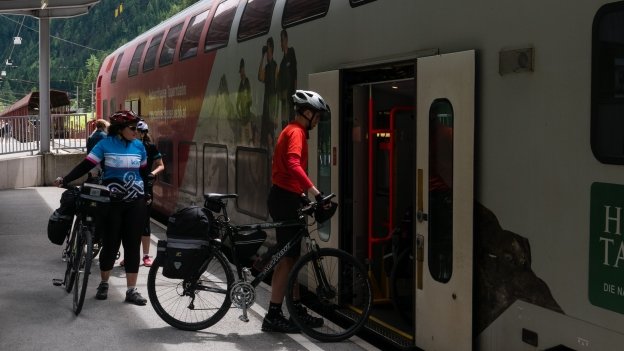 Campsites along this section of the route: