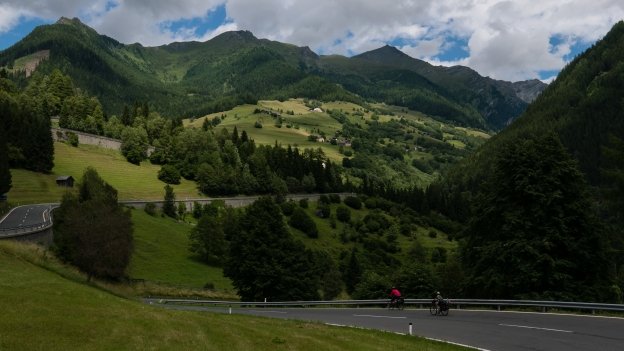 Easy - at least if you are heading north-south, if you are going in the other direction there’s a pretty big climb from Obervellach (670m) to Mallnitz (1183m) — average gradient 7 per cent.

Mainly on traffic-free cycleways, however the descent from Mallnitz is on the road. However, if you wait a few minutes for the cars to set off from the motorail terminal, you should find the road very quiet. There’s also a section of road coming into Spittal am der Drau.

A proportion of the route by the Drau is on compacted-aggregate surfaces.

There are two options coming into Spittal am der Drau.

The route follows existing cycle routes: the Glockner-Radweg R8 between Obervellach and Möllbrücke; the Drauradweg between Möllbrücke and Villach; and the Gailtal Radweg/Tarviser Radweg from Villach to the border with Italy. In Italy it follows the FVG1 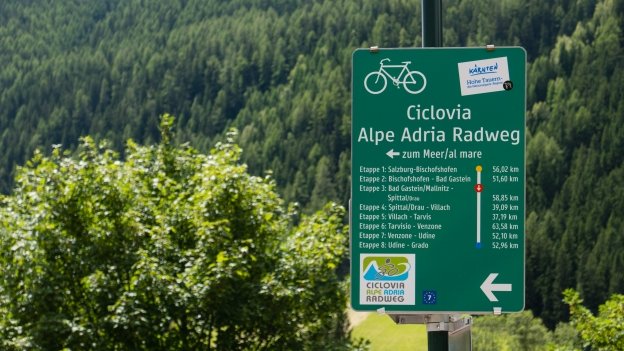 Mallnitz to Spittal am der Drau

The Tauern tunnel takes you from the Salzburg region and into the Kärnten (Carinthia) region.

From Mallnitz (altitude just under 1200m) there is a big descent down into the valley of the Möll river, which flows into the Drau. At the bottom, as you come into Obervellach (altitude just over 700 m), you need to turn left just before you get to the main junction. From here the Ciclovia Alpe Adria Radweg joins the Glockner Radweg (R8) following the signs for Spittal/Drau and Mollbrücke.

The route takes you down the Obervellach’s main street, passing the open-air swimming pool complex, before continuing onto a cycleway that runs beside the main road. As you continue on beside the road, you pass a church going through Stallhofen. Look out for the sign for the Gasthof Burg Falkenstein: above you’ll see the castle itself high on the hillside with a rail bridge beside it.

At Oberdrauburg the Glockner Radweg joins the Drauradweg (R1). From here you continue towards Spittal an der Drau. There are two variants: one takes you into the centre of Spittal, while the other follows the road that leads to the south of the town. This goes right past the Camping Draufluss (also the Gasthaus Drauwirt). The two variants come together again on the outskirts of Spittal before crossing a railway bridge over the river and continuing out of town.

Spittal an der Drau to Villach

Further on from Spittal, the route goes under the motorway and then continues beside it (although the autobahn itself is hidden behind trees). About 9 kilometres from Spittal, the autobahn crosses the Drau, and the cycle route continues on an aggregate-surfaced cycleway on the left bank of the river (looking in the direction the river is flowing) towards Paternion. After about 5 kilometres you come to a dam where you cross over the river. On the other side of the river, there is a small play area, as well as a shelter with an e-bike charging station and a foot pump. The village of Paternion is about 500 metres away.

The signs from here are for Feistritz, and then after Feistritz, for Weißenstein. Look out for the signs for a jausen­station (bar-café) a short way off the route, but worth the detour.

As you head for Weißenstein look out for a big banner across the road with the word ‘Draufahre’, and the turning to a ferry. Ring the bell, and the ferry person comes to pick you up. The fare is 1€ for adults (free for under-18s). I didn’t take the ferry, but on the map, there is a cycleway on the other side of the river, and my guess is that it is in better condition than the cycleway on the right bank. If you take the ferry, you cross back over the river at the Kraftwerk Kellerberg dam. 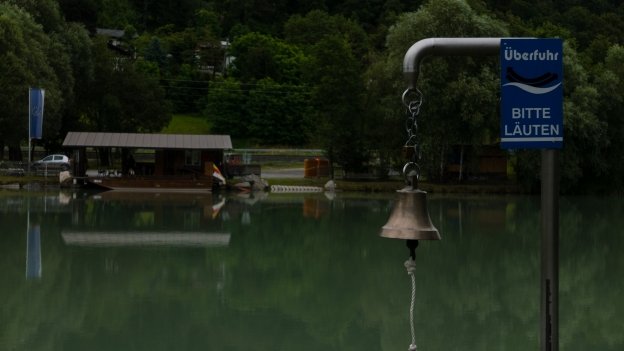 If you continue you the right bank, a little way after the ferry there is a poorly-signed junction where, rather than go right, you cross over a small wooden bridge and then come to another junction with a marble column with the words Weißenstein. From here on, the signs are for Villach. A little further on there is a café (the Café Mosaik) which is right on the cycleway.

A little over five kilometres further on from the Café Mosaik, you come to a bridge where the route crosses the river. To go over the bridge you need to turn right, and then after about hundred metres double back on yourself. From here there’s a section of aggregate-surfaced double track. This is probably the roughest section of the route, although it’s relat­ively easy and free rolling. After a kilometre or so the surface improves. The final section into Villach is beautiful. 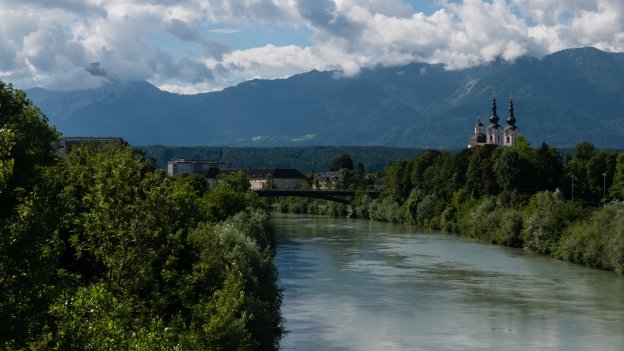 The Drau (Drava) as it passes through Villach

Villach is an important rail junction, and the town was heavily bombed during the Second World War (according to en.wikipedia.org about 42,500 bombs were dropped killing 300 people and damaging 85% of the buildings). If you’re inter­ested in exploring the centre, ask in the tourist inform­ation office for their guide to the altstadt (old town). 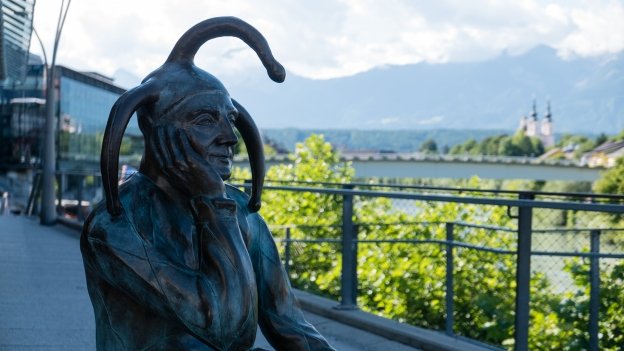 The Ciclovia Alpe Adria Radweg follows the riverside as it continues through Villach. About 3 kilometres from the centre of Villach you come to a striking modern red bridge (the Friedensbrücke) where you turn right, crossing over the Drau. 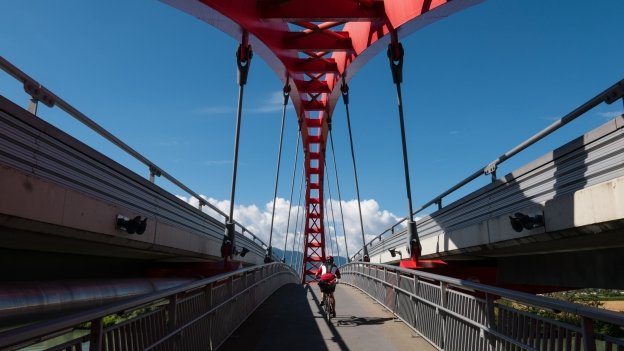 Cyclist-pedes­trian bridge over the Drau (Drava) at Villach

A kilometre and a half from the bridge, the route you’ll see on the other side of the road an out-of-town retail park with a branch of Falle Campingwelt. A little further there’s a set of traffic lights and a junction where the R1B cycle route turns right heading for the Faaker See. Bear left as the cycleway continues beside the river.

From here the route continues, following the Gail river as it heads for the border with Italy. You may find the signs slightly confusing: the main Gailtal Radweg (R3) goes to Hermagor and Mauthen, while the Tarviser Radweg (R3C) turns off further on, and heads for Pockau and then Arnoldstein. 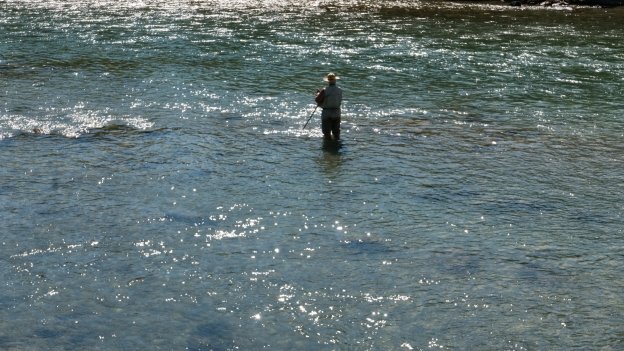 Fishing in the Gail near Villach

The ciclovia starts immedi­ately after the Italian-Austrian border - as you cross the border at the now-deserted check­point, look for a wooden fence on your right-hand side, with Ciclovia Alpe-Adria in big red letters. There’s then a very short but fairly steep climb and then a glorious stretch of cycleway that takes you through the woodland to the village of Coccau di Sotto. There’s a short section beside the main road before you bear right and through the village itself. The main road disap­pears into a 500-metre long tunnel, while the cycle route turns right and crosses over the main road that’s now in the tunnel. It then loops round on a stretch of almost-deserted road, taking you to the other end of the tunnel where the cycleway resumes.

The cycleway takes you into Tarvisio. Before you get there, there’s a junction with the FVG1A that takes you to the border with Slovenija and on from there to Kranjska Gora and Jesenice.

Tarvisio has stations to spare: the modern station is at Tarvisio Boscoverde a couple of kilometres out of town. ‘Bosco verde’ trans­lates as ‘green wood’ and the stations is indeed out of town (there’s a cycleway that takes you there). The main cycleway takes you past the old Tarvisio Centrale station — which doesn’t seem at all central, and then onto the Tarvisio Città station which really is in the heart of town, even if it’s no longer a train station. 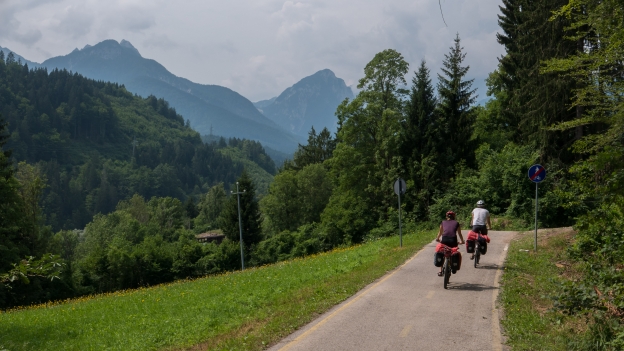 Cyclists on the Ciclovia Alpe-Adria Radweg near the Austrian border

Booking.com pages for places on this section of the route:
Obervellach | Möllbrücke | Spittal an der Drau | Villach | Arnoldstein | Tarvisio

There are no hostels on the route itself, but there is a hostel at Faak am See (the Jugendherberge Faak am See) which is not far from Villach.

There are several campsites on the Austrian section of this route: there’s the Camp Pristavec near Obervellach; the Möllbrücke and the Draufluss.

There are a couple of campsites around Villach: the Camping Gerli and the Camping Seehof.

The bad news is that you have to go all the way to Gemona del Friuli to find the next campsite on the Italian section of the route.

If you need an excuse for a side-trip into Slovenija there are several campsites along the D2 cycle route: the closest is the Natura Eco Camp just outside Kranjska Gora.

There are train stations along the whole route with connec­tions to Salzburg and Wien to the north and Klagenfurt to the east. From Villach, there are train services to Tarvisio and beyond. 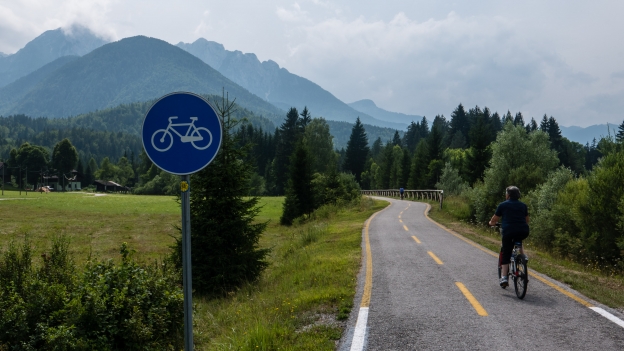 Cyclist on the FVG1A cycleway near the border with Slovenija 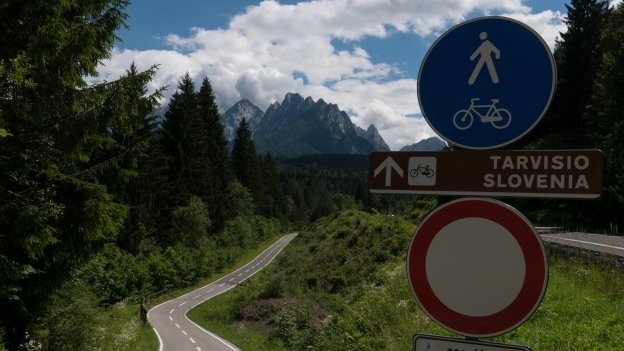