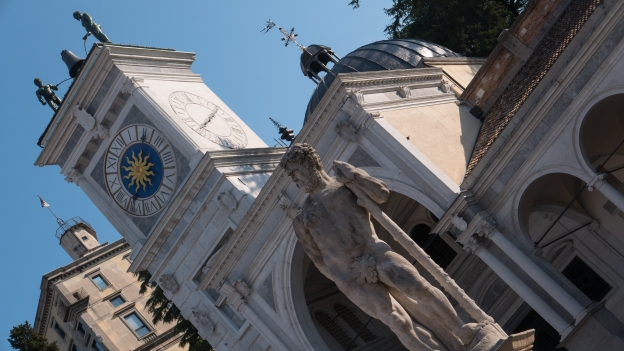 This section is probably the most complicated on the whole route. It is mainly well signed (and the signage is improving)

After Venzone, there are a couple of options. One heads over the river to Pioverno then continues to Braulins before crossing back again. The other takes the cycleway that runs from Venzone to Gemona del Friuli. Opened in 2016, this is another stretch of the old railway line given a new life as a beautiful stretch of high-quality cycleway.

To reach the new cycleway, head out of town head through the southern Porta de Sotto, and take the first left (the Via dei Fossati) and then right onto the Via degli Alpini. Cross over the SS13 and then take the Strada di Scjs as it goes under the railway line. Once you’re past the railway line, take the first left — look out for the brown cycleway sign for Gemona. Initially, it’s a beautiful asphalt lane/track through woods then just before the main road it ducks under the railway and the pista ciclabile proper starts and continues for 2.6 kms. 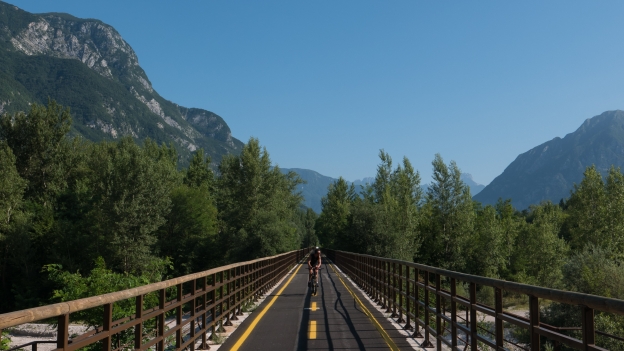 The ciclabile ends at Ospedeletto, from there, if you are in a hurry, you can take the road (the Via Cjamparis) into Gemona, if you’re not, there’s a track that leads to the Lago di Misurini nature reserve. At points the surface is loose gravel, and there are a couple of short, but relat­ively steep climbs - but it’s worth it — honest. You come out on onto the Via Cjamparis on the outskirts of Gemona - look out for the old limekiln on the left, turn right, and there’s another short stretch of cycleway.

If you’re cycle-camping you can stay on the road and continue on to the Ai Pioppi campsite. 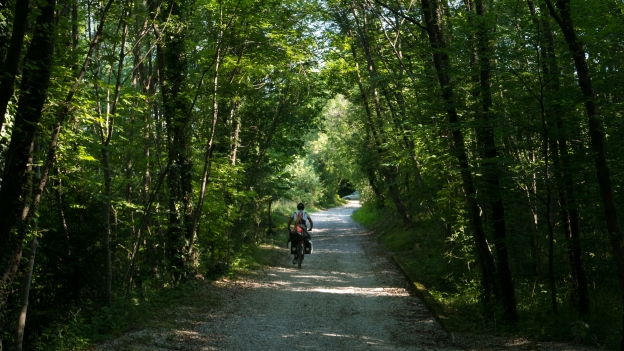 Veneto cyclist on the cycleway between Ospedeletto and Gemona del Friuli

When I rode this pat of the route, there was a sign pointing vaguely in the direction of the centre of Gemona, and nothing else that I could see, so I impro­vised a route. This description is based on the Open Street Map mapping. It seems like a reasonable route, but if you fancy visiting the centre of Gemona del Friuli the OSM mapping shows a a couple of cycle routes that will take you there.

The cycleway proper ends at the hospital. when you come out onto the road by the hospital turn right and then take the next turning on the right (the Via San Pietro) this goes under a road and the railway line before bringing you to the main SS13 where you have to cross over and pick up the Via Braulins.

Continue on the Via Braulins to the riverside where you turn right onto the Via delle Rose. The Via delle Rose goes under the autostrada and comes out onto a quiet road (the Via Porto Carantano/Via Tagliamento) that takes you past the Parco della Colonna and on towards Osoppo.

The route is well signed from here (thanks to the efforts of the local council) — the signs take you through Osoppo where there are bars and places to eat and a hotel (the Hotel Pittis).

The route then follows the course of the Tagliamento river on a bliss­fully quiet strada bianca that takes you through meadows and woodlands.

Eventually you cross over a level crossing and come out onto the strada regionale (SR463) at Rivoli. You need to turn right and then the next left (opposite Simon’s Pub). A tarmac lane takes you to a track which then continues past the depur­atore (water treatment plant), where you turn right onto the Via Gravate which takes you into Tomba where you pick up a cycleway .

After this keep an eye out for a stream (the signs are easy to miss) where you turn left, cross over the SP49 and then ride through an underpass (tall people mind your heads) that takes you under the A23 autostrada.

The route then takes you on towards San Floreano - at this point, you have the altern­ative of a road route or an ippovia (bridle­way/horse-riding route) that is more suited to mountain bikes. I took the road option (this is the route that is described in the official roadbook).

A bike path takes you into Avilla (part of the Comune di Buja). There’s a confusing junction where the signs initially seem to point straight on, left and right. In fact, you need to cross the road, bear slightly left, and then turn right onto a short cycleway that runs beside the road.

There’s a great little bar-ristorante in Buja - the I Primidue Osteria.

This section of the route is inter­esting, but a little bit fiddly. If you don’t mind a bit more traffic, you could take the relat­ively quiet SP49 from Rivoli to Ursinins where you can rejoin the official route.

From Avilla you continue to Ursinins Grande (look out for the church (Santa Maria ad Nives) and Vendoglio, where there are two churches. At the junction turn left, and then at the next junction turn right and then the second on the right after that. 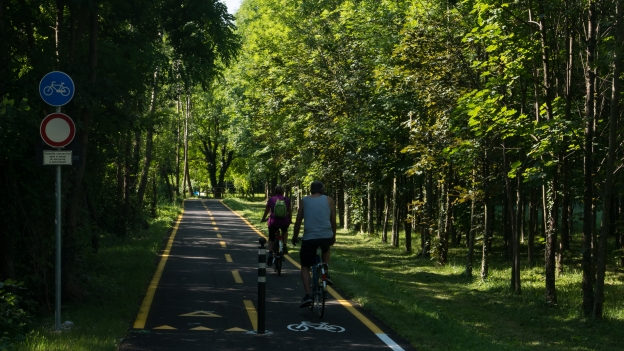 Cyclists on the cycleway between Venzone and Gemona del Friuli

When I rode the route in 2015 the only signs after Treppo were the stickers put up by the volunteer Radweg Angels which weren’t as obvious as the signs on the previous section. This may have changed since then.

The cycle route skirts round Tricesimo before picking up a ciclope­donale that follows the road for most of the way into Tavagnacco. Just outside the centre you leave the cycleway and turn onto a street paved with sanpi­etrini (like cobbles but flatter). This takes you past a church and the Trattoria Al Grop. You then need to cross the road and pick up another ciclope­donale that takes you to a pedes­trian-cyclist bridge over the SS13.

The route then continues, mainly on cycleways, through Feletto Umberto over the SP49 and on towards the A23 autostrada - a short stretch of unsur­faced road takes you under­neath the autostrada. From here the ciclope­donaletakes you into the Parco del Cormor.

After the Parco del Cormor the route into Udine is well signed and fairly straight­forward: once more under the autostrada and then there are bike paths that take you into Udine’s centro storico and the Piazza della Libertà where you can admire the heritage of the Venetian Republic. 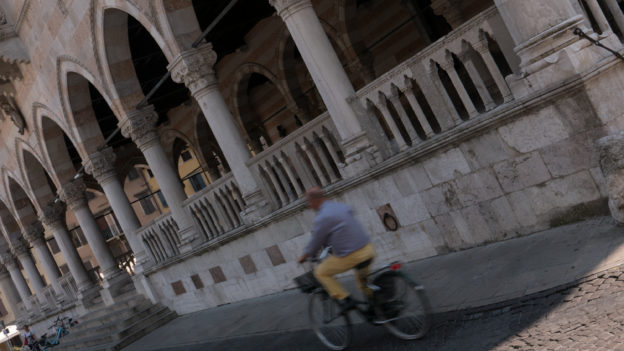 In Udine I stayed at the Hotel Alle Due Palme in Udine, located just outside the old city gates and a 10-minute walk from the Piazza della Libertà. There were cheaper options, but these are further from the centre of town. They have an under­ground garage.

Booking.com pages for places on this section of the route:
Gemona del Friuli | Udine

So far as I know, there are no hostels on this section of the route.

There’s a campsite at Gemona del Friuli: the Camping Ai Pioppi. There are also a couple of campsites at the Lago di Cavazzo: the Camping Val del Lago and the Camping Lago Tre Comuni.

There are train stations at Gemona del Friuli and Udine.

According to the website of the SAF regional bus company (af.ud.it: Biciclette)

Passengers can transport bicycles, excluding tandems, on the extra-urban bus services free of charge. One bike per person, and subject to the amount of available space in the luggage compartment. You must contact the SAF in advance (telephone: +39 0432 602 777, email: info@saf.ud.it), giving your address and a contact phone number. You may only receive the confirm­ation on the day of travel.