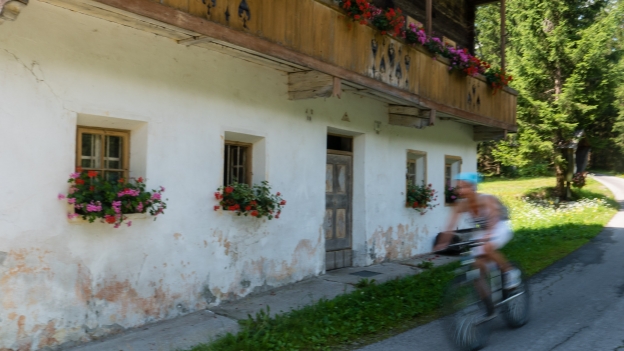 Cyclist on the Drauradweg (Ciclabile della Drava) between Toblach and Lienz

Easy. Downhill from Toblach to Lienz (with a couple of short climbs) then flat from Lienz to Villach.

Mixed - mainly tarmac-surfaced cycleway or road, but there are some shortish sections of unsur­faced track. 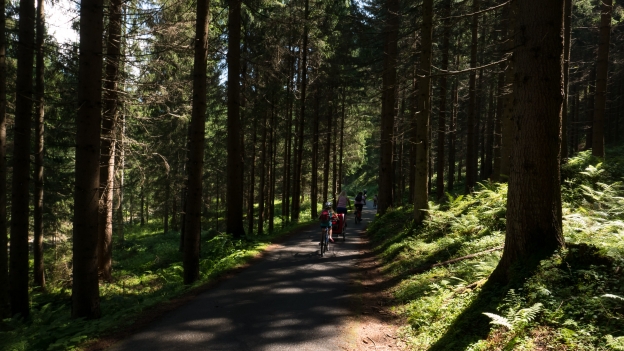 Cyclists on the Drauradweg (Ciclabile della Drava) between Toblach and Lienz

The Drauradweg (Ciclabile della Drava) starts at Toblach station. The section from Toblach is very popular with people making the day ride on hire bikes. Quite possibly this is Italy’s busiest cycleway. It’s easy to see why it’s so popular: beautiful scenery, traffic-free, downhill pretty much all the way and a well-organised hire bike system that means that at the end of the ride you can drop your bike off and catch the train back.

As you come into Innichen (San Candido) look out for the Altöttinger Kapelle (Altöttinger Chapel) with its wood-shingled roof. The town developed around the monastery estab­lished in the eighth century. The cycleway takes you around the centre of Innichen which is under­standable, given the number of cyclists, but a pity. You can of course always get off your bike and walk through the pedes­trian centre. 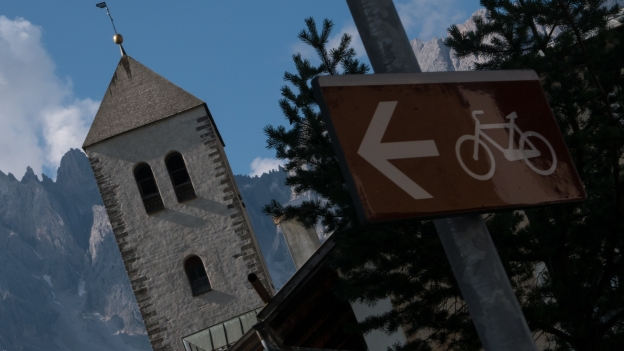 After Innichen the cycleway heads for the the border with Austria. There’s little to mark the border apart from the fact that the cycleway signs change. There are a couple of bars/cafes on the route itself, and the lots more not far away, as well as a few water fountains. If you’ve been in Italy for a while you may find it a shock to pay€1.80 for an espresso (in Italy the price is rarely more than a euro).

The route continues through woodlands to Lienz. At Lienz it goes to the station and then from there out of town – there’s a short section of pavement cycleway and then a closed road beside the river on the left bank. 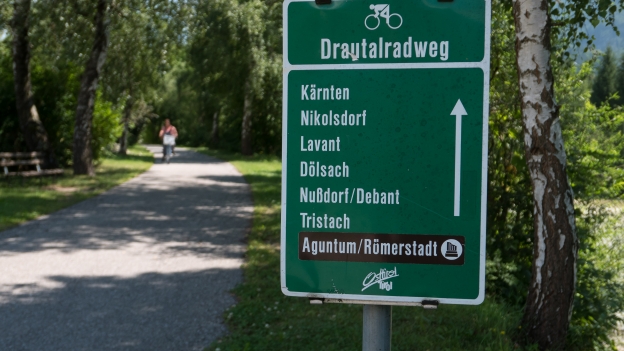 Most people seemed to stop at Lienz and the cycle route from here is a lot quieter. It’s more of a classic river-side cycleway – relat­ively flat and straight with dramatic views of the mountains looming above to the south.

Tarmac gives way to aggregate as the cycleway continues beside the rail line. It’s very well-made, smooth, aggregate surface though. This section takes you across a wooden bridge and into Kärnten (Carinthia). You pick up the tarmac again coming into the village of Unterpirkach and from here the route continues quiet roads into Oberdrauburg. Oberdrauburg has an attractive centre with a hotel and couple of bars/restaurants, tucked away on out of sight on the other side of the main DrauTal Straße. 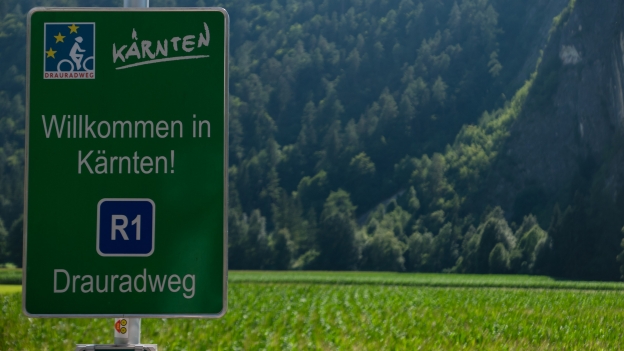 At Oberdrauburg there’s a short stretch on busier road before you turn right and pick up the cycle route again. The route follows a quiet road, then ducks under a bridge, which is then followed by unsur­faced cycleway which takes you almost all the way to Dellach im Drau, about 8 kilometres further on, where you cross the Drau. 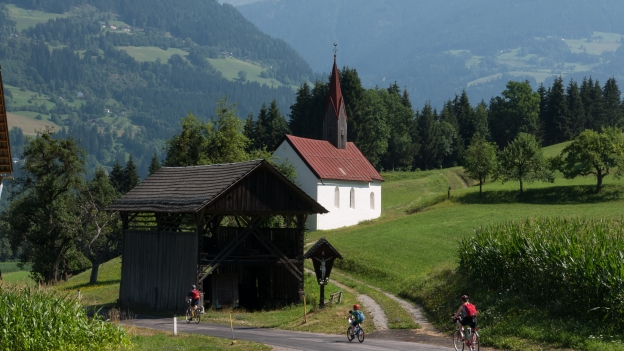 A tarmac cycleway takes you through woodland to Feistritz where there’s the Radlerstation Sandhof if you’re looking for somewhere to eat or drink - or somewhere to stay the night.

Bear right at the Radlerstation Sandhof on to the Amlachemstraße - a quiet local road that takes you to Bruggen (where there’s another bar). For me, this section through woodland and alpine villages, was one of the most enjoyable of the route. Although it’s mainly on roads, these are very quiet with more cyclists than cars . 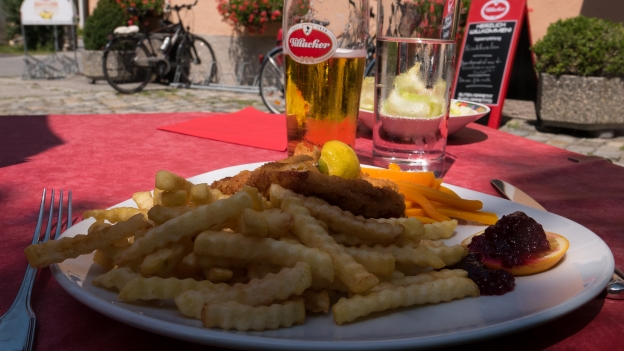 I stopped for lunch at the Gasthof Funder in Linden im Drautal. It’s a popular stop for cyclists on the route. The next place to eat is at Sachsenberg 7 kilometres further on.

You continue on quiet roads towards Lendorf. Just before Lendorf the route comes out onto a road, where the signs indicate two options: one to go via Lendorf and the other to go via Baldramsdorf. 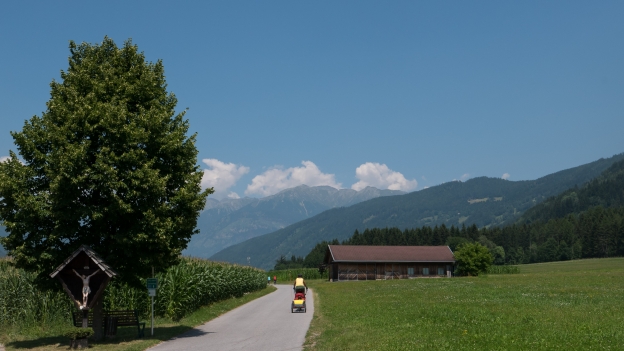 The Lensdorf option goes into the centre of Spittal an der Drau and to the station, but unless you want to go into Spittal, the Baldramsdorf option is probably the better choice. The road (the Baldramsdorferstraßer and the Landestraße) crosses the river and comes into Spittal from the south-east. (It passes in front of the Draufluß campsite and gasthaus).

I took the Lensdorf option which goes into Lensdorf on a short stretch of cycleway followed by an underpass - from there you double back and round onto a pavement cycleway for a short stretch of the road before turning off again onto quiet road. The route then crosses under the A10 autobahn and the main B100 road. the cycleway runs alongside the main road into turning off and dropping down into Spittal.

At Lensdorf there’s a junction with the R9A cycle route - so if you see other cyclists heading off on a parallel road it doesn’t (neces­sarily) mean you are going the wrong way.

From Lensdorf, the Drauradweg coincides with the Ciclovia Alpe-Adria Radweg all the way to Villach.

Hotels and B&Bs along the route

Campsites on the route