The last section of the eurovelo 8 cycle route takes you from Torino via the cities of Saluzzo and Cuneo to the border with France at the Col de Tende. This section is primarily on surfaced, quiet roads. It is also very largely flat until you get to the final climb towards the border where you need to climb to an altitude of 1868 metres.

The route continues on following the left bank of the Po until, near the city of Saluzzo, you cross over the river and pick up the via Pedemontana Alpina as it heads south. You could make a detour the source of the Po on the Pian del Re (2,022 m).

The official route shown on the bicitalia website stops at Sanfront. The most logical and obvious candidate for the continu­ation to Cuneo is the Via Pedemontana Alpina cycle route. This route, a mixture of cycleways and very quiet roads meets the Po cycleway near Revello. 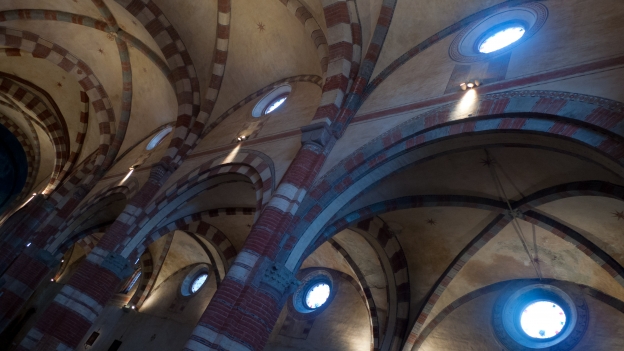 The Abbazia Staffarda is an abbey built by the Cistercian order who believed in a simple and austere archi­tecture. The founder of the order wrote:

“ The Church…..dresses its stones in gold and it abandons its children naked. It serves the eyes of the rich at the expense of the poor. The curious find that which may delight them, but those in need do not find that which should sustain them. ”

The Abbazia’s church is a fine example of the aesthetic with minimal surface decor­ation but at the same time it uses the material to add pattern and visual interest. 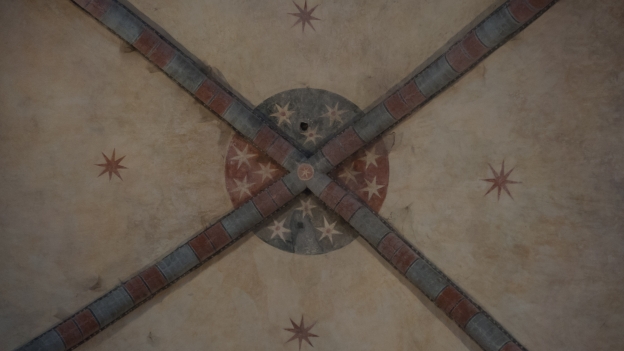 Saluzzo and the Castello della Manta

Saluzzo, for four centuries capital of an independent marchesato is one of the many smaller Italian cities that deserve to be better known.

Near to the is the Castello della Manta the Castello is an absolute jewel. It was left to the FAI (Fondo Ambiente Italiano - equivalent to the UK’s National Trust) who have painstak­ingly restored it. It’s most notable for the frescoes in the Sala Baronale - one of the greatest master­pieces of secular art to come down to us from the Middle Ages.

On one side of the sala is the fresco of the fountain of youth (fontana della giovinezza) - which depicts the legend that of a fountain which would make old people young again. The fresco shows old people of all social ranks - from the king in a covered wagon escorted by his courtiers and others arriving on the back of a mule or in a handcart). The newly rejuvenated emerge to embrace and enjoy the pleasures of life. 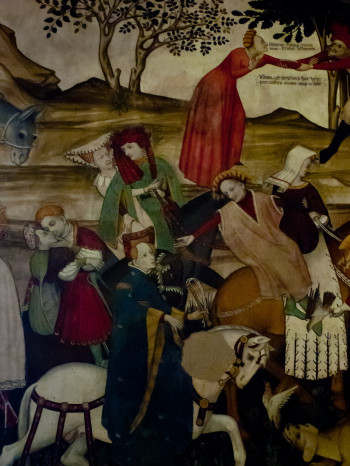 Castello della Manta: detail from the fontana della giovinezza (fountain of youth) fresco showing the newly-rejuvenated old people, fresh from bathing in the fountain, enjoying a new lease on life

On the other wall are the Eroi ed Eroine: the 18 figures from history and mythology inspired by a poem written by Tommaso III di Saluzzo (Thomas III de Saluces).

Don’t miss the frescoes in the castle’s chapel.

There are still a few more treats in store as the Via Pedemontana takes you to the Occitan city of Dronero. Most famous for the Ponte del Diavolo (devil’s bridge) one of three extraordinary feats of medieval engineers that was immedi­ately attributed to the work of the devil. 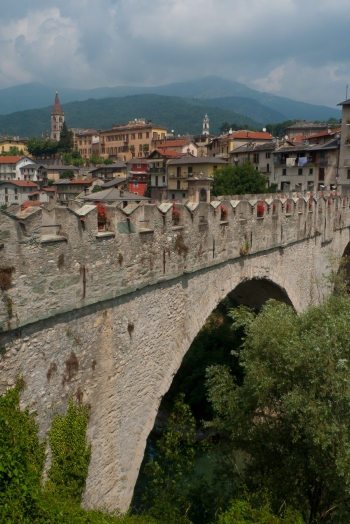 Last city on the way to France is Cuneo

The connection with France

After Cuneo the eurovelo 8 heads for the border with France. It’s important to note that bikes are banned from the road tunnel that is the main crossing point over the border. On the Italian side, there’s a surfaced road that takes you almost all of the way to the top (1867m). After that, there’s about 7.5 kilometres of gravelly switch­backs on the French side before you regain the main road. The altitude difference is 600 metres so the descent is fairly steep. It’s a dramatic and very scenic route: do a Google Image Search for ‘Col de Tende’ and you’ll find lots of pictures. There are also lots of videos on youtube. With a fully-loaded bike and the loose surface it could be a bit of a little tricky. The Valley on the other side is known in French as the Vallée de Merveilles which looks like it would defin­itely reward you for your hard work.

Map and altitude profile: from Cuneo to France

If you don’t fancy the climb it is possible to take the train from Limone Piemonte (or from one of the stations before if you prefer). However, and I hate being the bearer of bad news, the service on the line has been reduced to two trains a day with the train leaving Limone at 8:27 in the morning. For background see La Strano Caso della Ferrovia Ventimiglia-Cuneo-Nizza. The under­lying cause of the cuts in the service is the need to make repairs on the line that will cost 27 million euros. Hopefully, the issue will be resolved and the services eventually reinstated, but sadly I suspect this will probably take some time.

And while I’m raining on your parade, if you’re travelling April or May don’t forget to take into account that, although it’s not very high, the pass may not yet be open.

If you are heading for France you might want to consider taking the Bicitalia Svizzera-Mare from Casale Monferrato. This would mean missing Torino (although you do it as a detour) but this route takes you through the charming cities of Asti, Bra and Alba.   Map:  show map in overlay    |    show map in new window

Another connection with France you might want to consider is the Colle della Lombarda (2350m) which connects Vinadio in the Valle Stura with Isola in France (via the ski resort of Isola 2000). From there you’re about a day’s ride from Nice. On the Italian side it’s a 21-kilometre climb from Vinadio, with an average gradient of 6.7 per cent. On the French side, it’s also a 21-kilometre climb with a gradient of 6.9%. While the col is higher than the Col de Tende, the climb is on surfaced roads. I haven’t done this route, but from Google Streetview it looks like a quiet, scenic option and probably the least problematic of the crossing points in the area. 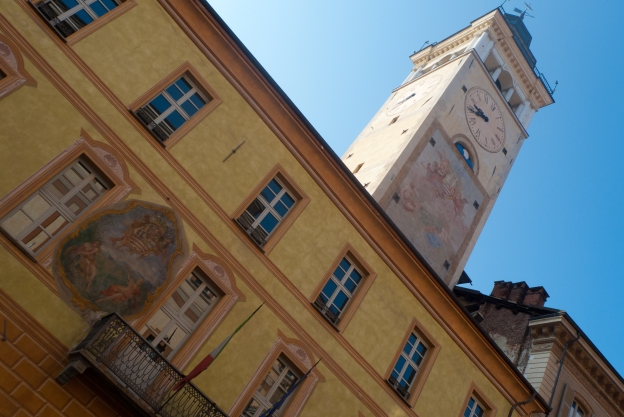 Decorated building façades in the centre of Cuneo (Piemonte)

There are four campsites along the final section of the route

After Torino there are three hostels along the way - one near Saluzzo and a couple near Cuneo:

There may also be a hostel in Saluzzo (the Ostello del Po).