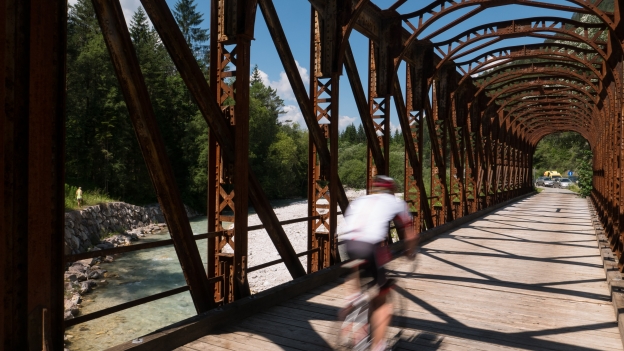 Cyclist on a bridge on the D2 cycleway near Mojstrana

Mostly on traffic-free cycleways and quiet roads. There are a couple of short sections of busier road.

Entirely on surfaced roads or cycleways

The sections of cycleway are well signed but after this you are reliant on the normal road signs which are very easy to follow. 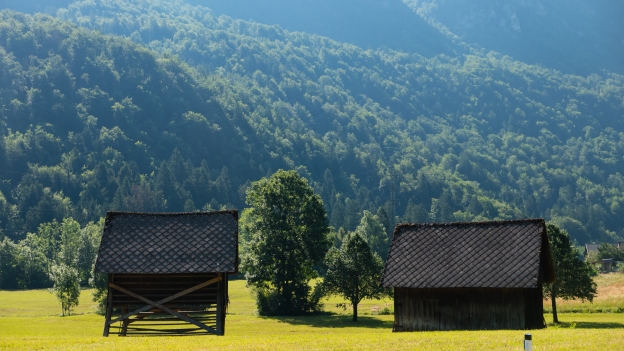 This section of the route takes you on a beautiful cycleway through the forest to the Italy-Slovenija border, which connects with another premier cycleway which follows the old railway line into Kranjska Gora and then Jesenice. From Jesenice it follows mainly quiet roads into the town of Radovljica with its medieval city centre. After Radovljica it heads for Bled and then to Bohinjska Bistrica where a final stretch of cycleway takes you to the Bohinjsko jezero (Lake Bohinj).

Instead of crossing the river to Slovenski Javornik, an altern­ative option would be to stay on the road number 634 as it goes under the A2 motorway and then south via Kocna to Bled. The 634 takes you past the turning that leads to the Vintgar Gorge (soteska Vintgar). 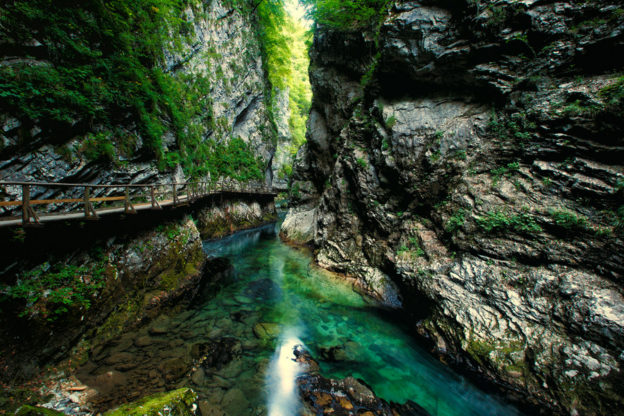 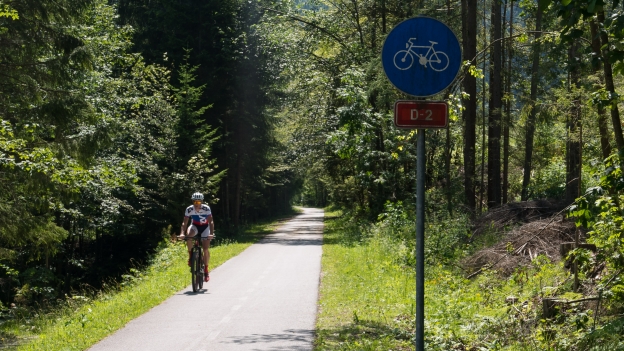 Cyclists on the D2 cycleway near Kranjska Gora

The tour starts at the rail station at Tarvisio Boscoverde. There’s a short stretch of cycle lane before you join the FVG1A cycleway. The cycleway is built on an old railway line and takes you to the border a little under 9 kilometres away. The cycleway initially runs through a forest of pine trees that give way to alpine meadows surrounded by the pale limestone mountains. 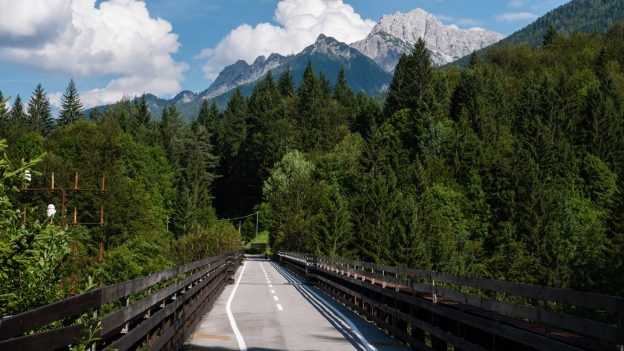 The FVG1 cycleway near Tarvisio

At the border you continue on the D2 cycleway into Kranjska Gora, and through the village’s pretty, traffic-free centre. There’s a short section on quiet roads before another long traffic-free section to Mojstrana. Look out for the kozolci (hayracks) used for drying hay that are so charac­ter­istic of the Slovene landscape.

The D2 cycle route continues to the outskirts of Jesenice. I continued on past Jesenice and then crossed the river further on and went into Slovenski Javornik. From here there’s a short stretch on the main road to Žirovnica where you can turn off onto the scenic 638 road which leads through a series of lovely villages. 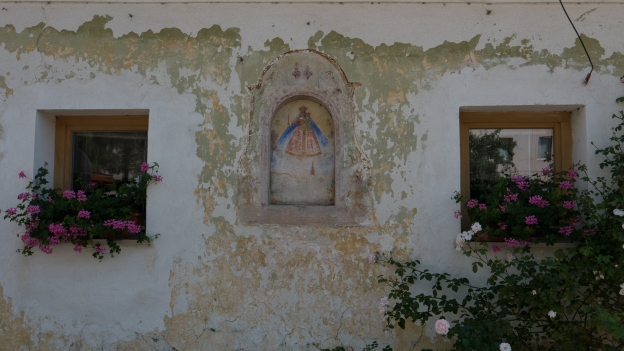 I turned off just before Polijče which was a mistake as I should have continued on into Begunje na Gorenjskem with its 17th century Grad Kacen&#353tajn (Katzenstein Castle) slovenia.info | en.wikipedia.org. The castle has a grim history: before the second World War it was a women’s prison, then during the war it became a Gestapo prison. The castle is now used as a psychi­atric hospital but it also houses the Muzej talcev (Museum of Hostages) which commem­orates the partisan fighters and other prisoners who were held here. In the park next door there’s a cemetery for those who died here.

On a more cheerful note, Begunje is perhaps more famous for being the home town of Slavko Avsenik and Vilko Ovsenik who formed the Ansambel Bratov Avsenik (Avsenik Brothers Ensemble). You can listen to their biggest hit Na Golici (Trumpet Echoes) on youtube (link opens in overlay). If that doesn’t put a spring in your step then you should check whether you still have a pulse.

The route takes you into Linhartov Trg (Linhart Square) in Radovljica’s old town. 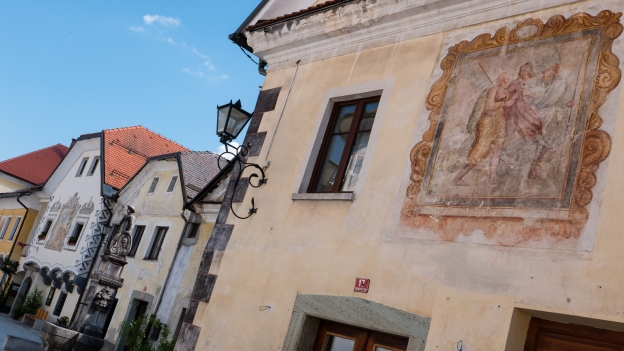 From Radovljica there’s a cycleway that takes you pretty much all the way into Bled. At Bled I took the road that follows the south side of the lake.

Bled is one of Slovenia’s top tourist tourist destin­a­tions, and Bled castle one of its most popular attrac­tions. The road offers great views of the lake and the Blejski Grad (Bled Castle) and Bled Island with the ‘Church on the island’ (Cerkev Marijinega vnebovzetja). The town itself has suffered a bit from unsym­pathetic tourist devel­opment - although you can still get a sense of past grandeur. 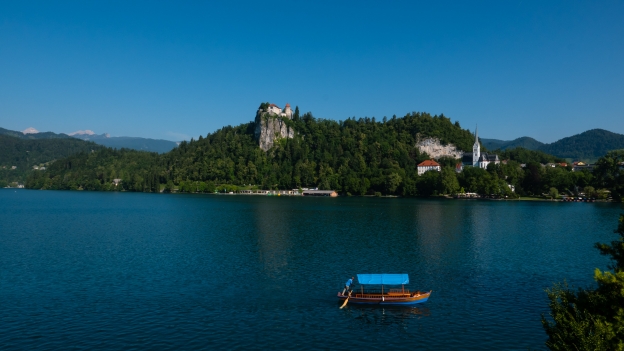 Coming out of Bled there’s a 2-kilometre stretch on the Bohinj-Bled road (the Savska Cesta - 209) before you can turn off onto the bliss­fully quiet road for Bohinska Bela. Another couple of kilometres further on and its time to rejoin the 209 road as it continues into Bohinj following the Sava Bohinjka river.

At Bohinjska Bistrica there’s a beautiful cycleway that takes you the 6 kilometres to the Bohinjsko Jezero lake. You can pick up the cycleway as it passes the Kamp Dahinca campsite and then crosses the river. The starting point for the cycleway is actually before you get to Bohinjska Bistrica - turn right off the the Savska Cesta just before it crosses the river. Either way look for the big blue kolesarska pot (‘bicycle path’) sign. 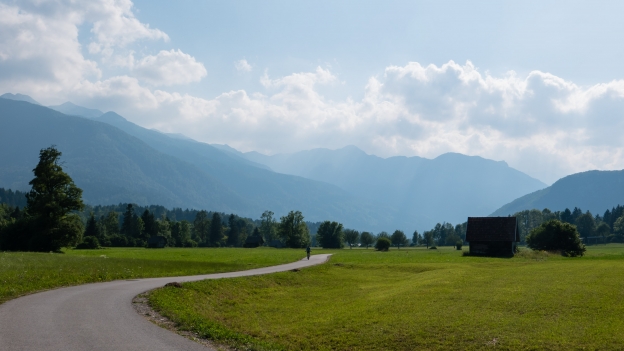 Cyclist on the Kolesarsko Pot Bohinj cycleway near Bohinjska Bistrica

Apart from the lake itself the major attraction at the lake is the Cerkev Sveti Janez (Church of St John the Baptist). Don’t miss the church’s beautiful frescoes.

On the outer wall of the church is a fresco of Saint Christopher. Saint Christopher is the patron saint of travellers and it was thought that seeing an image of him would ward off misfortune for the rest of the day. You’ll find frescoes of him on churches across the whole arc of the Alps —and there’s another beautiful one further on along the lakeside road on the Cerkev Sveti Duh (Church of the Holy Spirit). 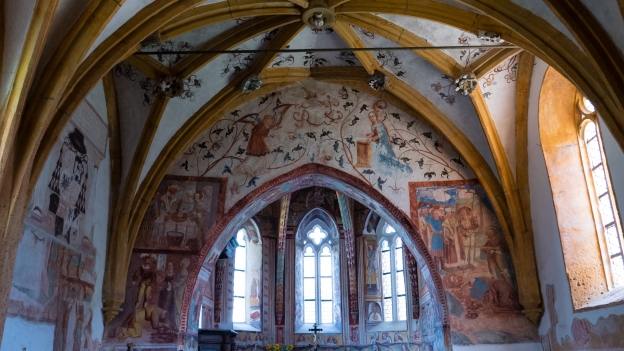 Tarvisio is relat­ively expensive - you may well find cheaper options at Valbruna or Fusine — including the Locanda dei Mandi and the Albergo Al Sole in Fusine Val Romana, and the Albergo Edelweiss at the Lago di Fusine

There are lots of hotels along the Slovenian section of the route, in Kranjska Gora, Radovljica, Bled and Bohinj.

When it comes to hostels you have plenty choice:

Unfortunately there are no campsites at Tarvisio (there’s a Sosta Camper for campervans but it has no washing or toilet facil­ities). There is a campsite close to Kranjska Gora (the Natura Eco Camp)and another couple (the Kamp Špik and the Camping Kamne) along the D2 cycleway. Further on there’s also the Perun Lipce on the other side of the river.

I stayed at the Camping Šobec name near Radovljica but while it’s a very nice site, but if you’re just staying for one night then the Camping Radovljica in Radovljica itself might be a more convenient option.

The Camping Bled is on the Bled jezero (Lake Bled) on the other side of the lake from the town of Bled.

I also stayed at the Camp Danica at Bohinj Bistrica which has an excellent restaurant (probably the best meal I had in Slovenija). There’s also the Kamp Zlatorog Bohinj at the Bohinjsko jezero (Lake Bohinj). The Danica is a few kilometres from the lake, but that means that there’s less far to travel the next day.

There is a train line from Jesenice via Bled and Bohinjska Bistrica to Most Na Soci at the southern end of the Soča valley.

For more inform­ation about resources for planning a tour in this area pleas see: Crossing borders: cycle routes between Italy, Slovenija and Austria on this site. 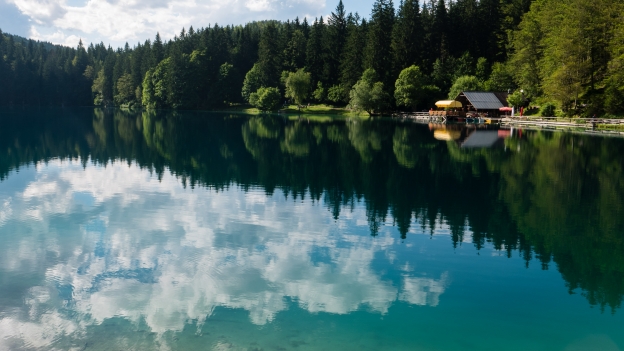