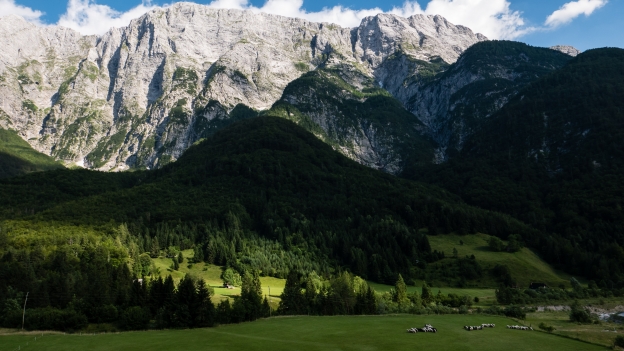 Challenging. This section has two signi­ficant climbs with gradients approaching ten per cent. 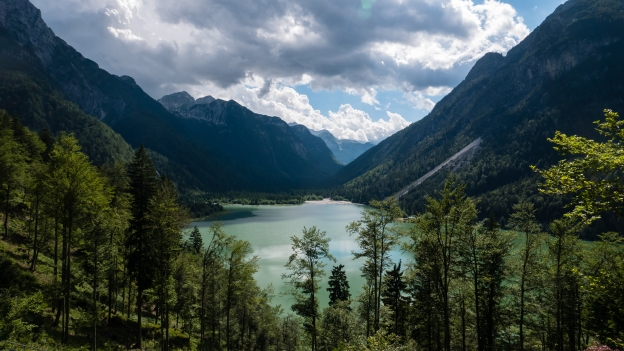 The Lago del Predil - descending from the border

This section starts and finishes at Bovec climbing into the Triglavski Narodni national park and the heart of the the Julian Alps before descending to the beautiful Lago del Predil and Tarvisio. From Tarvisio there’s a relaxed cruise through dramatic scenery along one of Italy’s best cycleways. The route leaves the cycleway at Chiusaforte and climbs back up, to the Lago del Predil and returns to Bovec.

The mountains are defin­itely the star of the show for this section, but there’s also another gorgeous lake (the Lago del Predil), and cycleways really don’t get much better than the FVG1 as it follows the old railway line to Chiusaforte.

If you don’t think this is challenging enough there are a couple of options.

The first option is to take the road that leads via Trenta to the prelaz Vr&#353ič (1611m) before descending to Kranjska Gora. You can then head for Tarvisio and Chiusaforte from there (en.wikipedia.org: Vr&#353ič Pass).

The second option is a side-trip to the Mangartsko sedlo (Mangart Saddle) (wikipedia.org: Mangart Saddle). The road starts just before the passo del Predil and climbs to 2,055 metres (the saddle is Slovenia’s highest road). If you fancy the climb there’s a refuge near the top where you might be able to stay the night (see the places to stay section below).

You could also continue on from Chiusaforte on the FVG1 cycleway which forms part of the Ciclovia Alpe Adria Radweg that takes you to Grado on the Adriatic Coast. 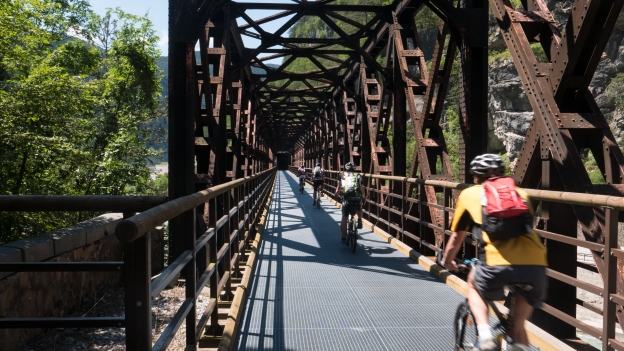 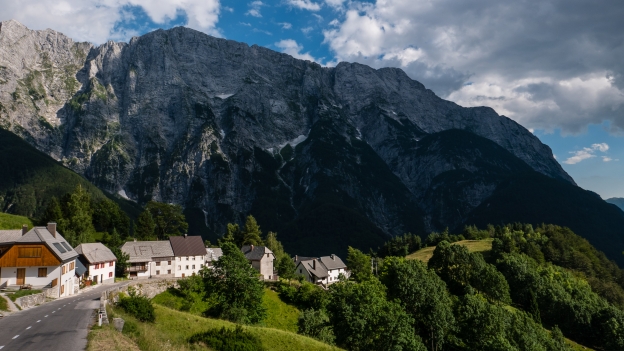 From Bovec the route heads into the Triglavski Narodni national park (sl/de/en) The road climbs to the Trdnjava Kluže a First World War fortress controlling a narrow river gorge above the Koritnica river. 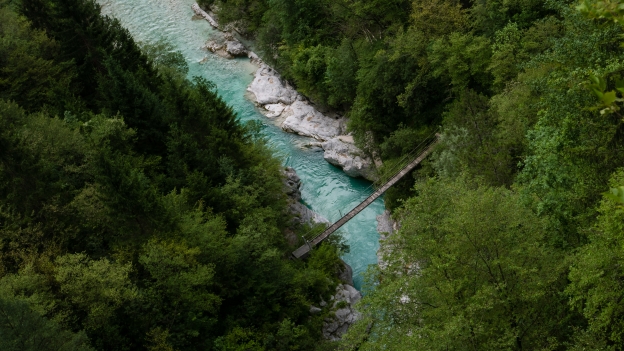 Bridge over the Soča river seen from the Trdnava Kluže

The road continues, following the Koritnica river to the village of Log Pod Mangartom (650m) — 6 kilometres on from the Kluže. Next door to the village cemetery is a First World War cemetery: buried here are over 800 soldiers from the 4th Bosnian-Herzegovinian Infantry Regiment including 102 Bosnian Muslim soldiers whose graves are marked with ni&#353an, Islamic grave markers. There’s also a statue by Czech sculptor Ladislav Korfanek. It shows two soldiers: one is the mountain sharp­shooter, who covers his eyes from the sun with his hand, and the other is a Bosnian-Herzegovinian soldier wearing a fez.

Also in Log Pod Mangartom look out for the Kaiser Franz Josef I Hilfsstollen, the entrance to an under­ground tunnel —more about this later.

From Log Pod Mangartom , the road starts to climb in earnest to the Passo del Predil. On the way is the village of Strmec Na Predelu (975m), where you can catch your breath (a little) and enjoy the view down the valley towards Log Pod Mangartom. Looking up the valley you can see the remains to the Pass-Sperre Predil fort that once guarded the historic trade route. The fort marked the frontier of the Venetian republic, but after its fall to Napoleon it passed into the hands of the Austrians. At the fort there’s a memorial to the Austrian soldiers who fought to defend the pass in 1809 before being overwhelmed by the French forces. 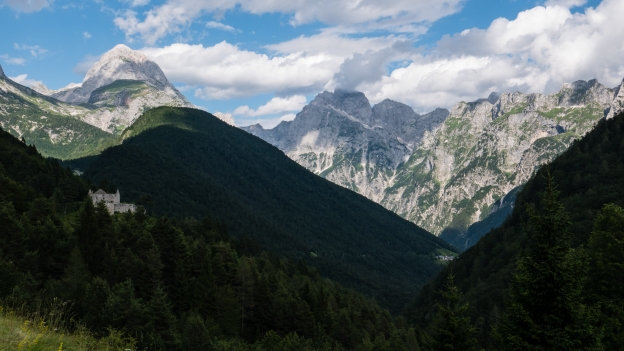 The border with Italy is a little way further on from the fort. There’s a restaurant/B&B and an appar­ently-deserted border check­point and that’s about it. From the border the road descends down to the Lago del Predil - another gorgeous emerald-green alpine lake surrounded by mountains.As you come down towards the lake there’s a short, unlit, tunnel. It’s not so much of a problem if you are descending, but lights are still an essential. There’s not much in the way of facil­ities at the lake - some picnic tables, and a kiosk bar-ristorante.

Continuing on from the lake you head towards Cave del Predil - the Predil mines (originally known as Raibl). As you head for the village look out for the Cinque Punte mountain - a mountain with five peaks. The Raibl mine produced zinc and lead. The first written records date back to 1320 and it closed in 1991.

If you remember the tunnel entrance in Log Pod Mangartom - this is linked to Cave del Predil by a tunnel that is almost 5 kilometres long. The tunnel played a key part in the battle of Caporetto - it was used by the Austrians to bring 90,000 troops, and a quarter of a million tons of supplies, into the Soča alley undetected by the Italians.

During the Cold War there was a border post in the tunnel.

The tunnel from Cave del Predil to Log Pod Mangartom is part of a network of 120 kilometres of tunnels that extend 520 metres below the village and 450 metres above. 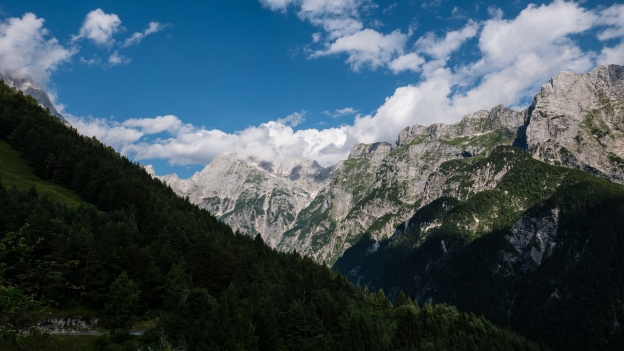 There’s a mining museum in the village (Polo Museale di Cave del Predil or turismofvg.it: Raibl geo-mineral park ) and you can also visit the workings and take an under­ground train ride.

As well as the mine, the village has a huge modern church that towers over the original village church. There are a couple of bars, but otherwise it feels unnat­urally quiet —which isn’t surprising as the population of the village has declined from 2100 inhab­itants in 1968 to 400 today.

The road continues, following the Rio Lago, into Tarvisio. 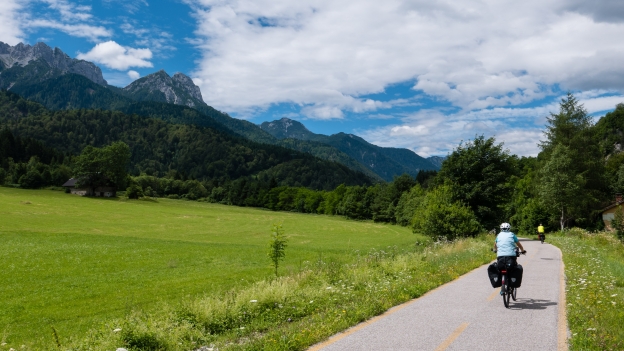 Cyclists on the FVG1 cycleway near Ugovizza

At Tarvisio you pick up the traffic-free FVG1 cycleway again - this time heading south-west following the Fella river. The cycleway is built on the old railway line which became redundant with the construction of the new line through the valley. There are a series of dramatic bridges and viaducts along the way. There are also a fair number of tunnels, most are lit, but for some reason there are one or two longer ones that are unlit. Lights are a good idea not only so oncoming cyclists know you’re there but also because, cycling in the pitch dark is very disorientating.

The cycleway climbs gently to Camporosso (803m) before starting a long downhill cruise to Chiusaforte (386m) 32 kilometres further on.

The route leaves the railway line as it passes through the village of Pontebba. The bridge at Pontebba was the pre-1918 border between Austria and Italy and there are a couple of milestones marking the old border and the distances to Klagenfurt. On the bridge itself are some flower boxes (for want of a better description). They include music and lyrics of songs written in Furlan (Friulian) by local composer Arturo Zachari. One of the boxes has the music and lyrics of the first verse of his best-known piece - Stelutis Alpinis (edelweiss), written during the Grande Guerra. 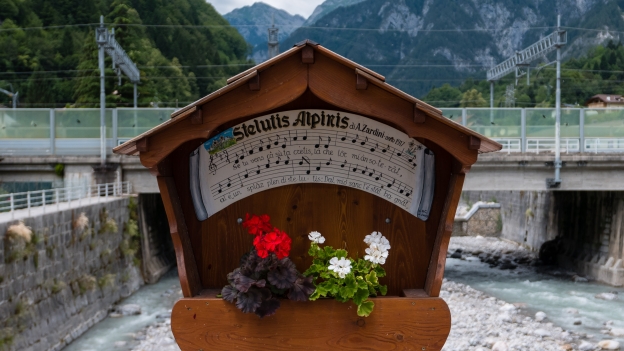 The first verse of Stelutis Alpinis by Arturo Zardini

The song has become both an anti-war song, and a hymn of the Alpini - the army regiment that has become a national insti­tution. The singer Francesco Gregori has recorded a fine version (  youtube.com: Francesco Gregori-Stelutis Alpina), but there’s also a beautiful version, recorded on a rainy mountain top, by a student choir from Milano (  youtube.com: Stellutis Alpina - Coro Capitano Grandi) (sung in Friulian with subtitles in Italian) . You can find the lyrics (in Italian) here: coromarmolada.it: Stelutis alpina.

New sections of cycleway have been opened in the last couple of years, meaning that the cycleway from Tarvisio is continuous almost until you get to Pontebba. After Pontebba there’s a section of tunnel that hasn’t (yet?) been restored so you have to walk down a short steep ramp and then take the road for a short section before pushing back up another ramp to rejoin the cycleway. After that, the cycleway is continuous into Chiusaforte.

At Chiusaforte the old station has been converted into a bar-ristorante the Stazione di Chiusaforte (facebook.com: Stazione di Chiusaforte). The stazione is a popular stop for cyclists on the route. While you’re there check out the exhib­ition of photo­graphs about the construction of the old railway line - it’s well worth a stop to get a sense of the physical scale of the viaducts on the cycleway, as well as a sense of the scale of the achievement of the construction itself - especially when much of the work was done without machinery. 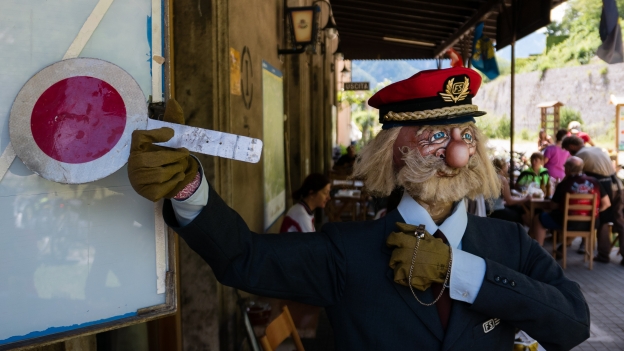 At Chiusaforte it’s time to leave the cycleway and to start climbing again, taking the SP76 through the Val Raccolana following the Torrente Raccolana —another lovely emerald-green river. The valley is sparsely populated and the road is very quiet. It continues, climbing gently for 11kms until you get to a small bar-ristorante (the Trattoria Fontanon di Goriude —highly recommended).

Look out for a waterfall (the Fontanon di Goriude) on the hillside above the road on your right-hand side as you near the trattoria. Just after the trattoria, on the bend in the road, is a sculpture marking the passing of the Giro d’Italia. The sculpture also marks the start point of the path that leads to the fontanon - it’s an easy walk that takes five minutes or so. You can walk under­neath the waterfall itself. The water comes from deep under­ground and the year-round temper­ature is 9 degrees centigrade. 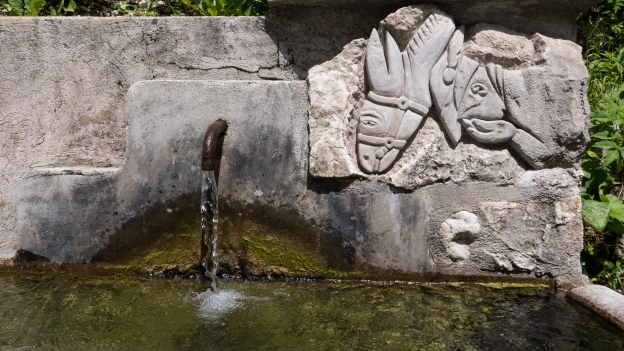 Drinking water fountain on the road to the Sella Nevea

From here on the road starts to climb in earnest to the ski resort at Sella Nevea (the gradient for the 6.8 kilometres is a shade under 10 per cent). There’s then a great descent, following the Rio del Lago, down to the Lago del Predil, where the route rejoins the SS54 on the way back to the border and the Passo del Predil just over 3 kilometres away (altitude gain a little under 200 metres).

There’s a pretty nasty tunnel on the climb to the Passo del Predil. It’s not partic­u­larly long (240 metres or so) but it’s unlit, and there’s a sharp bend at the end closest to the lake. On top of all that there’s a gradient: going towards the lake you can whizz through it, but heading the other way it’s uphill. Good lights are essential Trust me, as you listen to the sound of a RV behind you approaching that corner you really don’t want to be thinking ‘I wish I had put my lights on’.

From the pass it’s another cruise down to the Mangart viaduct and from here on to Log Pod Mangartom, Bovec and Kobarid. 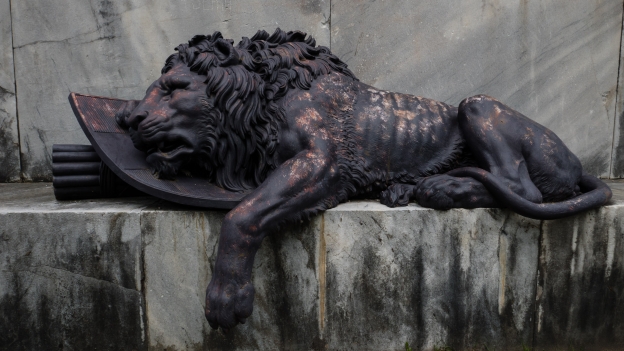 Memorial to Austrian soldiers who died defending the pass in 1809

Tarvisio is relat­ively expensive - you may well find cheaper options at Valbruna or Fusine — including the Locanda dei Mandi and the Albergo Al Sole in Fusine Val Romana, and the Albergo Edelweiss at the Lago di Fusine. There are quite a few reasonably-priced accom­mod­ation options at Pontebba. There’s a small hotel in Chiusaforte and a couple of B&Bs - ask in the bar at the Vecchia Stazione for inform­ation about accom­mod­ation in and around Chiusaforte.

There’s a mountain hut near the top of the road to the Mangart saddle Koča na Mangrtskem sedlu.

There are two hostels in Bovec:Hostel Soča Rocks and hostel-bovec.si:. As well as two others further on at Kobarid and Tolmin: Hostel Paradiso (Tolmin) and X-Point (Kobarid)

The Kamp Polovnik is the most convenient for Bovec. There several sites around Bovec these are by the river and not very handy for the town itself. The Prijon Sport Center is further on from Bovec on the riverside at Čezsoča.

Apart from Tarvisio Boscoverde there are stations at Ugovizza and Pontebba. The cycleway goes past both of them. 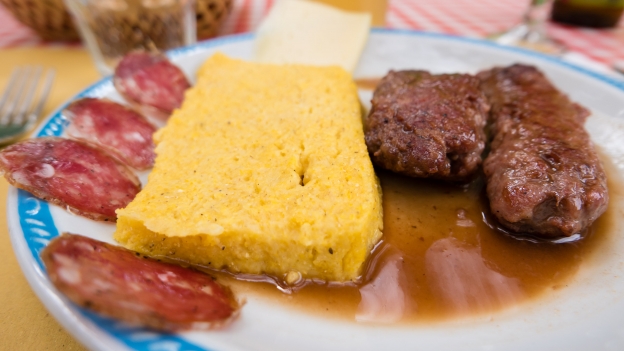